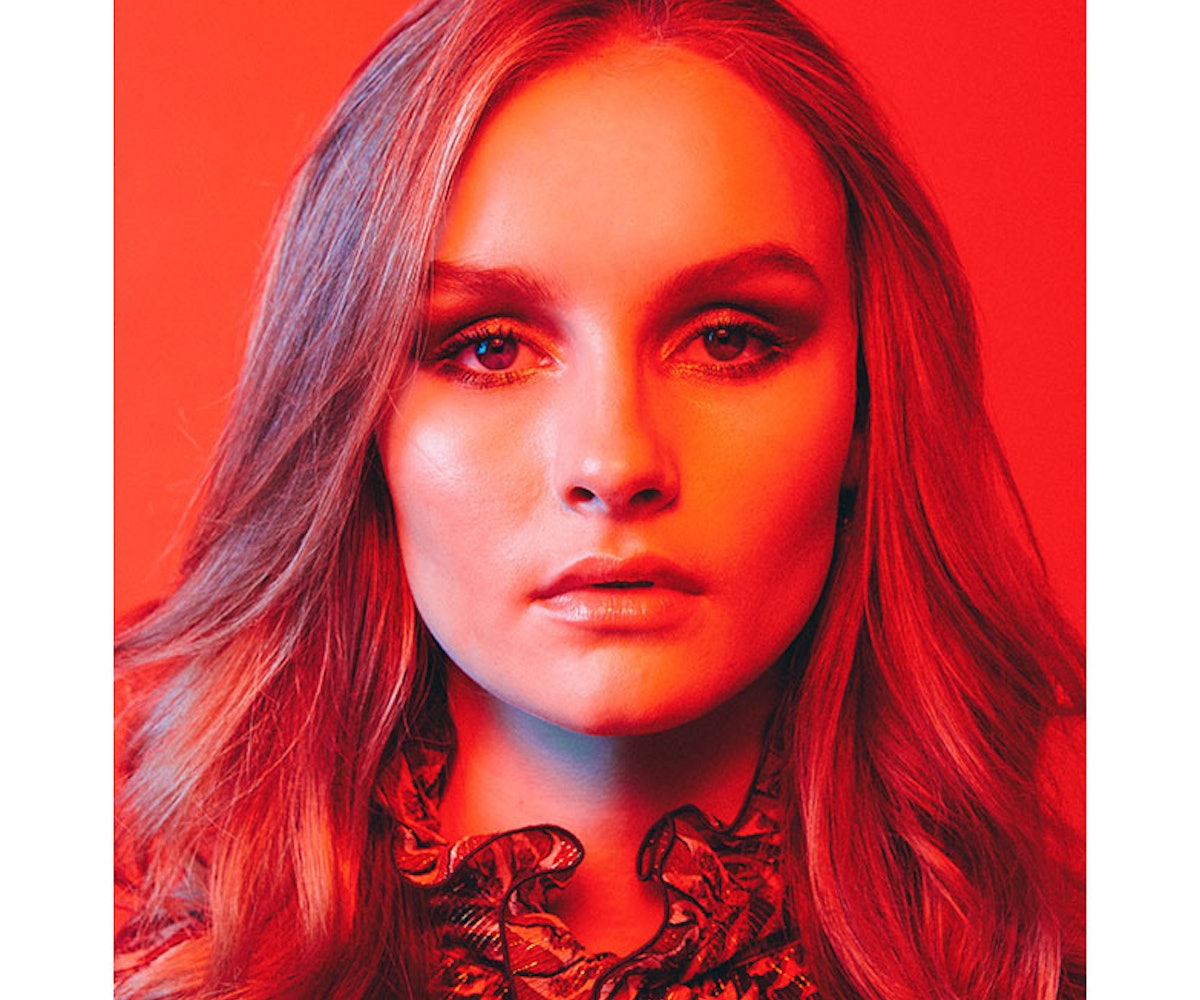 "What a piece of work is woman." Nineteen-year-old actress and Australian import Olivia DeJonge probably wouldn’t have gotten that reference around this time last year, finding the works of Shakespeare snooze-worthy—as do many of her contemporaries. But DeJonge developed a new appreciation for the Bard once she was transported into his world thanks to starring in TNT’s new series Will, a live-wire drama that reimagines the early adulthood of William Shakespeare, portraying him as a punk rock poet, as rebellious as he is romantic.

DeJonge portrays the apple of his eye, a theater hopeful named Alice, bristling under the rigid social expectations of the era. For the actress, first introduced to American audiences as one of the terrified children in M. Night Shyamalan’s The Visit, immersing herself in Shakespeare’s time and place revealed how much of her own life she could see in Alice’s. It turns out, you’ve got to travel back four centuries to realize just how little things have changed.

Idling on the fire escape of NYLON’s New York studio, watching SoHo bustle a few stories down, DeJonge chatted like any other teenager: earnest, eager, hungry to learn and do more. She spoke candidly about warming up to history’s greatest dramaturge, squeezing into a bodice, and what she misses most about Australia. (Spoiler alert: It has to do with the food.)

Going into Will, what was your relationship with Shakespeare’s works?Can I be honest? Before I read the script, I wasn’t interested, because I didn’t like Shakespeare. At all. Thought he was boring and dusty. But it wasn’t until I read the script and spoke to [creator] Craig [Pearce] and [director] Shekhar [Kapur], and listened to them explain the idea behind it, that I was like, “This is different.” I figured if it could change my opinion on Shakespeare, it could probably change anyone’s. When I read it in school, I didn’t understand the language. It’s not until you strip back the fear of not understanding, and genuinely give it a try, that you can appreciate its beauty. You can bring that idea into everyday life, too! Politics, organized religion—it all seems unknowable until you take the time to really study it.

The writing on the show kind of splits the difference between proper Shakespearean English and modern-day vernacular. The main thing to get out of the first few episodes is that you’re brought back to the 16th century, but it stays just modern enough to allow you to see yourself in it. It’s a bit more accessible that way. It’s easier to see yourself in a completely different world if you’ve got something to identify with.

It’s really just a story about a guy thirsty for a girl. That’s timeless! Basically! He’s thirsty for life, as well—doing shows, being in the theater—it makes him feel alive. He’s just another 20-year-old guy, he’s Will. The William Shakespeare of today isn’t rich or born into it, he’d be some random person walking down there. Well, maybe not in SoHo. Probably in Brooklyn, but you get my point.

We think of Shakespeare as stuffy, highbrow writing, but the show understands that his plays were intended as popular entertainment for the unwashed masses.Life was shorter then, people lived for the moment, and he wrote to entertain people. That’s all they had at the time. Pop stars do the same thing now. I love it.

Is that a general rule, that you take projects you would go see yourself?Yeah, but there’s more to it than that. I started in this industry when I was really young because it fulfilled me. I don’t have to be acting—I could just as easily go back to uni and get a desk job if I wanted to. I feel like I’m young, and I’ve got choices, so I should only choose to do things that I want to do.

Performing Shakespeare is kind of regarded as the great test of an actor’s skill. Do you ever see yourself tackling that?Doing Shakespeare scares me. Petrifies me. So many words! I’m not theater-trained at all, and a lot of the boys on Will were, so they knew what they were talking about. I’m ashamed to say this, but I hadn’t even seen a play by the time I got in. Like most other young people, I wasn’t interested in Shakespeare. But that changed when we went to the Globe—they rebuilt a model for our set, but we went to the real one. Everyone was freaking out, and I was like, “This is cool.”

The bodice—was that as uncomfortable as it looks?One hundred percent. Once you wear the corset for long enough, it starts to warm up. They’re made out of bone, so at first, you can’t move, you’re stuck in. But over time, it gets used to you and gains in flexibility a little. I can move forward, uh, an inch. Eating is a hassle. But the period dress is beautiful, the costumes are incredible. Definitely worth the pain to stay true to the time.

I saw you in a film about teenage witches, The Sisterhood of Night, a couple years ago. Could you tell us a little about that experience?That was my first real movie; I was 14 when I did that! Practically a fetus child. It was great, though—a cast of women, written by women, directed by women, produced by women. I was very lucky. It was nice to have the girl power idea there in place so early in my career, all thanks to feminist trailblazers.

Who’s a famous person that you’d like to meet?Natalie Portman. I just saw Jackie, and she was so amazing. Her performance was so nuanced. I love when you watch someone and you can tell that everything they’re doing isn’t thought of in advance, just natural and spontaneous. She embodies the role, and that freed her up to take a lot of risks.

As you’re moving forward in your career, have you set any benchmarks for your own success?I’ll know success has come my way when I’m able to bring a project that I’m really passionate about off the ground or find it some kind of support it wouldn’t have gotten otherwise. I feel like the industry plays it safe a lot of the time, but there are times when it tries something different, and it pays off—I’d love to be someone who can help something like Moonlight happen. The film industry, for a whole lot of people, is about making money. And franchise films make a lot of money. It’s up to everyday people, people who are starting out in their career, to get behind projects that mean something. Movies might be entertainment, but just like with Will, art is a way to understand the time we're living in.

What do you see as the major differences between life Down Under and being elsewhere?It’s a different culture. Australia’s a lot younger. I mean, the country itself hasn’t been established for all that long. We don’t have 400 or 500 years of history, like Britain. Australia feels more laid-back because we’re separated from industry; the Australian film industry is a lot smaller and a lot newer. I was lucky to have surrounded myself in Australia with people who were there for each other. My best friend is an actress, as well, and we support one another genuinely and wholeheartedly. I haven’t found that over here in the States yet, but I haven’t been here that long.

What’s the first thing you do when you get back to Australia after having been away working for a long stretch of time?I lay on my couch, and my dog comes and jumps in my lap. I pet him, and me and my family watch TV. My mom’s made sweet corn, like, corn on the cob, my favorite. We’ll all laugh and enjoy sitting outside, probably invite my best friend over and have a barbecue. It’d be great.

As an Australian, you’re getting dangerously close to cliché by talking about barbecuing in an interview, “shrimp on the barbie” and all that.I know, I know. As soon as I said it, I thought, This is going to sound very corny. But I’m talking about corn, so...

NEXT UP
Fashion
Nylon Fit Picks: Olivia Rodrigo in Y2K Fendi, Alexa Demie at Balenciaga, and More
Beauty
Olivia Cooke’s Beauty Evolution, From Indie Ingenue to ‘House Of The Dragon’ Queen
Life
NYLON Daily Newsletter: October 5, 2022
Beauty
Tumblr’s Coquette Aesthetic Is Taking Over Beauty — How To Get The Look