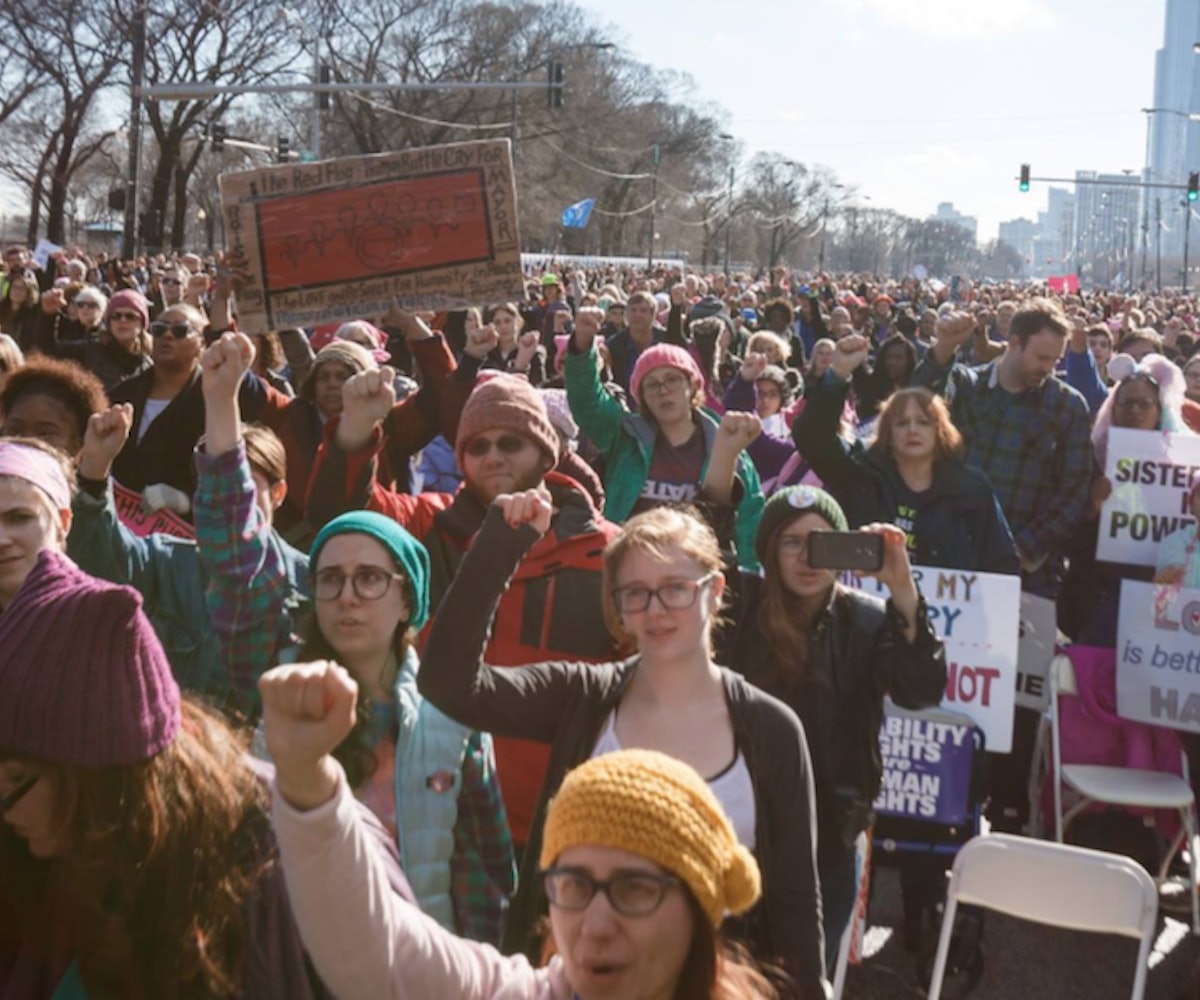 There's a lot going on today: It's the first anniversary of Trump's inauguration. The United States government has just officially shut down. It's the first anniversary of the Women's March, and thousands of people around the world are taking to the streets again today to protest the president's harmful policies towards women and female-identifying people, not to mention his shameful, destructive, and demeaning misogyny. This weekend is also marking the launch of "Operating Marching Orders," a new campaign created by the organization March On to help crowdsource a political agenda and ultimately push for real political change.

March On is an organization that branched off from the Women's March to focus on getting people to the polls and (hopefully) winning elections in 2018 and 2020. The organization wants to harness the energy and enthusiasm created by the 2017 marches, but needs to develop a cohesive and focused political agenda that local communities, organizations, and supporters can use to demand change on a local and national level.

That's where Operation Marching Orders comes in: As reported by Mashable, users can access the interactive Pol.is poll to agree, disagree, or pass on proposed value statements, in addition to suggesting their own. To which you might think, how can anything get accomplished with that kind of open-ended floodgate, and how soon until trolls take over? However, the platform is more than just a survey or Reddit-style anything-goes message board. The data will be analyzed via an algorithm that can pull out the nuances of what the common values are, what issues are most important, and where opinions differ.

Mashable also reports that, importantly, statements submitted by users will be heavily moderated for duplication and trolling. After the poll closes on February 4th, March On leadership will review the data and use the results to create its "declaration for the future," which will serve as the organization's platform going forward. According to their website:

March On will use this platform when making endorsements to make sure that all candidates we support are aligned with our values and principles. March On leadership will also consider this platform its marching orders and will direct the organization to fight for the issues and priorities identified through this exercise.

In order for Operation Marching Orders to really take the temperature of the movement, it needs a diverse range of participants—that is, this polling exercise has to be intersectional AF. It's unclear what the organization has done to reach participants of color, the LGBTQ community, and other marginalized communities, as their feelings and beliefs will be essential in creating an agenda that is truly progressive and inclusive. It's also unclear what they will do in the span of time between the "declaration for the future" and the November elections to galvanize people to help with voter registrations, canvassing, and participating in other activities essential to generating a high voter turnout.

Still, there is a lot of energy in the United States and millions of people who want to participate in change. March On could certainly be the factor needed to cultivate and channel this energy and willingness into making a real impact, but it will require a more cohesive and concrete set of plans and actions over the next few months in order to get anything done.