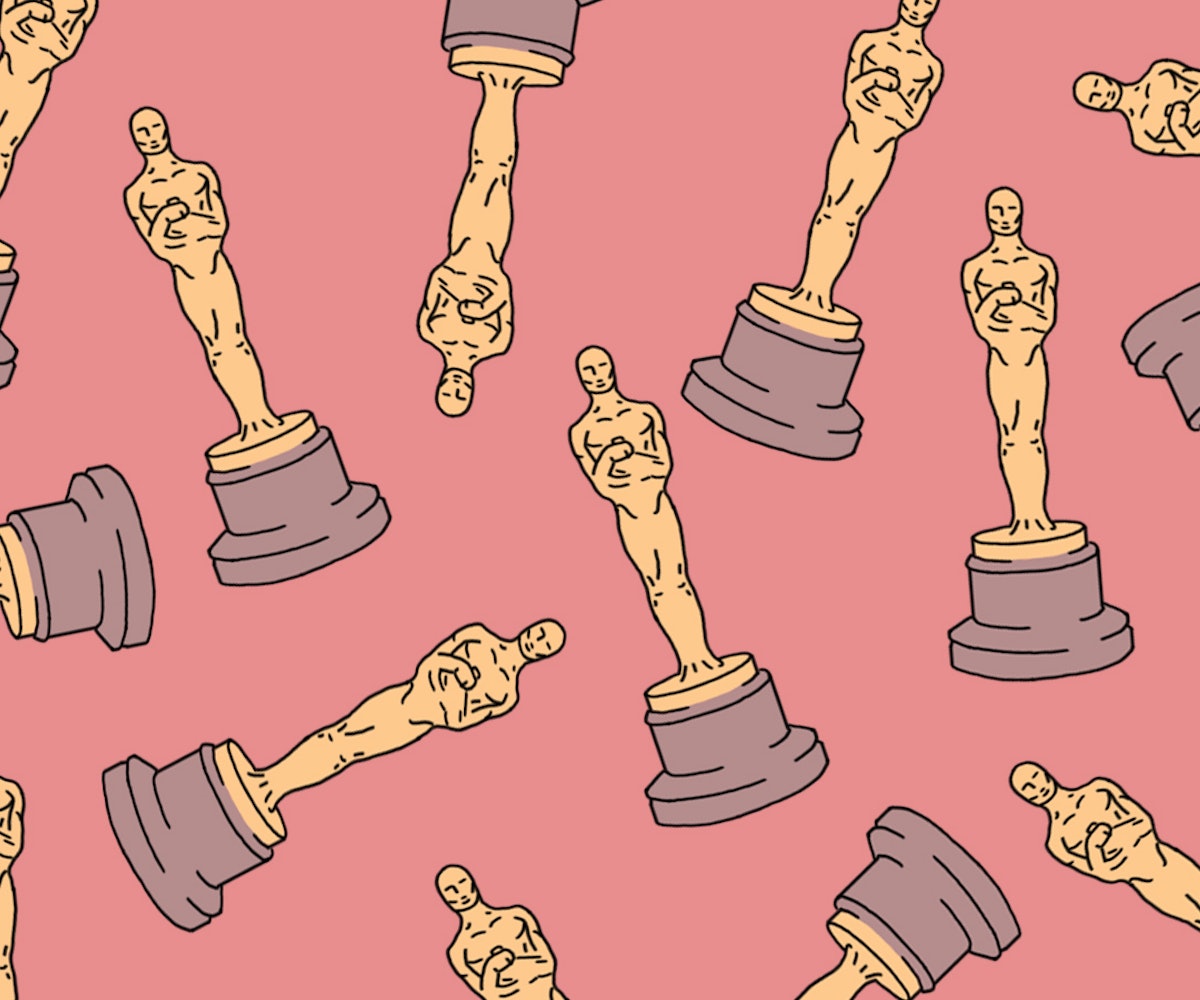 The 89th Annual Academy Awards are taking place this Sunday, and while some of the categories have too-close-to-call races (Best Actor is totally a toss-up with Denzel Washington now looking to be a likely upset over Casey Affleck), others seem like they've been preordained. Such is the case with rom-com juggernaut La La Land, which is the safe bet for this year's Best Picture winner. And while we think it's pretty cool that the story of La La Land can be told through Carly Rae Jepsen's Emotion, we also think that Moonlight is not only the best film of this year, but also the best of any year in recent memory, and if it doesn't win (which, we're already trying to prepare ourselves for the fact that it won't), that will really suck.

It will suck, but it won't be without precedent. Because the fact is that over the many decades of Oscar Best Picture winners, some films that have won have been great, and others have... not. Here then is a list of all the Best Picture winners of the last 50 years, ranked by whether or not they were truly the best, or were, you know, Crash.

1) The Silence of the Lambs (1991): What doesn't this movie have, really? It's got a taut script, iconic performances, suspense and horror in spades, an exquisite soundtrack, and more quotable lines per minute than just about any film ever. It's proof positive that popular appeal does not mean a movie isn't also potentially perfect.

2) One Flew Over the Cuckoo's Nest (1975): Based on Ken Kesey's brilliant novel, this film features one of the most chilling villains of all time—the evil Nurse Ratched. It's also got a mesmerizing performance by Jack Nicholson, and a narrative celebrating diversity and straight-up weirdness, as well as the power and importance of rebellion against injustice. Sometimes, of course, those in power win; there are always casualties during rebellions, but that doesn't mean we should stop fighting for change.

3) Annie Hall (1977): We won't blame anyone who has a hard time watching Woody Allen's films at this point in time, but we will just say that this movie is pretty perfect in how it portrays the actual complications of interpersonal relationships, and its refusal to tie up anything neatly or with a happy ending. Plus, it's the only honest film depiction of Los Angeles ever.

4) Platoon (1986): Oliver Stone's Vietnam war epic is unflinching as it dives into the quagmire of war—and that war, specifically. Monumental performances by Tom Berenger, Willem Dafoe, and, yes, Charlie Sheen make this an impossible to forget tour de force.

5) The Deer Hunter (1978): This devastating look at the effects of war on those who return from its horrors is essential viewing. Robert De Niro, John Cazale, and Christopher Walken all give tour de force performances in this prime example of the Golden Age of Hollywood filmmaking.

6) Unforgiven (1992): Clint Eastwood's un-Western is a moving, provocative look at the true cost of killing, including the price paid by the killer. It smartly subverts the tropes of the genre and leaves viewers full of questions about just what it is that we glorify when we participate in the telling of this sort of narrative.

7) The Godfather: Part II (1974): The rare film where the sequel is better than the original (see below), Francis Ford Coppola's incisive look at the ultimate family (or "Family") drama is eternally relevant and always lands with an impact.

8) The Godfather (1972): The movie that launched a million bad Marlon Brando impressions is always worth seeing. (But also don't sleep on Mario Puzo's truly insane book upon which this film is based.)

9) Schindler's List (1993): There are arguments made that there are certain unfilmable events in human history, like the Holocaust or slavery, because by dramatizing them, we risk making them more easily processed, and thus dismissed. Perhaps this is mostly true, but Spielberg's sensitive, moving version of the story of Oskar Schindler is a testament to the power and importance of telling these stories well: So that they reach larger audiences, and so that we can't forget the cruelty and depravity of which we are capable.

10) 12 Years a Slave (2013): Much like Schindler's List, some questioned whether this film should have been made, but Steve McQueen proved naysayers wrong with a sensitive, unsparing portrayal of one man's experience of American slavery.

11) No Country for Old Men (2007): Even if Javier Bardem's hair wasn't instantly iconic, this Coen brothers' film is one of the best meditations on the workings of good and evil in the world around us.

12) The Departed (2006): Scorsese's take on Boston's crime world, and the issues of loyalty and faith within it, is masterful and gripping. It deserved its win, though it's truly crazy that it took this long for the master to win this award.

14) The Hurt Locker (2009): There haven't been as many great films about the Iraq War as there have about Vietnam (or World War II, for that matter), but Kathryn Bigelow's stands out for its technical genius, as well as for the director's ability to show the human side of inhuman acts.

15) Patton (1970): A wonderful portrait of the complications of an infamous military icon.

16) The French Connection (1971): Not only did this film give us one of the best car chase scenes of all time, but it gave us Popeye Doyle. True gifts.

17) The Lord of the Rings: The Return of the King (2003): This win was really for the whole LotR trilogy, and it was well-deserved. Peter Jackson truly performed an amazing feat in adapting J.R.R. Tolkien's book series, and this win was as obvious as it was earned.

18) Rocky (1976): An ultra-popular movie that actually ages well? This film is a classic for a reason, and can and should be watched again and again. Not the best movie about boxing ever made (that would be Raging Bull, which didn't win a Best Picture statue), but still very, very good.

20) Amadeus (1984): Not only did this eventually inspire a great Simpsons episode, but this film is a brilliant meditation on prodigious genius and the competitive spirit that lurks within the soul of every tortured artist.

21) Ordinary People (1980): The acting performances in this film are all exceptional, and it's the epitome of a dark family drama.

22) Spotlight (2015): This film made everyone in media feel, like, really good about themselves for a little while, which should put it toward the bottom of the list, because, like, get over yourselves already, media. But actually, it's also a really good film. So.

23) Terms of Endearment (1983): Who says a tearjerker rom-com can't be a great film? The performance by Shirley MacLaine and Debra Winger take what could just be straight sappy material and make it sing.

24) The Last Emporer (1985): An anomaly for director Bernardo Bertolucci, but a fascinating look at what it means to be an imposter and a wild glimpse into an incredibly interesting and fraught moment in history.

25) The King's Speech (2010): This film is pretty much a master class in great acting, and, hey, who doesn't love a good British period piece?

26) The English Patient (1996): Yes, it's long, and, yes, Seinfeld's Elaine found it interminably boring, but also its sumptuously beautiful, and, hey, who doesn't love a good British period piece?

27) In the Heat of the Night (1967): Sydney Poitier stars in this overtly politically charged and messaged film, which sometimes is a bit heavy-handed, but remember when we said that Sydney Poitier stars? That's all you kind of need to know; it's pretty good.

28) Titanic (1997): Okay, so, even though the dialogue is often laughable, this film actually really holds up as a technical wonder, which has given us multiple gifts in the 20 years since its release, including the ongoing "could Jack have fit on the door" debate and the gift that is Billy Zane's performance.

29) Dances with Wolves (1990): While there are definitely major issues with the whole white savior narrative that exists in this film, it's also a beautifully shot and mostly sensitive and respectful portrayal of some of the darkest recesses of American history.

30) Gandhi (1982): The cast is great and this is a perfectly fine serious biopic, but also? Tootsie really should have won.

32) Chariots of Fire (1981): Sports dramas with religious conflicts can be overwrought, but this subverts cliche—mostly.

33) The Sting (1973): What's not to love about a good amorally motivated caper featuring Paul Newman and Robert Redford? Nothing! But this film isn't the most substantive—it's all charm, which can still be fine every once in awhile.

34) Chicago (2002): We're not sure why everyone is raving about how hard it is to make a movie musical these days when this was a blockbuster just 15 years ago. It's not perfect, but so many of the performances (specifically Queen Latifah and John C. Reilly) are amazing.

35) American Beauty (1999): If you were a freshman year film student in 1999, you probably really loved this film. Which, hey, we were all young once. That's cool. But also, we grow up and out of our poor critical tendencies. And then, this film just doesn't really hold up. Like, at all.

36) Birdman (2014): We can never rank anything starring Michael Keaton too poorly, because we love the one true Batman, but this movie is, at best, meh.

37) Shakespeare in Love (1998): Long before Joseph Fiennes disastrously decided to portray Michael Jackson on film, he played another pop culture genius: William Shakespeare. Judi Dench is great. And the script is clever enough. But there's too much Ben Affleck in this; far too much.

38) Gladiator (2000): While we think the casting of Richard Harris as Marcus Aurelius was brilliant, we're not the biggest Russell Crowe fans and thus not super into this Braveheart-in-togas flick.

39) Slumdog Millionaire (2008): This film's charm is so overbearing that it is, in fact, overbearing. But it did introduce us to Dev Patel and Freida Pinto, and they're great, so there's that.

40) Forrest Gump (1994): This movie gets remembered as being some sort of hippie-based togetherness narrative when it actually promotes pretty explicitly conservative values. Gross!

41) A Beautiful Mind (2001): A false and damaging portrayal of mental illness can not be saved by the charm of Paul Bettany.

42) Out of Africa (1985): Robert Redford and Meryl Streep are great and everything, but this film is just kind of boring?

43) Rain Man (1988): A false and damaging portrayal of autism cannot be saved by the charm of Valeria Golina.

44) Argo (2012): The words "Ben Affleck Vanity Project" should send shivers down everyone's spines. And yet apparently, Hollywood couldn't get enough of him in 2012.

45) The Artist (2011): Just because something is silent and in black-and-white doesn't mean it's actually any good. Mustaches are okay though.

47) A Man for All Seasons (1966): This retelling of the story of Thomas More is just... not very good. That it won over Who's Afraid of Virginia Woolf? is a travesty.

48) Kramer vs Kramer (1979): Blatantly sexist bullshit that could have been written by a Men's Rights Activist, if those existed back then as something separate from just "men."

49) Driving Miss Daisy (1989): Morgan Freeman and Jessica Tandy are wasted in this racist narrative which tries to mask its bigotry with sappy emotion. Of course, Hollywood loved it.

50) Crash (2005): A super simplistic, reductive look at race relations which allowed Hollywood to feel good about itself while making anyone with half a brain want to vomit! No no no no no.

NEXT UP
Culture
The 2023 Oscar Nominations Full List Is Here
Culture
The Madonna Biopic Is Being Scrapped
Culture
Kaia Gerber Won’t Stop Until She’s Cast As Patti Smith In A Biopic
fashion
How ‘Spice World’'s Costume Designer Nailed The ‘Scooby-Doo on Acid’ Look
Style + Culture, delivered straight to your inbox.