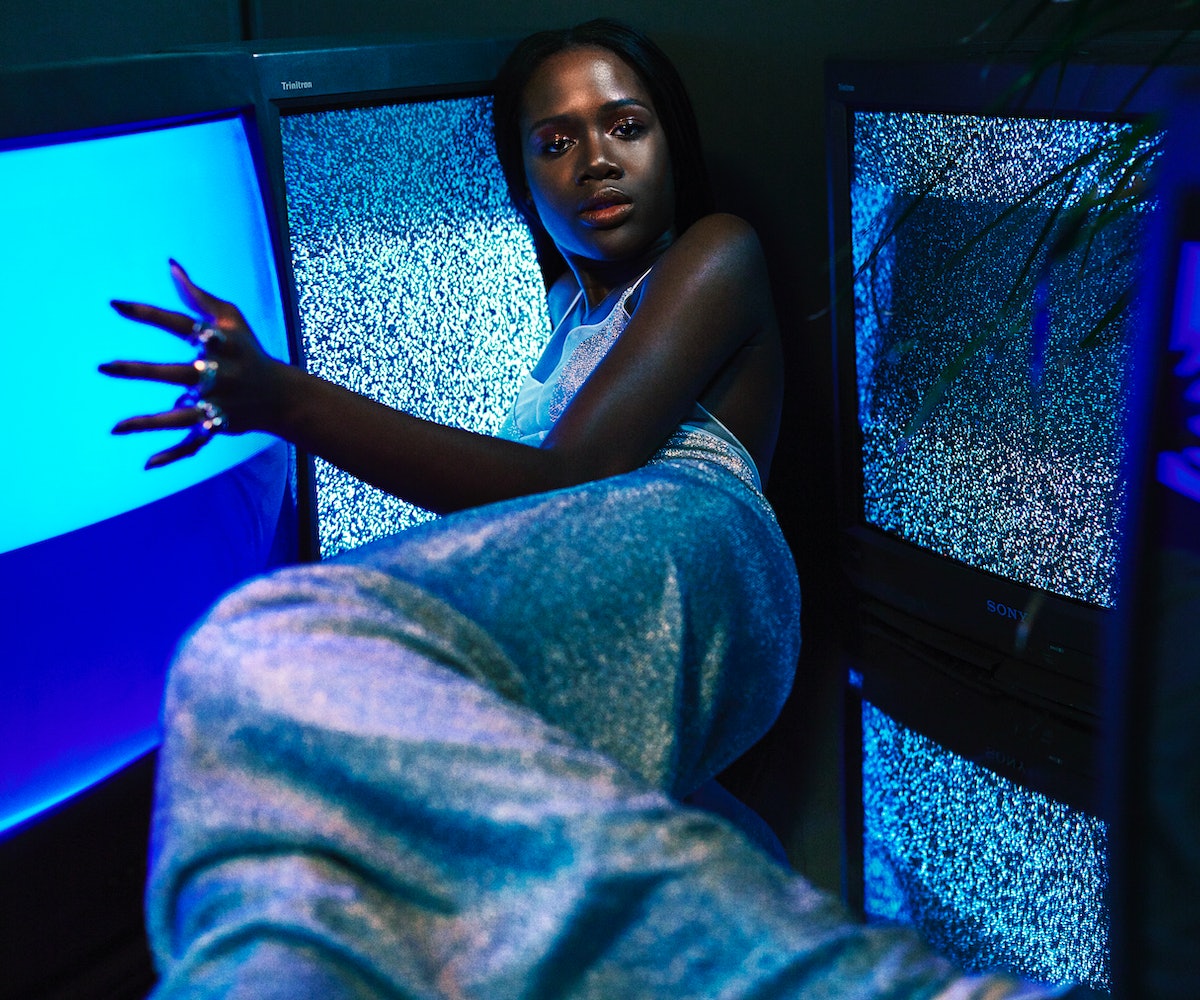 British-Nigerian singer-songwriter and producer Oyinda is an expert at making ambient tracks that burst at the seams with heavy emotions and are delivered in a sleek and minimal package. There's a heightened sense of drama hanging in the air with every pulsing note. And yes, she's already been compared to the likes of FKA twigs. Oyinda's forthcoming project will mark the third and final installment in a trilogy of EPs, which started with Before the Fall and Restless Minds. We recently spoke with Oyinda to learn more about her journey as an independent creative and to find out what to expect next. Join the conversation, below.

Most of them are pretty vague and hard to describe; they feel too fragmented. I would say my most vivid memory would be secretly singing and dancing in the bathroom when I was little. [Laughs] I still do that…

When did music enter the picture?

Music was a constant for me. I didn’t grow up in a musical household, but it was always in the picture. I think it’s a part of most childhoods in some sense because it’s in everything. Church, stores while you’re shopping, television, radio—music is always there.

What motivated you to pursue a career in music?

Music is a huge part of who I am. When I felt misunderstood, music understood me. When I couldn’t express myself, the right song would. Music helps me live honestly.

You're a self-taught singer and producer. What were some of the advantages and disadvantages of learning the ropes this way?

I taught myself to sing by mimicking the artist I listened to; same with production. At the end of the day, honest art is instinctual and emotional. No one can tell you how you feel, but they can draw it out of you; creating does that. There are advantages and disadvantages to both methods, but as long as you can stay firm in your voice, then it doesn’t matter how you get there. We’re all trying to better ourselves—at least I’d like to think that.

What artists were you drawn to early on? Who would you say influences your sound now?

Aaliyah, Missy Elliott, Whitney Houston, Celine Dion, Destiny’s Child—I think I grew up in the era where female artists dominated everything in such a commanding way; I could honestly go on and on listing them all, and that’s because they just kept giving us anthems. Now, film scoring influences my sound the most.

What was the inspiration behind your Restless Minds EP?

I pulled from a lot of different things. Paintings, books, films and shows—particularly anime. The common thread that tied everything together for this project was my anxiety. I have minor OCD, and throughout the years I’ve noticed it’s worse when I’m anxious. This EP helped me channel it.

How would you describe your music to someone who's never heard it before?

I’d say that my music revolves around cinematic storytelling. I see my lyrics as narration or dialogue, and I use sound to set the mood.

What do you want listeners to take away from your music?

Feel whatever you want, I just hope it takes you elsewhere; I hope people can get lost in listening to it.

I guess that I’ve been able to accomplish this much independently. I’ve still got a long way to go, but I’m proud of the fact that everything I do I control—not just creatively.

What is something else that you're passionate about that no one ever asks you in interviews?

[Laughs] It’s not that I’m not asked. I think the answer just changes depending on where I’m at in my life. Right now, I’m obsessed with donabe cooking and have been using Naoko Moore’s cookbook. It’s all about communal eating, which I love since I’m such a homebody and because it’s a healthier way to eat while I’m in the studio.

Given the current political climate, what keeps you motivated to get up every day and keep creating?

Creating gives me clarity; it gives me balance. My next project will definitely be influenced by that need to hold on to hope. It’s a process.

What is one piece of advice that you would give to young girls growing up in America right now?

Be the change you seek. It’s important to stay informed, to ask questions, and to know what is going on around you. Always try to lead a life with compassion and empathy because nothing can get better if we don’t try to understand what’s different from ourselves.

What's next? What are you currently working on?

There’s so much I don’t know where to begin. Finishing up solo projects for Low Noon and Canteen Killa, which I’m excited to be a part of and put out through my label this year. I’m back in the studio for my next project, as well, and wrapping up a few more visuals for Restless Minds. Just staying busy.