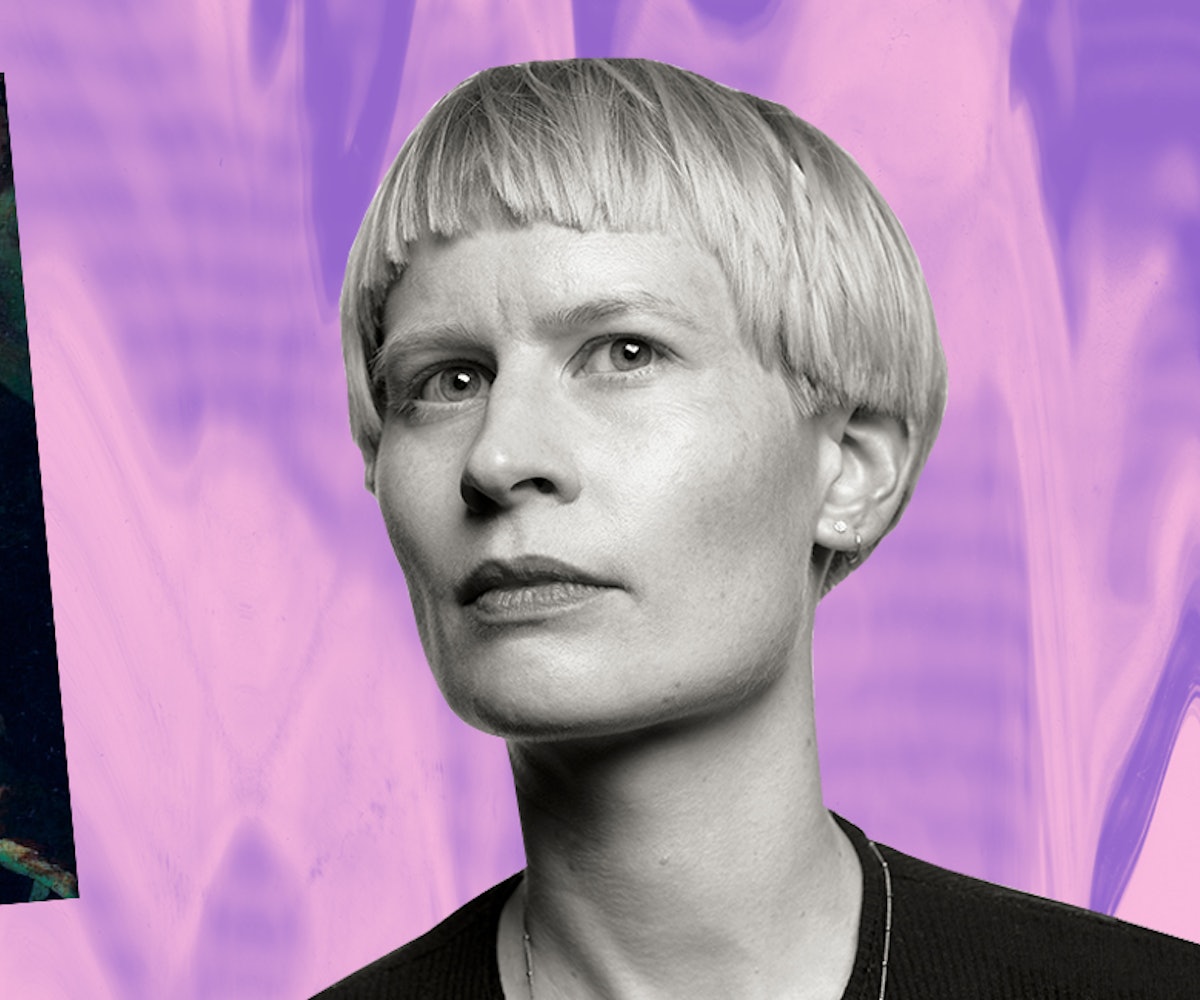 Every page of Paradise Rot, the debut novel by Norwegian musician Jenny Hval, contains something in it that burrows deep inside you. Much like Hval's musical output, the book is almost uncomfortably intimate, the kind of penetrating encounter that will make you uncontrollably shudder as your body is plunged into the sensory world that Hval has created. It's an uncanny and yet deeply moving reading experience, one that Hval uses to explore the complexities of queer desire and human enmeshment in our physical surroundings.

The book, first published in Norwegian as Perlebryggeriet(Pearl Brewery) in 2009, follows the story of Jo, a young Norwegian woman, who has moved to the small fictional town of Aybourne to pursue a degree in biology. Jo quickly discovers a world in which all boundaries have collapsed, as she moves into a former factory building with few walls, every sound pulsating through her conscious awareness.

Her roommate Carral similarly erases all clear barriers between them, creating an unfamiliar form of intimacy that challenges Jo's ability to make sense of the distinctions between her and the space around her. As mushrooms sprout from mold in their bathroom, bringing the outside world into their home, Jo and Carral find themselves uncertainly linked, with Hval writing: “Mostly I would stay still and feel the rhythm of her soft breath on my neck. Sometimes I was sure I could feel little sprouts appear under the skin where she'd breathed.”

Chatting with NYLON, Hval describes what it was like to see her work in translation, how her music and writing relate to one another, and the challenges of creating political work that isn't readily captured by platforms like Facebook.

How do you think the book compares to the original in its translated form?

I think that it was given a new life. I guess that always happens with translation: There's always the possibility of new life, and I think I even write about it in the book. It is a kind of translation, the whole idea of going overseas to study. You are translating yourself, so it's perfect for this to be translated into English.

Was it strange to return to the book after almost nine years?

Yeah, very strange. I had given up. I think that when I wrote it originally, it was a long sort of process of being quite sad about having to write in Norwegian, because if you are to publish something in Norway, then all the editors and all the people working with the book are Norwegian, so I couldn't really write in English in my country.

I actually started writing this book in English, although that was a really long time ago, like 2005. I had this opening of something in English, and then I had to begin turning it into a novel voice. The first thing I did was translate 40 pages into Norwegian, and that made writing the whole thing really hard, because I started out giving it a different language myself, although it was very frank in English. It was my English, and I am not bilingual.

I'm curious how you understand the relationship in your work between your writing and your music. Do you ever have the chance to understand them both at the same time, or does one occupy your mental space so entirely that you have to focus on it completely?

I used to think that I wanted to combine things, but I don't think there exists for me a combination as much as different ways of seeing things. It makes me really torn to do both, because even if I am writing, things can be extremely related. There are songs on some of my earlier albums that are pretty much taken from Paradise Rot, and I didn't even understand that they were that close when I wrote them, maybe because they were in English, and they were music, and I sort of focused more on the sound.

Verso [wanting] to translate and publish Paradise Rot was a reminder that I really want to write. That's what I originally wanted to do, I never really thought I'd be a musician. Them contacting me returned me to the novel, but I also got to reconfigure how I work and what I do. It's good to be able to have reminders that, ah, I did write this thing, I did really enjoy it, I wanted everyone to read it, and then I had to sort of leave it.

How much of things that you've lived through are channeled through Jo's experiences, or is the book more fictional?

I did use a lot of my experience from living overseas and traveling and being Norwegian but speaking English, I think that's the most autobiographical of all things as far as I see. I think that I chose to go into a story that I definitely never experienced, so that I could be closer to things that were important to me, which were more related to language, and how to sort of describe the world, and be more autobiographical in terms of how I want to express things, how I want characters to describe the world to me.

So beyond taking a few generic experiences with living overseas and starting school, I think that I also really wanted to be in sort of a fictional landscape. I could have written about Melbourne, where I've lived, but I started writing this book in Scotland. There were so many descriptions already that would be impossible to place in Australia. So I just sort of made up this in-between place with Aybourne.

Aybourne doesn't really exist, Jo really isn't me, she doesn't exist, but then again, it's all places I've been, and things I've seen and walls I've been sitting against and doors I've opened. With all writing, it's always about yourself in some way, but many times transformed.

What was so captivating about the book was the distillation of these experiences to the physical elements of these things. You get so close inside to the sensory and extrasensory experience of the world. How did you write these things, like milk bubbling inside of a carton?

I think that it's partly from experience, but my interest in literature and work with music have a lot to do with my incredible interest in intimacy and this kind of otherworldly experience of things being close. I think that art is a way of creating relationships and relating to the world even more vividly than we can in normal life. I think that the way that I write comes a lot from what I was reading: feminist theory, French theory, deconstruction, a lot of poststructuralism, and maybe me not quite being academic enough to understand all of these complex theories about literature and art and philosophy. Maybe not understanding them, but seeing this possibility of using language in this way, as a way of rediscovering desire in language as well, like the relationship between expression and sexuality.

I have friends who actually understand most of it, and I don't think I could, but I can in short moments. In those moments I remember it being very sensory, I remember this acuteness of senses that I get from moments of reading theory that I know I don't really understand it, but there's something in me that understands it. Even if it's the wrong interpretation, it's something that stretches. Because I studied in my second language, I didn't understand a lot of the very complex academic English. I didn't even realize how little of it I understood, also because of my very small vocabulary.

There's this vast, white canvas that should have been filled, but to me was blank pages. There was a lot of excitement about that, because there were things that I could see that other people couldn't see, because they understood things too well, and I was constantly misinterpreting everything. But there was always this feeling that I didn't know. I didn't hear those children's rhymes, I didn't grow up with English. I wanted so bad to understand everything.

How do you understand the political themes within the book, especially since it's a lot less explicitly political than some of your more recent work?

There is a lot of political content in the book, but it's about more in the way that the world and gender and biblical themes are observed. It's saying something about gazes and looking at others more than it is blatantly talking about politics. I think that was something for me that came later on—this was before I started getting more political in my lyrics. I just published another book which is much more political, although that sounds dumb because you don't need to have it in your face to engage with something politically. There is room for things to not be political in this way that it's easy to discuss on social media—"Oh, this is a political work"—and it's not always that easy. I think that there's room in life for both, and sometimes there's not much room for one or the other, at different times, but over the course of many years, my experience has been that it's a choice, and sometimes I'm really into explicit stuff, and then I need to find space for other things again.

There was a point where I thought that being really explicitly political was actually so easily absorbed into the capitalist machine, so easily represented on portals like Facebook. Why? What is wrong with the politics of this or that? I think there's just a lot of room for different ways of expressing things and expressing the world.