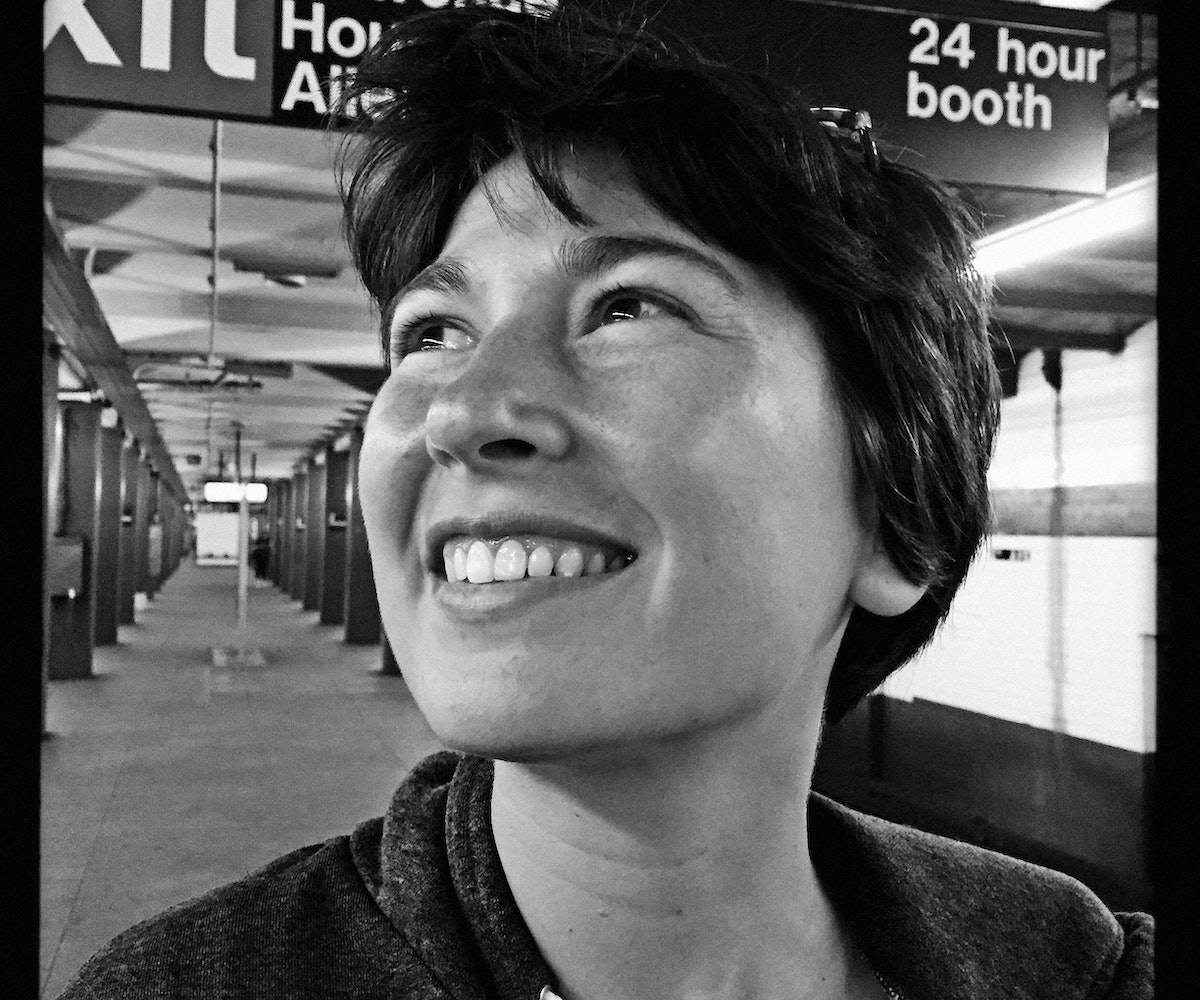 For about five minutes after we sat down in the NYLON office, in a tiny conference room, furnished only with a couple of wall shelves stacked with books, a tufted steel gray couch, and a bi-level circular marble end table that functions as a coffee table, Liana Finck and I puzzled over whether a potted succulent sitting on the table in front of us was real or fake; was it a plant or just passing for a plant? Maybe it should have been easier to tell; we ran our fingers over its edges, pretty sure that it had to be fake. But where was the hard-edged plastic seam? Why did the tips of its dark green blades look so convincingly withered? Why, if it weren't real and didn't need to be, was it planted in real soil? And then my fingernail caught on a tiny plastic bump, and any residual doubt about the plant vanished.

Still, though, its splayed shape stayed a visual focal point for Finck as we stopped talking about the conference room's decor and started talking about her new graphic memoir, Passing for Human, which—after a prologue offering the following insight into Finck's views on her art: "A draw-er doesn't draw because she loves to draw. She doesn't draw because she draws well. She draws because once she lost something. And by drawing—she will find it again"—begins again even before Finck's own beginning, with Chapter 1 telling the story of her parents' meeting and eventual courtship. And then it begins again and again, a series of new Chapter 1s; even its epilogue is another beginning, a subversive creation myth of sorts.

Finck's work, which can be seen regularly in The New Yorker, as well as on her popular Instagram page, is instantly recognizable as much for its spare, tremulous lines, as it is for its sublime strangeness, and the way it clearly conveys her ability to pinpoint with lightning strike-accuracy what it is to feel alienated, annoyed, embraced, caffeinated, overwhelmed, homesick, obsessed, in love, bored; what it is to feel like an artist, like a woman, like a human. The paradox of Finck's ability to capture so many facets of humanity within such a small amount of quavering lines, is not lost on her; but she thinks that it's working in this style that is precisely what allows her to best capture a person: "I think that's why I'm a cartoonist and not an artist. Like, a drawing of a person is deep down more of a real person than a real person is, because it's simpler. It's more vivid. A person has so many faces, and a drawing just has one face."

Of course, Finck doesn't need to be looking into someone's face to find humanity. In fact, she explained, it's easier not to sometimes: "It's connected to being very shy. I think, in some ways, I see less humanity in people than most people do. Like, I don't like to look at faces, I find strangers scary a lot of the time. And because of that, I miss out on the humanity of the strangers, and I kind of have to force myself. But it's extra-easy for me to see humanity in a rock, and when I was a little kid, I really loved rocks, and if I had a rock and I lost it, I'd be devastated, like I was losing a friend or something."

This difficulty with looking at people's faces is present in our conversation: Finck spends most of it looking at that faux-succulent. But that doesn't mean she isn't completely engaged with what's happening—she is. But her engagement with the world around her, the things and people in it, is just different.

It's a difference she probes in Passing for Human, not only through instances of her own childhood during which she felt set apart from everyone around her (in her nun-run Montessori school, she was admonished that "boys will be boys" after trying to tell a group of them to stop tearing the wings off a butterfly), but also through a chapter on her father, with whom Finck feels a strong neurological relation. But, that connection, she told me, was a particularly difficult one to explore in the book: "I felt really divided writing about my dad. The dad chapter is kind of about neurodiversity and feeling like there's something different about my brain wiring, and that comes from my dad. I feel so conflicted about that, I think my brain wiring is specific, but so are many people's. I think my dad has some similarities to me in that, I don't think he thinks so; I think he might be right... My dad doesn't like to be in stories. I think he feels like his soul is being stolen. And so I kind of regret framing that chapter in my dad. I think he feels a little confused that I think about him as a weird guy."

Feelings of disorientation are not uncommon in people who are depicted in memoirs, but perhaps they're even more likely for anyone who sees themselves in the pages of Passing for Human, not only because of its surrealistic structure and its inclusion of Biblical retellings but also because Finck changed the names of the people in it. (Liana becomes Leola, etc.; there's a note at the beginning of the book explaining that "names were changed" and "facts were tampered with.") Finck explained why she changed people's names, saying, "I had a boyfriend a year ago, who I'm not dating anymore, who really didn't like me writing about our relationship and my feelings on love and stuff. [But] that's such a big part of my life that I didn't know how I could not write about. And I realized that if I just changed his name, he would be totally fine with it—which is so bizarre to me, but I guess it works on people sometimes... That must just be why people write fiction—I'd never understood. It's about law. It's about law meeting creativity."

Imposing order on that which is fundamentally chaotic could be as easily said to be the answer to the question "what is art" as it could be the answer to "why is there religion," and Biblical ideas and iconography are pervasive throughout the book and include a retelling of Adam and Eve's story. Finck, who was raised observant and Jewish, said to me that when she first thought of incorporating the Genesis story, she thought, "It feels so right to me, I can't just let it go; I need to keep going with it." It was, she said, "like a lightning bolt."

Finck talks about lightning bolts a lot in her artistic process, and the act of discovering what it is she really wants to do—this doesn't make the beauty of her work feel accidental in any way, but rather fated. Fate, though, is a tricky concept, one that attracts a certain type of magical thinking to which Finck both does and doesn't ascribe. We talked about how fate comes into play, sometimes in retrospect, in love. She said, "I think if you care about fate, you'll end up in a relationship that feels like fate... At the moment, the person I'm dating is a fate person. I think I care about fate, but it's really burned me in the past, so I don't know what'll happen. I'm a mixture."

I love that idea, though, that if you care about fate, you can find something that feels fated.

"Yeah, I think it can really keep a relationship alive, and that's such a hard thing to do."

"Yeah," Finck paused for a moment, looked hard at the plant. "But, on the other hand, I don't know if you should keep a relationship alive. I don't know."

Finck's willingness and ability to get beyond the superficial appeal of something—like the inherent value in keeping a relationship alive—in order to present its murky bottom, where real complexities lie, and where there are no easy truths, is what is so brilliant about her work, what gives it that lightning bolt sensibility. She explores uncomfortable places, offers different perspectives, thrashes about in her nostalgia, and for that reason, it feels like those trembly lines of hers are like wires in which it is possible to get tangled up in, yes, but also to use as guidelines, a means to trace your way out of the maze that is her mind, that is yours, that is every human's. Passing for Human is, in some ways, an exploration of how Finck has always felt separate from a world of which she is definitely a part, and yet, despite how distinct she feels (and is), she still makes connections with other people, who see themselves in her sensibility.

Finck knows this, though. She knows that those links are being made, she said to me, "Maybe when I'm feeling low, I'm just prone to think I'm different, and maybe I'm not even that different at all."

Passing for Human is available for purchase here.