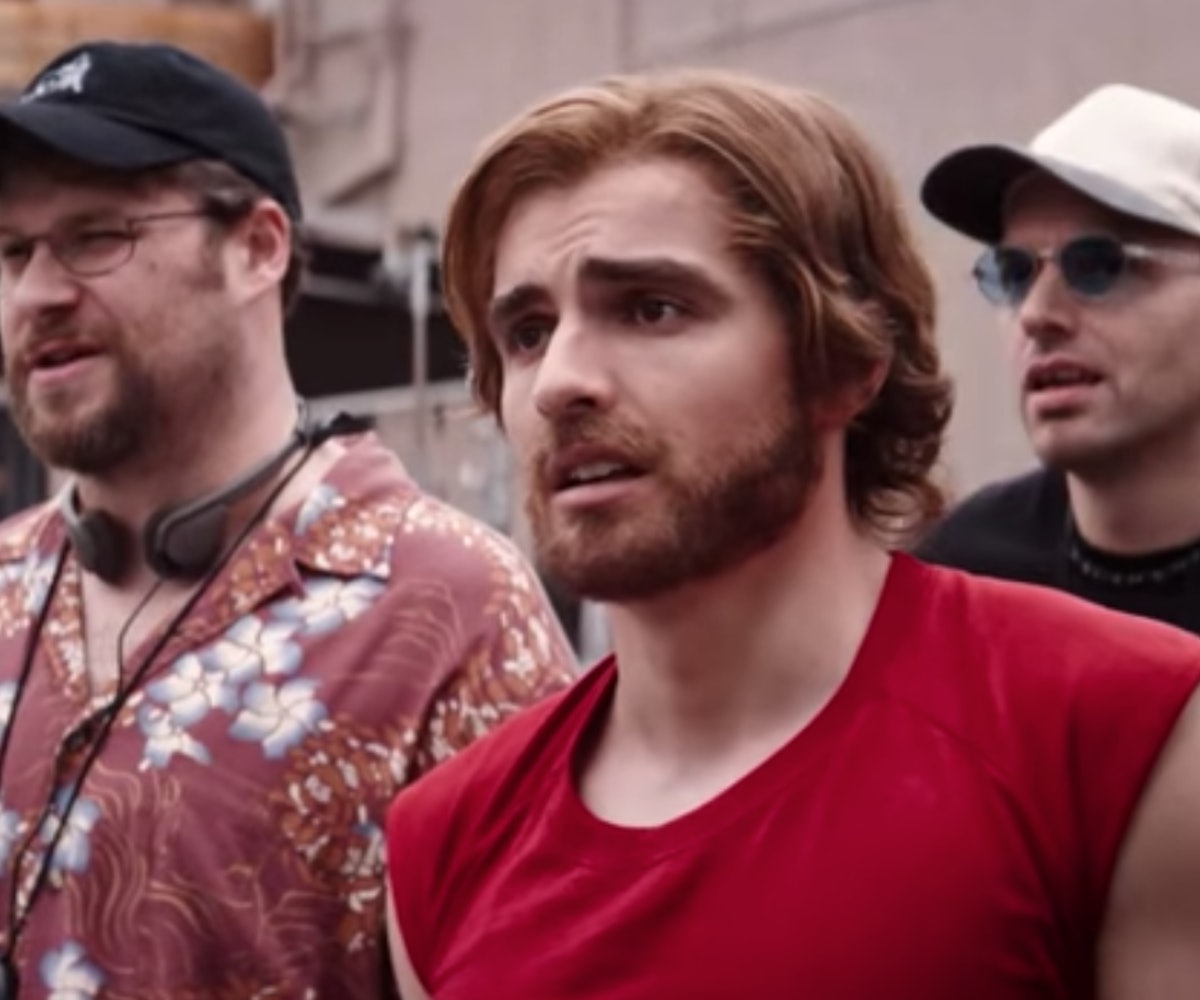 Before I even get the chance to talk with Paul Scheer about his work in The Disaster Artist, a film centered around the making of the "worst movie ever made" The Room, I've had the actor's opinions about the cult film quoted to me by both his co-star Ari Graynor, who said that Scheer likened watching The Room to an ayahuasca experience and recommended that all first-timers do it with a guide, and the screenwriters of The Disaster Artist Scott Neustadter and Michael Weber, who said that they like to steal Scheer's line about how if you've already seen The Room, then The Disaster Artist is like a sequel, but if you haven't seen The Room, then The Disaster Artist is like seeing a prequel. All of which is to say, I suspected Scheer would be highly quotable even before we'd met. I was not disappointed!

Below, read about Scheer's experience with The Room in his own words, how that movie both is and isn't like Apocalypse Now, and how The Disaster Artist gets to the heart of what it means to succeed in Hollywood.

What was your experience getting on board the project?

I’ve had this soft spot for The Room for a long time, and, like most people, I was kind of brought into the cult of The Room by a friend—and, I think, that’s the best way to see The Room. Someone’s got to tell you about it, and you’ll have questions, but they can’t answer them because nothing will ever describe exactly what it’s like, and you have to go and see it, either with a group of people at your house or in a theater, and it’s mind-blowing.

I remember the first time I saw it, I immediately watched it the next night with the same group of people because we were like, “What did we just see?” And so on that level, viscerally, it’s been one of those movies that's so bad, it’s good. I have this podcast, where we talk about bad movies [How Did This Get Made?], and we brought on Greg [Sestero, who co-starred in The Room and wrote the book upon which The Disaster Artist is based], and Greg, at that point, hadn’t written the book, but he was about to. And so Greg and I sat down and he started to tell this story about Tommy [Wiseau, who wrote, directed, and starred in The Room], and all of a sudden, it was like peeling back layers of an onion, like, “Oh this is a much more complicated story here, this is not simple, it’s not just a bad movie, it’s more.”

And then I got called into the table read for The Disaster Artist, and James [Franco, who directed and starred as Wiseau in The Disaster Artist] was already in full Tommy voice at that point, and the script was amazing because it took what was so great about the book, it kind of compacted it, and made it this. I was surprised because, in a way, it was like an artsy movie, you know? It is what it became, which is a heartfelt movie, and I think it would have been so easy to make a movie like, “Oh, this idiot,” or whatever, but it has a lot more emotional resonance because I think Tommy and Greg are fascinating. The relationship between them, and still to this day, they push each other to do something, and it’s like La La Land, but it’s reversed. Yes, they had these dreams and they wanted to achieve these things, but at the end, they didn’t get a jazz club or become big movie stars, they made this movie that is another kind of amazing thing, but not in the way they intended. So it’s really interestingly layered in that sense.

Something like this could’ve been, if not mean, at least approached with a level of cynicism. It would’ve been the ultimate gross punch down, but that is so not what happened.

It’s a lot of really good instincts being put to use. I think that Neustadter and Weber are just amazingly talented writers who can cross genres so wonderfully, and I think what they successfully did was ground [the story] in a relationship about these guys. But I think a lot of credit really goes to James. Everyone’s talking about his performance, which is amazing and really deserves every bit of accolade it can get, but I think where he’s a little more sly is in the directing of it, because it is handled in this way, where... Tommy is a caricature—if you don’t know that he exists, it’s like James is doing Borat.

And so, when you leave that movie feeling for Tommy and seeing from Tommy’s point of view, to pull that off... that, I think, is why the movie works. And I would go one step further and say I think that Dave Franco—another underrated guy in this movie, he’s amazing in this movie—is a reason why we go along this journey, too. It’s a movie that stands on its own two feet. It happens to be based on this terrible movie, but you don’t need to see The Room to enjoy it. You don’t need to know anything about this to enjoy it—it’s really a movie about creation and how once you put something out there, it’s going to be perceived not always the way you intend it to be perceived, and it becomes the public’s. And the public took this and was like, “We’re making it this.”

Still, all the instincts of the creator are there. There’s no difference between Steven Spielberg and Tommy Wiseau in the sense that they both had visions, they wanted to articulate those visions. And the difference is in the product, but the instincts, the root instincts, are exactly the same, and I think that’s what’s so fun about it—it makes it kind of relatable.

I was talking a little bit about this with Ari [Graynor], about the commitment to art and how you don’t, as an actor, always know what the final product will be. I mean, there’s The Room, and then there are movies that you do really think are going to be good and then they wind up not being good for a variety of reasons.

Look at Apocalypse Now, right? Apocalypse Now had an insane production, [but] in the pantheon of great films, it’s up there. Or even Titanic! You just don’t know.

In order to really participate in a project as an actor, as a writer, as an artist, etc., you have to be committed, and that was something that I thought was very interesting watching The Disaster Artist, and thinking how there were probably people advising everyone working on The Room to maybe do something else. And to a certain extent that was Alison Brie’s character, Amber, telling Greg, “Just leave it, go do your guest spot on Malcolm in the Middle.” But Greg and the other actors were instead like, "Well, no. We’re in this.” And to a certain extent, there’s something really beautiful about that.

I think independent film, more than anything else, is a team sport because you’re not in it for the money, so you’re in it to hopefully do something that’s good or get tape for yourself. So I think there’s an element to it where you can’t see the forest through the trees, you have to go like, “Well, maybe I’m not seeing the full picture... maybe I don’t understand how this will be great.”

And I agree, each one of these characters are based on real people, they committed fully, and it’s kind of a wonderful sentiment because that’s what I think making movies is, that’s what being creative is—trusting people, working with people, and hopefully, knowing that everyone’s got your back. Even in the worst scenario like this.

I really liked that message behind it and that spirit of working together for something, and then ultimately—like with any piece of art—it’s out of your hands, and there’s probably no way that Tommy or anyone would’ve thought that it would have the afterlife that it had.

It’s crazy because, in a world of bad movies and mediocre movies that people don’t remember, it is interesting that this movie was plucked from that and then launched in this way. I mean, Rocky Horror Picture Show is the only thing [similar, due to its cult following], but Rocky Horror Picture Show isn’t even a bad movie—it’s this campy experience, so it’s different. And it really is one in a million when something like this happens. And it’s the fans, and there’s something clearly there, and you can’t judge, like, “I’m a fan of Star Wars, but that’s being a real fan, but being a fan of The Room isn’t being a real fan,” and I argue it’s the same thing. You’re supporting something that you take enjoyment in, and there’s something cool about that. These guys have been able to travel the world and live off The Room.

They definitely won. But, like, so did we all, because The Disaster Artist is just such a great film.

It’s such a fun movie. I know I’m in it, but I think it’s really good. I think it’s a really good movie. And again, going back to that La La Land thing, it’s more what is realistic in Hollywood. People have dreams, and it doesn’t work out, and it’s sloppy, and it’s messy, and it shows a seedier side. It’s like a bizarro success—which not to make it any less than what it is, we’ve just never seen that story. This is a thing that’s happened, and I believe The Room is going to reach its peak after the release of this because people are going to be like, “Wait, what? This exists?”