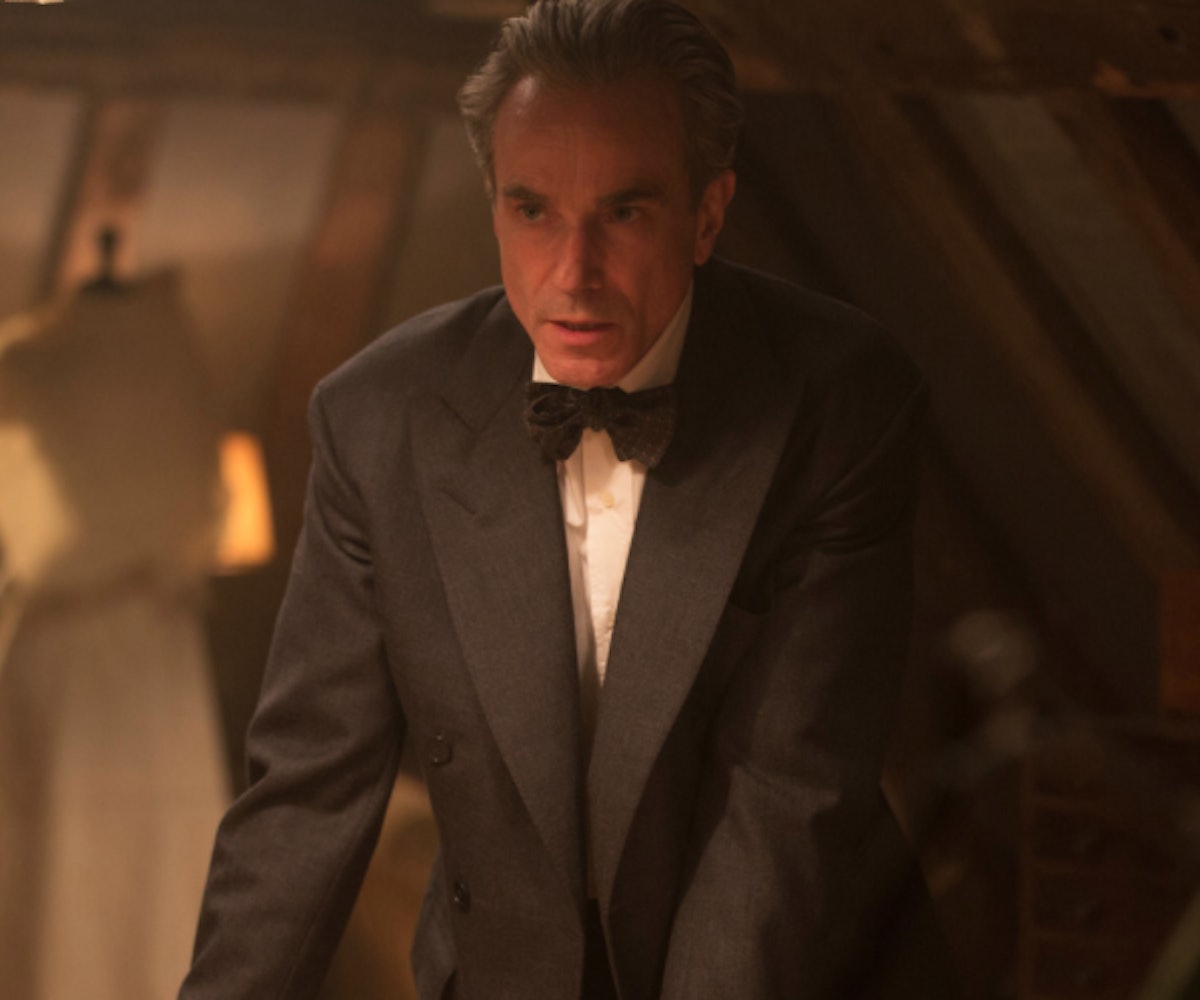 The title of Paul Thomas Anderson's vibrantly strange film Phantom Thread refers to the secret words that fashion designer Reynolds Woodcock (Daniel Day-Lewis) likes to sew into his haute couture garments for wealthy women in 1950s Britain. One of Woodcock's most important clients is the heiress Barbara Rose (Harriet Sansom Harris). Anderson gives Harris only four scenes in Phantom Thread, and they are not long in terms of length. But it seems to me that Barbara Rose is like a message stitched into the fabric of the narrative, and her appearance feels crucial to understanding the rather obscure meanings of the movie.

Though her first name is Barbara, it did not occur to me that Harris was playing a role based on the Woolworth heiress Barbara Hutton until her second scene, where Anderson stages Barbara Rose's humiliating press conference announcing her marriage to a noted playboy, who is clearly meant to be the infamous Porfirio Rubirosa. When I got home from seeing Phantom Thread, I Googled Hutton and Rubirosa and found photos from their own press conference, which looks exactly like the one in the film, down to the couch they are sitting on and their positions on it.

We first see Harris’ Barbara Rose tottering up the steps of Woodcock’s atelier on the arm of a male handler. Harris walks in such a way that she gets across the idea that this woman is so rich and so fragile that she has lost the ability to move from one place to another without help. (The consumption of large quantities of alcohol is, also, maybe part of her mobility problem here.) Her face is quivering with hope and expectation as she ascends those stairs, but these are quickly dashed when Woodcock fits her for a dress. Barbara Rose looks at herself in an offscreen mirror as she is fitted, and her eyes bulge with grief as she exclaims, “I’m still so ugly!” She begins to pull at the fabric at the top of the green dress in an attempt to hide her face, and Woodcock, a control freak, severely reprimands her for this.

The way that Harris says, “I’m still so ugly” is extremely upsetting, and she seems to have accessed some deep-seated emotion within herself to represent Barbara Rose’s despair. Phantom Thread is a movie filled with performances that feel like the best Method acting from the mid-20th century, when actors like Montgomery Clift and Julie Harris seemed to know every minute of each day in the past lives of their characters. Harris does this thing where she drags up very raw grief from within herself and then controls it physically and reins it in, which is what Barbara Rose has to do socially in this situation. It reminded me of the scene in Anderson’s Boogie Nights (1997) when Philip Seymour Hoffman’s character, Scotty J., confessed his love to Mark Wahlberg’s Dirk Diggler and then sat in a car afterward repeating, “I’m a fucking idiot” in an inconsolable way.

Phantom Thread is partly about power dynamics between people, and none shift more than in this fitting scene with Barbara Rose, who tells Woodcock that she expects him at her wedding. He does not want to go, but she stares at him and tells him that she “really must insist.” The effect of this change is emotionally dazzling because Harris has shown us such a private moment of Barbara Rose’s unhappiness with herself, and now she shows her getting her own back by asserting her power over this distinguished man and treating him like a servant. What’s indelible here is that Harris doesn’t make the change in attitude too extreme. When Barbara Rose says that she “must insist” that Woodcock go to her wedding, her face and her voice still sound a little soft and shaky. But she has issued a command, and it must be followed.

Woodcock does go to the very sad press conference, and his frustrated girlfriend Alma (Vicky Krieps) stands next to him and looks very dismayed. It seems as if Alma is dismayed because she feels compassion for Barbara Rose, and maybe she does. But Alma decides to use the Barbara Rose situation as a kind of chess move with her very difficult lover.

When Barbara Rose gets so drunk at her wedding reception that her head falls into her dinner plate, Alma gets upset, and Woodcock tells her not to cry, but Alma says instead that she is angry. Not angry about what the world has made of poor Barbara Rose, but angry that Barbara Rose is not treating one of his garments with the proper respect. This is the first indication in Phantom Thread that Alma has a twisted psychology that makes Woodcock’s own Oedipal issues seem mild in comparison.

In an earlier scene, Woodcock had unguardedly spoken to Alma of his “ugly” governess, who did not want to sew his beloved mother’s wedding dress because she superstitiously believed it would hurt her own chances of marriage. Alma stores this information away, and now she makes use of it to impress Woodcock and begin her campaign to vanquish the looming influence of his dead mother.

Woodcock and Alma go back to Barbara Rose’s hotel room and actually strip his dress off of her drunken body, and then when they go outside, Woodcock kisses Alma intensely, as if to say, “You’re even crazier than I am, what a relief!” They are a romantic match, these two, and that’s what Phantom Thread dramatizes in its screwball melodrama way. But Harris dramatizes—with very limited screen time—what can happen to a person who is unlucky in love.

Hutton was married to Rubirosa for less than two months, and in exchange, he received a coffee plantation in the Dominican Republic, jewelry, polo ponies, and roughly 2.5 million dollars from her. So it was an expensive month-and-a-half for Hutton, and Barbara Rose will probably have to shell out just as much money for her own playboy (hopefully he is just as skillful a bedroom technician as Rubirosa was reputed to be). It seems clear that Anderson’s big heart goes out to Barbara Rose, even if she is just a pawn in the game of the main characters.

Lesley Manville is superlative in Phantom Thread as Woodcock’s forbiddingly controlled sister Cyril, and more than worthy of attention for supporting actress awards. (When Cyril warns Woodcock not to pick a fight with her because she will have him “on the floor” if she chooses to strike out at him, you believe her.) But Harris is just as worthy in her own much shorter screen time, and her memorable performance as Barbara Rose is an example of that hopeful adage: “There are no small parts only small actors.”