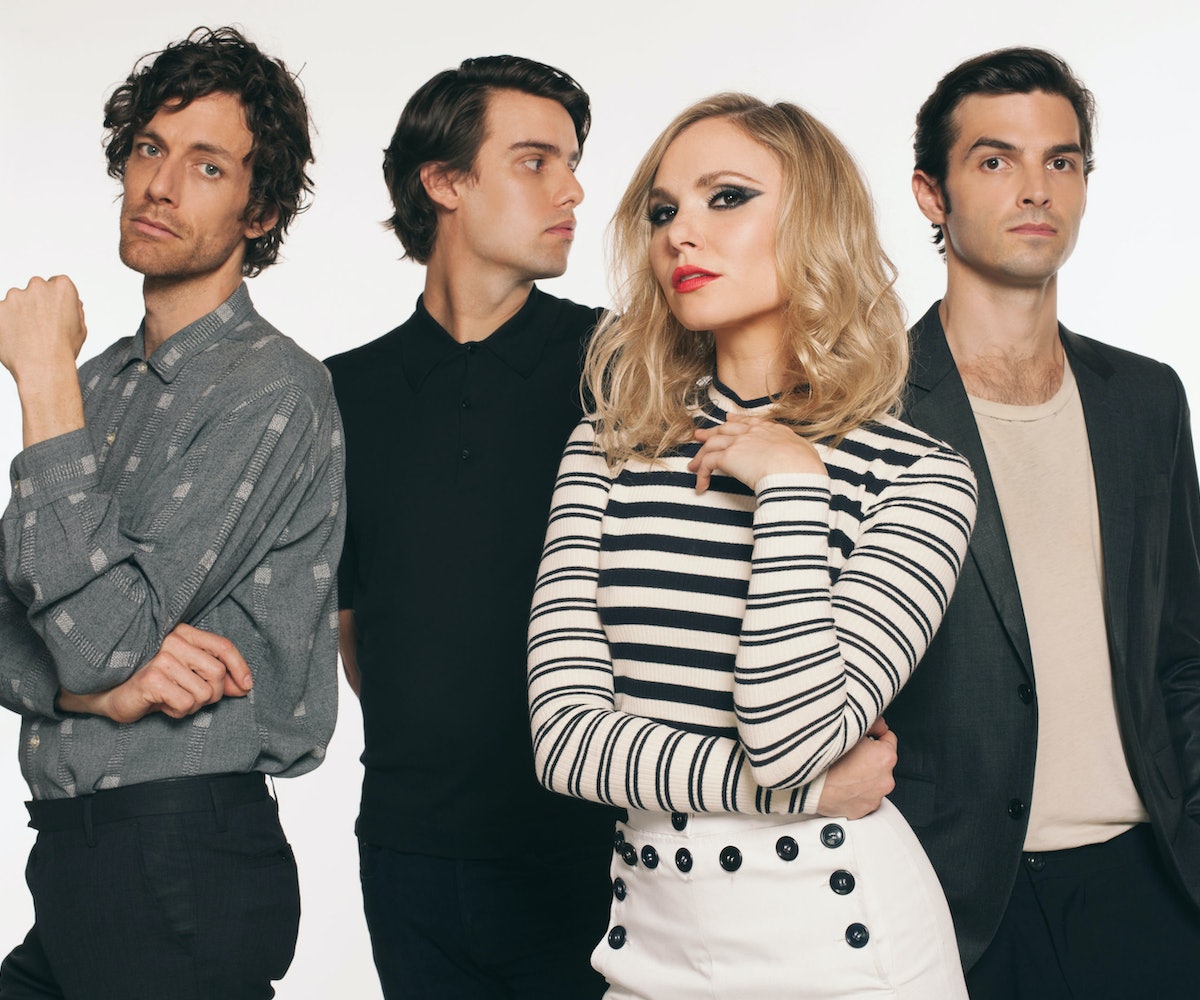 L.A.-based quartet Phases, formerly known as JJAMZ), makes music so sweet, it'll send you into a sugar coma. Consiting of Z Berg, Alex Greenwald, Jason Boesel, and Michael Runion, the alt-pop band has been together officially since 2009, but they've known each other for over a decade. Wondering why some of those names sound familiar? Berg used to be in The Like, Boesel came from Rilo Kiley, and Greenwald was in The O.C. theme-song band, Phantom Planet.

We like them so much we had them sing in the shower for us, and the we chatted with lead singer Z Berg about how a bunch of indie artists came together to make such upbeat magic. Get to know the band in this exclusive interview below, and cop Phases' debut album For Life here.

What really stuck out to me about your new album is how different it is from what I expected based on the other bands that everyone has been in. How did you guys arrive at this kind of classic-pop, disco-dancey vibe?

You know, that’s a very good question. I think the thing that I really loved so much about this band is that all of our different bands sounded very, very different. All of our taste is very different, and so I feel like we’re drawing on a tremendous amount of influences. I feel like each of us probably has a different favorite decade. So there’s a crazy amount of influences and the real through-line is that when we started making this music, we were working on the first incarnation of this band. There was a part that thought we might not make music anymore because we just didn’t really know what we wanted to do, and then when we started working on this new stuff, it was the first time that all of us felt like it incorporates all of our influences and all of our pasts. It’s something that can only be made by the four of us, and it’s a sum of our parts and not something that anyone could do alone. Each of us alone is kind of a useless, broken person, but together we’re like one very exciting human being.

Yeah, that definitely comes across. I feel like there are a lot of throwback references, like I could hear old Madonna and even Michael Jackson in some of the songs. Were those some of your inspirations?

Yeah, definitely. I think there’s definitely a lot of that in there, and a lot of chic and old boogey and disco... Everything influences me. I grew up only listening to ‘60s music. We definitely wanted to make sure that it was certainly not a retro or a throwback record. It has a lot of that stuff in it, but it’s all modern technology recording this record. It’s all new sounds and it’s being physically recorded now. Incorporating classic influences with a real sense of modernity is very important to us.

You can tell that there is a sophisticated production element combined with the retro sounds which is really, really cool. I was also wondering if you could talk about how you chose to go with the theme of optimism for this record. A lot of music that is coming out now is pretty dark or cynical, but this is not that at all.

When you listen to the whole record, there is definitely some darkness that’s in it, but I feel like the overwhelming sense of stimulation in this record is totally one of positivity. The huge thing that it comes from is the fact that we had a really wonderful time writing and making this record. These truly are my four best friends. It also came out of a bit of personal turmoil of us. None of us were in a great place. I wanted to move out of L.A., and I didn’t know if we were going to play music together. Then this music really brought us back together and strengthened our friendship and our excitement as a band. I’ve never had more fun making or writing a record. We write everything together, so it’s kind of like having a party. It’s like hanging out with your best friends, watching movies, and dicking around, and listening to other bands, and then we would write a song. We get something creative out of it. We would also sit around and talk about the lyrics and what’s going on with us. I’ve never had that experience of being that fun and bro-ed out to make music with people.

I’m an incredibly positive person, and I think it’s partly to counteract the horrific darkness that all of us writers have inside of us. I’m a real Pollyannic, I’m annoying. Driving with me is like actually annoying. I’m like, “Oh my god, do you see this car? Do you see this guy? Have you been there?” So I think that my music has always been focused on the darkness and writing most of my music in. I think its very exciting to have, to represent the way I really do feel about life which is like, I am blissfully overcome with how much I can’t believe how awesome it is to be alive. I think it’s important to be reminded of that.

You performed “Cooler” for our Singing in the Shower series. What was that experience like?

Oh my god. First of all, that is the most fun session I feel like we have ever done. The series is a real perfect fit for us because when we started the band, the first time we got together we were all out at karaoke and we were a little bit intoxicated, let’s say, because we were all hanging out. The bar was too crowded, so we couldn’t really sing and we kind of just decided, “Oh my god we should make a band, let’s go home and start one.” And we went back to our old guitar player, and we wrote a song. I went in the shower—which was our vocal booth at that time—and sang the whole song, and that was our first beginning of this band. I sang all of our vocals in the shower. When we got back in we were like, “Oh wait this feels very familiar. This is just the perfect session." I’ve been doing that for years—any time I write or record demos, I’m always doing it in the shower. I love reverbs in the shower, and showers are always the best actual reverb.

We were really excited about that and how perfect that kind of fit for us. That song is a funny one, because it started in such a funny way—it was literally our drummer driving around L.A. last summer in his own old Mercedes, which does not have air conditioning. So he was driving around going, “Damn, I really wish it was cooler,” to that melody and then he was like, “Oh wait that would be fucking cool.” And just started writing that song, and then we kind of turned it into an actual song with a real meaning. But I loved that it started that way. I also loved that sentiment, just that sense of that initial excitement you have upon meeting somebody and then realizing, “Ugh, damn, I really thought you were cooler.” He’s just like, “You know that’s the feeling I’ve had after every two months in a relationship.”