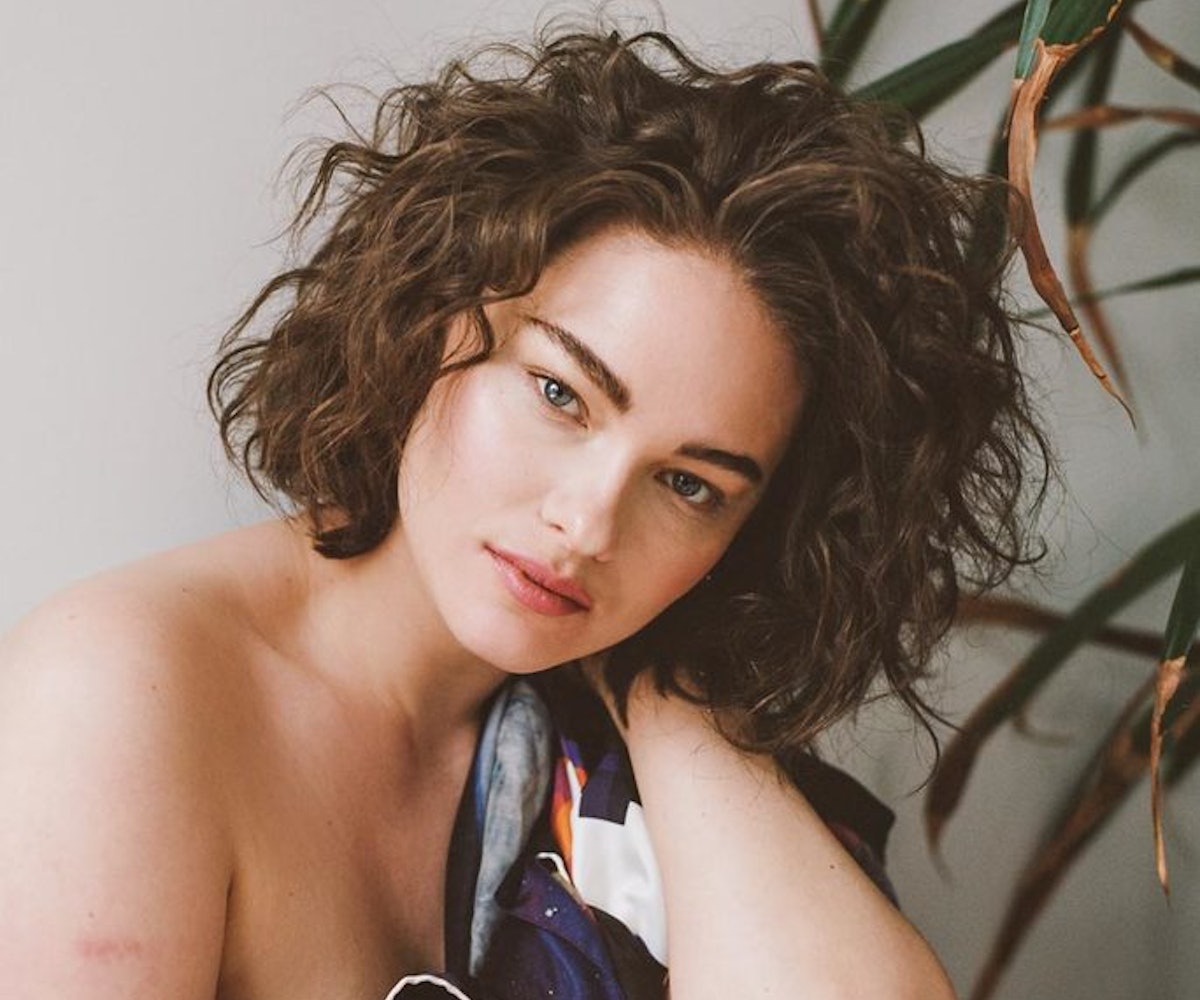 Jennie Runk had no idea that wearing a bikini would turn her into an overnight sensation. And after her ad for H&M swimwear went viral in 2013, the plus-sized model, actress, and advocate began to use her rising fame to speak out about body diversity and inclusivity in the fashion industry. Right off the heels of her viral success, Runk wrote an op-ed for BBC about her life as a plus-sized model since being discovered at her hometown's Pet Smart, and how the overwhelming response to the ad compelled her "to show girls who are going through the same thing that it's acceptable to be different."

"There's no need to glamorize one body type and slam another," she wrote in the op-ed. "We need to stop this absurd hatred towards bodies for being different sizes. It doesn't help anyone, and it's getting old."

Four years since, Runk hasn't shied away from using her voice to speak out against mainstream beauty standards, LGBTQ+ rights, and representation in media. She recently appeared in the critically acclaimed documentary Straight/Curve, alongside the likes of Orange Is The New Black's Danielle Brooks, Chromat's Becca McCharen-Tran, model Tess Holliday, and countless others. The film underscored the fashion industry's obsession with unhealthy and unrealistic beauty standards, as well as its overall responsibility for the world's body-image crisis.

We caught up with Runk as she wrapped her role in The Sex Myth: A Devised Play, based off the best-selling book by Rachel Hills, to find out who inspires her, about her work as an activist, and why she identifies as a Hufflepuff.

Can you tell us about your experience with the film Straight/Curve?

While filming Straight/Curve, I learned even more about how important it is to push for size inclusivity and diversity in the fashion industry. As a plus-size model, I’ve always been an advocate for body positivity, but this project reinforced the immediate need for change. It motivated me to push harder for a world of size inclusivity.

In what ways do you think the modeling and beauty industry has worked toward inclusivity?

We’ve come very far, but there are still strides to be made. Plus-size models are cast in more mainstream editorials and campaigns, which is amazing, but we’re still pushing for more diversity in the fashion industry. There’s a disparity between the beauty standards represented in media and the diverse and unique beauty in real people. Representation is so important in changing the conversation; we need to see a variety of sizes, people of different races, non-binary genders, and different abilities in the spotlight as well. We all need to be a part of the solution and work together to ensure representation for all.

Whose album are you currently loving?

Instead of sticking to albums, I create and listen to playlists on Spotify. One of my favorite playlists right now features a lot of indie acoustic covers, a capella covers, and gender-swapped covers of popular songs.

My female friends and family members are my biggest inspirations.

Do you have any pre-casting rituals you do for good luck?

I turn up my music and sing along as loud as I like while I do my hair and makeup. I make sure to start getting ready early so that I can totally relax and take my time—maybe take a break from curling my hair to sing into my mascara wand. I also spend some time cuddling or playing with my cats. Plus, I always make sure I have time to pick up a latte!

Can you tell us a little more about the play you’re starring in and the message it sends?

The Sex Myth is meant to debunk sexual taboos and spark conversation about identity and normalcy. My favorite thing about the play was there wasn’t just one “star”—there's eight! Each cast member wrote a scene based on his/her life experience, and we all helped to tell each other's stories on stage. It was the most diverse cast I've ever seen in terms of race, gender, and sexual orientation, so each of our lived experiences was unique. Although different in background, we found that our stories taught us similar lessons about identity, self-acceptance, and what it means to be "normal." These themes shaped the play’s message, and I hope everyone who saw it walked away feeling more exposed to diverse stories and secure in their own identities.

Do you have any hobbies?

I have tons! I'm an avid gamer, currently playing “Zelda Breath of the Wild” on the Nintendo Switch and loving it. I also love re-reading or re-watching my favorites—I’ve read Harry Potter and The Hunger Games multiple times and am always up for a Doctor Who or Star Wars marathon. I'm also really into crafting—I can zone out for hours with my craft kit, making jewelry, embroidering, or bedazzling my clothes, or even just coloring.

What are your thoughts on social media activism? Do you think social media helps or hinders ideas of inclusivity when it comes to the beauty/modeling industry?

I think social media is a fantastic tool for spreading awareness and getting a message out. Having control of your accounts is awesome because anyone can create content and join a conversation, making it easy to find and connect with people who have similar interests. As a model, I don't always have control over my image. I don't always get to choose the shots that go to print or how much of an image is retouched. But on Instagram, I can own my look—I’ll post a picture showing my belly rolls, my stretch marks, or the dimples on my thighs. Those things are a beautiful, real part of being human, but are often left out of the mainstream media.

I also use social media to address issues I care deeply about, such as LGBTQ+ rights, representation in media, and a general celebration of our differences. We’re all unique, and that is what makes us beautiful!

You’re a huge Harry Potter fan. How have the books and films impacted your life? Your Instagram bio says you identify as Hufflepuff—why is that?

Those books and films have had a massive impact on my life and have played a huge role in shaping the kind of person I strive to be. I consider myself a Hufflepuff because I’m fiercely loyal, kind, and compassionate, and I value those traits above anything else. I relate to Luna Lovegood’s character, even though she is a Ravenclaw, because of the way she loves her friends and isn’t afraid to be a little weird sometimes. Weird is awesome!

What can you tell me about any upcoming projects you’re working on? Is there anyone you’d absolutely love to work with at the moment?

Performing on stage during The Sex Myth gave me the acting bug, so I will definitely be acting and performing again! Actually, a few of the cast members from show, as well as my partner Andria, and I are already collaborating on something new! I was heavily involved in improvisational theater in high school and would love to pick that back up. As far as anyone I’d love to work with, well, being on Doctor Who is my dream. If anyone at BBC is reading this, um, pretty please!?