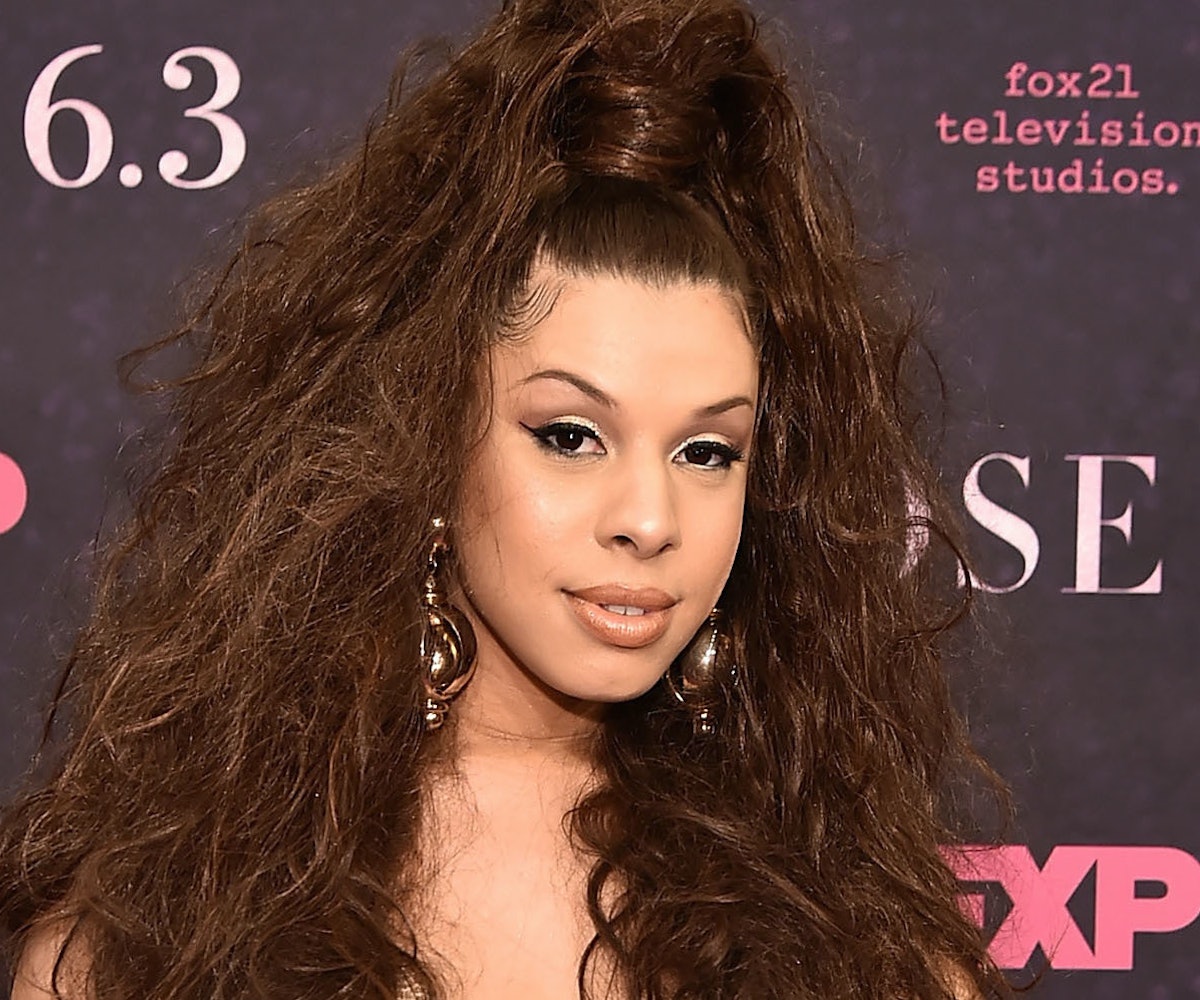 As FX’s press release notes, Ryan Murphy’s Pose made television history when it premiered yesterday for being the show with the “largest cast of transgender actors in series regular roles, as well as the largest recurring cast of LGBTQ actors ever for a scripted series”—and that is no small feat. Even in a world where the stories of marginalized people are becoming more and more prevalent, trans narratives continue to be shortchanged in the contemporary cultural conversation, which tends to prioritize the perspectives of cis-normative men and women over the voices of trans people and often cast the roles of trans characters with cis actors. But not Pose. And this, according to Pose star Hailie Sahar, who plays Lulu Abundance, is what makes her show so special. She emphasizes the importance of people like Murphy—who empower trans people to tell their own narratives—helping bring more authentic perspectives to stories about ballroom culture and voguing to the forefront.

Read our Q&A to find out more about her ball culture background and how she prepared to tackle such a deeply personal narrative, below.

Why do you think we're just now getting trans narratives in mainstream pop culture?

I have to pinch myself because it's all surreal. I just work so hard and, coming from trans experience myself, you kind of dream for a day like this. The world is changing. So, you could imagine, for me, it's like walking in heaven right now.

I think [we’re seeing more of these narratives now though because] the world is changing. With everything that is happening—with the Trump era and younger people [becoming more active]—I think that we now want truth. It’s also easier to accept things. People are [more open to] what they don't understand. I think the world as a whole is just changing and the way that we see life is changing.

What drew you to Lulu?

I love giving this example of Lulu. First of all, Lulu is a fashionista. She loves fashion. I mean she is the girl in the '80s who keeps her face in Vogue and is always looking at the new trending [looks]. Who she is, though? I refer to her as a lioness. The reason being is, before a lioness hunts her prey, she stalks it first. Lulu is one of those characters who you have to always be looking at. You have to always watch her because she is stalking something. What she's stalking? You don't know. She is like a lioness. She will attack one day.

What did you do personally want to bring to Lulu?

I wanted to get out of my own way with Lulu... I wanted to discover her on my own. So, I made a playlist of music from the '80s that I thought she would want to listen to. I based it all off of her being into fashion and her being a sexy, curvy girl, because I wanted to bring something real to her. I didn't want it to be forced. I didn't want it to be a character that I had seen or portrayed before. [She wasn’t a character that I was putting together from] bits and pieces I know, which I know we do as actors. I just wanted to be authentic, so I literally zoned out a few nights, and I was just listening to music. I would close my eyes, and whatever emotion came to me, I started delivering my lines in my rehearsal that way. I did it for a few ways until I worked through it, and I found my character. As we've been filming, she's been coming alive even more and more.

Were there any particular scenes with your character that really hit home for you?

It's not so much a scene for me, it's more of being on set and being around these '80s costumes and then delivering my dialogue with my cast members. The narrative, the story lines, are so real—these things that my brothers and sisters of the trans experiences had to endure. And they are moments I think about every time I'm on set. We are reenacting things that actually took place. And while things have gotten a little bit better, they're not all the way there. But in the '80s, it was extremely, extremely difficult just to be in those spaces and to be acting out those roles. It is not necessarily a particular scene, it's multiple scenes where I’m just like, "Wow, I can't believe that these are the shoulders of the women that I'm standing on right now.” It's an honor. It's really mind-blowing.

What were some of the best parts about filming?

The ones off-camera. We are a family. We laugh. We joke. We support each other. We call Ryan Murphy "Daddy Ryan." He's like our father. We are his children, and we always make little jokes. Especially, between myself and the four other girls. The five of us, we have these political conversations about the state of the world, the movement of sisterhood, and how it's important for us to stick together. [We just want to] get the narrative of love across to the world.

Speaking of "Daddy Ryan," he has said that making Pose was an intensely personal process that was also heavily inspired by his love of Paris Is Burning. Did that film inspire you as well during this process?

Oh gosh, yes. I discovered Paris Is Burning when I was about 14 years old. I always felt that I was a woman, but I didn't have [the terminology to explain it]. Especially at that time, there were not a lot of terms like "transgender" and "intersex.” I stumbled upon Paris Is Burning through my best friend. I was blown away because I saw the most beautiful women. As I was watching, I didn't even know that they were transgender. I did not know that was possible, but it struck a chord in me. It [validated] what I have always felt about myself. I also discovered the ballroom scene and Paris Is Burning kind of around the same time—when I was about 15 years old. I joined the ballroom scene as a teenager, and I became one of the youngest mothers of a House in Los Angeles. It affected my life totally because I felt like myself, and it further encouraged my determination to be myself. It had a major effect on my life. And look at me now.

Tell me a little bit about your House.

I had a house in L.A.—the House of Rodale. I first was a member. The way it works is a House has a mother and a father, most times, and they have children. I was the princess of the House—meaning I was the main daughter. I won all the categories. I had the most status in the ballroom scene. Almost like a person who wins all the awards at The [Golden] Globes. They then told me that they wanted me to be the mother. That was unheard of. No mother had ever been my age, and I had no business being a mother. Then I had transitioned to the House of Allure. Now I don't do ballrooms anymore, but that was definitely an exciting time for me. It was space that allowed me to hone in on who I am. It was a space that allowed me to just be myself and be authentic. And that allowed me to take that authenticity into the world and [help me be] myself—fearless.

That said, there’s also some critique that a historic, visibly trans narrative is being helmed by a cis gay man. What would you say to comfort people who are skeptical?

Ryan has hired over a 100 transgender people on-and-off-camera—from the writers to the producers to the main characters to the background to some of the hair stylists and some of the makeup artists. Ryan may be cisgender, but Ryan includes the transgender community to get the story right. And if it took a cisgender man to do it and come forward, then I say, “What an amazing thing.” If I thought about Abraham Lincoln... Abraham Lincoln was there for people of that world—he was not a black man himself—but he took the initiative to do something that needed to be done. I think the beautiful thing about Ryan is that he includes transgender people to tell him what should be done or how this should go. He constantly asks us what we think and allows us to give our input to make this story right. What I have experienced from Ryan is a beautiful artist who wants to get the story correct. This transcends just the transgender story line. As an artist, I know that when Ryan does something, he wants to get it correct. I can appreciate that.

In so many ways he's been a dad to us, to some who don't have a father. I mean, I'm a preacher’s kid. So, you could imagine how my transition had been for me. To be around a man who is so genuine and so much of a genius and who wants to include us in every way possible—not just in front of the camera—I think it's a beautiful thing.

NEXT UP
Culture
The Madonna Biopic Is Being Scrapped
Culture
6 Shows To Binge Once You've Finished 'The White Lotus'
Culture
11 Must-Read February 2023 Books
Culture
Phoebe Dynevor Will Not Return for Bridgerton Season 3
Style + Culture, delivered straight to your inbox.