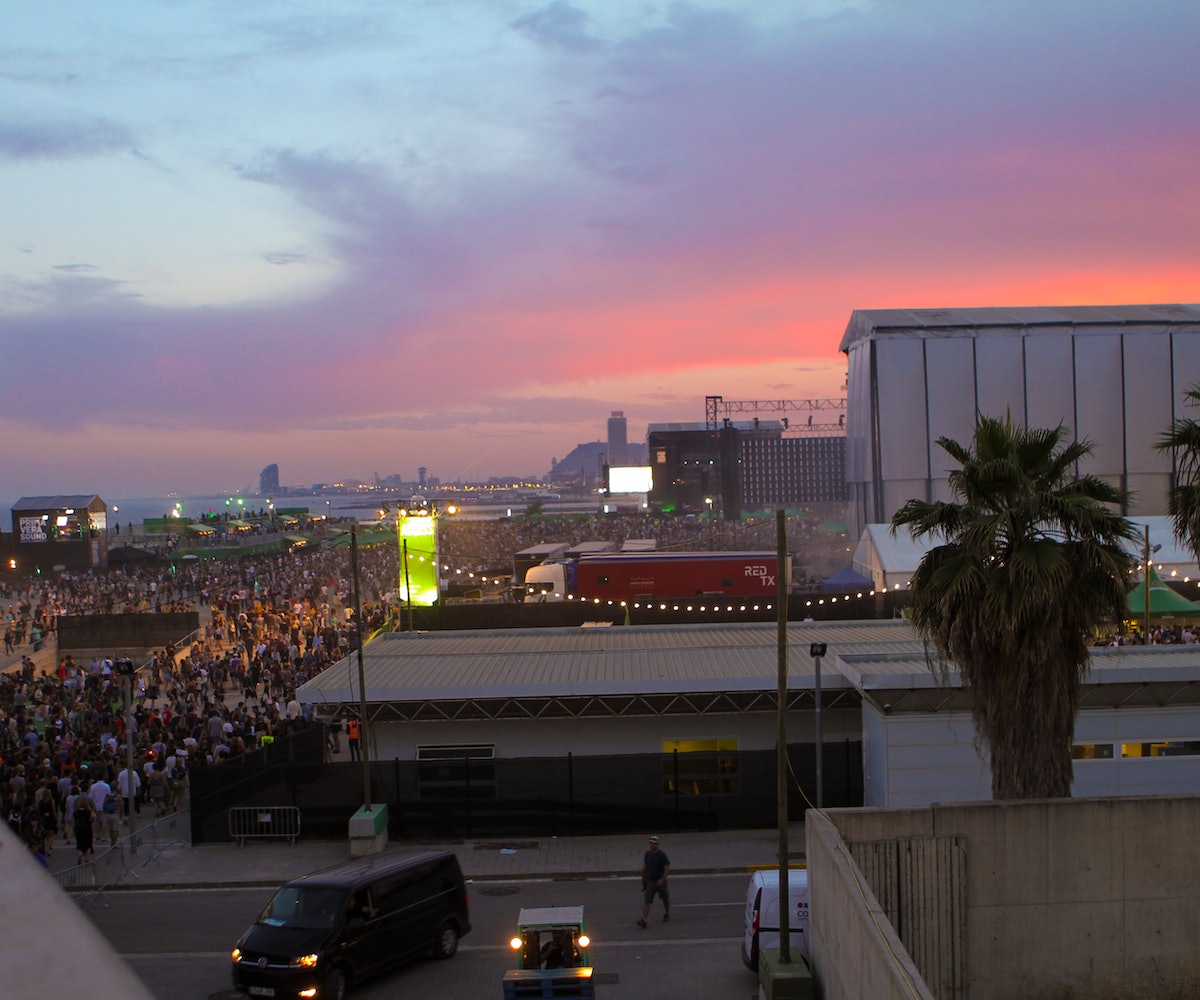 Primavera Sound is the Spanish music festival that seems more like a fever dream that's an impossible journey away, rather than a very real music gathering that's a quick (enough) plane ride from the East Coast. It beats Coachella—the largest music festival in the U.S. and Canada—in attendance by a cool 75,000 people. And yet crowd control and stage division are immaculate. Sure, you’re going to feel squished and mildly claustrophobic during the headliners, but you’ll be able to quickly escape if that’s your MO. For example, during Arcade Fire’s set, I successfully ran away from a gang of roving Hawaiian-shirted men in 10 minutes flat. That much flamingo print isn’t safe in close proximity for anyone, even if you are 100 feet from the sea.

Placed on Barcelona’s subtropical coast, the festival curves along the Mediterranean Sea, so close that during Seu Jorge’s evening set—Seu Jorge being the beautiful Brazilian guitar maestro who sings David Bowie’s hits in Portuguese—mist blew in from the water, coating fans who were already choking back communal love for the late rock star in a salty spray to match their tears.

Another claim to fame for Primavera is that the programming is consistently solid; headliners this year were Arcade Fire, Bon Iver, and The XX, with Frank Ocean (of course) canceling last-minute. But, as any music fest veteran will tell you, it’s the acts accidentally found during downtime that can make or break a festival’s booking prowess.

For the 17th edition of Primavera, it was reported that attendees came from 125 different countries. The artists playing came from similarly varied home countries. We caught up with three such acts, each traveling in from vastly different parts of the world, to chat about connecting with international audiences while on tour, the idea of home as an illusion, and finding balance while contrasting message and musical composition.

Noga Erez, an electronic producer with newly released debut album, Off The Radar, arrived from Tel Aviv; Jacopo Incani, an indie-electronic musician who plays under the moniker Iosonouncane, hails from the Italian island of Sardinia; and Mitski Miyawaki, a Japanese-American performer with an indie-rock band of volatile vulnerabilities, moved around and toured so much that she has lost the sense of home in the U.S.

“I don’t get homesick. I have no place to get homesick for,” Mitski says backstage after her Primavera set. She offers me the strange assortment of snacks the festival has left her: chips and quiche:

I’ve moved around so much that I’m used to looking at what’s around me and seeing how I can relate, instead of being like someone who doesn’t really tour and goes to a country for the first time and says, "Oh, this is so different." But, I think, I’m more accustomed to looking for ways that I’m the same and trying to fit in however I can.

“What I’ve learned is that no matter where you go, people are living ordinary lives,” she continues after I bring up the fact that she lived in 13 different countries as a kid. Still, this is her first time in Barcelona:

I think, from a young age, I understood going to a new place wouldn’t change my life. It wouldn’t solve any of my problems. I would still have my life, so I think I don’t have that romanticism, like, "Oh, I’m going to move to Paris and become a different person." It just doesn’t happen that way. You’ll still have to deal with yourself no matter where you go, and I think that’s affected my touring in that everywhere I go I don’t approach things as being exotic. Instead, I think, Oh, this is how people here live.

With the help of Jacopo’s promoter at Strawboscopic translating Italian to English and back again, Jacopo told me about how he approaches international festivals in order to best reach fans:

For the future, the goal is to become an international musician, which is not that obvious for an Italian artist who sings in Italian. It will be a first… And since it’s an international audience, he decided not to bring any songs from [La macarena su Roma] because it’s too wordy. So he only played his latest album [Die], which is the opposite lyrics-wise.

While Noga Erez sings her lyrics in English, she also focuses on candidly detailing the socio-political atmosphere of growing up and living in Israel, a relatively new country at just 69-years-old. This means her lyrics are about government extremism, a rape caught on video by nearby witnesses who refuse to help, and media manipulation. The dense topics and electronic musical composition create an aggressive and ultimately cathartic opportunity for her fans to dance the pain away. I caught the last song of her daytime Sunday set, “Dance While You Shoot,” and people could not stand still.

“I don’t intentionally try to create a contrast between the music and the lyrics,” Erez explains to me via Skype a few days later:

I think that in a way, even though the music is very upbeat, you can really feel the intention behind the words. When we produce, we try to give an atmosphere—this always comes together with music that is reviving. I feel that it’s very interesting how authentic it is because we live in this duality. We’re always somewhere in between good and bad, or whatever opposites you want to choose. There is a complexity in it that I think you can really capture in music.

That attempt at capturing dual complexity continues when translating the everyday essence of Tel Aviv for an international audience:

There is a cultural tension and a social tension… I think people would assume that if I talked in a critical way towards my government, then the media would respond to me in a negative way, but the fact is that the media in Israel is in opposition to the government. The electronic scene in Tel Aviv is the most well-known scene because the nightlife is such a big thing. Clubs and bars are [open] all week long and night long and it’s endless, so there’s a very good platform for electronic musicians to grow in Tel Aviv.

Now that the last of the crushed Heineken cups have been picked up and the stages torn down, the three artists continue on. Iosouncane is headed home since Primavera was the last gig on a long European tour, Noga Erez is off to promote her debut album, and Mitski has shows on top of shows, including a short tour with the Pixies in October. The fever dream is over, but the music continues.