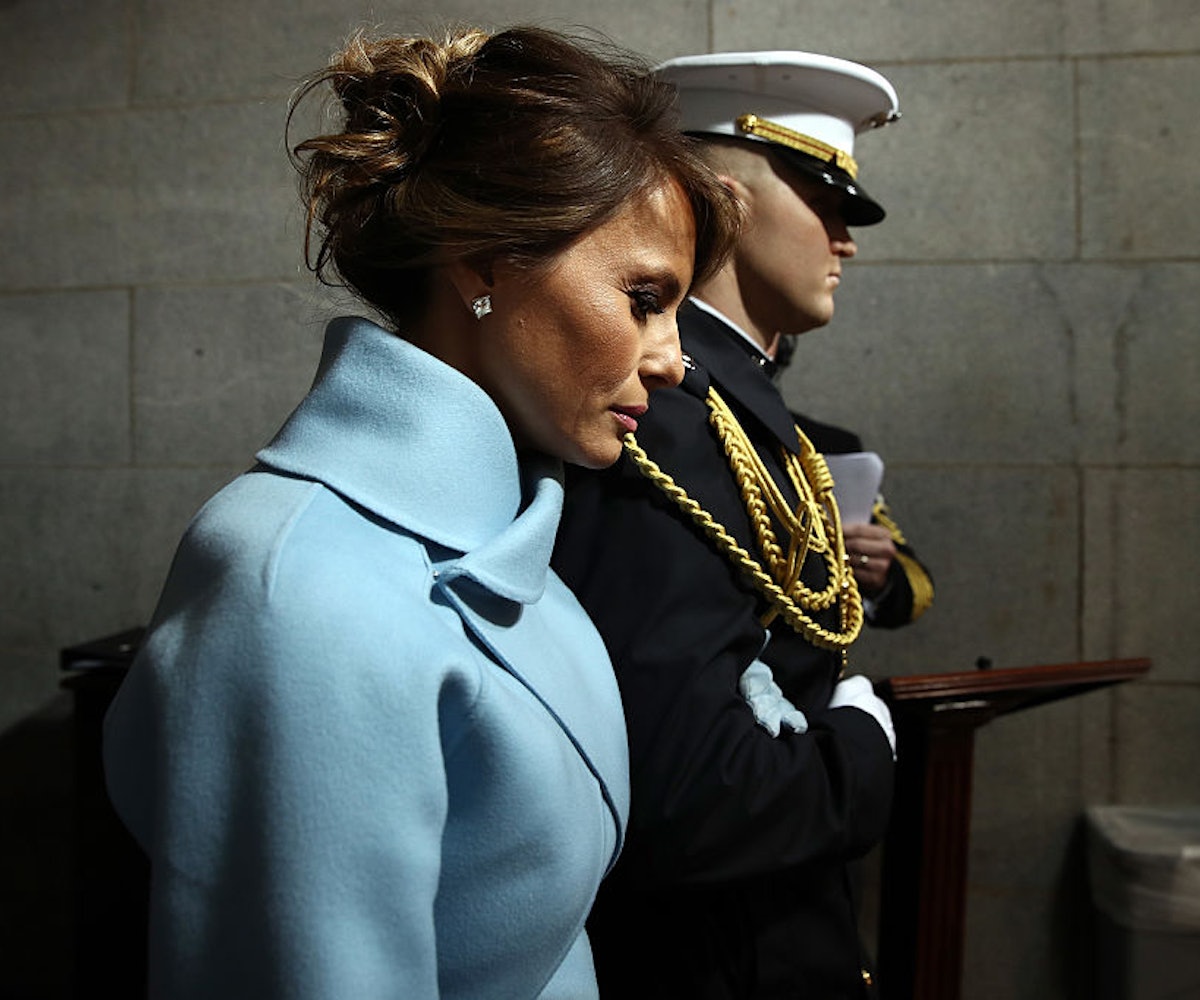 Here are the things we know about Melania Trump: She was born in Slovenia, though it was then part of Yugoslavia. She's a Taurus. She worked as a model, including starring in a Camel cigarette ad campaign. She admires Michelle Obama. She has an affinity for sea creatures. She wants to work toward ending bullying on social media. At 5 feet 11 inches tall, she shares a height with Eleanor Roosevelt. She didn't graduate college. She speaks five languages. Her hobbies include pilates and reading magazines. When she married Donald Trump, she signed a prenup. She once told Howard Stern that her sex life with Donald Trump was a "great, great time."

We know all these things about Melania Trump and yet she is more often than not described as being enigmatic and unknowable. "Who Is Melania Trump?" is not just a popular headline to the many magazine profiles of the First Lady, but it is also an unspoken refrain behind the many people who analyze years-old tweets she's sent or question whether or not her husband trusted her to vote for him. She's such a mystery, the subtext always reads, there must be more there than meets the eye. Right?

Recently, but particularly in the last week, leading up to and following her husband's inauguration, Melania Trump has been increasingly in the spotlight, and the spotlight has been incredibly sympathetic. Images and video clips from Inauguration Day, in which Melania is seen momentarily abandoned by her husband leading up to the steps of the White House, looking dejected at a luncheon, and going from smiling to dismayed following a few words by the newly sworn-in president, have gone viral.

And along with them, so has a hashtag calling for Melania to be freed. Not dissimilar to another hashtag, asking for the freedom of Tiffany (Trump's second daughter, by his second wife), which started to crop up after it became clear that Tiffany was always going to take a backseat (often literally, like during the debates) to Trump golden child, Ivanka, #FreeMelania is driven by feelings of sympathy and pity for Melania, and an idea that she is an unwilling player in the dramatic tragedy now known as America.

I'll admit that I have shared in that sympathy; while driving back from the Women's March in Washington, I said to my boyfriend that I felt pity for Melania, rather than the pure, clean hatred and contempt which I feel for every other adult in the Trump family (this includes Jared Kushner). My boyfriend expressed surprise (again, he knows how I feel about the rest of that vampiric crew), and I tried to explain that there was just something about her that I found so pathetic, from the Tiffany box she handed to Michelle Obama to the way she tries to emulate her heroes (Obama, Jackie Kennedy) that always comes off as a pale imitation.

I said this before the flood of unhappy Melania photos had flooded my social media feeds, but all of these images made me think about my sympathy for Melania more—and this did not, as it turns out, lead to an increase in that emotion. Rather, the more I thought about Melania the more I realized that while some of my sympathy is undoubtedly derived from the fact that Melania's many dismayed facial expressions are incredibly easy to meme and view as reflective of the way so many of us feel about Trump and his presidency, Melania benefits from one very important quality here: In all these images, she's mute. When Melania is not speaking, she lends herself to the same kind of reactionary respect from the masses as does Ivanka. Why is that? Because they are both beautiful, well-dressed white women, the very type of person our culture has demanded we admire and emulate for generations. It is easy to sympathize with Melania because American women—no matter their race or ethnicity—are taught by society (though not necessarily, hopefully, by their families and educators) that a woman like Melania is meant to be nothing short of worshiped. Our culture recognizes Donald Trump as a boasting, blustering, business buffoon, qualities which, in a white man, are still admired even when mocked; and so Trump is either beloved or detested, and he gives the American public ample ammunition to feel one way or the other.

Melania, though, like Ivanka, is different. As the wife of someone like Donald Trump, she is thought of less as an accomplice and more as an accessory. We want to believe that she has no agency because women like her are thought of as decoration, almost; never complicit with the terrible things happening around her, but unsure of how to break a vicious cycle. It's easy enough to feel this way when Melania stays mute—which she mostly does. But if you pay attention to the words that Melania actually has said (and not the ones plagiarized from Michelle Obama) and the issues upon which she does choose to speak, it becomes quite clear that Melania does indeed have her own voice—and it sounds a lot like her husband's.

A video of Melania from 2011 has been circulating in the last day or two, and it shows Melania vociferously defending her husband's quest to see Barack Obama's already available birth certificate. Melania parrots the absurd charges of her husband and insists Obama never made his birth certificate available. Other times she's chosen to speak out, have included when she defended her husband after the release of the audio in which Trump bragged about sexually assaulting women went public. She also attacked the reporter for People who accused her husband of rape. Every single time Melania has had a chance to show herself as having a different position than her husband, she has refused to take it. And yet she still elicits sympathy from those people who are conditioned to expect what is viewed as a paragon of womanhood—beautiful, docile, a wife and mother—as being fundamentally good, even when she shows us, over and over, that her agenda is not intended to benefit all women, it is intended only to benefit herself. And in that way, she is like the majority of white women all across America.

Lest we forget, over 50 percent of white women voted for Donald Trump for president. And yet, following the election, as women across America (a majority of whom, collectively, voted for Clinton) sought to make their voices heard and channel their anger over the idea of a Trump presidency, many of the white women who didn't vote for Trump refused to cast a critical eye on their white sisters. Instead, as was seen in the lead-up to the Women's March, many white anti-Trump women thought the language of the movement was divisive, simply because it accurately reflected the fact that white feminism is exclusionary to women of color, among others. Rather than actually listen to the fact that so many white women had voted against the interests of not just American women but America as a whole, these highly sensitive women decided to sit out the march because they felt excluded. They refused to see the inherent problem with so many white women—including themselves—which is that, historically and contemporarily, white women have used their privilege to deflect criticism, receive sympathy, and benefit from living in a patriarchy which privileges white people above all else.

This is a problem. It is, in fact, the problem with Melania and Ivanka and even Tiffany Trump. These women have shown us who they really are, and yet so many people refuse to think they're capable of it. It is their support of the despicable behavior of Donald Trump what has enabled him to achieve the highest office in the land. By casting these women as victims, and stripping them of their agency or appealing to their "better natures," we are no better than the people who voted for Trump who were unaware he planned on doing away with the Affordable Care Act and funding for Planned Parenthood. By sympathizing with Melania, we become complicit in the narrative that women are powerless to fight for what they believe in and are prone to standing by and supporting the type of man who would happily tear us down. The way we solve a problem like Melania is by listening to what she says and watching what she does and doing everything we can to make sure that she is judged accordingly.