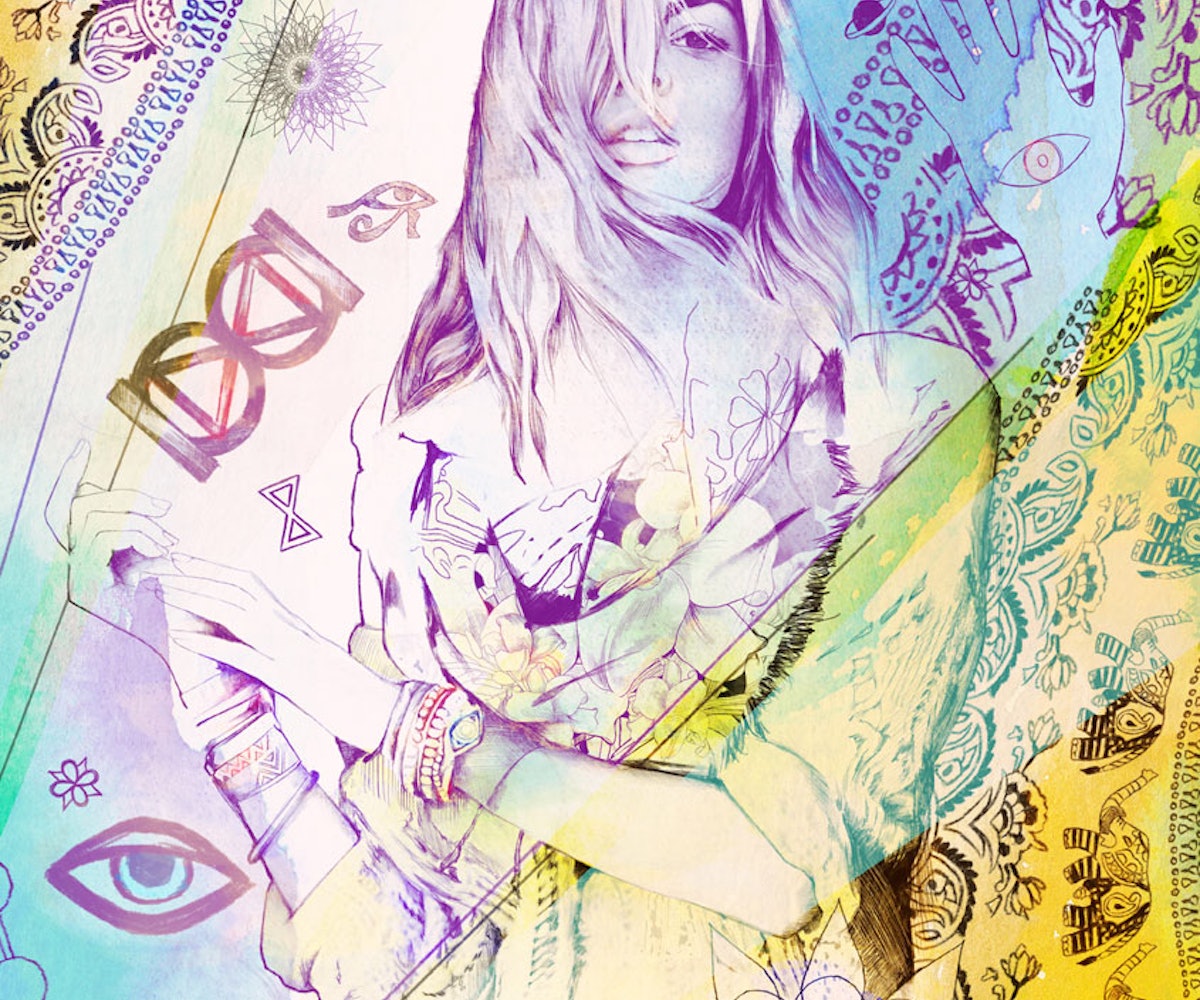 “Go ahead and join the bubble.” Reverend Natalie Villeda, director of the Berkeley Psychic Institute (BPI), is beaming at me. With her raven tresses, artsy dress, and high-heeled boots, the stylish Salvadorian-Sicilian has already somewhat shaken my faith in my inner third eye.

Despite a lifelong intuitiveness, I mistakenly envisioned “Reverend Natalie” as a tunic-clad, middle-aged white woman, and BPI as an incense-infused hippie temple. Clearly my perceptive powers need some fine-tuning.

I’m on the mezzanine floor of an office building, and the 36-year-old Villeda is an intrepid, modern beauty. She gestures toward a circle of office chairs, where students—black, white, Asian, Latino, college-aged, middle-aged—are “grounding,” eyes closed, palms up. I take a seat, knocking into every single chair with my backpack, and assume the bubble position. (Hands cupped or flat? What if my eyes are open justatinycrack?)

Tonight, my spirit has boarded a school bus, waving goodbye to its formative years. I’m the awkward new student in BPI’s “psychic kindergarten.”

“Do you want an aura healing?” Clairvoyant Program grad Lealah Johnson asks, approaching my chair. I nod. No one’s ever offered to heal my aura.

Johnson, a graceful woman, with long braids and gold sequined shoes, is part of the family behind Marcus Books, the nation’s oldest continuously black-owned bookstore. As a child, she experienced energies of which she never spoke, afraid no one would believe her. When her older brother was murdered, Johnson’s mother helped the family heal by tenderly speaking of her brother’s spirit. This helped Johnson find a voice for her own experiences—eventually leading her to the BPI.

A dance teacher by day, she floats her hands like languid birds around my body. “There’s purple energy in your left shoulder,” she says. “Three people at your job are all working on the same projects, and it’s frustrating.” My left shoulder is killing me, and exactly three people at my writing job are sorting out assignments. I’m still processing that nugget when Johnson calmly asserts a truth of my recent relationship. I have to admit, her hands are sifting across my auric braille with impressive clarity.

Perhaps not everyone can read with Johnson’s conviction, but the BPI asserts that all regular folks have some inner psychic potential just waiting to be tapped. Is there a way to span the distance between sporadic human hunches and fine-tuned seeing? I’m here to find out.

“Connect your grounding cord from your first chakra to the center of the earth,” instructs Villeda. “Your cord can be something funny; maybe a high-heeled shoe.”

She’s been cracking jokes all night, helping the meditation class (around 10 of us, including several online students) move through seriousness with “the tool of amusement.” It turns out psychic kindergarten is not the name for the program, but rather an umbrella concept. Hilarity rules.

I sprout a unicorn horn where a tail would be, and plunge it into the earth. We drop people and events down our cords to ground them (“I’m dropping all my ex-boyfriends down!” exclaims one woman). We also imagine ourselves on the roof, while we simultaneously eat crackers. The feeling of seeing one’s self from afar, while mustering the coordination to be the one chewing, is fascinating. We then pull “golden suns” down into our bodies to restore our energy, and I feel strangely lighter post-class.

Meditation may be more socially acceptable now than it was in 1973, when Lewis S. Bostwick founded BPI, as an extension of the Church of the Divine Man. Everyone and their grandma does yoga these days. But what does meditation have to do with psychic training?

“BPI meditation is a lot like taking a shower every day,” says Villeda, who has been learning and teaching at the institute for 17 years. “Your aura, your energetic self, collects grime, layers of stuff that does not belong to you.”

For this reason, the BPI treats its meditation course as a 101 prerequisite for new students. Like a windshield, when the aura is clean, it’s easier to see.

I decide it would be a disservice to my aura not to give it a two-hour reading by the Institute’s Clairvoyant Program grads. When I approach Villeda to inquire, she says, “Just show up on Monday at 8 p.m. They already know you’re coming.”

They spend two hours tag-team-sensing my inherent psychic abilities, coloring the layers of my aura—literally, on the paper—and telling me about my past lives. I am challenged (Maybe my pragmatic intuition is higher than 61 percent?), and entertained (“That part of your aura is supposed to be forest green!” Martinez laughs, because she can only find a brown crayon).

I’m also fascinated. A past life, read by Shiningstar, contains so many specific themes of the life I’m currently living that tears well up. “You can come back any time, if the world seems strange,” says Martinez. “Even just to say hi to us!”

I dress for healing class, another entry-level course that follows meditation, in a hoodie with bright gold lettering: I woke up like this. Johnson is the first person I see when I enter the BPI, and her shirt is emblazoned with similar block letters: Free your mind. Amusement!

“Fashion is a huge part of my life. It’s a part of my creativity,” says Johnson. “That doesn’t stop because I spend four hours a day meditating. I still want to wear heels and put on some lipstick.”

Reverend Chihiro is teaching tonight’s class, and when we create our grounding cord, she reminds us, “If anything is bothering you, just shake your butt!” Again, I’m impressed by the array of students, from a middle-aged black man to a young white woman attending online from New York. (Students from as far away as Japan and Germany have virtually studied at the BPI.)

I’ve missed the beginning of the series, where students were assigned their “healing masters.” I therefore participate by being the object of healings. Shiningstar demonstrates a chakra healing on me, and, no joke, I feel a prickle moving up my body, in tandem with her hands. She stops for a long time at my forehead, the third eye. “Deep cleaning,” she explains.

After class, with fresh chakras and a sparkling aura, I strut to my car. It’s 10:15pm,  and I’ve been up since six, but psychic kindergarten infuses you with energy. It also makes you ravenously hungry. I strut past Trader Joe’s with dismay. It closed at 10.

I’m unprepared for my next class: advanced clairvoyance. BPI’s Clairvoyant Program is one year for students 37 and younger, two years for those 38 and over, with 15 to 25 hours of work per week. According to Villeda, the age split is due to increased “layers around pictures” (I understand this as ingrained patterns) that happen over time.

Aside from enrolling in meditation, there are no pre-requisites for what feels like BPI’s most unique offering: this veritable psychic college. Students I speak to are clear: Constantly grounding and clearing, developing the confidence to believe in and say what you see, and filtering through all your own B.S. during the process is serious work. No one receives a pass to Berkeley in “Psychic Idol” auditions. Clairvoyant students are there because they want to be.

After grounding in a group, we “blow roses” infused with things we want to de-energize, exploding them (I make sure to detonate mine with movie-style special effects). Then, the different categories of students split off, and I’m with the advanced class. There’s a depth of vulnerability I hadn’t expected with attempting to see at that level. I try to unroll “film spools” inside the other students, but I can only conjure an Oriental rug pattern. No pictures. It’s a relief when the instructor, Glenda, tells a dark-haired woman in bright nurse scrubs to read me.

Not more than a minute or two in—something happens. My reader’s “second chakra is lighting up,” and Glenda tells her she “doesn’t have to look” at whatever she has seen in me.

After class, I pull my car into a row of nighttime lovers and curfew-busting teens at the Berkeley Pier. I’m starving, but I only have a stupid peanut butter sandwich and grapes. What did she see? Did I do something wrong? The sandwich is dry; I shove whole grapes inside of it as my thoughts spin. Eventually, I look down—I have built an entire grape layer. This jelly is made of 100 percent fruit. No, really, I mean 100 percent of the fruit.

Later, I will tell Johnson and another student how I ended my advanced clairvoyance class parked at the Berkeley Pier, facing doubts, and ultimately laughing to the point of tears over a peanut butter and grape sandwich.

They will independently have the same two-word response: psychic kindergarten.

Intuition may be ubiquitous, but it seems that at the advanced levels of training, moving forward involves the kind of dedication of a master artist or athlete. Which isn’t simple. However, with an eclectic community, a 42-year-old curriculum, and a lot of laughter, it seems possible.

A fluorescent yellow poster hangs on the wall of BPI. The top reads, “Are you ready for the Clairvoyant Program?” The rest of the poster is blank. At the end of my week, I’m convinced that this one unassuming poster says it all.