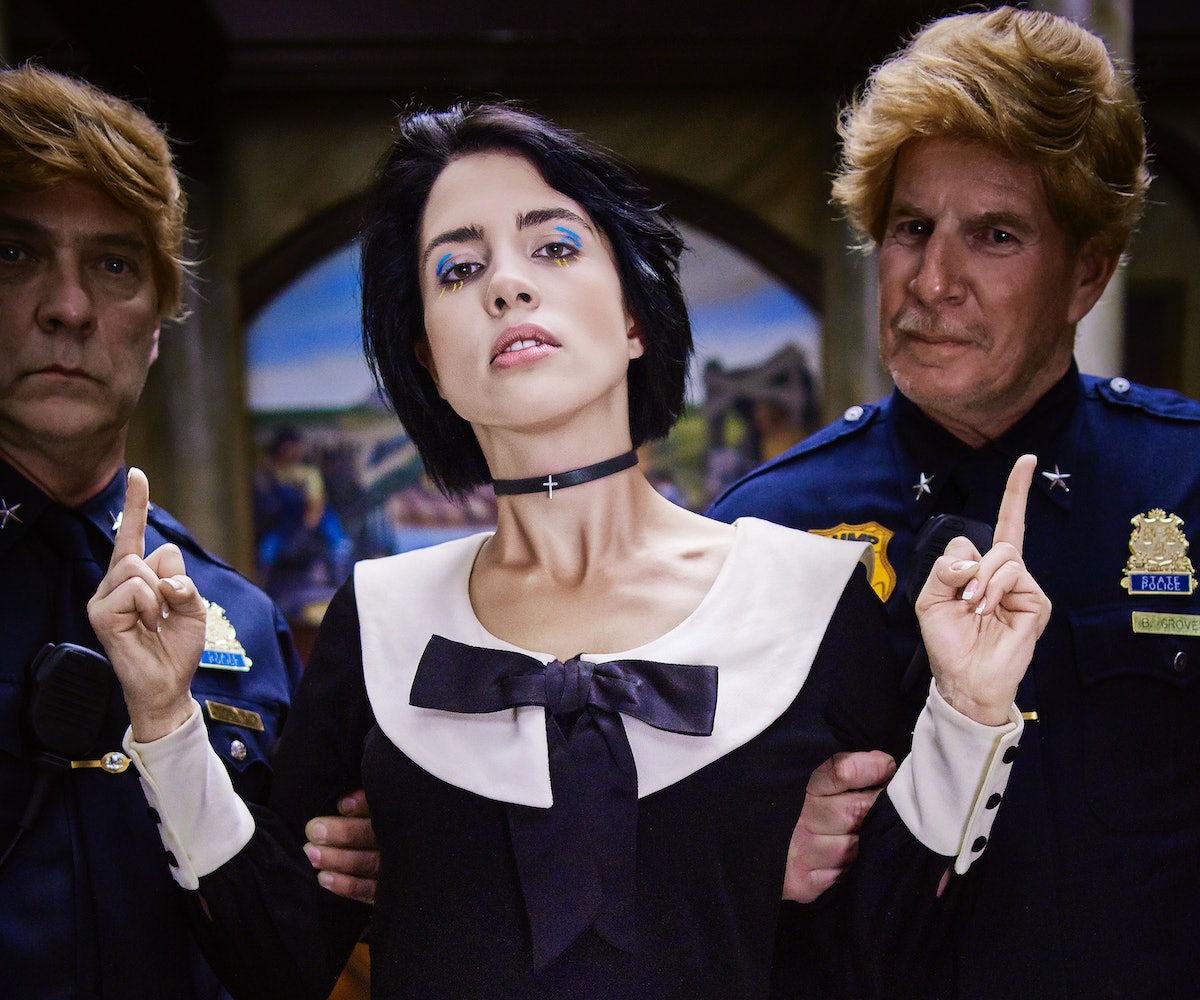 It’s no secret that Pussy Riot’s Nadya Tolokno has been to hell and back, but it's all been for good reason. Tolokno believes in freedom of self-expression, women’s rights, and equality—and it's her beliefs which ended up making Tolokno spend two years in prison for in Russia after performing with band Pussy Riot in a Russian church.

How do you feel like your EP resonates after last week’s election results?

Honestly, I feel pretty bad for a lot of people who I’m friends with. No one knows how it will be. It’s not the end of this journey. I know a lot of people are upset and disappointed right now, but I’m trying to think about what this election will bring. We cannot forget about all of the bright moments of this election. I think Senator Sanders brought a lot to political discussions. He shined a light on a lot of economic problems. I think everyone was very surprised around the country and around the world. There should be feminism in everyone’s hearts. It shouldn’t just disappear. It sucks to have Donald Trump as president, but it’s important to remember that nothing will be good without us trying to do something. If we just let it go, it will be a scary world where Putin and Trump are presidents. We have to accept we’re moving in a really scary direction of a world order, but there are a lot of things we can do with that. We have to keep fighting.

Do you feel like you saw the election outcome happening with Donald Trump winning? Is that why you put out the EP?

I couldn’t say that when we put out the EP that Donald Trump would be president. I wanted to make political comments about what’s going on. You can’t always win, but at least you can always speak your mind. I still believe we can do a lot of things. Activists should keep fighting. I have a lot of feminists around me who will be more active and politically involved now. I think with Donald Trump as president, we could make the world a better place. It’s not the end of the story—we have some time. It’s not the world where I want to live where Trump and Putin are presidents.

What do you think a Trump regime looks like in comparison to Putin?

I think his attacks on reproductive rights are really terrible from my perspective. Putin’s big statement about banning abortions in Russia hasn’t happened yet, but there are conversations about it. It’s still scary. If that were to happen in America, it could be dangerous for reproductive rights all around the world. We have to stick up against that. It worries me a lot that Trump said he’d put Hillary Clinton in jail. I believe in diversity, and I believe that we don’t have to agree with everyone that lives on earth, but as a person who spent two years in jail for speaking up against a country, I don’t appreciate [Trump’s] behavior.

For the video “Make America Great Again,” there’s so much skin branding in it that it’s painful to watch. Tell me about why you put so many shots of having your skin branded in the visual.

When Trump was running for president, he made a lot of really painful statements toward women, people of color, and Muslims. In this video, I wanted to show that words are not just words—they cause painful actions for all of the groups who have been degraded by Trump’s statements. That’s why I decided to make this connection between words and physical pain with the burns on my skin. Even when Trump was running for president, a lot of people were suffering because of his rhetoric. Words can really harm; they can cause damage.

Tell me about the artistic direction for the “Straight Outta Vagina” video.

The song started with a phrase that popped up in my head: “Does your vagina have a brand?” I think women have at some point wanted to sell their vaginas in order to get something in the world. I question why women will do that and behave this way. Now we have better role models for women. We are able to be independent and enjoy our vaginas and not treat them as something you can sell. That’s why I wrote the song. The video is an advertisement for society—that’s why you see men in lipstick and high heels. It was really important for us to show that everybody will be happier in a society where people don’t care about gender norms. It was really important to keep the video innocent. We didn’t want to have the video go too sexual. We wanted to speak to people of all ages, so there aren’t too many sexual elements. It’s more about government.

How do you think the relationship between Russia and the U.S. will change?

I think Russia is still trying to understand who Trump is, but now Putin is praising Trump. Every part of Russian propaganda is praising Trump’s victory. Basically, Russia helped Trump to be elected to president. Trump is an unpredictable person; he’s very emotional. I don’t necessarily think Putin will enjoy his relationship with Trump.

My goal is to make every song different from another. I really do like to challenge the rules. I don’t really want to stick with one genre of music. Maybe I will come up with a political piece of music, maybe it will be a piano song, or a Russian traditional piece of music. I want to question every status quo. It will be different than what you’ve heard before for sure.