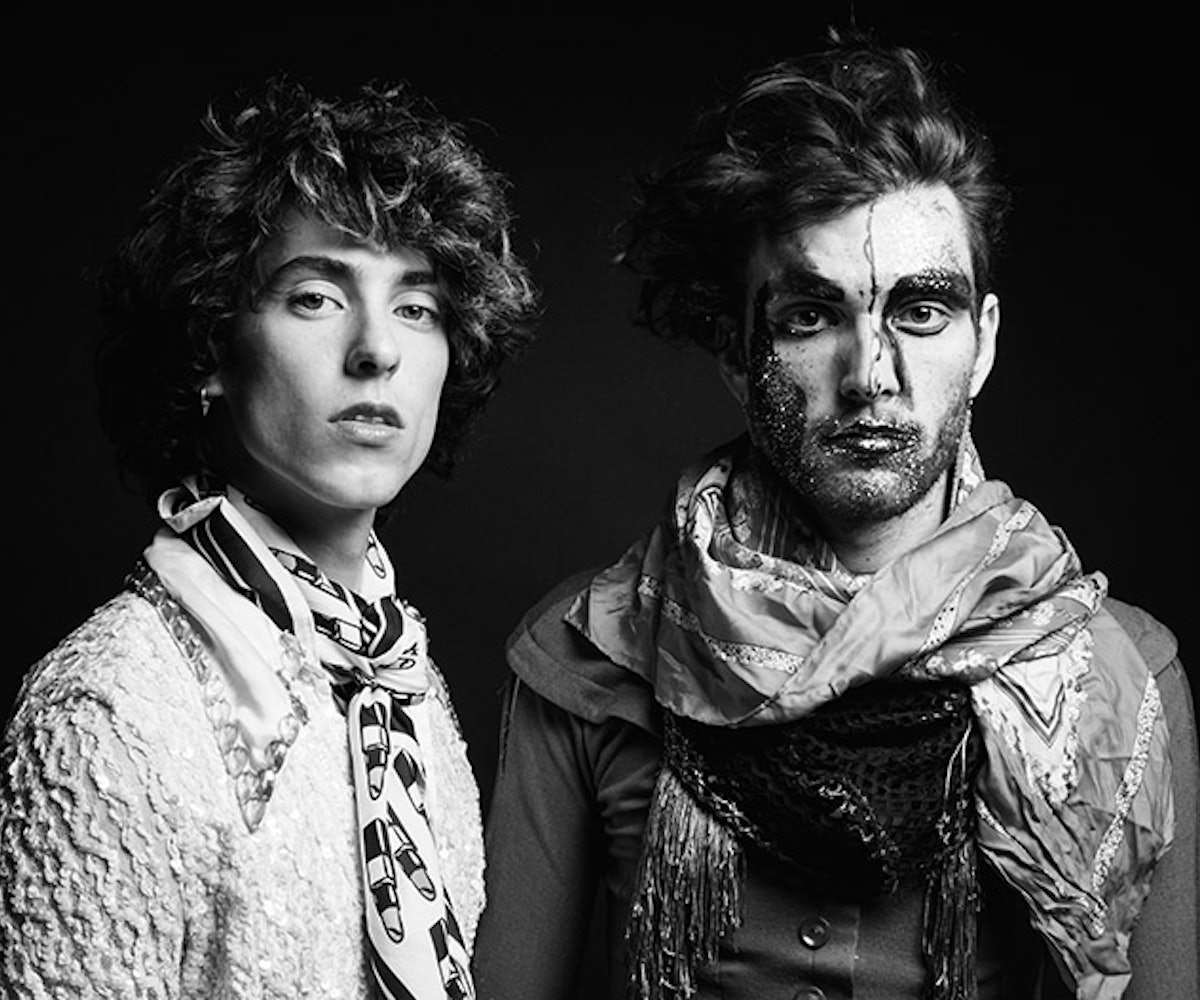 Open any dating/hook-up app and you're going to be asked some variation of "Looking?" You'll probably fire off some generic response, so as not to come off as too demanding, and just hope the human behind this newfound match lives up to your wants and needs. But, like Alanis Morissette says in her wildly underrated 2002 song "21 Things I Want In a Lover," it's better to be detailed "since [you] have a choice in the matter."

Consumed with the details is where we find Brooklyn, New York-based band PWR BTTM in their final Ugly Cherries video installment, "I Wanna Boi." The song itself is a shameless list of qualities co-vocalist and drummer, Liv Bruce, wants in their lover. With tongue planted firmly in cheek, Bruce and co-director, Anneliese Cooper, bring the Ugly Cherries track to life with Bruce parading around a mansion, alone with a blow-up doll for a partner. It's a rich and provocative visual, but sullen. Where is the boi that likes it when lipstick bleeds? Out there somewhere, we hope.

Ahead, catch up with the band before they head off on their big headlining tour and get lost in "I Wanna Boi."

What is "I Wanna Boi" rooted in?

Liv Bruce: "I Wanna Boi" is rooted in loneliness. I wrote it at a point in my life where I was so convinced I would never be in love with someone that the idea of looking for someone was almost funny. The song is a half-serious, half-joking personal ad.

Why did you decide to use a sex doll rather than another human for the video?

LB: I wanted to make a music video where I date an inflatable mannequin because the song is about the unrealistic fantasies you build up around love when you're single. Those fantasies reveal themselves to be just as awkward and precarious as reality when they come true.

What did you set out to do with Ugly Cherries?

LB: We set out to make a record that we'd enjoy. I think we also hoped that other people might enjoy it and connect with it, but the primary goal in the studio was always to make music that was exciting to us.

How has life post-Ugly Cherries been different?

LB: It's been totally different but also totally the same. We get to do all these incredible things we always dreamed of, like go on tour for a month or do an NPR Tiny Desk Concert, but we're still the same people.

If you could describe PWR BTTM in emoji, how would you do it?

LB: So I guess those two! Probably three texts worth of them alternating back and forth.

Where do you find courage?

LB: I'm inspired by characters like Eleven from Stranger Things or Gracie Hart from Miss Congeniality, people with a sense of purpose who are beautiful and powerful, sometimes at the same time but not necessarily. Also in a stressful situation, I'll listen to “Impossible” from the Whitney Houston-Brandy Norwood Cinderella movie. It's a total earworm and good to have in your head when you're doing something impossible!

How has PWR BTTM allowed you to explore your identities?

LB: I think it's given me space to play and grow into myself. To me, songwriting is almost a form of magic, a crystal ball that shows you the inside of your brain in flattering lighting and slow motion. Every time I write a song, I learn something about myself.

Why is femininity important to both of your identities?

LB: I don't know if I have one solid answer as to why femininity is an important part of my identity. What's important is that it IS part of me, and I'm finally figuring out what that means after years of suppressing it.

How does it make you feel when someone asks you what it's like to be queer within the music industry?

LB: It depends on the context I think. Sometimes when someone asks you what it's like to be queer in the music world, it's like they don't believe that it's difficult and they want receipts for your experience. I'm hesitant to give those because it threatens to make the narrative about those small individual moments of oppression or aggression. What's exciting to me is the opportunity contribute to conversations about how queers can change the culture we live in, which includes the music industry but also so many other little worlds.

Which song of yours fits the following situations and why?

LB: "Dairy Queen." It makes me feel like moving!

LB: "I Wanna Boi," because it's a very lonely song.

Getting ready for a night out?

LB: "1994." I feel like that song makes me feel cool, which I think is important for a night out.

LB: Oh my god, I have no idea! I think if anyone puts on their own music before sex that's a huge red flag.

Finally, what's next for the band?

LB: We're actually in the studio making another record right now. I could tell you more about it, but I'd have to deflate you.