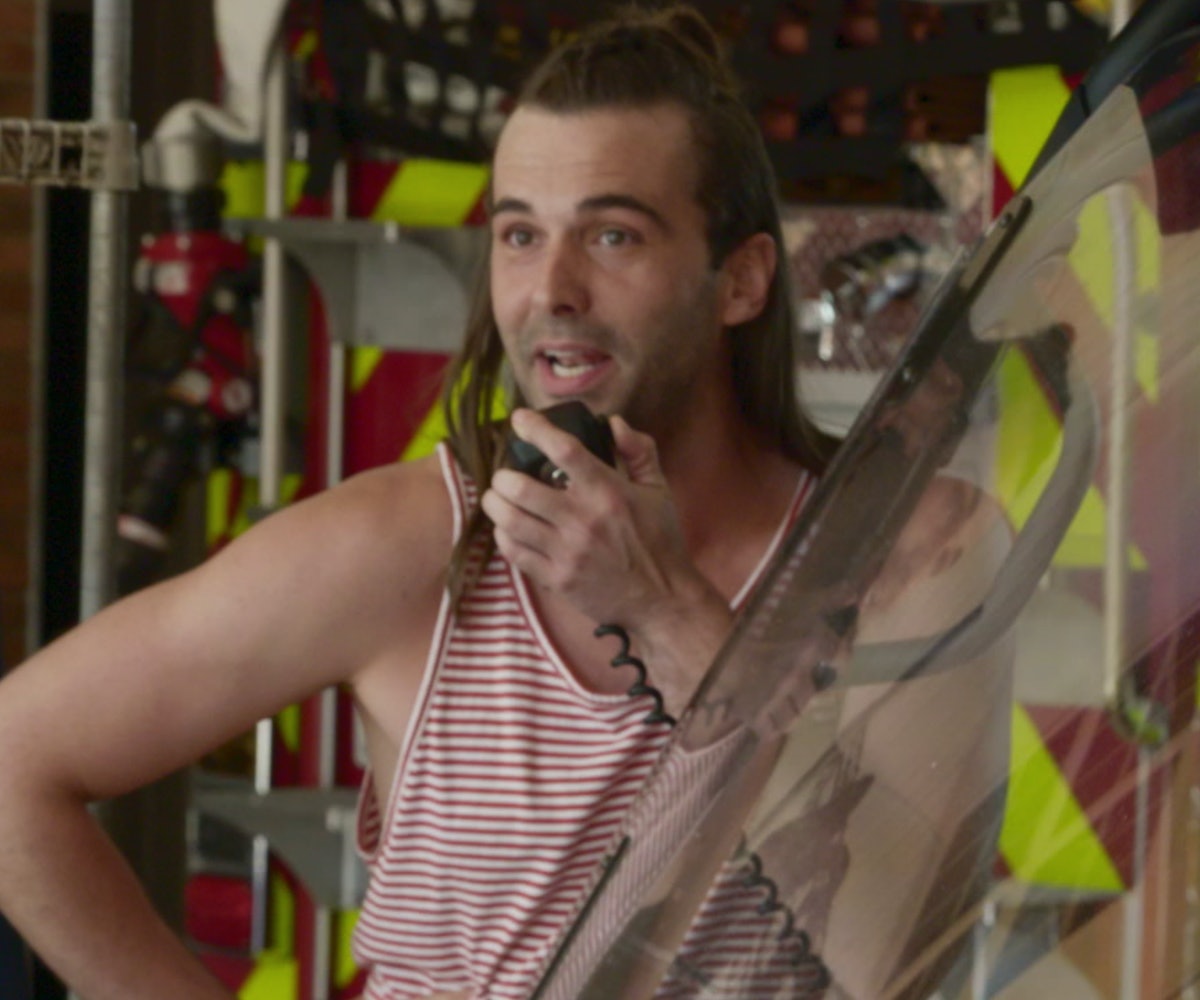 With a few facials and an endless supply of boundless positivity, grooming expert Jonathan Van Ness has quickly captured the hearts of Queer Eye fans—one pop culture quip after another. Always ready with a smile, Van Ness’ heart of gold is arguably what grounds the show and continues to help propel it forward as a beacon of positivity amongst the garbage fire that is our world today. However, it wasn’t always so easy.

Ahead of Season 2, we spoke with the grooming god himself to talk about everything from what the fuck is going on in Westworld this season to some of his most formative life experiences—as well as whether he’ll ever cut off his famously luscious locks. Read our Q&A with him below, henny!

Thanks for taking the time to talk with us. Are you tired from all these back-to-back interviews?

I'm full lying. I'm literally full lying, but I didn't want you to feel like I wasn't in a gorgeous mood, and I am! I mean, I do love an interview. And it's like, you always hope that people are going to want to talk to you that you have to remind yourself that, even if you did eight in a row, it’s like, You wanted this for so long, Jonathan. So get grateful! Get in that gratitude! You better Queer Eye your opinion on interviews, girl.

I just love your positivity. How do you manage to keep up such a great attitude in this world where there's literally a new garbage fire every day?

Okay, picture it. You're a really, really, really flamboyant, effeminate gay kid. Born in Reagan's administration, and then spent the first four years of the Bush administration, in the height of the AIDS/HIV epidemic, in a really rural little Illinois town that had no gay people. So every day since my birth... was kind of a new dumpster fire. [It was like] dealing with a new dumpster fire daily, but I always kind of still was able to have fun. Some days were easier to do that than others, but I was never in that good of a social environment growing up. So I think I learned how to make lemonade pretty soon in my life, and I think I've definitely carried that through into my adulthood.

On that topic, confidence is obviously something you have to work on and build. What was that journey like for you?

[But for a] long time it felt like a struggle... my 20s were really pretty dark. I lost my stepdad, who was very much like my dad. He'd been my dad since I was six. And I have a great relationship with my dad, too, but I was really, really close with my stepdad, who we lost in July of 2012 to a really horrific, three-year battle with cancer. Then my mom, literally six months later, got diagnosed with a really severe case of ovarian cancer. But now, gratefully, she is four years cancer-free.

But a large part of my 20s were dumpster fires, and so arriving toward the end of my 20s—having weathered those and come out on the other side, standing up and feeling good about myself—my 30s have been amazing. My 30s have been so fun. So now I feel like it's not so much three steps forward, two steps back—I'm feeling like I'm antelope springing [many] steps forward. And it wasn't always like that, but I'm enjoying this new antelope-esque pace.

I’m happy to hear that. Speaking of Gay of Thrones, you spoke to us earlier this year about your favorite TV shows. I was curious to hear your thoughts on Westworld Season 2 since you were excited about it.

I feel like they are slaying this season so hard. It's so good, right? I'm obsessed with it.

I'm mostly confused, to be honest.

What are you confused about? I'll tell you. I'll help you figure it out.

Well, you know what, I do get a little confused about [some of it], but I just don't think about it too much. Sometimes I feel like there are rules from Season 1 that they break all the time. Like, how in Season 1 the robots were never able to see anything that [made them question their existence]. But now that they're in Shogun World, if Maeve was a threat to them—or if any of these people from Westworld could hurt the robots in Shogun World—why are they able to see them? Wouldn't they just be, like, not apparent?

But whenever I have questions like that, I just think, Maeve probably just switched around the settings and fixed it, so it's not like that anymore. They really can do no wrong for me. It's so good, I don't care. I'm obsessed.

I just hope that [Thandie Newton] and Evan Rachel Wood don't get in a queen battle royale and kill each other because neither one will submit. I really don't want an Aaron Burr-Alexander Hamilton situation happening.

They're probably going to Red Wedding it. One of them's going to die. I have a bad feeling.

What about the Roseanne reboot? I know you talked about it with us before, so what did you think of that cancellation?

I did think it was problematic. Especially [Roseanne Barr]. But I was thinking Wanda Sykes and everyone else involved [would make it okay]. But everything's been said and done. I 100 percent understand why ABC [canceled the show], and I agree [with the decision]. But at the same time, I feel terrible for that cast and crew. So many people worked so hard to bring that show to light, and people were really liking the content, and it's such a shame that Roseanne Barr's racist-ass mouth had to cost everyone that.

On another token, I've heard some people say, "Did ABC go too far? Is this a freedom of speech thing?" And I heard someone say this on Instagram, and I think that freedom of speech does not mean freedom from consequence. [Like that was] just crazy. It creates the energy of like... this is why kids are getting lost at the border and why people are screaming at Spanish-speaking people in restaurants in New York City. That energy starts from the top. So when you have the president and celebrities expressing outwardly racist views, and continue to have huge corporations endorse them and promote them, that’s an issue.

Again, my heart just breaks for the cast and the crew—that now don't have that job... But also, I'm so not a fan of hers, and I wasn't then, and I'm not now. And I'm sure she's not a fan of mine, and that's fine.

Who doesn't love Queer Eye, though?

Honey, I bet Roseanne's not living for it. Maybe actually she's bingeing on it right now because she's got more time on her hands, but...

Does that ever make you nervous? The fact that everyone at some point can get labeled "problematic"?

Yeah, I think anyone in entertainment is worried about that. People have said that [in the] comments—that I was being problematic—ever since I started making content on Gay of Thrones five years ago. So that doesn't feel new to me. I think I've always been a threat to gay men who have a lot of repressed, internalized homophobia. I think it's hard for gay men who deal with a lot of shame to see someone living fully, and I think that sometimes my living fully is misinterpreted as putting on a mask or being a stereotype, but I just can't really spend too much of my time taking inventory of people's feelings about me. Because I know my truth, and that's what's important to me at the end of the day. So, I don't really think that we are problematic.

If you could switch jobs with any of the other guys, what would you choose and why?

Probably culture. I would switch to it because you can do the most different stuff. You can do a different moment every week, and I feel like you could be the most creative with it.

Final question, the one on everyone's mind. Will you ever cut your hair?

If my hairline starts to betray me, for sure.