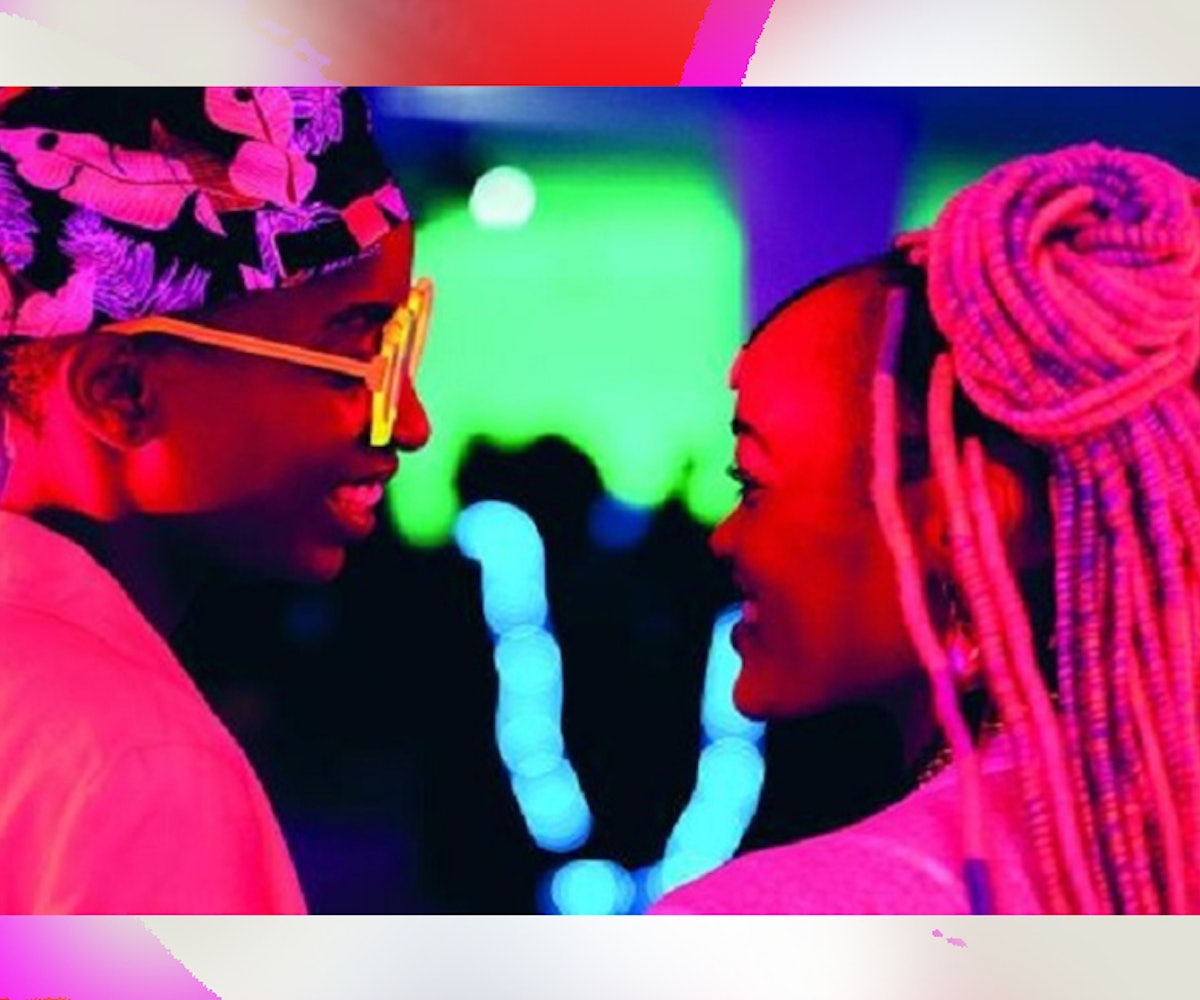 There’s an endless array of feelings that can be communicated in a mere glance. Whether it’s an exasperated look between friends, a comforting gaze from mother to child, or the longing stare of a lover, the very act of looking can be used as an effective shorthand to convey the way people feel about themselves and each other. Kenyan director Wanuri Kahiu has taken that understanding to its logical extent with her sophomore feature film, Rafiki, by crafting a tender lesbian love story that examines the way the act of looking can be both a romantic salve and a weapon used against the queer.

Set in Nairobi, Rafiki follows the budding romance between Kena Mwaura (Samantha Mugatsia) and Ziki Okemi (Sheila Munyiva) as their fathers face off in an upcoming local election. Drawn to each other despite the anti-gay stigma that surrounds them, they carve out a special place for each other in their complicated teen lives, exploring their sexuality and desire within the confines of a protective bubble that eventually bursts as safety becomes a more pressing concern.

Kahiu is one of the co-founders of AFROBUBBLEGUM, a media company that “supports, creates and commissions fun, fierce and frivolous African art,” and that well-defined aesthetic is felt as early as the film’s opening credits. A mix of traditional African patterns and pop art accompanied by a strong musical opening deftly sets the tone for her alternative love story.

The film focuses mainly on Kena, her home life, and her growing inability to hide her attraction to Ziki. Because Kena is originally hesitant to approach her due to their fathers’ political rivalry, it is Ziki who eventually makes the first move to invite Kena out. “I see the way you look at me,” she teases. Kena’s longing gaze is hard to miss, and the way she views Ziki as a fantasy object of desire is reflected in the way Ziki is framed by an aura of light in each of their most romantic interactions. Early in the film, they discuss their hopes and dreams and plans for the future and Ziki encourages Kena to reach beyond the simple life that her family expects of her. Kena’s realization that she is not only capable of more but wants more is cemented when she looks at Ziki, engulfed in the gorgeous hues of Nairobi's setting sun. Ziki is her guiding light, her shining star.

As they continue their romance, the looks increase in frequency and intensity. Their first kiss is tender and sweet; despite their tentativeness, they are able to find moments of true romance. Their first night together is delicate and full of the hesitant touches of lovers who are just learning each others’ bodies. The adoring light of Kena’s affection returns as they regard each other in the morning.

But their community is hostile to same-sex relationships, and as Kena’s gaze becomes harder to hide, so, too, does their relationship. The way she looks at Ziki eventually becomes the very thing that outs her to nosy onlookers. When the town gossip Mama Atim (Muthoni Gathecha) finds them together in the abandoned truck that has become their secret love nest, she calls the cavalry, and a mob of men arrives to punish the girls for transgressing against the community's strict and religious rules about queer love. The girls are savagely beaten and the revelation of their affair is a local scandal. Kena’s ailing mother is incensed; she sees Kena’s relationship as another thing she will be blamed for as a newly single mother. Ziki’s mother is all too willing to blame Kena for being a “corrupting influence.” Her less traditionally feminine presentation is an easy scapegoat for her own daughter’s sexuality. Kena’s mother tries to pray the gay away. Ziki’s parents send her to England.

The dissolution of their relationship would feel too much like the traditional narrative of women being punished for loving each other, but Kaihu wisely leaves us with a coda: Kena hears that Ziki is finally back in town. When she goes to their meeting place, the warm light of adoration returns just as the screen cuts to black. Their story ends not with pain and suffering, but with the promise of a new, happier beginning. Kahiu wields the camera like an interloper, prying into Kena and Ziki’s intimate moments to examine the tenderness and innocence of young love, but also the danger and risk of being openly queer in a society that rejects you. Her Afro-pop aesthetic sets the stage for a story that is different to the ones we know, but still related: These women are vibrant and full of life even as they struggle with their own identities.

What Kahiu does withRafiki is present a queer love story that exists outside the mainstream narratives of gay romance. Young black women in Africa are not at the forefront of queer representation, and by centering them, she reminds us of the intersections that exist for these women and the additional barriers they have to overcome to be with each other. The optimistic possibility of the film’s ending has led to it being banned in her native Kenya, but it’s the very thing that makes the story so novel; the danger exists, but there are ways to move through it and escape the tragedy that is so often prescribed to queer lovers. It is heartening that in the spirit of her film’s protagonists, Kahiu has refused to give up the fight.