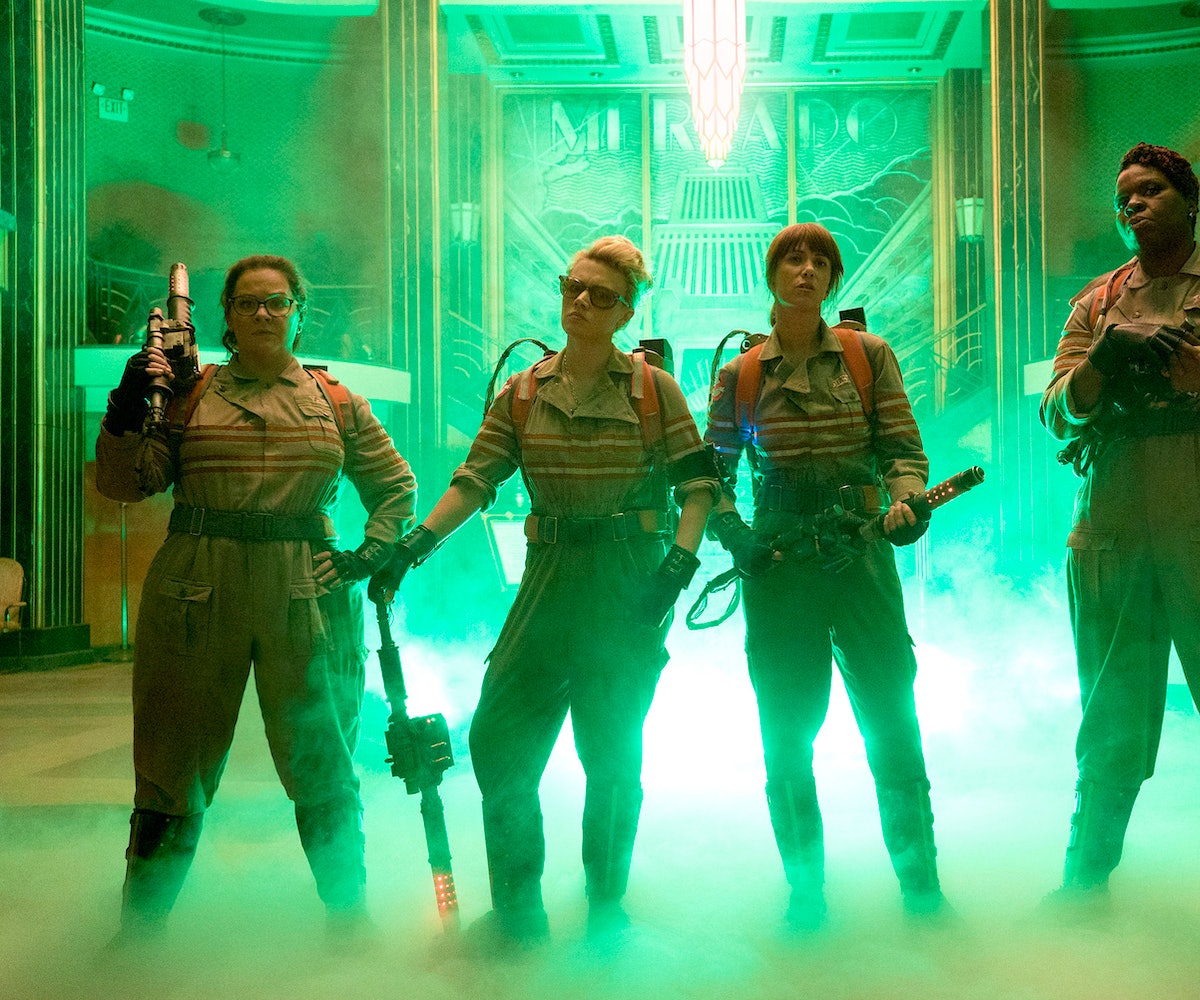 In 2010, Brigid Goode moved to Gettysburg, Pennsylvania, which, as the site of the Civil War’s bloodiest battle, is ground zero for hauntings in the United States. It was there that Goode, who had been a paranormal investigator for 20 years, formed the Gettysburg Ghost Gals, an all-female team of ghost hunters that also includes Jenny Thomas, Tracy Wilson, and Jennifer Spear. Together, the group has written books, traveled across the country giving guided tours and speaking at conferences, and have partaken in countless private investigations into the paranormal.

Calling them real-life ghostbusters was an easy, if not entirely accurate (they don't use proton packs and there's no Ecto-1 in sight), way of describing what they do as is, but when Sony announced they'd be rebooting the franchise with women as the four leads, the parallels became even more prevalent. Goode told us that the filmmakers even used them for research. So naturally, they were super excited to see the movie as soon as it was released last Friday. We called them up soon after to get their thoughts on it. (Spoiler alert: They loved it).

How did you guys get into this field?Jenny Thomas: I started investigating ghosts about five years ago. I had a job working at the Farnsworth House Inn in Gettysburg. There are lots of ghost tours there, and one of the things we’d do were ghost hunts. That’s how I got started. I met Brigid when she actually came out to investigate my house about four years ago.

Brigid Goode: I had an experience at 14 years old. We had been going to this abandoned house, me and two girlfriends. At the time my brother had a boom box. I thought, “Oh, let’s record the noises on this boom box,” since we’d hear these noises. We were young kids. I actually obtained my first EVP (Electronic Voice Phenomenon) at 14 years old on my brother’s boom box. That was around 1984. At the time, we didn’t know there were EVPs. That was the beginning of my paranormal past.

What were your initial impressions when you left the theater?BG: Oh my gosh. What’s our overall quote for the review Jenny?

BG: Boo-ya! Emphasis on the boo! I personally loved it. I wish to god I could have that equipment. I thought the opening scene was terrific. It really grabbed you, when they go into this mansion and the tour guide is trying to spook the people who are going into this mansion. They have a fake candle that falls over onto its side. They’re trying to have spooky effects. People leave, and there’s this glowing device under a piece of furniture. The guy winds up being dragged down to the basement. He winds up there, and there’s a ghost out to get him. It’s really good and scary. It’s a really cool scene. The cast held their own, and they weren’t trying to be Bill Murray or Dan Aykroyd or Harold Ramis. They weren’t trying to be the guys in the original movie. They were being themselves, and it was refreshing and funny. The sound effects were absolutely amazing.

JT: The CGI–oh my gosh. I will never look at mannequins the same way again. They’re creepy, to begin with. After that scene where the mannequin is chasing [Leslie Jones’ character] Patty [Tolan], I was terrified. That was the scariest part for me!

BG: I think we collectively agreed that was our favorite scene in the movie. That was so creepy.

Were you guys able to relate to anything you saw? Was any of it grounded in your reality as ghost hunters?JT: We obviously don’t have any of the proton phasers or anything like that. I think we can relate to the characters being women. I think every woman who watches the movie will be able to relate, and see at least a little bit of herself in at least one of the characters. I personally think my personality is a lot like [Melissa McCarthy’s character] Abby [Yates] and a whole lot like [Kate McKinnon’s character Jillian] Holtzmann. I am the unusual one of the group. I would be the one to lug my equipment as I ate in a restaurant.

In the movie, the ghostbusters face skepticism from the larger world about the paranormal existing. Was that something you could relate to? JT: Of course. We face skepticism every day.

BG: That’s not gender-based. It just has to do with what we do and the paranormal.

JT: The majority of the population does not believe in ghosts. Whether it’s because they’re terrified and they don’t want to think about it, or they just don’t believe in it. I think a lot of people get defensive about it, like, “Prove it, prove it, prove it!” This isn’t an exact science. When we show them weird photographs and weird videos and EVPs, they make up a reason for almost anything that happens in the paranormal. It’s that small percentage of the things you cannot have a reason for that really keep us going.

BG: Personally, I’m very much a skeptic. I truly come at these things with a scientific manner. I was a lab tech for almost 20 years. I worked in hospitals, I ran lab tests. I truly go into this with a skeptic’s view. When we review things, like an Electronic Voice Phenomenon, we analyze them on a spectrogram and look at the decibels to see if they’re in human speaking range. We also look for specific vocal patterns. When human beings speak, they take breaths, and you can see that with an audio software program. When we get an EVP, it’s literally a line with none of those breath breaks.You know you’re getting something because you’ll hear a sentence, or one word or a few words, and there are no breath breaks. At that point, we make sure it fits the criteria and is a possible EVP, which is not a proven science. Nothing is 100 percent.

Why do you think the movie faced a misogynistic backlash?BG: The sexism part of it is people being upset with the fact that it shouldn’t be a remake or a reboot. People didn’t want that done to the original. What I would tell people if they’re looking to judge the movie, is it’s a different movie. It’s a fresh take on a movie that was wonderfully done almost 30 years ago. These women, they’re not trying to be the original ghostbusters. It’s very hysterical. I was very surprised how funny it was. There were some great minds behind the movie. One of my favorite characters had to be Patty. She was hysterical in the movie. I think of myself I’m a cross between Patty and Melissa McCarthy.

Why’s that?BG: She’s scientific, but she’s a wise guy. She’s a little bit condescending. She’s also kind of funny. She’s just an intelligent, scientific person. That’s me in a nutshell. This is based on the first movie, but in no way, shape, or form are they trying to be the original ghostbusters. And we absolutely loved all the different cameos and the respect that was paid in the film to the first Ghostbusters.

JT: I have to say, I loved the bust of Harold Ramis in [Columbia] University. That’s a choice easter egg that’s in there. When I saw that I said, “Oh my god, that’s a bust of Harold Ramis!” I would tell people that the movie is just good fun and entertainment.

JT: Honestly, if Dan Aykroyd didn’t think it was a good movie, I don’t think they would have let the girls have it. The original people had to like it. They’re in the movie, and why would they be in it if they thought it was going to be terrible?

Was there anything in the film that was rooted in reality in terms of how they look? BG: No. I would say a lot of the proton packs and things like that are Hollywood-esque. They respond to EVs though, which is neat. In the beginning when [Kristen Wiig's character Erin] Gilbert goes to Abby, she’s like, “You’ve got to hear this EVP!” They bend over to the machine, and it’s actually a raspberry. And Holtzmann has a rather nasty, hysterical comment about that [laughs]. There were some great things in the movie. I dare someone to go see it and not laugh. That would be a great quote. I don’t want to say I was surprised, but I was a little bit since it was better than I anticipated it would be. Paul Feig did an amazing job with the movie. I’ve seen the returns on numbers, and I’m very happy for them. I’m glad it’s standing on its own.

JT: I want to say I liked the movie so much. I’m going to see it again this week. I have to see it two, possibly three times. I was laughing so hard I missed things. Wednesday after work, you and I are going. My treat, in 3-D!