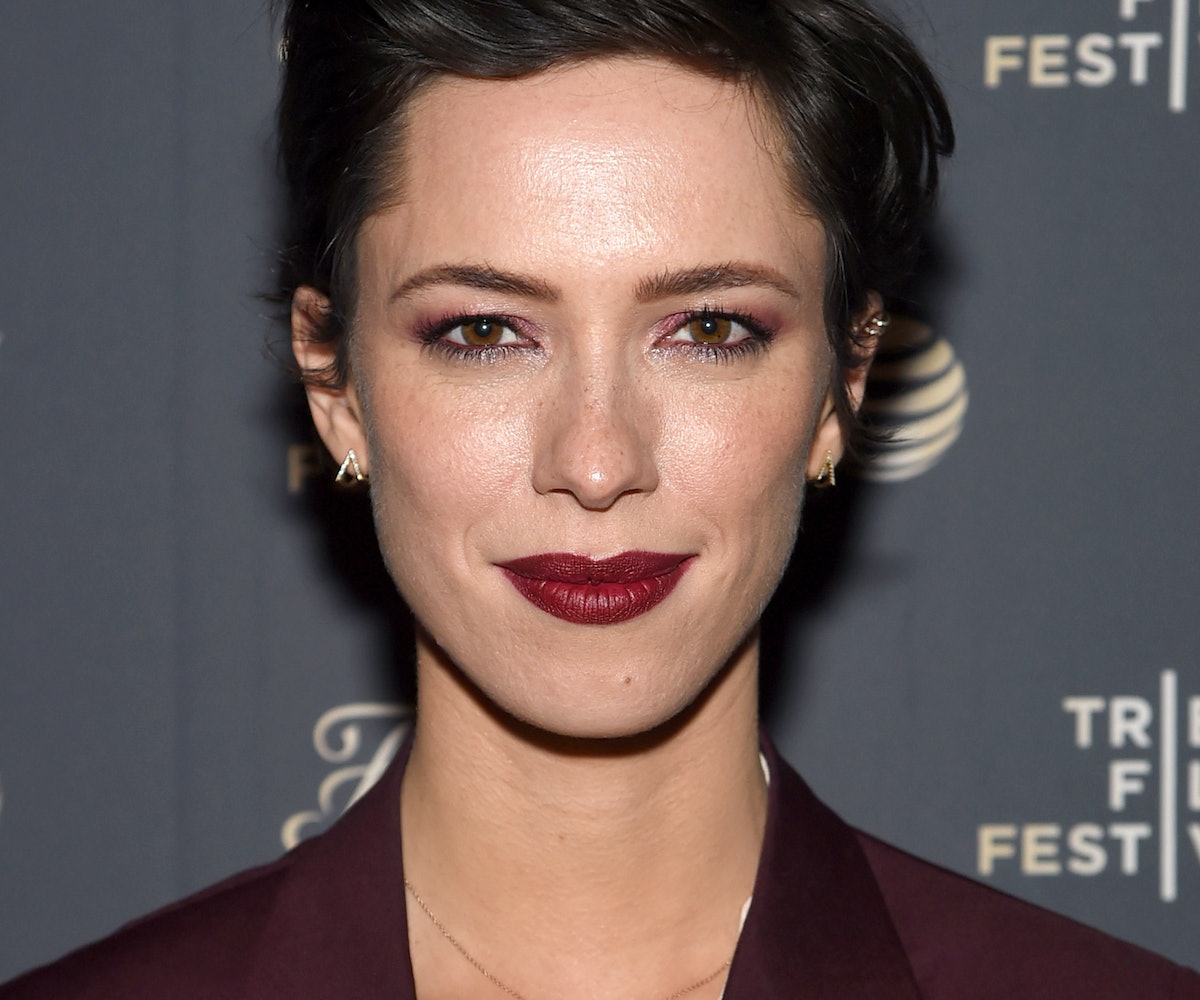 When Rebecca Hall agreed to take on the role of Christine Chubbuck—the Florida news anchor who shot and killed herself on live television in 1974, and whose suicide video has become the holy grail of macabre internet ephemera—she had a very singular goal in mind. “I wanted to get rid of the idea that she's a monster who appears on internet lists of the ten most shocking people of all time,” Hall told us when we sat down with her in Toronto recently. “She was a person, and the film celebrates that.”

The film is Antonio Campos’ Christine, a haunting glimpse into the final days of Chubbuck’s life, as she slowly succumbs to a toxic maelstrom of hostile forces both internal and external; a newsroom where women are second-class citizens, a tumultuous home life, and withering depression.

It was Hall’s most challenging role to date, and one that’s earned the 34-year-old British actress the first real Oscar buzz of her impressive career. Here, she discusses the challenges of shooting the film’s devastating final act, Hollywood’s lack of female anti-heroes, and what she learned about herself while playing one of history's most elusive figures.

Christine premiered at Sundance, and you’ve been forced to sit on it for pretty much the whole year. Is it a relief that people will finally get to see it and talk about it?

Honestly, I've been kind of desperate to start talking about it. It's rough when you make something that you're really proud of and think is really good and was made on a shoestring as a tiny independent film. It doesn't have that kind of muscle behind it to put a trailer in every home.

Do you feel that after making this film you have a better understanding of who Christine was?

No. I feel like I have an understanding of who I instinctively think she might've been. I don't know otherwise. The creation of the character came from the script and it came from my imagination. It didn't come from looking at the sources and trying to replicate them.

That’s often the case when you're playing a real-life person, but this was very different, I imagine.

Yeah and I could've spoken to some people. The filmmakers, Craig spoke to friends and coworkers, but he didn’t speak to the family, and that was a deliberate choice. The sources on this are very complicated because they went through a personal tragedy and I would never want them to ask anyone to relive that and bring up all of that stuff that they personally went through. We don't address them or what they went through in the film. For better or worse, she made the tragedy a public one by putting it into the public consciousness, so she left a lot of people with a lot of questions to grapple with and in many ways, it's art's responsibility to grapple with it. Art is the forum for analysis, debate, all this stuff to work out, what it is that makes us human, and that's why artistic freedom or artistic license is an important thing. When you ask me, "Do I know who Christine was?" no, I've got no idea. If I was writing an essay, I have a perspective on it.

Did you have that responsibility to show that she was someone outside of the act that came to define her?

Absolutely. That's the only reason to make the film. It's not to talk about the act. We know that. We're not hiding it; we're not trying to hide it for dramatic effect. We're telling everyone this is what happened. You hear about this story, and I think you fall into two camps. You have a response which is shock, horror, "What a monster, what a scary thing to do," or you have a response of curiosity and sympathy. We want to get rid of the idea that she's a monster that appears on internet lists of the ten most shocking people of all time. She was a person, and the film celebrates that.

This is the second film about Christine this year. [The other is Kate Plays Christine.] Is there something specifically vital about today that makes it worth examining?

Yes. For as much as I keep talking about it, you couldn't fictionalize this entirely because what she did is completely unique and it is significant, and it does have so many far-reaching ramifications. It touches on so many things. She was going through a breakdown of sorts, and you could argue that America was too. It's the golden age of journalism, it's Watergate; it's also moving toward "if it bleeds, it leads," this idea that fear can manipulate and control the public. Well, that's not gone away. There's a lot of that going on right now. I think that quality, that sort of frenetic energy is relevant today. The news is relevant today—the feminist angle, the feminist perspective, that she was someone who had so much integrity, but she couldn't play by the rules of what it is to be a soft woman.

The film depicts the newsroom as a harsh environment for women, something that holds true today.

Absolutely, it's not changed. It was a completely not meritocratic environment. She's not rewarded for her hard work. I will say, the thing I think first and foremost about this film is its humanity because it's not so black and white. It doesn't give any explanations, it doesn't say, "This thing happened to her in her childhood, which makes her this," and it doesn't say, "Everyone around her was so horrible to her that it made her do this." What it does do is show someone who is desperately trying to be normal all the time. Sometimes she's good at it and sometimes she's bad at it. Regardless, there's a community around her that does actually accept her. Even when she's being cuckoo, they love her, accept her, and they want to help her. The tragedy of the film, yes, it's the end, but the real tragedy is that she doesn't see that everyone is actually accepting her. We're talking about a big spectrum of mental health issues, but on a more general level, I think we can all relate and struggle with that idea that we're not accepted.

Why do you think people have become so obsessed with unearthing the footage of her final act?

Everything's available, and if she had done it now, we would've all seen it. I think it's a real blessing for the family that they have destroyed it because you don't want to live with that out there.

Have you heard from the family at all?

No. Both Craig and Antonio made a conscious decision not to contact their family when they set out to make a film. He spoke to friends and coworkers, but the question of source material in this issue is complicated. No one wants to go to a family that's suffering from personals tragedy and say, "Help me relive it." Their relationship to it is complicated because it's trauma. It was trauma for them, but the act she did was public. We've stayed away from that, and we've made a piece of art because that's what we do. We've reached out to her brother and said, "We'd really love you to come and see the film in a safe environment with no pressure and no one looking at you," and he's declined. Frankly, I get it, I understand. I'd want to keep distance too. I wouldn't want anything to do with it. I feel sad for him because part of me wants to be able to tell him that this is a genuine piece of filmmaking. It's heartfelt, sympathetic, and it's not pointing fingers. There's no accusation, there's no suggestion that anyone could have saved her. It's a heartfelt grapple with trying to understand a very complicated person.

What was the mood like on set when it came to shooting that final scene?

It's an indication that we were doing our job well that we got to that point. I think to an extent everyone making this film, really cared about her. We all got to this point of really caring about her. We didn't want what was going to happen to happen. Nobody wanted that day to come on set.

How do you not take something like that home with you?

I think it's indulgent to let it drift into your after-work life. I don't think it's necessary and I think it can be damaging. With that said, I try really hard to let it go when I go home, but it's hard. It's really hard. I think if you want to be good as an actor, it's about truth. I think great acting is invisible. Even when it's extreme characters, it doesn't call attention to itself. It's internal and it's quiet, and you don't really notice it happening as an audience member. To do that, you've got to swallow it.

I imagine that with every role, you learn something about yourself. What did you learn about yourself playing Christine? Did you identify with her desperate need to fit in?

I kind of relate to that in a weird way because I think it's hard to have a lot of integrity as an actor. There's so much froth and frilliness that surrounds it. You sound like such a noble when you're like, "I've got integrity as an actor" because everyone's like, "Oh what, you make movies and you swoon around at parties." Honestly, I got into this because I want to make films like Christine, because I feel that an actor's duty is to take people who are really hard to understand and relate to and somehow make them compassionate because that's a lesson of tolerance. If you can contribute to that a little bit, then you can contribute to tolerance, and that generally helps everyone. As a lady, you don't really get that opportunity. I'm so happy that, finally, the world is letting women be big heroes and really lead films. Hallelujah, well done. Now we've got to pave the way for them to be anti-heroes too. The conversation that women need strong parts, what does that mean? Are you just going to come in and kick ass? It means nothing. You’re still sort of battling with being strong and kick ass, but you've still got to be pretty and likable and nice. Can’t you a human that's occasionally horrendous, terrible, and makes bad choices?

That’s something men get to do all the time.

Someone like De Niro, a lot of my heroes, they've made a career out of it. They are always playing these big characters that do horrible things and yet you love them. Christine, she's not likable, but she is lovable. That's the thing, and that's the trick. That's where it all is.