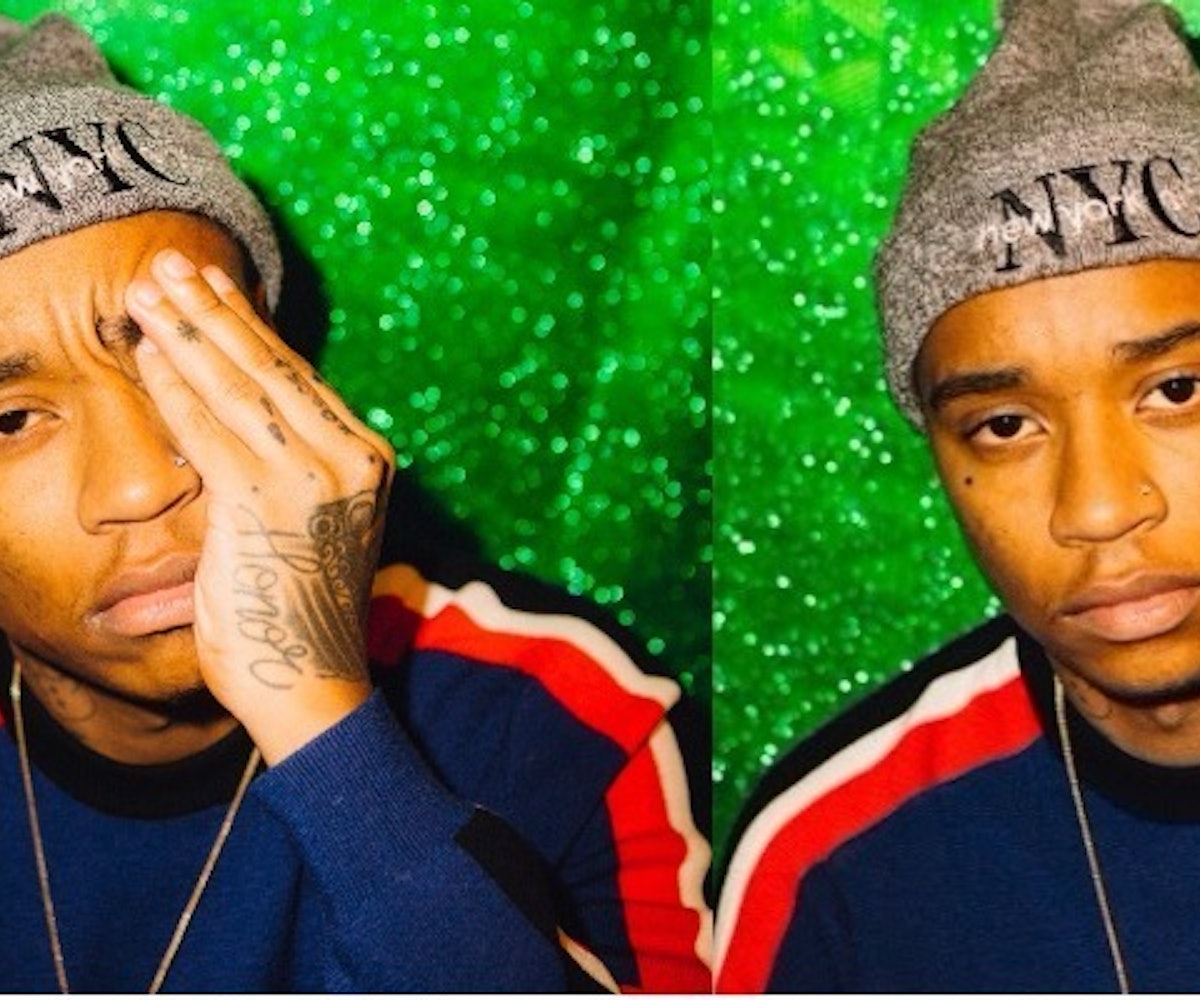 Alex Anyaegbunam wants to get more into astrology. The 24-year-old, better known by his stage name Rejjie Snow, tells me this while we discuss the correlation between our birthdays—he was born on June 27, 1993, two years (minus one day!) before me. This makes him a Cancer—one of the most empathetic, emotive, and generous signs of the entire zodiac. "I only know about being a Cancer in bits," he tells me. "Like, I know that we're emotional and stuff."

"Well, do you consider yourself to be hard on the inside and soft on the outside?" I probed.

"Yeah, that’s why, my whole life, I’ve had like this thing, just trying to get out of my masculinity."

And in his highly anticipated forthcoming release, Dear Annie, he does just that. The new record, which dives into some of the rapper's experiences with love, loss, and death, proves that he's not just a man made for the stage—he's a man made for the soul. "Sometimes it's like therapy, sometimes it's like... I don't know," he says of his experience in putting the album together. "Dudes don't really talk about their emotions."

But the journey there wasn't easy. It's one thing to be an emotional being, but it's another to be an emotional being who is both black and male. "There's so much trauma in [our] communities. Even my friends, it's something that's, like, a thing. Before I was making music and cutting my emotions and not really having any substance to my shit, but now, it's like I can talk about my life, and it resonates to some degree with people, and that's really hard to do. But when you figure it out, it's amazing. Not that I completely figured anything out, but now, it's, like, different sounds and different feelings help me get everything out. I haven't lost too many people, but the last two years, I've lost enough to talk about it in some kind of way," he says of the album's content. "And that's enough for me."

"And in terms of the love aspect," he adds. "I just love love. I'm a romantic. Everything about it, it's great; it's free. It's the one thing I'll always resonate with."

Get to know the man behind the moniker in our interview, below.

The last time you spoke to us, you mentioned that this album wasn't going to be very personal. But after hearing some of it, I'm not sure that I totally believe you.

No, of course. I made like two albums before this album, and it was like going through the motions within myself, so I feel like, for me, the last couple of months, everything was clicking into place. So it made sense to write about the things I was talking about. And getting over that speed bump, I was just able to make things, and it made sense for me and for other people. When you share something, especially something personal, you just kinda get lost in it.

She's a character. She represents all these relationships I've had and just girls all kinda rolled up into one entity for this story. Annie represents the highs and lows of everything. She almost plays Lucifer but in, like, a sweet way.

It's all about meeting that one person, and mine is Lewis Ofman. He produced like eight tracks, and he was just like my guy, my right-hand man, through the whole process. He was there to take all my ideas and talents and not make me feel insecure about what I was talking about. That was the key to everything.

Can you talk about the decision to release Dear Annie in parts?

I felt like 20 songs is quite a lot for people, so it was a new idea. The label suggested it, but I, ultimately, think it was a really clever and strategic thing to do.The way music is consumed these days, it's just very quick, like fast food type shit. But for me, it's about the music being good enough to do that, so I feel like the way the album is, it's one of those kinds of albums that people go back and listen to more than once. I was like, "Cool, It doesn't matter if I release four songs before." Plus, it gives people the time to know the songs before the tour.

How did you feel about fans’ responses to the first part of the record? Did you feel any sort of pressure from yourself or others when it came to putting this record together?

Absolutely, a constant pressure, like in my head. You feel it, too?

Yeah, I deal with anxiety. It's tiresome.

There's always that pressure, and I don't take life for granted, so, like, I feel this mortality more lately. It pushes me to try to do everything. Even interviews, I'm trying to lay everything out there because I'm not like...

Not trying to hold yourself back?

Yeah, I feel really sure of myself these days, I feel really fearless with my shit, so I think with the release coming up—this is my first album, and the next one is already in the works—I want to make everything count, I want people to really know I care. But sometimes it's too much, you know? I'm just trying to figure out the connection between me and my friends, and it's them sharing the journey with me. It's half about them and half about me, and, for me, to release an album now, after four years of anticipation, like, I got so much love for that. People are already fickle with musicians, so I'm lucky to have people who really fuck with me and ride out with me, and I appreciate it.

What do you want people who have never heard of you to know about you?

I'm just a human and that's all, nothing else. I'm just trying to express myself in the best way possible.

The idea for my next album, called Uncle Thomas, is about a black guy in a white world. It came to me when I was sleeping, and that's the same with everything. I don't really think about things too much because there's not really time to think, you know? But I try to make sense from the position I’m in and how I see the world.

What is your position in the world?

I don't know, it's tough. And where I'm from, I don't feel left out as much now, or feel like an outsider.

For me, the feeling is just fuel to be creative, and that's cool. It sucks, it's like you don't wanna be that angry black guy because everything's against you. It's a constant battle, and I feel like everyone has their own struggles.

Do you feel like you're living up to your purpose now?

Slowly, I feel like I'm doing what I'm supposed to do, and I'm really grateful I can do that now and there's a platform. It's really hard for a lot of people. And that's why I'm like, "Fuck it."

Dear Annie is out February 16.