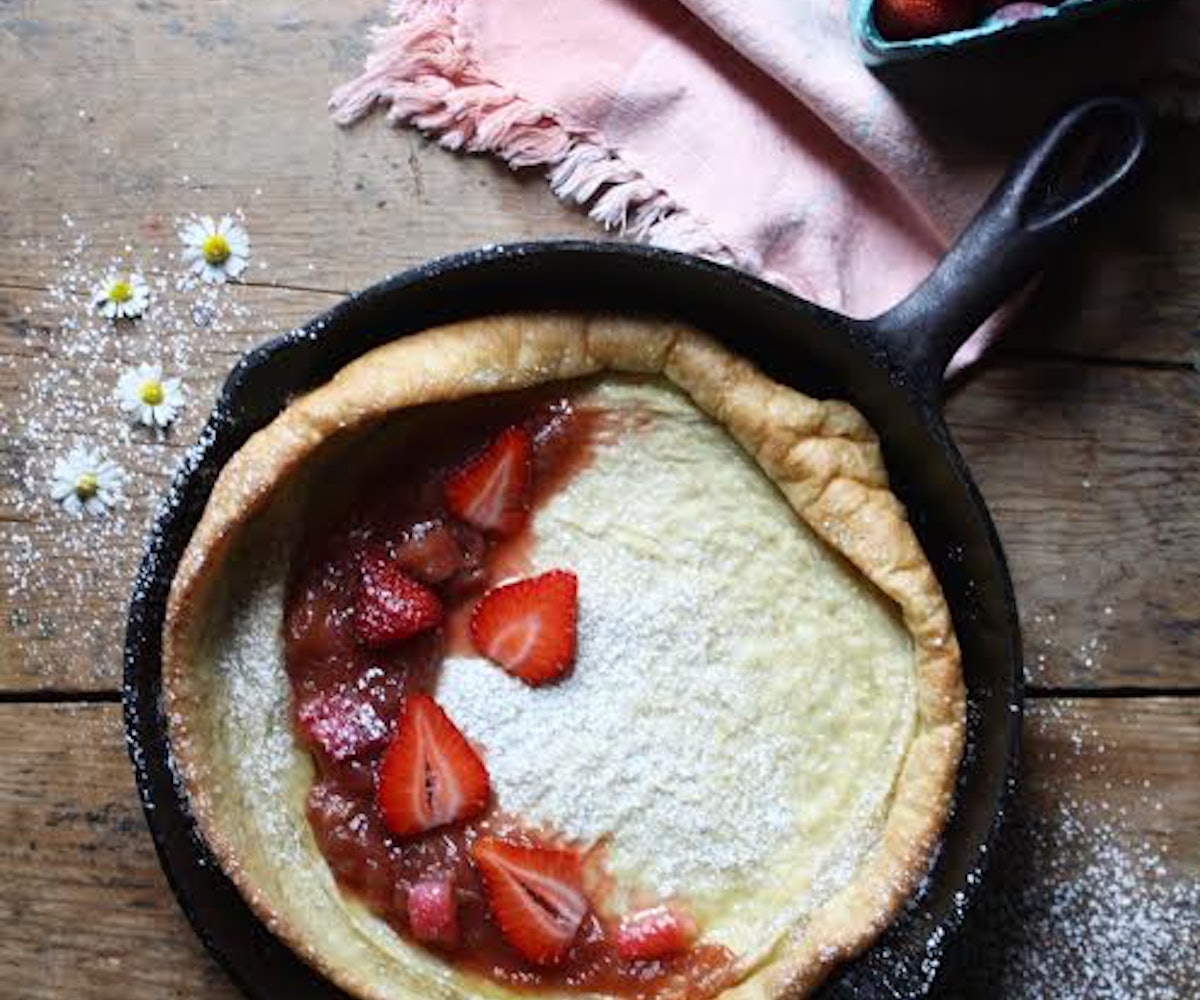 That pink celery you’ve seen at the market isn’t celery at all. Not to be confused with the stalky vegetable and dipped into hummus, rhubarb is a seasonal vegetable that sprouts in the beginning of spring. A prelude to strawberry season, this tart vegetable is better suited with sweeter ingredients, and most often can be found in a pie filling.

The bitter bite of rhubarb finds a tasteful partner in citrus and berries. Hence, their constant pairing, like you and your BFF every day in high school chemistry lab (#tb).

This culinary coupling is a case of opposites attracting. The sour spike of rhubarb doesn’t quite corrupt the purity of the fruit, and fruit’s natural sweetness doesn’t quite tame the tart of rhubarb. Instead, their differences make for a harmonious duet like Danny Zuko and Sandy Olsson singing “You’re The One That I Want” in Grease.

While you could just combine strawberries and rhubarb in a crater of pie dough, I will leave that recipe to your grandmother. There are other reasons to haul a bundle of rhubarb back to your kitchen this spring. Here are four:

When chopping rhubarb, make sure to discard of the leaves. While the stalks are edible, the leaves pack poison for human consumption. Consider rhubarb the blowfish of the garden.

For the Rhubarb Compote

For the Raspberry Glaze

Pre-heat the oven to 350 degrees F. In a saucepan over medium-high heat, stir the rhubarb, orange juice, and sugar together and bring to a boil, about 2 to 3 minutes. Reduce heat to low and let simmer until rhubarb is broken up, about 10 minutes. Compote yields around 1 1/2 cups. Transfer to a bowl and set aside to let cool.

Spread the sheet of crescent dough onto a lightly flowered surface. In a small bowl, mix together the cinnamon, brown sugar, and nutmeg. Spread the mixture over the dough. Spread half of the rhubarb compote, about ¾ cup, atop the cinnamon mixture. Roll up the dough, carefully, lengthwise. Cut into individual rolls and set on a baking sheet. Bake for 12 to 15 minutes, or until golden brown and fluffy.

Meanwhile, prepare the raspberry glaze. Mash the washed raspberries in a bowl with a fork or mortar and pestle. Transfer the mashed raspberries to a sieve and fit over a small bowl. Squeeze the juice out of the berries using the back of a wooden spoon, making sure no seeds get into the bowl. Combine the lemon juice and powdered sugar into the raspberry juice, mix. Drizzle raspberry glaze over the rolls and serve warm!

Call this Barbie’s dream breakfast. Pink vegetables poached in pink syrup can delight a dreary morning. Pour it over plain, tart yogurt for a spectrum of flavor.

For the Poached Rhubarb

For the Yogurt Bowl

1 serving of your favorite yogurt

In a medium saucepan over low heat, combine water and stir in sugar until it’s dissolved. Add whole star anise and tea bags, let simmer and steep for 5 to 7 minutes. Add the chopped rhubarb into the tea water and let simmer over low heat until soft, about 5 minutes.

Meanwhile, prepare your bowl with yogurt and granola. Once the rhubarb has been poached, remove the rhubarb with a slotted spoon and serve it atop granola with a little of the tea syrup.

For the Rhubarb Compote

For the Dutch Pancake

Pre-heat oven to 400 degrees F. In a saucepan over medium-high heat, stir the rhubarb, orange juice, and sugar together and bring to a boil, about 2 to 3 minutes. Reduce heat to low and let simmer until rhubarb is broken up, about 10 minutes. Compote yields around 1 1/2 cups. Transfer to a bowl and set aside to let cool.

Place a cast iron or oven-safe skillet into the oven to heat up. In a mixing bowl, combine flour, milk, sugar, cinnamon, lemon zest, vanilla extract, and 3 eggs. Whisk together until incorporated. Remove the cast iron skillet from the oven with oven mitts. Melt butter in the skillet making sure to cover all sides. Pour in batter and place back in the oven. Bake for 15 to 18 minutes, until the sides have puffed up and are golden brown. Let cool and serve with compote. Garnish with sliced strawberries.

Summer’s batches of tomatoes are about to invade the markets. And that’s great. But in the meantime, as the weather warms, dip your chips into a different pool of salsa.

Fill a small saucepan with 2 inches of water and stir in sugar until dissolved. Bring syrup to a boil over medium-high heat. Add chopped rhubarb and let boil for 1 minute. Remove with a slotted spoon and dice.

Add rhubarb, strawberries, and shallots to a serving bowl. In an a mixing bowl, combine apple cider vinegar, olive oil, honey, lime juice, cinnamon, ginger, and salt. Stir together and pour over the strawberry, rhubarb, shallot mixture. Toss and serve.