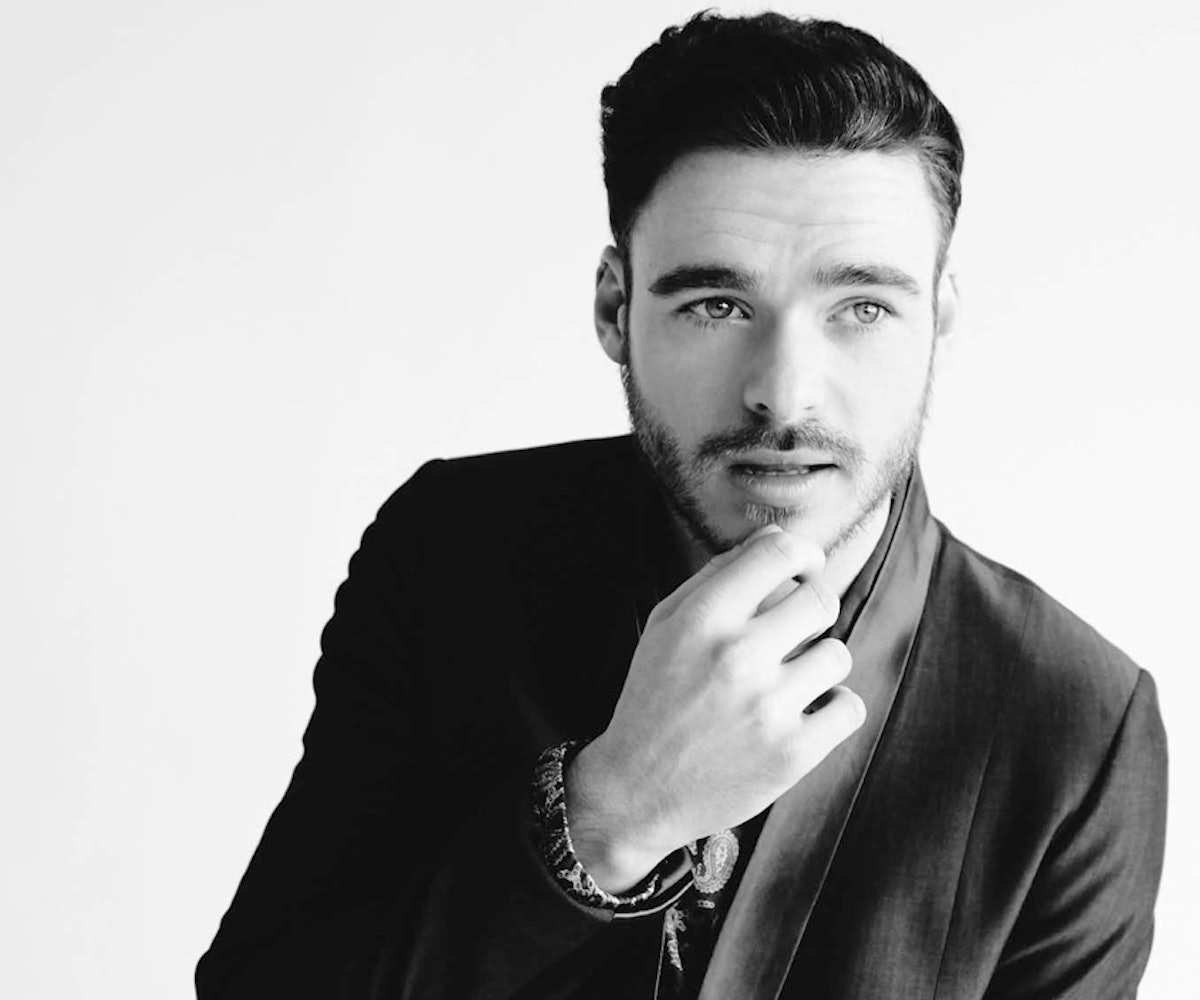 When Richard Madden screen tested for the role of Prince Charming in Disney’s live action retelling of Cinderella, panic was his overriding emotion. Not because he was about to give life to every little girl’s dream guy, or because he was auditioning in front of stage-and-screen royalty, director Kenneth Branagh. Instead, it was his pants. “I was like, Okay, alright, this is what we’re doing? Skintight white pants?” says Madden, laughing at the memory. “You’re thinking, I don’t know how I’m going to live this down. What do I look like on camera? How tight are these pants?”

Extremely tight, it turns out. Madden, who booked the part of Prince Charming, soon found himself at London’s Pinewood studios, riding alabaster horses and wooing Cinderella herself, played by newcomer Lily James, with an irresistible combination of regal self-confidence, puppy-dog sweetness, and a pair of cerulean eyes.

Today, in the buzzing Tribeca eatery Benvenuto Cafe, right next door to his hotel, the 28-year-old London-based actor isn’t dressed like a pristine prince. Speaking past a careful amount of stubble, and wearing a fitted navy peacoat, tight black jeans, and scuffed-up white Chucks, he looks like your average downtown New Yorker, with just two major differences: Madden, a native of Elderslie, the mile-wide village outside of Glasgow, Scotland, speaks in a textured brogue. Also, a small congregation of men with cameras are waiting for him to finish his grilled chicken sandwich and head outside. He’s a long way—seven kingdoms in fact—from Winterfell, where Madden held court for three seasons as Robb Stark, King of the North, on HBO’s fantasy saga, Game of Thrones.

Madden’s blossoming fame—something he’s still adjusting to—is what happens when the show you booked at 22 years old becomes a global phenomenon, and you just happen to be playing an incorruptible good guy in a world where moral ambiguity reigns supreme. “Being in other countries was when I realized Games of Thrones was so big, because in my head I just shot a little TV show in Ireland,” Madden says. “You’re walking around in Paris or Rome and strangers want to take a selfie with you, and you’re like, ‘Oh shit, this is kind of big.’”

But if Madden gained fame for bringing Robb Stark to life, he gained infamy for how the character went out. They’re the two words that still send shockwaves down the spine of every Game of Thrones fan, and the two words that Madden, whether he likes it or not, will be associated with for the rest of his career: Red. Wedding. In case you haven’t watched the show, I won’t spoil it, but Madden, who calls the five days of shooting the scene “disturbing,” recently had to re-watch it to record audio commentary, along with the actress who played his mother in the show (and also appears in the scene), Michelle Fairley. “I was in New York, the director was in London, and she was in LA. We all video linked to each other, and just kind of sobbed our way through the end of it. I’ve not listened to it back, but I’m probably quite embarrassing.”

The first time Richard Madden’s parents had to watch their son suffer an onscreen death was on the British miniseries Birdsong, where his character was shot and killed. “It’s fucking heartbreaking,” he says, dropping just one in a stockpile of f-bombs, “because I don’t think my mum and dad–particularly my mum–can ever separate it as if it’s not me. It’s always me.” Madden joined a youth theater group at an early age to battle a nasty bout of shyness, a decision that led to him being cast in the BBC comedy, Barmy Aunt Boomerang. Being on television so young, Madden says, “fucked with my head,” but prepared him for the attention to come. A stint in drama school eventually led him to London’s theater scene, where he won the title role in Romeo and Juliet at the famed Globe Theater. But Madden’s desire to return in front of a camera meant starving for a year while he networked and waited for casting agents and directors to pay attention. Already a huge fan of The Wire, Madden knew he’d found a game changing part when HBO eventually came calling.

Madden, who recently wrapped Bastille Day, a spy thriller opposite Idris Elba (“we’re a really odd couple”), is currently in between projects and looking to buy a flat in London (“it’s stupid expensive”). And, for the moment, he’s watching his weight. “When I’m not working, I’m either getting thin and fit to do a job, or, if I don’t have to be working out every day, I can get fat and drink beer.” Right now, he’s getting set for a global press tour of Cinderella alongside the film’s other stars, Cate Blanchett and Helena Bonham Carter—an obligation he definitely considers work. “I hate all the red carpet stuff,” he says with a sigh of resignation. “It’s weird, because it’s part of what’s expected of you now. I’m an actor. That’s my job. But actually no, this has got to be part of my profession. You just suck it up and try and make it as painless as possible.”

Like squeezing into a pair of tight white pants.