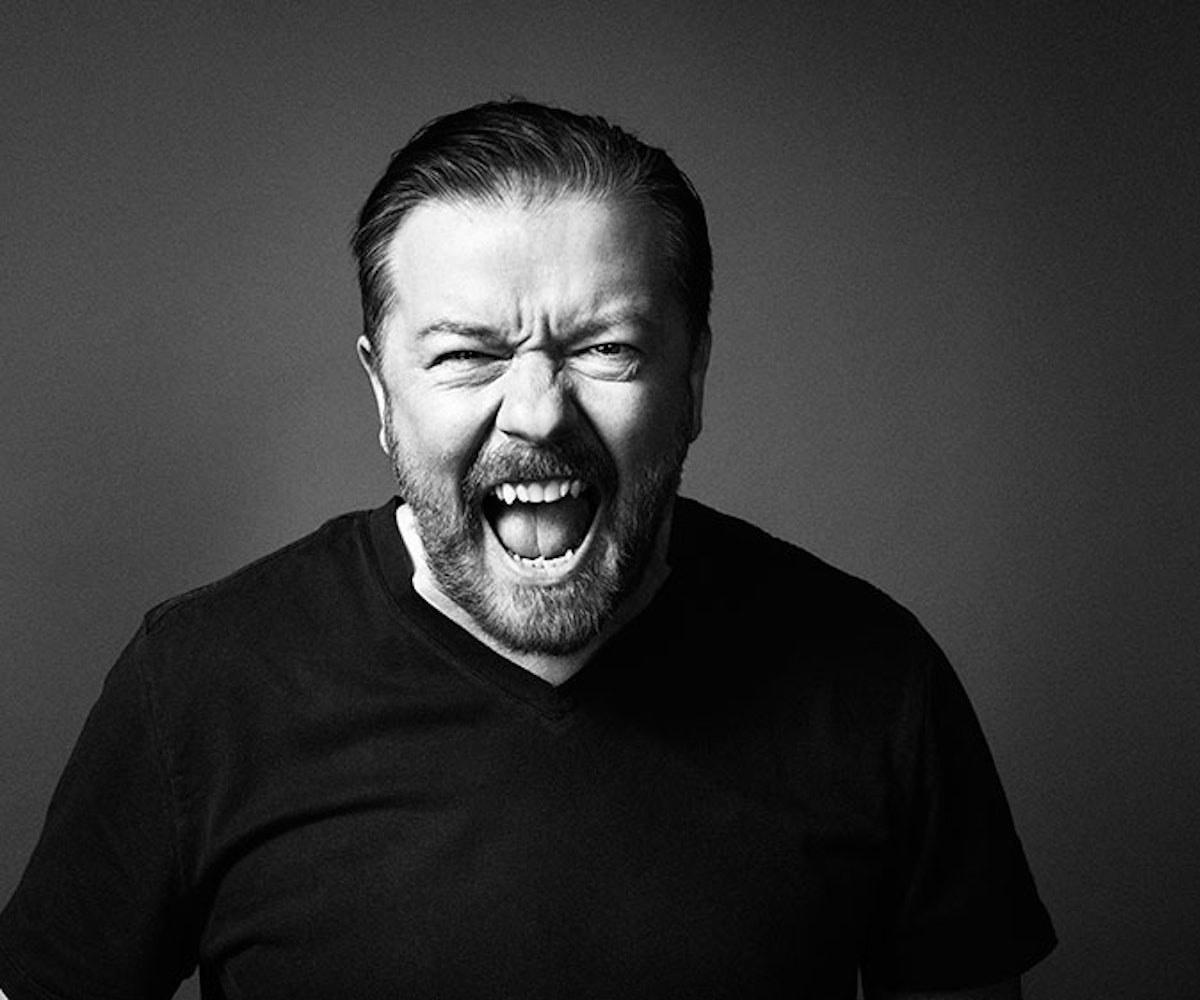 The trademark laughter—a hyena with its front paw trapped in a revolving door—makes its way out of the room, down the stairs, and into the damp streets of southeast London on this gray winter’s day, and announces to anyone passing by that Ricky Gervais is in the building. “If there is an hour in the day when I am not laughing,” he will say later—laughing—“I resent it.”

The funniest, the most successful, and surely the most polarizing comedian of his generation, Gervais, 53, makes for a terrific conversationalist. Every opinion is a voluble one, but he is a more gentle, and warmer, proposition in the flesh than his on-screen persona might suggest. At the risk of ruining his reputation, he’s a nice guy.

He is also very busy. Throughout 2015, there will be little avoiding the man. First, Netflix will screen the final installment of his TV show Derek, and then there are two movies in the pipeline: Special Correspondents, a remake of a French comedy that he is writing and directing—and also starring in, alongside Eric Bana—and Life on the Road, in which he resurrects his most famous creation, The Office’s David Brent. “I have the biology of a toddler,” he explains. “I have to run around and do lots and lots of things all the time.”

And then, for no discernible reason, he’s laughing again.

How many baths do you take per week?

[Frowns] Well, OK, as you are a journalist, I am going to answer this question seriously, though I’m guessing you wouldn’t ask the same to Kofi Annan. You are presumably referring to me filming myself in the bath a lot, then uploading the clips onto Twitter, right? I have two baths a day, one when I get up, another after I’ve worked out every night. Sometimes I’ll have a third if I’m bored. It’s a bit decadent, I suppose, and a waste of water and energy, but I do spend a long time in them, and I do emerge clean.

Derek, your comedy about a man, possibly with learning difficulties, who works in a home for the elderly, is coming to an end. It has had a fair amount of criticism, including accusations of being overly sentimental. Has this made you defensive?

I’ve been accused of being a bit combative in interviews about this, yes, and I suppose I should ignore everything and just let the show speak for itself, but I wanted to give it a fair chance. Hearing somebody else’s opinion is all noise, and when it’s a negative opinion, it’s like reading a toilet wall. OK, some people don’t like it, but it’s been nominated for an Emmy and a Golden Globe, and that’s nice. And on Twitter, it’s received the most emotional reaction of anything I’ve ever done.

Many of the characters on Derek are essentially patiently awaiting an inevitable death. Does death scare you?

We’re all hurtling toward it, aren’t we? You have your eyes tested, and they go down a few percent every year; your knees ache from running; a hangover gets worse, and lasts longer. It’s not death that scares me so much as knowing I’m going to die. The worst thing anyone could ever say to me is: “You’ve got three months to live.” That’s worse than a bad review! [Laughs] If we all died in our sleep, I would literally fear nothing in this world.

Judging by the many outtakes you post online and on your twitter feed, you give a convincing suggestion of enjoying life enormously. Do you?

I do, I do! I always remember how lucky I am every day, and at the end of every day I make sure that I was nice to everyone. I ask, “Have I stressed anyone out? Is everyone cool with me?” I wouldn’t be able to sleep

at night if I thought I had upset someone.

This might surprise those who consider you an abrasive, often merciless comedian, quick to controversy. Just ask the star-studded audiences at the Golden Globes, which you hosted from 2010 to 2012 with what some have called "cruel glee."

Oh, people say I’ve sometimes offended them, but what have I really offended? Their feelings? I know that no one likes to be the butt of the joke, but I don’t make jokes about things people can’t help. So, OK, I made jokes about Charlie Sheen getting drunk, Robert Downey Jr. going to jail, Mel Gibson ranting. I didn’t joke about their race, did I? I wish people hadn’t gotten upset by what I said, but I still justify the jokes because I’m 50, and I know what I’m doing; everything has been considered.

You became successful somewhat late in life, The Office arriving onto our screens when you were 37. Were you a hugely frustrated wannabe comedian before that?

Not really, no. I was just living my life. When I was five, I wanted to run the local sweetshop, then I wanted to be a marine biologist. I studied philosophy at university, then I became an entertainments officer at a university, then I started working for a radio station. And then, all of a sudden, I was on television. Three years later, I won a BAFTA for The Office. I asked my girlfriend, Jane, afterwards, “Why didn’t I do this before?” And she said, “Because you wouldn’t have been any good.” And she was right. I lived my life, I observed it, then I wrote about it as honestly as I could.

Comedians have demons—that's the rule. You seem to conceal yours better than most.

I don’t think I have any, not really. There are things I can’t get out of my head, of course—like animal cruelty. I have an image in my head right now of an ill-treated elephant that I saw a few days ago. The feeling I have is of wanting to kill someone, or else cry my eyes out. I cannot stand any kind of cruelty. Otherwise? Well, if I find a lump, it’s terminal cancer. That’s always the first thing I think: “I’m going to die!” But I don’t really have bad thoughts or suffer from depression. I think I’m pretty happy. I have fun. You know, my working day is from 11 a.m. to 4 p.m., between baths. I’m in front of the fire with my cat on my lap and a glass of wine by six o’clock. What do I have to complain about?

For someone with such a high profile, you don't appear particularly vain. The personal trainer didn't last long, did he?

That had nothing to do with Hollywood’s influence, actually. I started making an effort after one Christmas. I was 48, and had eaten 11 sausages. I thought I was going to have a heart attack, so I decided I had to do something. I didn’t want diabetes, and I didn’t want to die of a heart attack like my uncle or granddad. So I worked out and lost weight. I’ve put a little back on now, but that’s fine. I would never lose weight, or put on weight, for a film role. Partly out of principle, but frankly I can’t be bothered. I’m not Daniel Day-Lewis, am I? My laziness has often been mistaken for integrity.

Have you had any work done?

[Laughs] Somebody said to me on Twitter recently: “You’re worth £80 million, and you haven’t had your teeth fixed.” I said: “When you are this rich, your butler chews your food for you.”

You're about to resurrect David Brent in a new movie. You must be feeling the weight of expectation.

No, because I really don’t care. Who’s going to judge me? The whole world? So what! They can’t affect me. Look, the more famous you get, the more people hate you, and the more people love you. Either way, you can’t let

it affect you. Too many people are affected by what people think. Imagine if Churchill were around today, running England, and somebody tweeted him: “Oh, I wouldn’t take on Hitler if I were you—just leave it.” Would he? For better or worse, you’ve got to follow your own instinct. I’m not doing stunts over Niagara Falls; I can’t get killed. All I’m doing is making a film. And if a few people don’t like it, so what?

Does anybody vet your work before you unleash it to the public?

Sometimes I will show my girlfriend what I’ve written. I’ll ask, “What do you think of this?” If she says, “Oh Jesus, please don’t say that in public,” then I know it’s good.