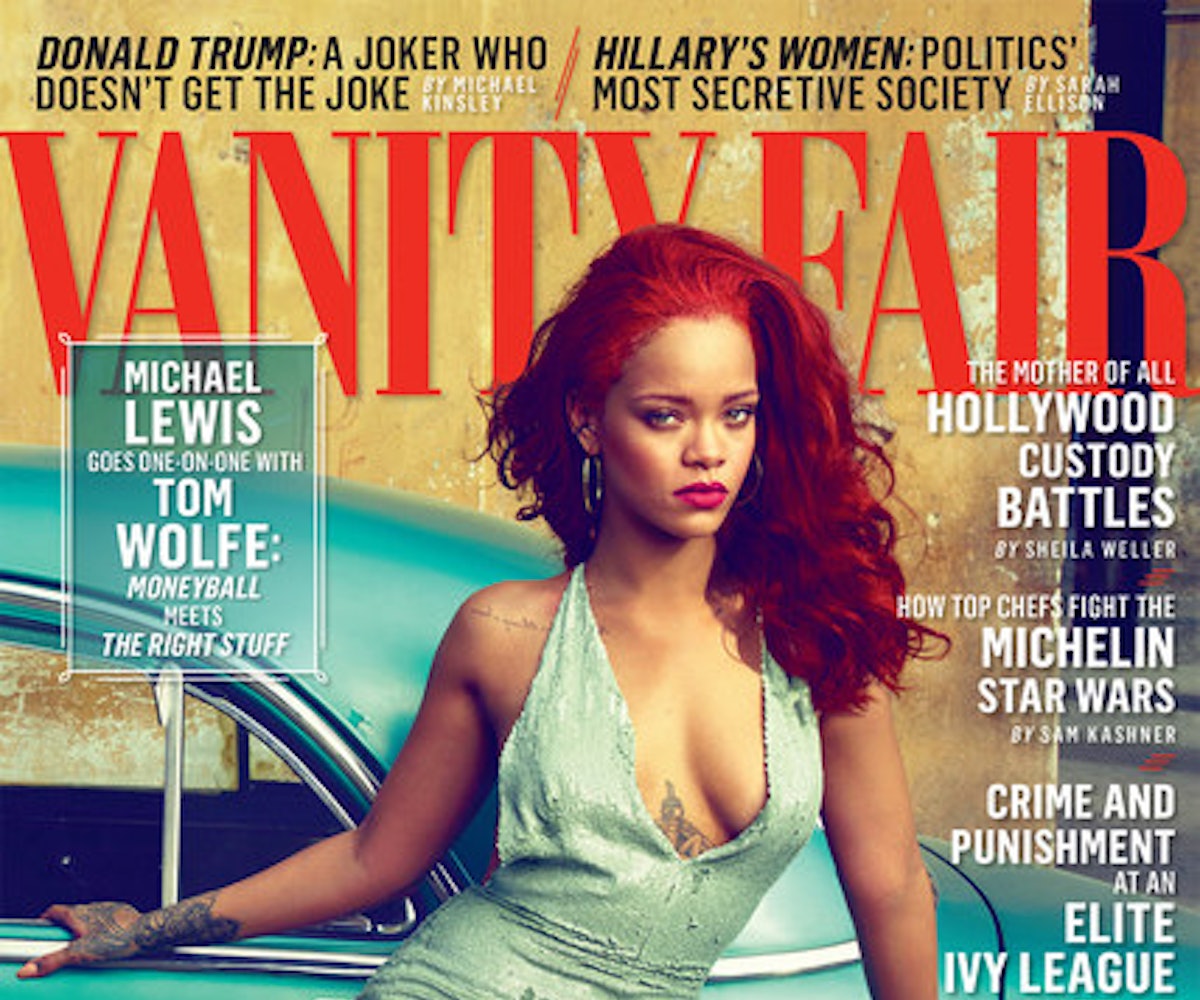 Rihanna has been the shining face of a slew of legendary magazine covers lately from The FADER's 100th issue to NME's first free issue, so it's no surprise that Vanity Fair rang her line for their coveted November issue. Shot by Annie Leibovitz in Cuba, the cover story aims to break down how Rihanna is in control of her personal life and career, but not her public image. She's labeled as a "club-hopping temptress and poster child for victims of domestic abuse," but she admits that all the fame and attention freaks her out. "I honestly think how much fun it would be to live my reputation. People have this image of how wild and crazy I am, and I’m not everything they think of me," said Rihanna. Granted, it's an exclusive interview with RiRi, so her destructive relationship with Chris Brown was bound to be a talking point, but somehow Rachel Dolezal got thrown into the conversation, as well. Check any social media platform, and Rihanna is being put on blast for allegedly praising Dolezal as a hero.

“I think she was a bit of a hero, because she kind of flipped on society a little bit,” said Rihanna. “Is it such a horrible thing that she pretended to be black? Black is a great thing, and I think she legit changed people’s perspective a bit and woke people up.” The controversial comment arose during a "late-night conversation" with writer Lisa Robinson, so either Rihanna wasn't thinking straight because she was tired, or her quote was taken out of context... Or maybe she simply doesn't give a damn. After all, this is Rihanna we're talking about. She's entitled to her own opinion, and she'll say and do as she pleases. We can't help but wonder if @badgalriri's bad-girl image is a façade, but we'll let her be the judge of that.

NEXT UP
It Girl
Madison Bailey Is Embracing The "Elegance" of Being in Her Mid-20s
Culture
13 Valentine’s Day Gifts Under $100
Fashion
Kali Uchis Stars In H&M Studio’s Glamorous New Spring Campaign
Beauty
“Birthday Makeup” Is Sparking A Battle of The Sexes On TikTok
Style + Culture, delivered straight to your inbox.