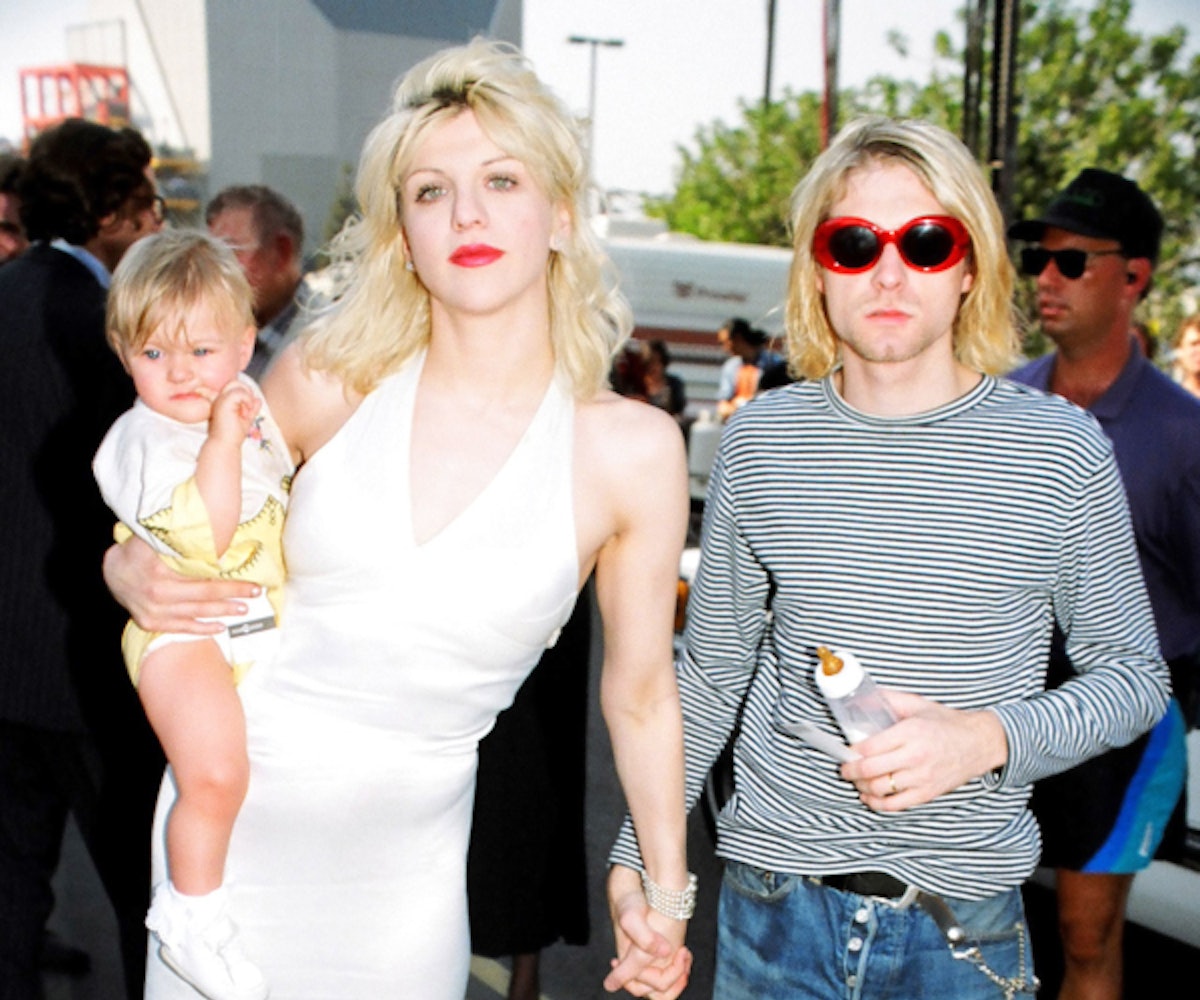 With festival season in full swing, and every band we love on the road, we’re in full Penny Lane mode right now. Since we have to, you know, work and therefore can’t just hop on someone’s tour bus and lose ourselves to the rock and roll lifestyle, we thought we’d come up with a creative, Almost Famous approximation via our favorite way to live vicariously through others: the TV. So, we’ve compiled a list of some of the best rock documentaries of all time to tide us over between shows this summer because, as the most famous fictional groupie of all time once said, “If you ever get lonely, just go to the record store and visit your friends”—but in our case, “record store” is our couch and “your friends” are mostly dead people we’ve never met. Close enough.

[RELATED:  What Bella Hadid Believes Propelled Her To Stardom]

If we're being 100 percent honest, Soaked In Bleach is the more compelling documentary Cobain documentary due to its salacious nature; however, Montage of Heck is an affecting portrait of one of music's most iconic frontmen as told in large part by his own journals. You can stream it on HBONow.

This film chronicles the Stones' 1969 tour and culminates in a disastrous and tragic free show at which a fan was killed by a member of the Hells Angels as the band looked on in horror. You can stream Gimme Shelter on Amazon for $3.99.

Amy is the highest grossing British documentary of all time, and it offers an incredibly intimate look at the troubled talent's life. Most disturbing about the film is its portrayal of how the greed induced by Amy's fame caused those who should have been trying to help her to instead exploit her. You can stream Amy for free with an Amazon Prime membership.

This 1968 concert film includes performances by the Jimi Hendrix Experience, Janis Joplin, Jefferson Airplane, The Who and more. Technically, it's not available to stream, but you can watch most of it here.

Don't Look Back has consistently been named one of the best rock and roll documentaries of all time. It follows Bob Dylan on his tour of England in 1965. You can stream it for $3.99 on Amazon.

What's cooler than an epic rock band performing at an ancient Roman amphitheatre in Pompeii? Adding to the eeriness of the film is that there's no audience, an approach that influenced many concert films that came after it. You can watch Live at Pompeii on YouTube here

This 2007 film chronicles the 'rise and fall' of iconic post-punk band Joy Division. You can rent it for $2.99 on Amazon.

This film explores the origin and evolution of the hip hop DJ and features heavy hitters of the genre such as the Beastie Boys' Mix Master Mike. You can rent Scratch on Amazon for $3.99.

This epic show took place at the Santa Monica Civic Auditorium in 1964 and free tickets were given to local high school students, so you can just imagine the hysteria that ensued. Legend has it that James Brown's performance was so good that Mick Jagger had to be talked into getting on stage after him. You can watch several of the most notable performances on YouTube.

Critic Leonard Maltin called Stop Making Sense, a concert film featuring the Talking Heads, "one of the greatest rock movies ever made." You can watch it for free with an Amazon Prime membership.

Beyonce: Life Is But A Dream

Elvis: That's The Way It Is

This film documents Elvis Presley's Summer Festival in Vegas in 1970. Several other iconic celebrities make an appearance, including Sammy Davis Jr. and Cary Grant. You can rent it on Amazon for $2.99.

One music critic's quote best describes this Radiohead film: "Gee's film focuses on the absurdity of being an important rock band in the current musical landscape—the shallow marketing of the band, the endless stream of redundant interviews, the blinding photo shoots and awkward television appearances." You can watch it on Amazon by subscribing to a free trial of something called Qello Concerts.

The Song Remains The Same

Filming of The Song Remains the Same took place at a series of Led Zeppelin shows at Madison Square Garden in 1973. You can rent it on Amazon for $3.99.

Awesome: I Shot That!

In 2004, the Beastie Boys gave 50 video cameras to audience members at a sold-out Madison Square Garden show, and this film is the result. You can watch it on YouTube.

This film, which Prince created to promote an album of the same name which was not performing well in the U.S., was not a success at the time of its release; however, a New York Times review explained exactly why it's worth watching: "It... plays like science fiction: a visit to the Prince planet, where life is strange indeed. And madly, viscerally exciting, peopled by red-hot, inexhaustible Princelings whose onstage excesses become the perfect backdrop for the star's own antics." Unfortunately, this one is impossible to stream, but you can find some clips on YouTube. You can also purchase the film—which is certain to be a collector's item—for a nominal fee from Amazon UK (it's not available for sale in the U.S.).

This 1997 includes interviews with 80 hip-hop and rap artists, including Dr. Dre, Chuck D, The Fugees and more. You can rent it on Amazon for $3.99.

This film chronicles the love-hate relationship between The Dandy Warhols and The Brian Jonestown Massacre, and it won the Documentary Grand Jury Prize in 2004. You can rent it on Amazon for $2.99.

What's Happening! The Beatles In The U.S.A.

This 1964 film chronicles The Beatles' first visit to America. You can watch the full documentary on YouTube.

This film, which follows several background singers, won an Academy Award in 2014. You can stream it on Amazon for $3.99.

Shut Up And Play The Hits

If you weren't quite sure why the return of LCD Soundsystem was such a big deal this year, watch Shut Up and Play The Hits, which documents the band's last show back in 2011. You can rent it on Amazon for $3.99.

The Decline Of Western Civilization

This cult-favorite film documents the punk scene in Los Angeles in 1979 and 1980. In 1981 the LAPD demanded that the film not be shown in LA, which gives you a sense of what you're in for if you decide to watch it. If you're interested, The Decline of Western Civilization Part II chronicles the heavy metal scene in LA in the mid to late 1980s. You can rent them both on Amazon for $3.99.

Ziggy Stardust And The Spiders From Mars

This is the last show Bowie ever played before retiring his Ziggy Stardust persona. You can watch it on YouTube.

This film follows (arguably, peak) Madonna on her 1990 Blonde Ambition World Tour. It famously features a scene in which Warren Beatty calls Madonna out for her inability to do anything off camera. You can watch it on Amazon for $3.99.

Lil Wayne tried to block distribution of this documentary, so you know it must be good. You can watch it here.

This film documents a block party in Brooklyn hosted by Dave Chappelle and featuring The Fugees, Kanye West, Mos Def and more. You can watch it on Amazon for $3.99.

NEXT UP
Life
The Marilyn Monroe Biopic Director Says ‘Blonde' Will “Offend Everyone”
Life
‘Inbetween Girl’ Star Emma Galbraith Is Coming-Of-Age In Her Own Way
Fashion
Behind The Fashion And Beauty Of Gregg Araki’s Nowhere, 25 Years Later
Life
All Hail The Maximalist Hairstyles Of Everything Everywhere All At Once