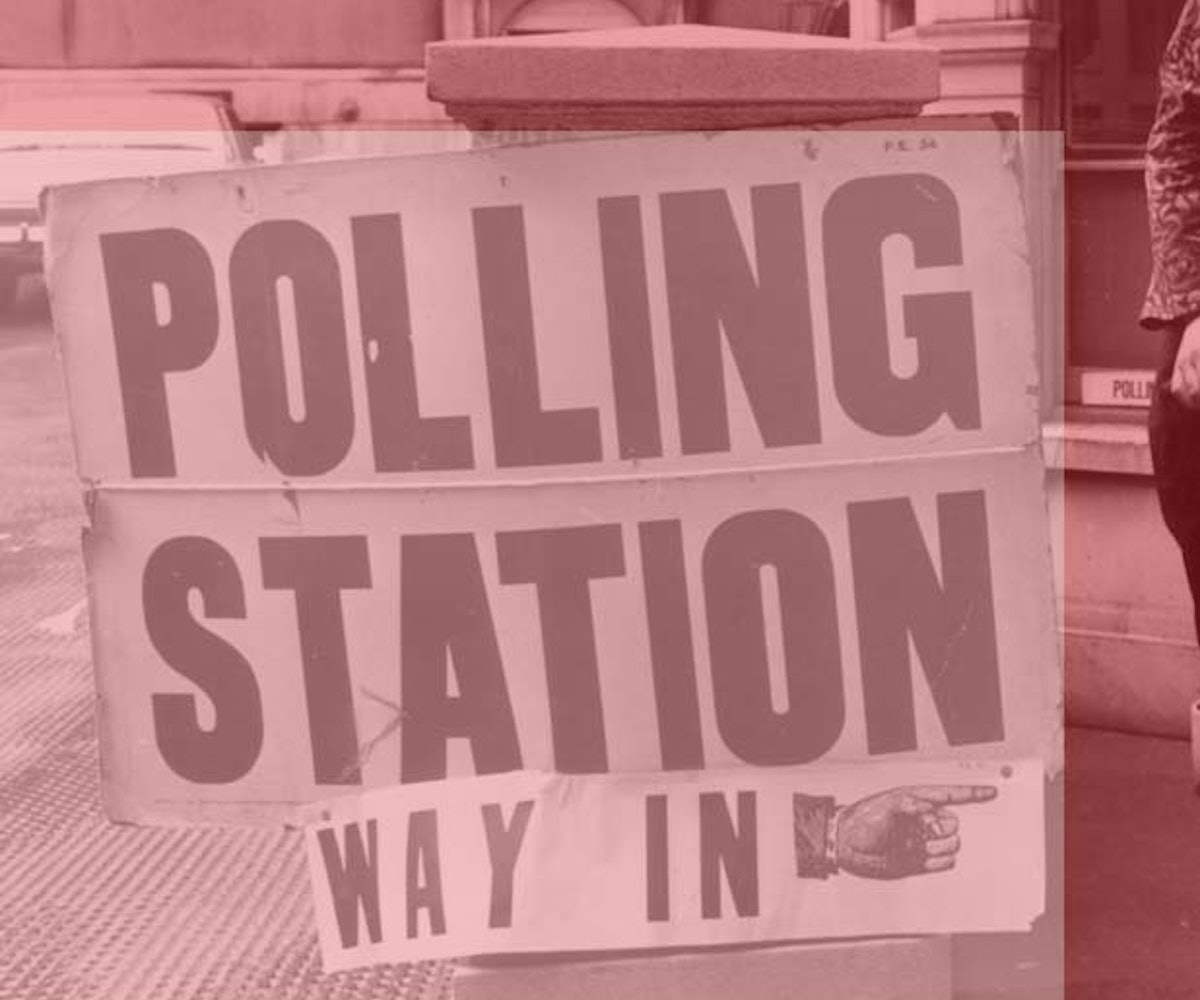 With the country in full-blown election mode, in a race that has seemingly spawned more tight-knit party unity but also divisiveness (and arguably, hateful rhetoric) than in any of recent memory, and with all-important issues on the line from tax reform to women's health, it's more crucial than ever to exercise our right to vote. According to the Center for American Progress, there are currently 95 million millennials in the United States, comprising about 40 percent of the eligible vote.

Our generation has clear political influence but has been dragged historically by poor turnout at the polls. Labeled "social media activists," we are plagued by our willingness to lend our voice to issues on Twitter and Instagram, but not to ballots. About 21 percent of millennials voted in 2014. It can be easy to become discouraged with distrust in the system (

Arizona's recent gaffe is no exception

) but it's also been proven that when millennials participate en masse, real change happens.

The current presidential race has ignited a passion in the under-35 crowd in a way not seen in previous elections. Bernie Sanders alluded to this recently during a campaign stop in Illinois, suggesting that his campaign is most successful when millennials turn out to vote. It is no small number to scoff at, 40 percent, and with such sway in the hands of our generation, a generation that is the most educated and diverse in American history, it's critical to realize that

, we can make a difference.

Helping to raise awareness to the issues that affect millennials is Rock the Vote, a nonprofit started in 1990 aimed at driving youth to the polls. This year

to help give a voice and face to the issues that affect us today. No pomposity from debates, no bashing from mudslinging ads, no tiptoeing around issues: just stories from individuals on what matters to them in this presidential race. Check out six Millenial Nation faces below, like Jackeline, who unabashedly calls out the lack of diversity representation in our government, and Jeffery, who points out broken immigration laws, saying, "I’m fine making people uncomfortable."

when you can vote

, and check out more from

to hear other stories about what people truly care about when it comes to the issues.

“Having mostly men make decisions for me about the issues I care about doesn’t make sense. A man can support paid family leave or equal pay, but he’ll never understand a woman’s perspective on needing it. It’s important to have male politicians as allies, but I think having more female politicians would represent women in a totally different way. It becomes a personal issue as well as a political one.

Younger people feel pandered to when candidates try too hard. Trying to find that middle ground in terms of messaging and reaching voters seems really challenging. As soon as something seems specifically targeted to young people, it’s easy to think, ‘They’re pandering to me and I don’t want to be pandered to.’

“My mom was born here. My dad wasn’t. He’s from Mexico. They both bust their asses. It’s a different lifestyle.

There’s a lot of oppression that comes with broken immigration laws. There are a lot of injustices. We are going to look back on this and say, ‘Yo what was going on? Why did we let this happen?’ It’s a form of marginalization. I’m calling out Democrats and Republicans on this. Immigration is used as an issue to get politicians votes. It needs to be changed. For sure.

I’m fine making people uncomfortable. People have been comfortable in their own homes and their own communities, and they’ve been ignoring what should be national issues. We can’t become comfortable with a policed state or these discriminatory institutions. We need to ask ourselves if there are injustices going on.”

“I have a background in computer science, and I worry a lot about the technological aspects of governments coming in. People aren’t aware of how much of an Internet impact they’re making just by going about their regular lives.

We’re in this fear of terrorism, whether it’s from the media, or the government, or wherever, but politicians use that to their advantage. There continue to be more bills with more surveillance, taking more of our privileges and freedoms away. Once you let the government sign that off, it’s hard to reverse it. But surveillance gets porked into budget bills and other laws, so nobody argues because nobody is paying attention.

Older generations think ‘my tax dollars are going to this, and you’re not paying for it.’ But they’re going off their personal experience when trying to relate to us. They were able to go out into the world at 18 years old, get a job, and be good. We can’t do that.

They think, ‘You’re 18. Get out of my house.’ And the reality is, I can’t. I don’t have work experience, I can’t get a job because I don’t have work experience. They don’t want anyone without a college degree, so I have to go to college. If I got to college, I need my parents to help me pay because if I take out loans, I can’t fault from them. If I fault from them, it doesn’t go away… it’s just this circle of being trapped, and I need support.”

“We don’t see enough women of any race or ethnicity, sexuality, in Congress, or higher up in our government. We certainly don’t see enough people of color up there, and we see fewer queer people.

Young people are very much more diverse in gender identity, sexuality, race, ethnicity… and I think I represent a chunk of that… I am a low-income, queer woman of color.

In terms of making sure that my voice is heard, that’s why I say that one vote is important. Voting IS important because I can use my voice whereas other people may not have access to the voting station due to low economic status. I am better suited in terms of what I do have and the privileges I do have to be able to have my voice heard.

I always say this—if you’re trying to change something, you have to work both within the system and outside of it. If you don’t like anybody running, I understand that, but you need to vote for someone who is going to represent for the greater people, for those who are most vulnerable. We’re not going to do that by not voting.”

“I am double majoring in Chemical Engineering and Spanish, and I’m in my field because I kind of want to go into psychedelic pharmaceuticals.

There can be a lot of benefits compared to conventional drug therapies. In the case of marijuana, from the research that I’ve seen, there is no reason why it’s a Schedule 1 drug, or why it’s even on the Schedule to begin with.

It’s impossible to overdose on marijuana, there are no horrendous negative side effects to its use. There’s no reason other than political bias as to why it’s still where it is right now.

For quite a few people in my generation, they don’t make the connection between voting and their everyday lives. People say things like, ‘I don’t want to vote. It’s dirty, I don’t like politics.’

From my perspective, politics is everything. It’s like oxygen. You can’t live your life without coming into contact with things affected by our political system, especially in a democracy. In order to get people to be more active, they have to understand the connection. The water we drink, the air we breathe, our roads—that’s all politics.”

“Both my parents are from Mexico. My Dad came here when he was 16 years old. He came with his father to work, and my mom came later on.

I feel like immigrants have a disadvantage, and so do we as children of immigrants. We grew up in a different kind of household. It’s hard doing even things like homework. My parents couldn’t help me, they didn’t really understand. Same thing with teacher conferences, it was really difficult. I was six or seven years old, and I couldn’t really translate as well as a natural translator. I would have anxiety. Everything was more difficult.

My parents see this as an amazing privilege to be here. Maybe another family doesn’t get it, but my dad is really grateful for everything. When he got his residency a couple of weeks ago, it moved him to tears. He said he’s been waiting for this since he was 18 years old. I was really happy. Some people don’t see all that.”

NEXT UP
Culture
6 Shows To Binge Once You've Finished 'The White Lotus'
Entertainment
Meet Andreas Metaxa, The Man Behind The Miami Jet-Setting Memes Of Supersnake
Culture
Phoebe Dynevor Will Not Return for Bridgerton Season 3
Culture
11 Must-Read February 2023 Books
Style + Culture, delivered straight to your inbox.