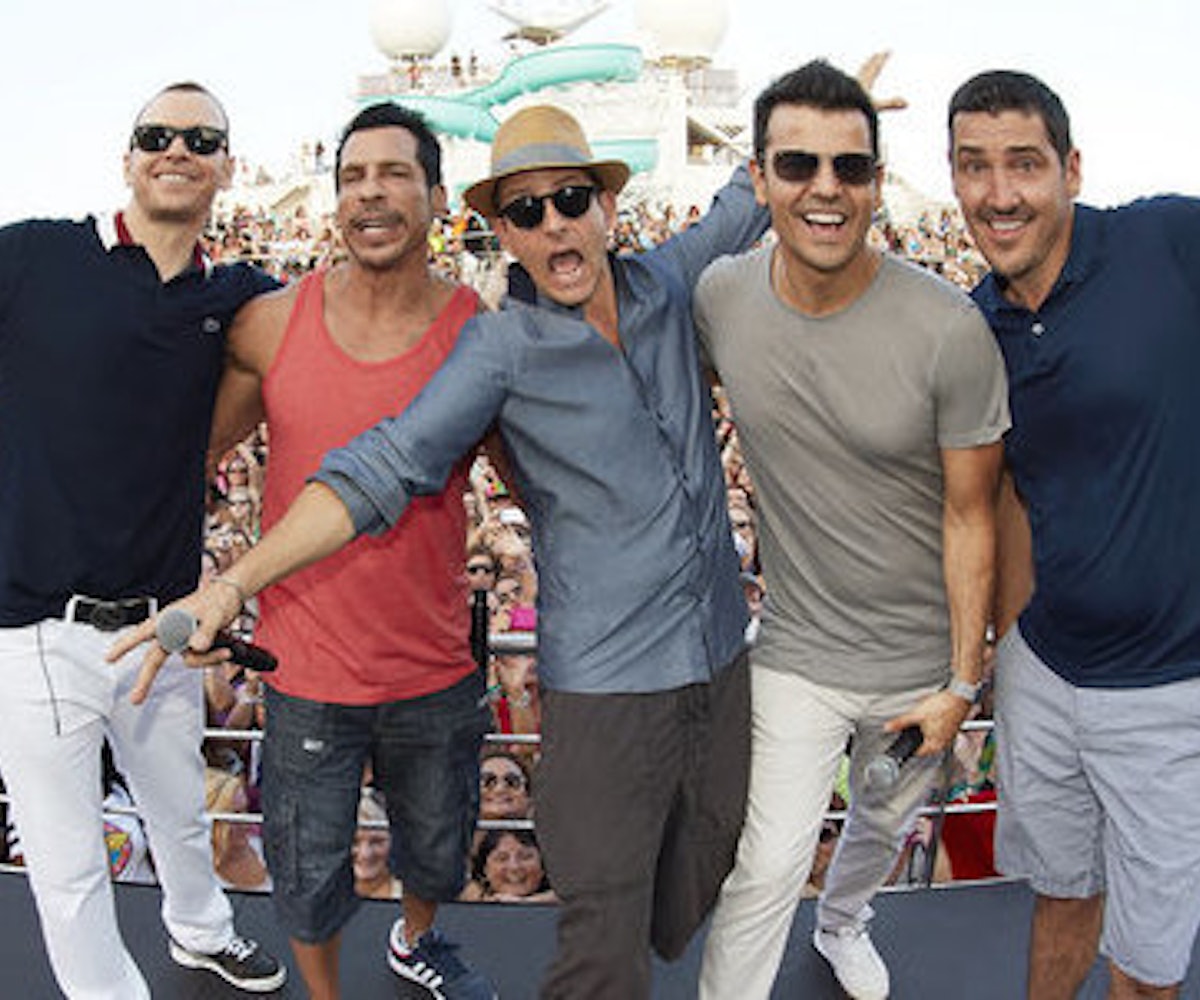 Millennials are pretty jaded when it comes to teen idols; probably this is because the ones we grew up with had a tendency to do things like pee into mop buckets. Compared to this, the boy bands of earlier generations were squeaky clean—just look at The New Kids on the Block. Comprised of Donnie Wahlberg, Danny Wood, Joey McIntyre, and brothers Jordan and Jonathan Knight, the group rose to fame in the late '80s as a band of wholesome, fresh-faced teen heartthrobs. Though the band's initial success gave way in the mid-'90s to a new generation of male heartthrobs (aka spiky-haired Mickey Mousers in monochromatic fits), eventually they had a second life after taking advantage of the cherished nostalgia circuit, participating in staples like the Delaware State Fair and fan cruises—the latter of which forms the basis of their reality show, Rock This Boat.

Though the show seems to have gone on indefinite hiatus after two seasons (the 2018 iteration of the cruise is still a go, despite there being no indication of a third season of the show), it's still a perennial rewatch for me. Following seven groups of die-hard fans as they board a cruise ship to the Caribbean in order to party for four days with the New Kids (though, some fans have other, shady motivations, like a trio of scummy Scotsmen eager to use the cruise to hit on women), Rock This Boat is just as bizarre as you’d imagine it to be.

At its base, all reality television is exploitative, but Rock This Boat stretches this idea to an extreme level. From the shots of screeching women asking this group of middle-aged men to take off their shirts to the hellish loop of stale New Kids hits from the '80, most people will recognize this as a show explicitly filmed and edited to bolster the New Kids’ egos. After all, there's something to be said about being able to quantify your value via pure net worth, but does money really make up for the hit your ego will inevitably take as you age? Even if you don't necessarily need the cash, how does a payday even compare with the allure of reliving your glory days?

Once you reach this eye roll-inducing realization though, the show becomes an equally fascinating and entertaining study in the way reality television can be aided and abetted by a group of all-too-willing participants. And while this is the formula most reality television operates upon, it's illuminated on Rock This Boat in a way that forces you to pause and consider if these people's motivations are (at least partially) sponsored by a production company.

Possibly the part of the show that's most difficult to believe is that the people on the cruise are not simply actors hired to fulfill some archetype of the "crazed fan." Whether it's watching a woman ask her husband on national television for a “free pass” to fuck Wahlberg (yikes), or cringing as a duo (who spends months painstakingly researching the Carnival employee outfits) tries to hijack a room service cart to just meet these men for a second, it is really hard to fathom that anyone would go to these lengths for members of a boy band that peaked almost 30 years ago.

And yet, as a former fangirl extraordinaire, I have a real appreciation for the pure joy many of the Rock This Boat women experience on this cruise, and understand that fandom is not always rational. Yet, with Rock This Boat, we're presented with a portrait of five washed-up pop stars who somehow still maintain upwards of 3,000 die-hard fans who are willing to spend $2,000 on a cruise in the hope of getting a mere glimpse of the New Kids. And if that doesn't seem slightly suspicious, then I'm not sure what does.

If anything, Rock This Boat feels like a low-key conspiracy meant to bolster the vanity of aging men. Formerly the Justin Biebers of their era, Rock This Boat is proof of how the fragile male ego can so heavily color a project. The mere fact that it's earnestly asking us to believe that a group of former teen heartthrobs can turn a crowd of (ostensibly) sensible middle-aged women into a mob of irrational teen girls, decades after their heyday, is a sign of how much we are all used to accepting that nostalgia is capable of overriding actual sex appeal.

The show's request that we willingly believe that these fans would still be obsessed with NKOTB references pop culture’s general derision of fangirls as people who can easily be manipulated into a mindless gaggle of consumers. The idea that all it takes is a little nostalgia and a passably handsome man to reduce a woman to a pile of mush is inherently sexist, it's an idea that stems from the sort of ingrained misogyny that continues to dismiss the interests of women as hysterical and overly dramatic—and it's a tool that record labels have used to peddle pop for decades. So what better way to continue milking the New Kids' appeal far past their expiration date than producing something like Rock This Boat?

The only problem is, because the show features a group that's so far past its prime and is so over-the-top in its portrayal of fandom, any rational person watching this can’t help but question the veracity of it all and, subsequently, wonder why the New Kids felt the need to get another 15 minutes in the spotlight. Maybe there's no definite answer to that, but let's just say that the show serves as a fascinating reminder that to feel ardently and passionately is not a sin—but vanity definitely is.

Rock This Boat Season 1 is now streaming on Netflix.