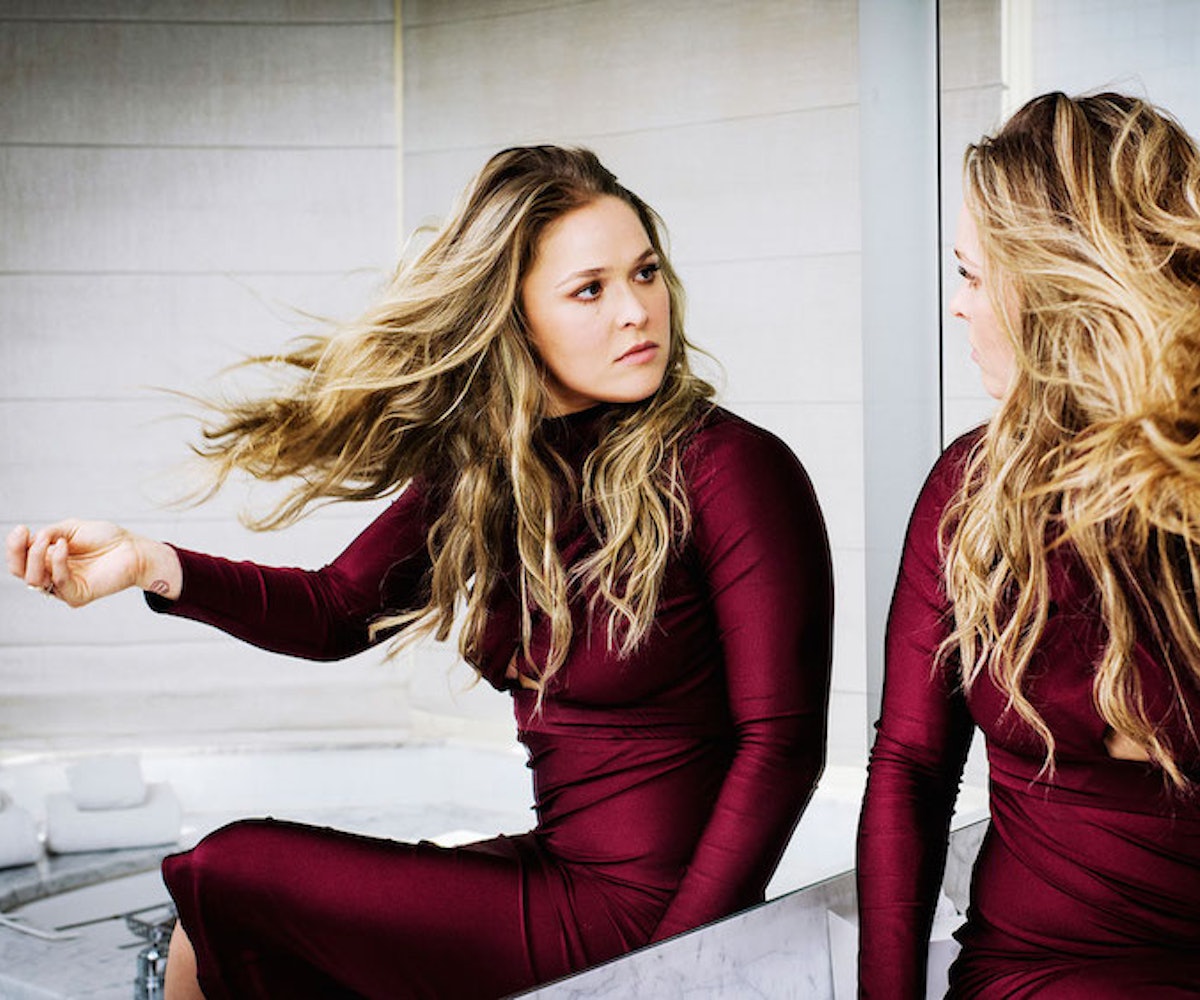 How does one prepare for a meeting with Ronda Rousey?

Do I need to work out? Eat only egg whites for breakfast? Four rounds of squats and 20 push-ups?

I wanted to be in my finest form when coming face to face with a woman who is not only the Women's UFC Bantamweight Champion, but also, like, my favorite person in the world.

I am not particularly into "sports." My MMA knowledge extends to the fact that it's kind of fun and sexy to watch people get sweaty and pummel each other. But after I heard her

pre-fight pep talk, I became a committed fan. If you haven't seen the video, or seen how Beyoncé incorporates it into her performances, here it is: "I have this one term for the kind of woman that my mother raised me to not be. I call it a ‘do-nothing bitch.' She’s a bitch who just tries to be pretty and be taken care of by someone else."

Two coffees, a sandwich, and some Advil down, I was ready to meet Rousey. And upon doing so, one thing was clear: As she navigates traditionally male spaces and makes them her own, she has made a space for all women—women who work hard and push themselves to be their best.

Instead of plopping herself down in the chair, she basically dominated it, while smiling widely. I felt like I was about to chat with one of my girlfriends.

I hear you’re getting asked about your diet all the time. "What are you eating? What aren’t you eating? How much are you eating? How long are you eating it for? What are your calories?" But forget all that—what's the meal you love to eat when there are no rules?After every fight, it’s really important that I just have a big mound of hot wings in front of me. It’s like my obsession. I’ve had points where they didn’t get me the right hot wings after a fight and I cried. Literally tears because I look forward to it for so long and I’m so perfect on my diet and I’m like I can’t wait to beat this chick and just have a plate of hot wings and a side of beer. That’s all I want in the world.

Your quote about "Do Nothing Bitches" hit a note with our readers. Do you have any advice about how girls can avoid becoming "do nothing bitches"? Also, are there are any days where you just feel like a “do nothing bitch”?    The way I was brought up... We lost my dad at a very young age and my mom had three of us. She had three jobs in the meantime to be able to take care of all of us and I respect her so much for being capable of all of that. I think that being able to see that and know what my mother was capable of, I had so much respect for her. And she had such huge reasons to respect herself. For a woman to be ambitious and find reasons and ways to respect herself, and have things to be proud of and not be proud of a guy that she’s landed… I think that should be encouraged in women: to want to accomplish something in their lives.

I’ve almost seen a bit of the opposite happening. The feminist movement was going one way for so long and it seemed like we were taking a couple of steps backwards for a little bit. I started hearing "How are you ever going to find a husband, if you’re such an intimidating person," "You’re so accomplished, no man is going to want to deal with that." I’m like, "Why would I want to find a man that is so easily intimidated? There are many other intimidating things in life than me. If I’m too much for you, then life’s going to be too much for us."

The end goal isn’t finding the wealthiest man possible to take care of me—it’s finding someone who will bring the best out of me. I want to find someone who has hustle to match my own and someone who we can bring the best out in each other. It’s so easy to jump out of bed and want to go handle everything in the day after the person waking up next to you is so excited to handle everything they have going on. But it’s hard to feel good about yourself sitting on the couch all day playing Madden if your girl is getting up and hustling. I don’t want a guy that feels the need to dim my light in order to make his look brighter and I’m tired of seeing girls encouraged to be as dim a light as possible so as not to obscure their man. You should both rev it up.

I would like to have a partner in my endeavors instead of being a cheerleader for someone else’s and I’m tired of seeing that being portrayed as a bad thing. Trying to gain your own respect instead of living through somebody else’s is not a bad thing and I think it should be encouraged.

This is something that I talk about with my girlfriends all the time. We’re all so hard working we’re all so independent, but finding that man has been really hard. Has it been hard for you? Is it hard for you? How do you deal with that? How do you stay strong and not give up on love?I just don’t have it in me to give up on anything, I think. I don’t depend on a man to make me happy. That’s not the key to my happiness. It’s an amazing plus when it’s right, and I’m not in a rush to find that. I think that it will find me—and I’m not weeping away the days until then. I’m so excited to see who that person is going to be. How exciting and awesome is it going to be to find someone who is just as excited to take over the world as I am? I really can’t wait.

When you’re a strong independent woman going into a new relationship, sometimes it’s hard to draw the line between being independent and then trusting someone enough to allow them to help you. How do you navigate that territory?I think that it goes both ways. I think that a man has to be willing to let you help him and you have to be willing to let him help you. I think you’re supposed to take care of yourself and each other; it’s not one person taking care of both. I don’t feel bad about letting someone help me if I need it, and I get so excited thinking about the day when I get to be there to help them when they need it. If the person is right, then there isn’t even a moment where you have to feel bad about it at all. If you’re with the wrong person, they’re going to make you feel bad about accepting help or make you feel dependent, or like you owe them something for accepting help.

Street harassment is something that women have to face everyday. I was wondering if you could give us some tips as to how you deal with it.You know what? I haven’t had to deal with that since middle school. No one in L.A. walks, but in middle school I had to walk home from school everyday and I would have to pass this one house that they were doing construction on every single day they were like whistling at me and I was like a little kid—15 or 14. This is one of those instances where social media could do some good. If you’re going past the same site everyday, bust out that phone and film those mother fuckers and put it out and be like, “These guys on this corner are fucking assholes.” As my mom says, "Thou shalt not say 'fuck you' to assholes is not one of the ten commandments." There are a lot of ways social media is a force for the bad, but this would actually be a force for the good. People do stuff like that because they don’t feel accountable, so you if you got somebody who is harassing you regularly you catch that mother fucker and put him on blast.

If you could tell your younger self anything, what would it be? Whatever you’re worried about isn’t going to matter in a few years. And you look gorgeous.

There’s a lot of talk at the moment about girl squads. If you could pick five women to be in your girl squad, who would they be?Oh, this is hard! You know what, I’ve actually already written a best friends list! We really made a best friends list of all the people I need to be friends with. Let me reference it—I don’t want to leave anyone out… Okay, it’s Serena Williams, Beyoncé, Lorde, Joan Jett, Amy Schumer, Taylor Swift, P!nk, Chelsea Handler, Ellen, Adriana Lima, Milla Jovavich, Cara Delevingne, and Jennifer Lawrence. Yeah, Jennifer Lawrence is definitely coming with us.