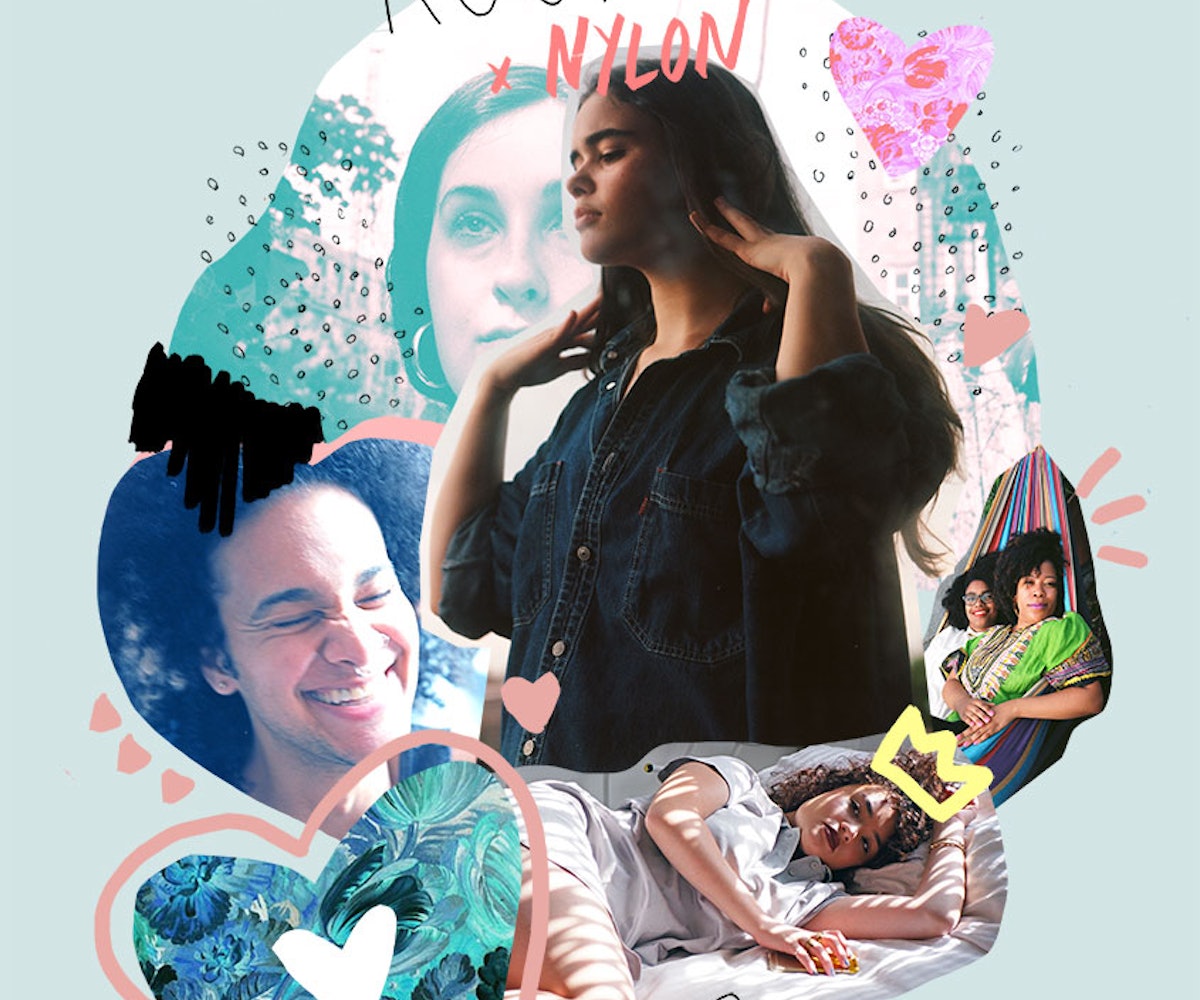 Being the editor of Rookie often means just screaming from the rooftops about the people and things that I love, so I was stoked to choose a handful of people to feature in NYLON’s It-Girl issue. The “It-Girl” has long been associated with trendiness, but that implies some kind of expiration date on her influence. The coolest It-Girls not only capture a cultural moment, but transcend it in time. The It-People you see here—and let’s go with “It-People,” since we have some agender folk here, and “It-People” sounds like a cool science-fiction film—are stylish and rad, but nothing about them is disposable or just a look. What stands out to me in these interviews is how often the topic of confidence comes up, and how these artists of all kinds inspire people just by being themselves and being visible. Rookie Yearbook Four, our latest print compendium, comes out on October 20, featuring many of the babes who contributed here as writers, photographers, and interview subjects. Rashida Jones even wrote a life advice comic for it, and there’s a preview of that here. We hope you enjoy, and glean as much “It” inspiration from these killer queens as possible.

One of my favorite past­imes is creeping on the social media accounts of models and selfie masters @mynamesdiana and @boredbarbara. Judging from their passionate fan bases of like-­minded young women, I’m not the only one. Here, they discuss social media and the power of creating yourself in your own image. –TAVI GEVINSON

Briana Gonzalez: Who is your favorite photographer to work with?Thuan Tran shot me for Karmaloop, and he just knew what I would be comfortable doing and how I would look best. To this day, I think he took some of the most flattering pictures of me. Working with photographers you click with can really make magic.

BG: Do you believe how you use Instagram or what you see there has an influence on what you do?What I see on Instagram doesn’t really affect me in real life or the person I am. It doesn’t go beyond the app for me.

BG: Do you use social media to get a message across or just for fun?I use it for both. I post personal things on my Instagram, and I always forget that thousands of people are following me. It’s like I can’t grasp how big of an audience is looking at my stuff. But it also helps spread a message so effortlessly. I’m 100-percent myself and people see that, and they love it. They learn it’s okay to be yourself, and not be perfect. It also helps in showing young people that we are all in this together. We will be okay.

Briana Gonzalez: What gave you the confidence to start modeling?I didn’t think I could do it until I started, and people seemed to not care about my nontraditional aspects. It’s dope that there’s a diverse beauty movement going on where girls can break these fashion stereotypes. I would’ve thought it was impossible a few years ago.

BG: Are there any particular photographers you really enjoy shooting with?Petra Collins! She’s the best and shooting with her is super-chill, just a bunch of friends hanging out, taking cute pictures. We met at one of her openings, and ever since she’s been my favorite babe.

BG: Do you use social media to get a message across or just for fun?Social media for me is all fun, but with people being unapologetically themselves comes inspiration. I love to see carefree girls on Instagram, because it shows real people being real. The media paints women as perfectly airbrushed and primped mannequins, but on the Internet, you’re in control of what you post. Social media in itself sends a message.

I’ve followed artist Grace Miceli for years, collecting her zines and stickers, and was stoked when she started an online collective called Art Baby Gallery. The affection she has for the corniest of pop-cultural allusions speaks to my soul, as does her description in this interview of her ideal day off. –TG

Mads Jensen: What inspired Art Baby Gallery?It evolved from my desire to have a physical gallery space to showcase all of the exciting work that I was seeing online, but due to financial limitations, I had to use the Internet. I wanted to find a way to stimulate the practice of my friends and peers. My goal was to create an encouraging community.

MJ: What do you think you’d be doing right now without the existence of the Internet?I would own a pottery studio and be self-­publishing the third novel in my sci-­fi/fantasy teen romance series.

MJ: How do you decide which of your works to translate to clothing?I’m still figuring it out, but basically, I try to imagine the perfect outfit to wear to the mall.

MJ: What sort of art have you been consuming lately—music-, literature-, and art-wise?Tinashe, Women Who Run With the Wolves, and Misaki Kawai.

MJ: What would your Ferris Bueller’s Day Off look like?Okay, so first I eat a whole pizza for breakfast and then I take an Uber to a rooftop pool where Drake gives me a solo performance of my favorite songs while I swim, and then I go home to watch Netflix and chill, alone.

Another Round is a podcast about race, gender, pop culture, and being a person (all discussed while inebriated) by Heben Nigatu and Tracy LaFway Clayton. They conduct stellar interviews and invent drinking games, like “Is this the name of a white dude who works at public radio, or just some syllables I mashed together?” Behold: A peek into their brilliance. –TG

Brittany Spanos: The two of you seem to have been close friends long before joining forces on Another Round. How did you meet?Heben Nigatu: I had been a huge fan of Tracy’s Twitter, like everyone else who enjoys laughter and general mirth, but we first officially met when Tracy started working at BuzzFeed over a year and a half ago. We gravitated toward each other and collaborated on a bunch of projects. And so when podcasts became a possibility at BuzzFeed, it seemed like a no-brainer.

BS: As writers and podcast hosts, you alternate between lighthearted humor and serious politics without ever being tacky, which is difficult! How do you maintain that balance?Both: How do you address racism, gender inequality, and general injustice while also being personable? We do that every day! We do it by just being our normal, regular, full selves. The conversations that we have in the studio are the same ones that women of color have in their own personal circles all the time, going from funny to serious to weird in the same breath. The only difference is that we’re doing it in front of a microphone. We try to mix it up and throw in a joke or share a ridiculous story when we know we’ll have a heavy topic like police brutality. But overall, this is just the way we operate out of the studio, so it follows us into the studio, as well.

BS: Not to make you choose (but to make you choose), which guest or conversation has been your favorite thus far?HN: This is an impossible question because each interview we do becomes an instant favorite and we learn so much from all of our guests.Tracy LaFway Clayton: It’s a toss-up between Stacy­-Marie Ishmael and Audie Cornish, but I would like to make it plain that I love each guest individually and equally!

BS: If Another Round were an alcoholic beverage, what would it be?Both: Whiskey, of course! That’s what we actually drink on the show, usually Woodford Reserve because Tracy demands that it be Kentucky whiskey. We tried tequila once and we will never do it again.

The killer fashion sense and astute observations of this style blogger are at gabifresh.com for all of our lucky eyes to see. As swimwear designer and self­-proclaimed “queen of the fatkini,” Gregg has made radical self­-love through personal style more accessible. She continues to do so here by sharing her favorite confidence­-building Beyoncé lyric. –TG

Rian Phin: Do you actively seek style inspiration or does it come to you naturally?A little bit of both! I definitely have ideas already floating around in my head when it comes to styling outfits and designing swimwear, but I also make a point to get inspired at modern art museums, from street style, and yes, from Bey.

RP: What’s your favorite “fashion rule” to break?All of them! I hate rules of any kind, and especially ones that do nothing but make women feel badly about their bodies. Rules make us feel like we have to use clothing as a way to disguise our “flaws.” I love proving people wrong by looking fabulous in everything I’m told not to wear. From horizontal stripes to crop tops and bikinis, there’s almost nothing I won’t at least try.

RP: How have women responded to your designs?I love providing statement suits in an industry that has historically ignored women my size, or only given us matronly options. The plus-size bikini movement has totally changed things. I’m really proud I played an important role in that happening. I have women reaching out to me daily telling me that they’re wearing a bathing suit for the first time in years (sometimes over a decade!), which is the ultimate feel-good moment.

RP: What do you listen to while you’re getting ready?It depends on where I’m going! Usually Pharrell, Rihanna, Fetty Wap, Beyoncé...anyone who makes me feel like a boss.

RP: Best Beyoncé lyrics to describe your style?"Take it one step further/ Freakum dress out my closet/ Yoncé fillin out this skirt/ I look damn good, I ain’t lost it."

NEXT UP
NYLON Nights
Yunè Pinku's Party Playlist Is An Ethereal Pop Fantasia
Beauty
This Viral Black Honey Lipstick Dupe Is Only $5
It Girl
Madison Bailey Is Embracing The "Elegance" of Being in Her Mid-20s
Fashion
Kali Uchis Stars In H&M Studio’s Glamorous New Spring Campaign
Style + Culture, delivered straight to your inbox.