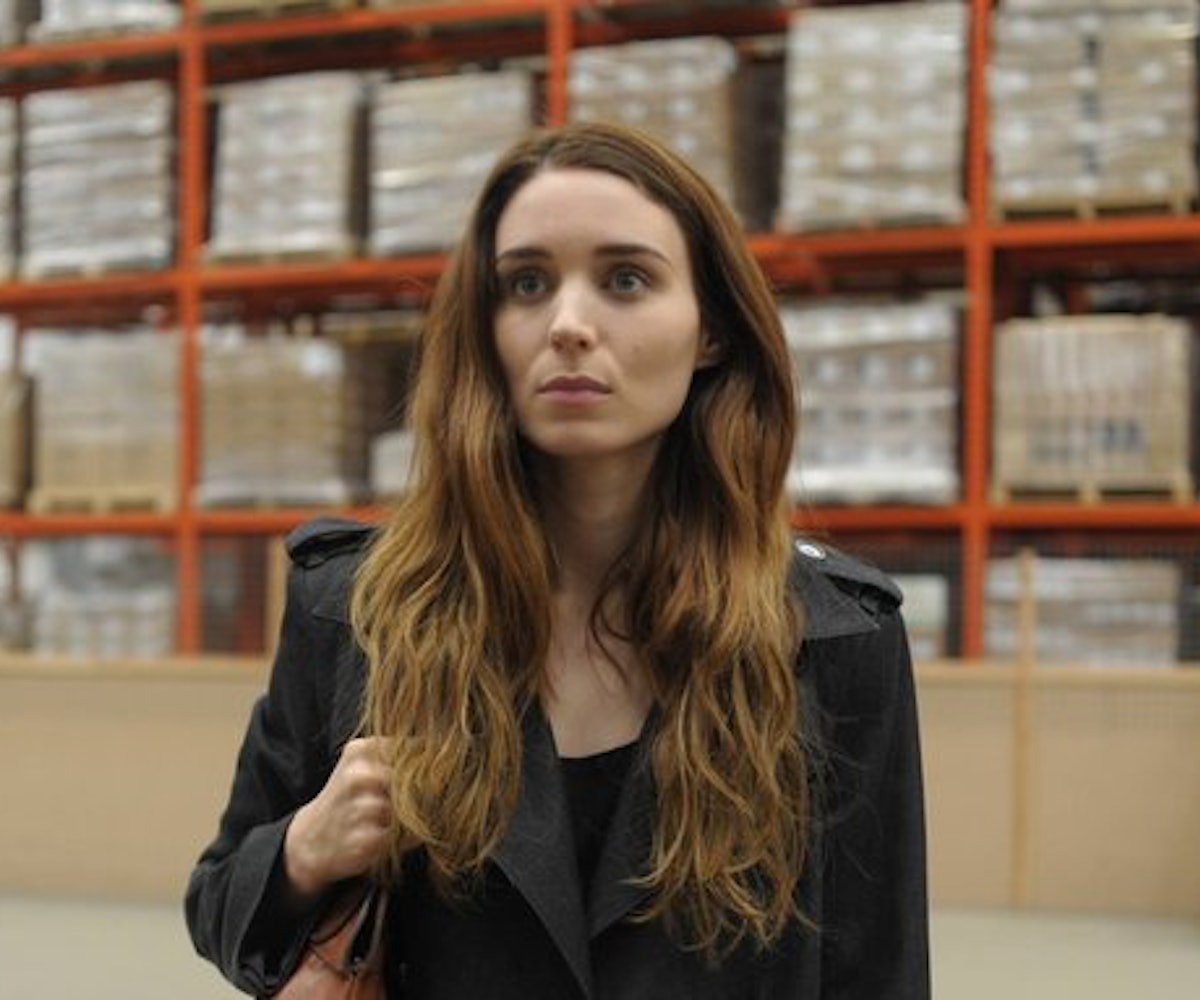 “I just haven't seen it yet,” is what she tells me when I meet her in a hotel room in Manhattan’s Lower East Side to discuss the harrowing project. The movie, adapted by David Harrower from his own play, Blackbird, stars Mara as a woman traumatized by a sexual relationship she had with a neighbor, Ray, when she was in her very early teens. It’s years later, and Mara’s blank-faced Una comes across her abuser’s photo in a magazine and decides to show up at his new place of work, where he is working and living under a new name after serving time in prison. What unfolds is an unflinching two-hander between Mara and Ben Mendelsohn, who plays Ray. The film, directed by Benedict Andrews, poses difficult questions about love, consent, memory, and trauma, and we talked to Mara about that and much more below.

Is this a hard movie to discuss given its subject matter?

Yeah, and this movie is not going to make you feel any better about the world.

When it first screened at Telluride, there were walkouts. Does that please you?

I don't know if it makes me pleased, but yeah, I think that's what the material is supposed to do. It's very polarizing material, so I guess that's good.

Do you see the relationship between Una and Ray as black and white or is there a gray area? He committed statutory rape, and yet she claims to be in love with him.

I think that's black and white—that it's statutory rape. It is abusive what he did to her, and it's totally black and white, but I think that there's a ton of gray area as well. At least for these two people. I mean certainly, Una doesn't feel that way. To her, it's totally gray. She can't understand it, she does think that it was love, not abuse.

Do you think that she loved him?

When I made the film, I was just making it from her perspective, so yes. But if I was an outsider watching it, of course, it's like, you're 12 years old, you don't know about life. But for her, yes, she did love him.

Do you see young Una and old Una as two completely different characters or did you try to find shades of the younger person in your portrayal of her as an older person?

I did try to find shades of that because I think in many ways, she never grew up. She's totally stunted or stuck back in that time or trying to recreate it. Trying to get that feeling again. I think it's defined every single aspect of her life, so she can't get away from it.

Did you have any contact with the younger actress and meet her or try to get to know her?

Not a ton, but during the casting process she made a bunch of videos so I had those to watch, and she was there a few days in rehearsal with us. She recorded all of my dialogue for me, that was appropriate for her to record. So I had her voice in my head every day because we wanted to match the dialogue to what she sounded like.

Do you take any pleasure or joy in playing a role like this? Is it fun?

I mean, it is fun for me, but not fun. Like what does fun mean? To me, it's all about the experience. I mean, yeah, it was intense, and there were days that were horrible, but I guess that feels good to me.

Was this character hard to shed at the end of the day?

On this one, I couldn't. I was there for four weeks, so we were shooting unbelievably long days, having to get so much in one day. Then you get home and you literally just go to sleep—it's not like there's even time to do anything else. It was really intense, and I kind of just had to stay in that place.

How about after the shoot? How long does that linger?

It always lingers on any shoot, and then there's always a re-entry period because when you're working, you're in a situation when you're with all these people all day long. People are like, "Oh, do you need water?" You don't have to do anything normal. When I'm shooting, I don't have to call anyone back and you get all these passes that you wouldn't normally get. I don't have to go to the post office or do any of this real life stuff, including communicating with people, so you just go into this black hole. And so no matter what it is, if it's a fun movie or an intense movie, when you have to reintegrate into real life, it's a bit of a shock.

What was the last fun movie that you made?

I don't know if I've ever made one. I just worked a few days with Gus Van Sant, and that was light and fun—for me anyway.

Did you enjoy making a two-hander opposite Ben Mendelsohn?

I loved it. We rehearsed a lot together because it’s so much dialogue, and we instantly had a connection. I felt super safe with him. We shot the movie almost in chronological order, so we were in that lunch room together in the beginning. We created our own little world, much like the way Ray and Una did. We had our own little secret world, and it was hard when the other actors came in. I'm sure it was harder for them because I'm sure they could feel that, that we were like, "Don't come into our world."

Do you see remaining private as a way to help audiences buy you as a character?

Yeah, I think that's great. I don't want to lose that, anyway. I have people that I've known since I was in kindergarten, and they think that I'm a mystery to them.

So that's naturally how you are?

I guess. I don't feel that way about myself. It's definitely not calculated.

You made headlines earlier this year when you told a journalist that you had never eaten pie before filming A Ghost Story. Does that flip you out?

It did bewilder me because, to me, it was just normal. My mom was like, "You ate pie, what are you talking about?" And I was like, "No, I didn't." I don't know, I was a really picky eater. I don't really like sweets. I didn't like cake either. I just never had a pie before; I thought it was gross. I also didn't have spaghetti until I was 14 or something.

Now that Claire Foy is taking over the role of Lisbeth Salander, is it going to be strange for you to watch another actress play a character that you helped make iconic?

God, it's weird. I should have prepared myself for these questions today because it's so obvious. To be honest, I really hadn't thought about it, because it's been so many years and I spent so much time thinking about it and wanting to do it. But then at this point, it's just been so long, I don't know what it will feel like.

What can you say about Mary Magdalene, which I think is a movie that a lot of people are anticipating?

It's not a religious film. I'm sure it'll be controversial, spiritual, and feminist. Garth Davis, the director, is a very special person, and I don't know what the movie will be, but I know it will be special. And I'm sure it'll help offend some people.