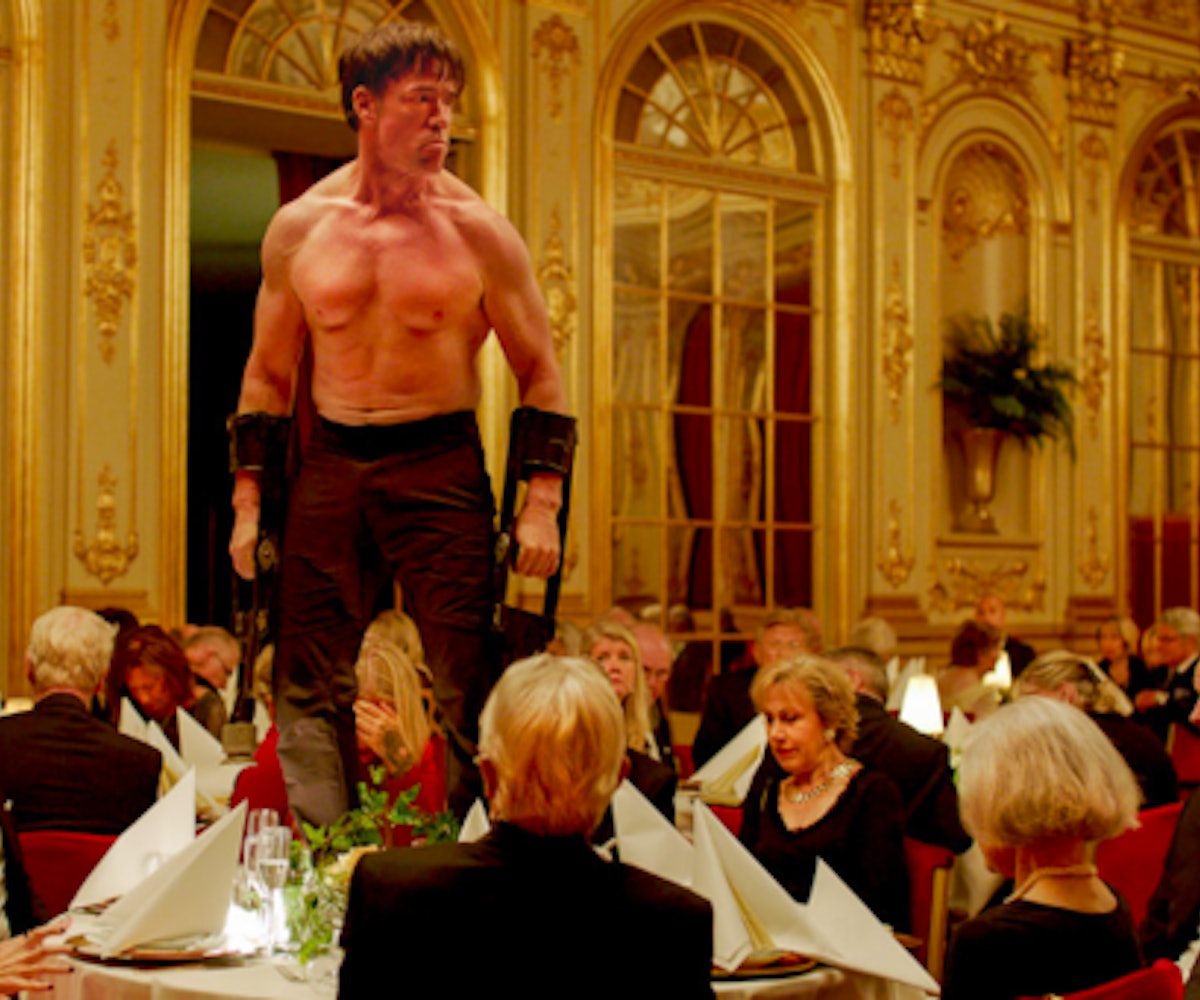 Photo courtesy of 'The Square'

As art forms go, TV always had the edge on cinema when it comes to timeliness. A movie production’s a big, million-faceted thing and a multi-year gestation period can make it hard to capture that up-to-the-minute feeling. All the more impressive, then, that Ruben Östlund’s newest feature, The Square, smartly tackles (head-on, and at a breakneck sprint) such of-the-moment concerns as safe spaces, clickbait, and even historical statue demolition. The film follows the personal and professional tribulations of museum curator, Christian (Claes Bang), as he prepares to unveil a controversial new installation, also called The Square, a sanctuary zone where all humans share burden and responsibility. The public reception is, in a word, rapturous. A Palme d’Or winner upon its premiere at Cannes, now a magnet for breathless critical praise, it’s the most distinctly modern film of the year in addition to being one of the best.

It takes a brash, shrewd man to pull off this high-wire act, addressing the big concerns of today without collapsing into self-righteous histrionics. The Sweden-born Östlund is that man, and then some. He captured global attention with his wickedly funny masculinity satire Force Majeure in 2014, and he’s only expanded the ambitions of that same brutal comic sensibility with The Square. Östlund took a moment to sit down with us for a discursive conversation about electronic dance music, his covert act of subversion against the Swedish monarchy, and the fragile human souls of animals.

My favorite scene in The Square was the bungled statue removal. How did you manage that shot?

We did that with computers. But it’s funny—that statue is of the first king of the House of Bernadotte, which rules Sweden right now. That’s the family the current king is related to. And the movie takes place in a parallel Sweden where the monarchy has been abolished, so at first, I was thinking we should just remove the statue and lift it away. But when we checked with the king to see if we could shoot in the real castle, after a long discussion of almost two years, he said no. So I was a little angry and thought, Yeah, why not just chop the head off? A little act of revenge.

Did you find any problems adapting your sense of humor to the English language?

I was afraid of that when I first decided to work with Elisabeth Moss and Dominic West. Though I had done a little work in English on Force Majeure, when I started to try out the situations, you could tell that if the situation was strong enough, that’s where the comedy would come from. You can relate to it in any language.

The edit of the film that’s getting a release in theaters is a few minutes shorter than the one that played at Cannes. What got cut?

It’s just tightened up a little bit, no full scenes got cut. It’s all in the rhythm of editing. Nobody’s going to miss out on anything.

I heard this film was made for approximately 5.5 million USD. It’s a pretty big production with English-language stars. How’d you keep costs so low?

It’s in the way we are producing. I own a production company together with the producer of The Square, and we’re in control of how we use the budget, so we put a lot of the budget into actually making the movie. It’s not like we cut off 10 percent and keep it in the company—we spend everything on making the movie.

Both your new film and Force Majeure featured scenes of characters dancing to electronic music. What is it you like about EDM?

I think that it’s a good way of putting some funny contrast into the film. I was trying to highlight the culture institution dealing with great art, and how they act like youngsters in their behavior one night and go to banquets the next.

Both films also concern themselves with manhood and masculinity in a pretty major way.

Oh, yeah. The main character of the film turned out to be a chief curator of a museum, which I thought was an interesting position to test manhood because you’re in a powerful station but with so many strings attached to you. It’s a bit like being a director. I used a lot of experiences from my own life when I was writing the film, times when would I end up in personal dilemmas.

By the end of the film, Christian’s making overtures to change his ways. Is there a moral dimension to this film? Are we to take it as instructive, on how to live a better life?

Yes, but the reason he’s got the ability to be a better person by the end, is because he’s losing his position as chief curator. Suddenly, he’s on the bottom with nothing more to lose, and that’s how he’s able to start over and deal with his personal problem.

So that’s the cost of being in charge?

I’m interested in comparing human beings to monkeys. If you look at the monkey herd, the alpha male is always stressed. He’s got to deal with the power dynamics of the group, distribute the food, make sure no one will revolt against him, tend to the women. Being on top, it’s very stressful. It’s very interesting to look at animals and their similarities to us. When we did an exhibition about the thematics of The Square in an art museum, we made a video of clips from YouTube where you see animals helping other animals. There’s one video of a bear saving a crow from drowning. We try to say humans are compassionate and we have feelings, but when you look at these videos, you see animals have emotions. It’s beautiful to me.

In the movie, there’s the video of the exploding orphan girl that they use to drum up buzz and this modern idea of “clickbait.” They’ve got that term in Sweden?

Yeah. In the movie, The Square is a kindly art piece, a humanistic traffic sign. It tries to create awareness of altruistic ideas. As I’ve gone to different cities to talk about selling the film, people are reacting in the same way: "Yes, this is all good, but what can I do with it?" When it comes to journalists, critics, even regular people posting on Facebook, they always want to position themselves within the content. And so to promote The Square is a bit of a humblebrag feeling because I have to sell it and figure out how to spread an altruistic idea. I thought it’d be satirical if, in the film, they do something so cynical as to be sadistic to get people interested in altruism. And it works!

So there really is no such thing as bad publicity.

In many ways, I think it is like that. You look at democracy today, the politicians, it doesn’t matter if you write bad things about them because that gets them into the people’s mind anyhow. As long as you’re on someone’s mind, if they know you exist, you’ve got power. It’s a media crisis when it comes to how we’re reporting on the things we don’t like, and giving them attention. Same with terror events. How do we report on these things in a way that doesn’t make them happen again? It’s like there’s a PR agency for these terrorist groups.

It all gets to be rather frustrating. Do you feel at all cynical?

You’ve got to remember that journalists’ responsibility is completely different from that of someone on social media. The journalists, their problem is figuring out how to organize and say, "Hey, how do we deal with this problem [of clickbait]?" Instead, we all get caught in economical crisis, on the edge of bankruptcy, so they must resort to more and more ethical compromises. I can see how it’d make a person cynical.