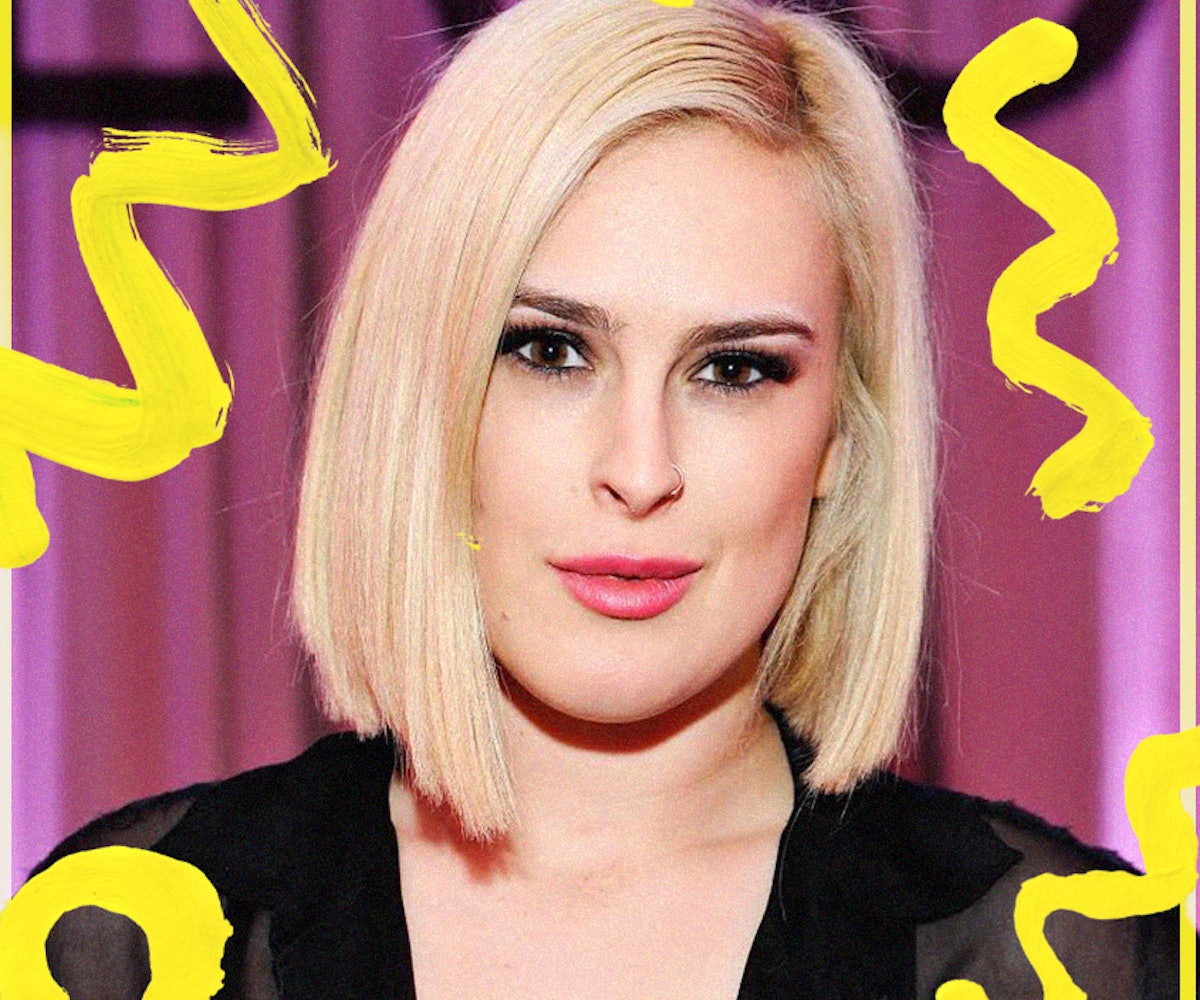 For one person to emerge from the Hollywood machine cool, articulate, and generally unscathed is pretty remarkable. For three progeny of actors to be legitimately awesome? Well, that is near unheard of. But the Willis sisters—yes, daughters of Bruce and Demi— aren't just generally down to earth; they spend their time promoting other equally rad ladies.

And while the eldest Willis, Rumer, isn't the sister who has spoken openly on

emphasize inequality by freeing the nipple

, but she has quietly been nursing her own acting and music career. Most recently she is in the adorable romantic comedy,

, which is a sweet and light flick about a young woman's quarter-life crisis—plus, what it means to leave New York City. In it, Rumer plays, well...basically Rumer; a tough-love bartender who ends up being the unlikely pal to Jody (Brittany Snow), a confused folk-singer who has no interest in turning to EDM to make it big. The similarities between Rumer's character Emily and the girl who plays her are pretty clear; in fact, she got to wear basically all her own clothes to do the part.

Aside from dabbling in acting, Rumer is also a musician, playing around Los Angeles. (She recently did a gig where she played the soundtrack to Tarantino movies, now she is working on Baz Luhrman's oeuvre for

For The Record Live

.) She even shared with us that her father, Bruce, wants her to move to New York (

!), so she could try her hand at theater. Somehow, someway, the girls of Hollywood's former first couple have turned out to be entirely, wonderfully down to earth.

Check out Rumer in Always Woodstock, available on VOD now.

Do you think that there is a guy out there like Noah in Always Woodstock? Does a guy that sweet exist?

I mean, I hope so. It gives hope for the entire female population. I have to say, James is a great guy and he is actually really like that. He is probably one of the sweetest guys that I have ever met. I think that there are guys like that out there, you'll just have to go to some random spot to find them.

So you're suggesting that we leave New York or LA and maybe head out to some crazy artistic community. I'm sure you had a different growing up experience than Catherine, but would you ever just give it all up and go to a small town to just focus on yourself.

One-hundred percent. Totally, if I wasn't trying to be an actor, I would leave LA because you can't really have that life here. There's a lot of baggage that comes with being here like the paparazzi, traffic, and all of it. It would be nice to just go somewhere and just

Totally, do it. Are there any music projects coming out right now that you are excited about?

Yeah, I've been working on an album with Linda Perry. It's been incredible and we’re picking it up in November and December. I've also been working on this show called For The Record where we pick different directors and soundtracks from different movies and create a musical show. We were doing Tarantino for a while and we're now doing Baz Luhrmann.

You and your sisters have become known as being incredible spokespeople for being strong and amazing women. You're really highlighting inherent inequality, and are really showing what it's like to be independent, creative people, while also highlighting the fact that there are a lot of double standards that we face as women. Did you see that cat-calling video?

Cat-calling.This girl walked around New York for ten hours and had someone secretly filming her, it was part of a project, and during the ten hours she was cat called 108 times during her walk.

That's interesting. I’ll definitely check that out. I think it would be cool if someone did a social experiment like that, say, walking around a club in LA in a buttoned up T-shirt and a coat, and seeing how many people talk to you. Then see if you unbuttoned your shirt and had cleavage out. Unfortunately, we live in an industry and a society that is very focused on these attention-grabbing things. The immediate way to get someone’s attention is through the body and the whole idea of sex, which I find really sad. That's what little girls are now being taught. They need to know the power they have to choose who you can give any part of yourself to emotionally, physically, and spiritually.

When someone on the street is telling you to smile, it takes away the agency from you. Your sister had that amazing project over the summer where she walked through the East Village topless.

Yes! I'm all for the equality. I'm not saying that I wouldn't go around on a nude beach somewhere, but I'm not sure if I would walk around topless because I like the idea of whoever I would choose to be my partner just seeing that. I think, in regards to that, you should be able to do whatever you want to, and no one should be able to tell you that you can't do it. In terms of equality, I think that it is ridiculous. Not being able to breast-feed in public is also ridiculous.

It's really impressive because you and your sisters have grown up to be paradigms of feminism. What can you contribute that too, having such a great sisterhood? What makes you guys so awesome?

I don't know, we have such a great relationship. But I think you also start getting attacked and there are two roads you can go down: you can choose to let it affect you, and it will completely determine how you present yourself. You can't become what you

or you will start feeling awful about yourself. You should go down a route where you can't let anyone—good or bad—it define you. If someone tells you that you look skinny or hot, it's not necessarily a bad thing, but when someone isn't saying that to you, it could make you start feeling sad. You've got to find that within yourself so that when people say they don't like your shoes, it won't affect you. You can't let them judge you, whatever it is. Half of the things these magazines get wrong, they say I was in a relationship for six months and that he dumped me because of my "crazy antics", and they're not getting their fact-checking right. I hung out with someone for about a month and it didn’t work out, and we are still friends. That's the complete opposite,  and even if it wasn't, it shouldn't matter. Sometimes I get triggered and I want to say, "No, I wasn't dating this person for six months," but you can't.

It is so irritating that, because you're a musician and you have tattoos, the press describe your "crazy antics" and create this "poorly behaved party girl." It's 2014. It makes me so angry on your behalf and as a human being with tattoos.

It's like you get a tattoo and suddenly you're up to no good.

Your mother made a choice to shave her head at such a pivotal moment. She's always been a beautiful, sexy lady, but everyone was still so shocked.

Yeah, even back then someone shaving their head or having whimsical tattoos on their ankle was

. It’s just funny how you can have people who are still like covered in them, and I'm obviously in a different social status, but people like Selena Gomez have tattoos.

Maybe I've been on the internet too much, but in the last few years, I feel like there's been so much regression. What young women out there, famous or not, whose voices you really respect?

I don't know her that well but I think Cara Delevingne. I know everyone's obsessed with her but I appreciate her female presence. She's just one of the first models I’ve seen in a long time who has created such a presence outside of the modeling world. I think that it's really incredible how she's cracked the boundaries in that way. She has decided how people will see her without letting herself be dictated by her job. I also have to say, my sisters. I think that they are incredibly strong women, with Tallulah opening up about her eating disorder and dysmorphia and things like that. I think it's noble to open up like that because the public is just waiting to tear you apart, so it's really incredible.

When are you coming to New York, dude?

called me the other day saying, "you've got to come over here and do Broadway."

You should, that's a great idea.

I would love that.

And you have little sisters now too right?

Wow, you're the oldest of five.

Yeah, and that's another reason why I think it's so important to really create a world where being a women is not such a scary thing, because I wanna have kids too.