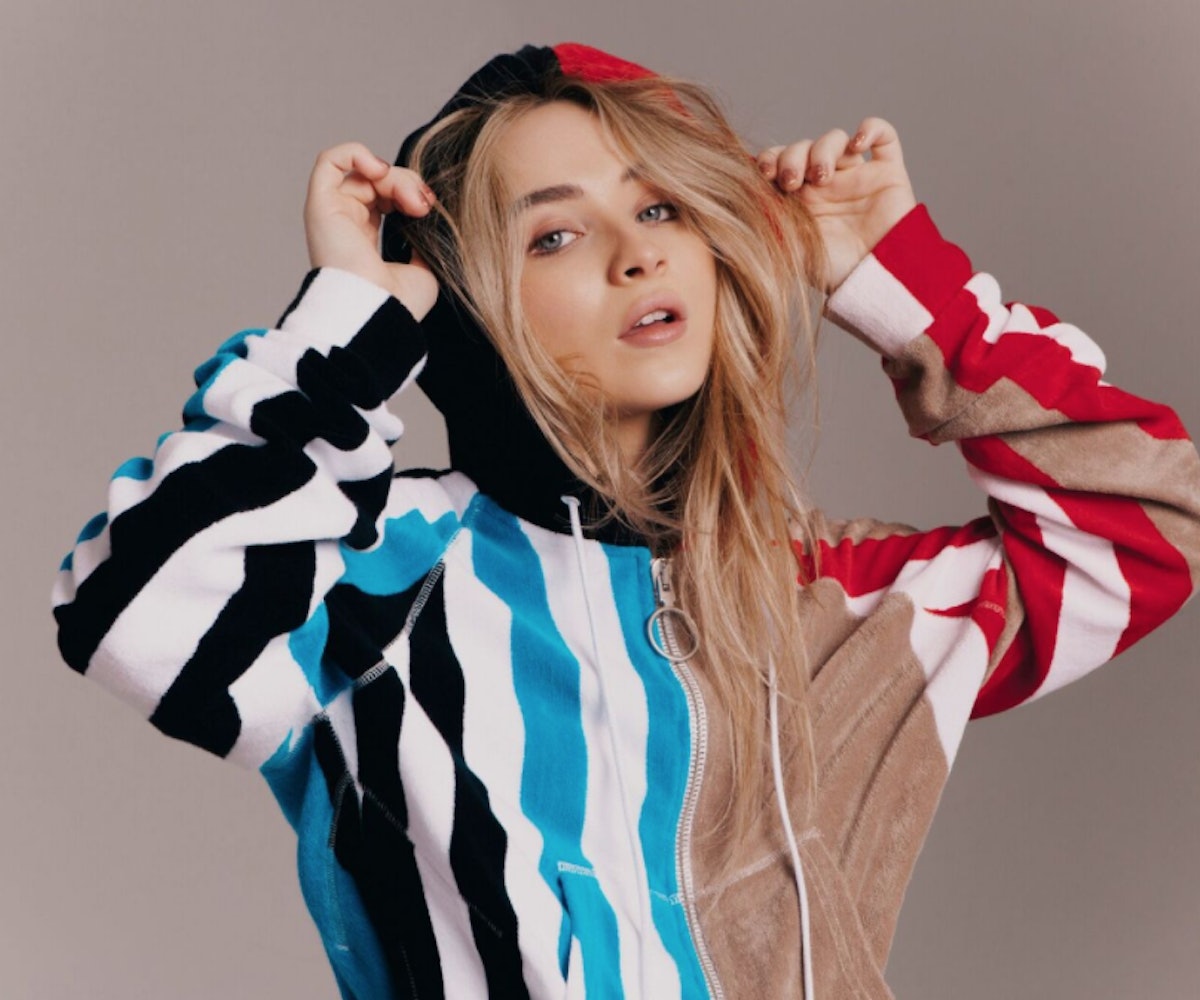 While Sabrina Carpenter first garnered attention with her role as Maya Hart on Girl Meets World, she has also had a meteoric rise in the pop music scene. At just 18 years old, Carpenter has been pulling double duty acting and singing for some time now. Most recently, she’s been touring in support of her last record, 2016’s EVOLution. Then, in July, Carpenter released electro-pop single “Why,” which showed a more complex, mature sound for the musician. Carpenter’s affinity for reworking songs has led her to put different versions of the single out into the world. Her first alternate version was acoustic guitar-based and relied heavily on her soaring vocals, but her latest one, which you can listen to and see the video for below, is accented with the rich sound of a symphony.

In the following interview, Carpenter also filled us in on her next record, her first acting project since Girl Meets World, and her dream collaborations.

Tell me about the acoustic version of “Why.”

For a while I had been doing an acoustic version of “Why.” I tend to do that with a lot of my songs because it’s really nice when you have a song with heavy production to have a stripped-back version you can do with just an instrument and your voice. We did release a version of the song that’s just acoustic guitar and my voice, but I had this idea for a while that I really wanted to do [a version] with a string quartet. The other interesting thing about songs is that you can rework them in so many different ways. It’s interesting to see how songs can sound completely different when done with different instrumentation or sung differently. The song has emotional aspects to it, so it was interesting to bring it to life in a different way.

Do you feel like “Why” reached a different audience than your prior work?

I think I felt the same way after I released the song. I was getting reactions from people I hadn’t gotten before. That’s always really interesting to see when you’re starting to take it into a world that feels universal. It was that kind of song you could listen to and say, “Oh my gosh! This is about my best friend or my boyfriend or husband or my girlfriend,” and hopefully resonate with it. I was really excited about that because it came naturally. We probably wrote the song in two hours. It became so special to me.

You began on Disney. Is your goal to be the next ex-Disney pop star like Demi Lovato, Selena Gomez, or Britney Spears?

My goal is to be Sabrina, but it is so easy to be compared to those people, because it is a similar path. I’ve never taken it as anything but a compliment. Christina Aguilera still is one of my biggest inspirations, and she started on The Mickey Mouse Club. You see where those people can go. Where those people start isn’t an indication of their talent or where it’s going to take them in a few years. I’ve honestly been having such a good time just getting to find out who I am and the kind of music I want to sing and am writing. I’ve been really lucky that the support has been there. If anything, it’s helped me to reach a broader audience—to be compared to those people is super cool.

Are you working on your next record yet?

Yes! I’ve been writing for over a year now. Since I released my last record, I started writing for this one. I’ve been touring throughout all of that. It’s a little bit harder to have all your thoughts in a period of time. Some people will take time off and write for weeks, months, or whatever it is, and I’ve been balancing both while being on the road. It’s been really cool because I’ve been able to see the world as I got to write. I get to have these experiences and go into the studio to see what I can make of it. It’s coming soon, but I do want to take my time. I have been taking my time to make sure it’s where I want to go. It’s so easy to rush into things, and I wanted to take my time with this one.

Is this record going to be an evolution of sound?

[Laughs] I can’t call it “EVOLution” [again], which is a bummer because it will probably be another evolution. For me, personally, I always try to experiment and take risks. I’m the kind of person who gets bored pretty easily. I think it makes it more fun to create something that feels new all around. It’s not how it sounds, but visually you can create something new. It’s a big arts and crafts project. There are really no rules. I’m really excited for everyone to hear it.

Are you working on any TV or film projects?

Not TV projects, but I filmed a movie recently that we finished a couple of weeks ago. It’s called The Hate U Give. It’s based on an incredible book called The Hate U Give by by Angie Thomas. It’s a wonderful cast. I was really excited about it because it was something I was really passionate about. I was a huge fan of the book and the story. As far as that side of things, I finished working on the show [Girl Meets World] and went straight to touring about a year ago, so it was nice to get out of that for a minute and do something I’m really passionate about. I have been really picky about what I wanted to do next. The last thing I did really with acting was the show, so I’m excited to see this movie.

Which artists are you looking up to now?

I have this really, really bad obsession with SZA. Luckily, we live in this world where it’s Christmas for music lovers, and we’re constantly being exposed to songs each week. Sometimes it’s overwhelming. I’m usually listening to new artists on Spotify or singles that are out. The last body of work that I could listen to from start to finish is SZA.

Who do you want to collaborate with that you haven’t yet?

That’s so hard. I feel like there are so many incredible people musically and in the songwriter world that I respect so highly. In the songwriter world, Sia, Tove Lo and Ed Sheeran are such talented songwriters that to collaborate with them in that world would be great. Musically, I love Bruno Mars and that’s one of those “go big or go home” dream collaborations.

NEXT UP
Entertainment
Harry Styles Is Performing At The 2023 Grammys
Entertainment
Hawa Has Her D'Angelo Moment In Playful "Actually" Video
Entertainment
Chloe's "Pray It Away" & 9 Other New Songs Out This Week
Entertainment
19 Niche Music Festivals For Every Type Of Person
Style + Culture, delivered straight to your inbox.