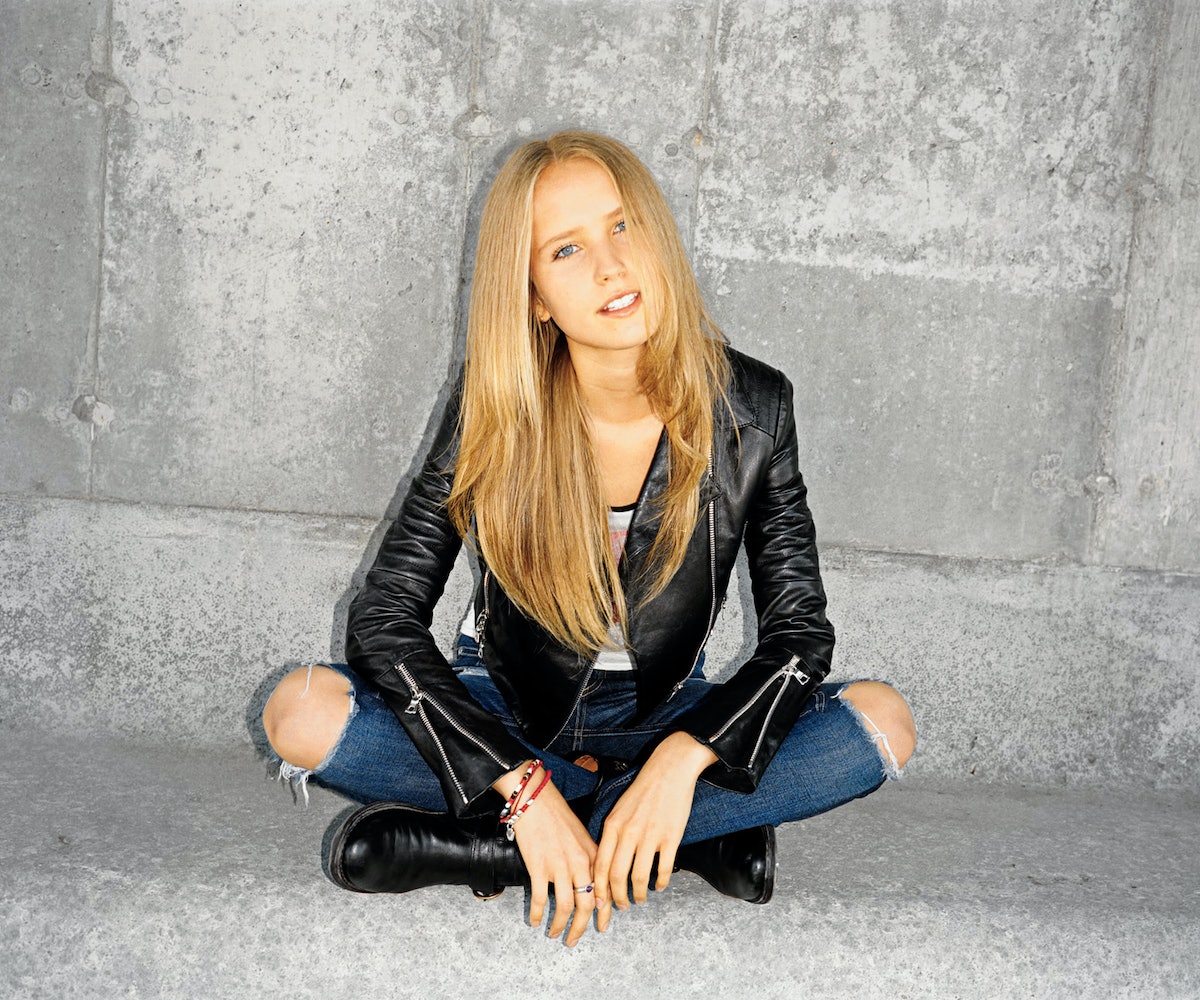 News broke this afternoon that Sailor Brinkley Cook and her model mom, Christie Brinkley, have both been signed to mega modeling agency IMG. We can't say we're surprised. At only 15 years old, the younger Brinkley already has a magazine cover under her belt and was named one of the 50 reasons we love the USA in our November America issue.

We chatted with the Brinkley Cook about her recent trip to Africa to fight elephant and rhinoceros poaching, her model BFFs, and how she goes from being a big-time model back to being a cool teenager. Don't forget to check out all of her photos from Africa in the gallery too, including a pic of Sailor with her adopted baby elephant. Your heart will melt, we promise.

Hi Sailor! I heard you just got back from a trip to Africa. What made you want to go there?

I was helping to stop rhino poaching and stop elephant poaching. I was the only one under 20 years old on the trip, so I wanted to go there to make people my age into aware of what's happening to the elephants and the rhinos. A month before we went to Africa my mom told me, and it was sort of a surprise. She was like, "Hey Sailor, I just got asked if we could go on a trip to South Africa and Kenya to help stop rhino poaching and elephant poaching." I looked it up and got some information on about the poaching in those areas, and I thought it was crazy what was happening, including the fact that both elephants and rhinos could go extinct in the next ten years. Of course I said I wanted to go and help out.

What was the most exciting thing about the trip?

Adopting my own baby elephant was crazy. We went to an orphanage called the David Sheldrick Wildlife Trust. Anyone can come in and adopt one for $50, so my mom adopted like five, and I adopted one of my own. That was very amazing. My second favorite is when we were in South Africa on top of a mountain and a rhino came right up to our car. It's horn was touching our car. That was pretty crazy.

That definitely came later. When I was younger I was sort of awkward, so [modeling] was never in the cards. [laughs] I never thought I would follow what my mom did. My sister didn't, no one in my family did. But then I turned 14 and I sort of got out of my self-professed awkward stage, and everyone was asking me if I modeled, so I thought, "Hey, why not!?" I went to a couple of go sees and I was successful. Then I signed with IMG and it's been great! I'm excited.

Did you get any modeling tips from your mom?

Do you have other friends who are models that you share tips with?

I am friends with Ireland Baldwin. She just signed with IMG and she's really nice and sweet. We're sort of internet friends and we used to hang out when we were little. Before a shoot a while ago I texted her and was like, "I'm really really scared. What should I wear? Is it hard? Does it come naturally?" She was like, "Stop worrying!" and gave me advice.

Is there a model you look up to?

I love Karlie Kloss. She has such a different look than I do, but I love how she has her own healthy cookie company. She's so fit and awesome. I love food and I love healthy stuff. I definitely want a career like Karlie Kloss because she works it in the kitchen and in her modeling. When I get a older I want to have a little shop for raw and vegan food. I love making raw food. That's my specialty because I'm vegan and dairy-free and gluten-free and stuff. Whenever I come home from school I'm always looking forward to finding a new creation and then making it for dinner.

What's your favorite food to make?

Is it hard to go back to being a "normal" 15-year-old after spending a day on a shoot?

Honestly, it's been really normal so far. My whole entire life I've been in a school with the same people, so they've never seen me any differently than who I am. When I started modeling people asked me questions like, "How it's going?" but they still treat me completely the same which I'm grateful for.

What are your favorite things to do outside of modeling?

What would you be if you weren't a model?

I'd probably want to be a photographer with a raw food cafe that works at a magazine on the side.