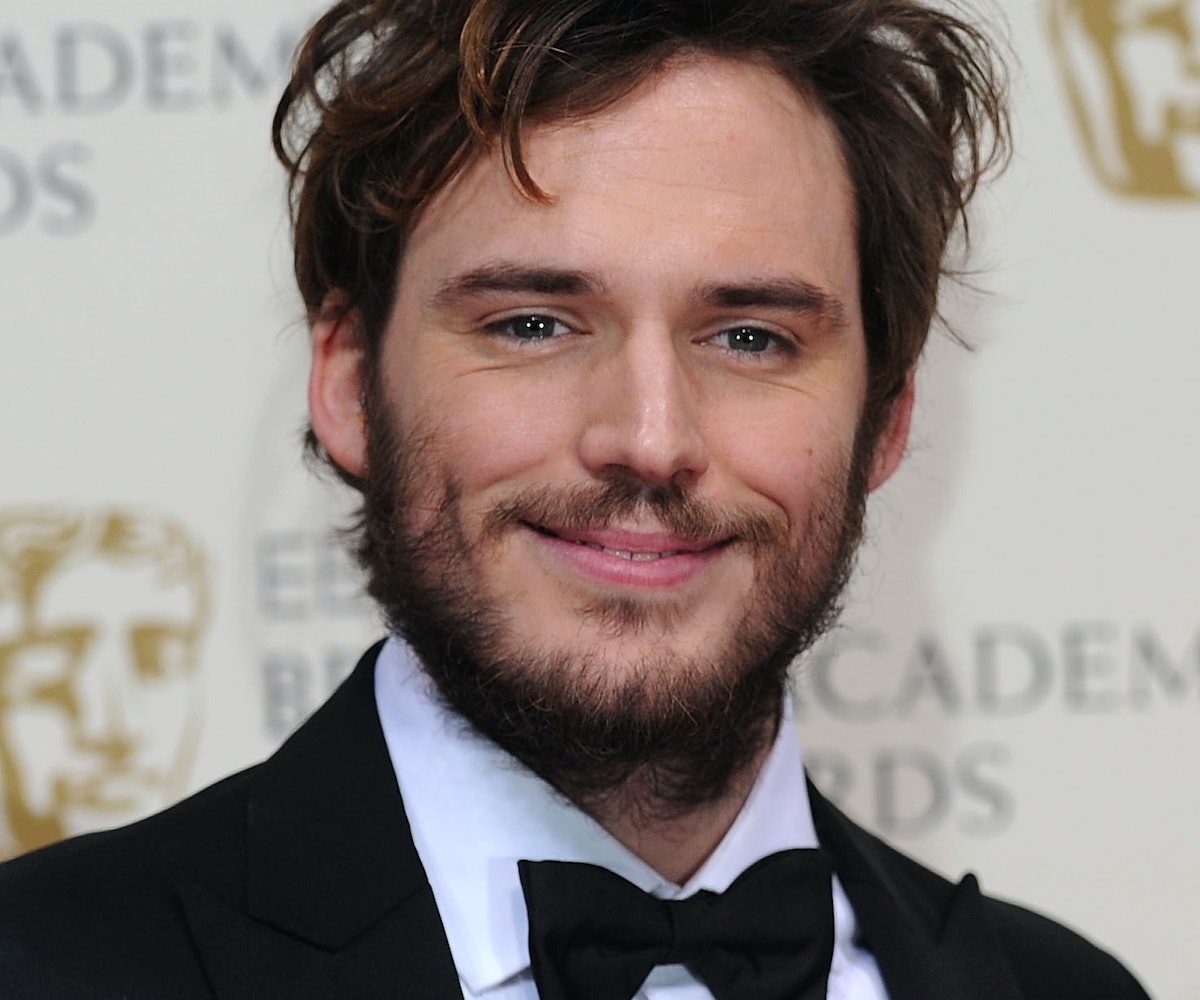 When Sam Claflin was first cast as Finnick Odair in The Hunger Games: Catching Fire, there was national outrage. Die-hard fans of the series descended upon social media to vent their anger, with some making death threats. However, much like he’s done his entire life, Claflin used this as fuel to propel him to new heights, beating the odds with gusto and becoming one of the standouts of the franchise. A natural-born underdog, Claflin was one of three children raised in a middle-class dwelling in Ipswich, England. He learned the value of hard work early on, and has continually channeled this ethic into his career as an actor, earning him roles in blockbusters like Pirates of the Caribbean: On Stranger Tides and Snow White and the Huntsman.

So it was odd seeing someone so humble play someone so deliciously privileged and evil in IFC’s latest flick The Riot Club. A narcissistic Oxford brat intoxicated off his own wealth, Claflin’s character represents everything the actor isn’t: lazy, irresponsible, and loaded with more money than he knows what to do with. Watching Claflin embody this a-hole on screen is a treat, like meeting a character torn from the imaginations of Harold Pinter and Bret Easton Ellis. Even better is the depth Claflin brings to the role as an actor, and his ability to raise important questions surrounding privilege and the nature of power.

As an actor, how did you get into the mindset of this type of cruel, nasty, and privileged person?

I honestly just tried not smiling a lot. During the filming phase, this proved quite a challenge because I got along so well with my costars. There were a lot of jokes, naturally. But I also had to kind of take myself away from that sort of thing and look grim. I think my street-wise experiences growing up allowed me to know a few people who have been through similar things. I guess I base characters off my experiences. Despite the fact he’s got a posh accent, he’s really no different from someone who has no money and isn’t loved by their parents or has continually lived through bad experiences. I think Alistair is someone who’s very unloved and very lonely, but has the money, wealth, and power behind it.

It depends what type of power. That’s a very difficult question. I’ve grown up with no money. My family were pretty much in the lower class more than the upper class. I kind of feel like I’ve managed and I’ve been happy my entire life. I don’t really feel like I’ve wanted for anything because I don’t know what that would be like. You know? At the same time, I’m curious what it would be like to have lots of wealth. But I don’t feel like I’m that powerful either so I’m curious what having that would be like; the ability and strength to do whatever I wanted. I think money can buy you power. I’d probably say wealth because I could look after my family; I wouldn’t need power to do that.

How did you first come on board with The Hunger Games?

It was quite an epic casting process. To my knowledge, they saw other people and it was definitely a long-winded process. After my initial audition, I waited with baited breath for three months without hearing anything. Eventually I was called back and re-auditioned and for whatever reason, they went my way. It’s definitely unexpected, to say the least.

Amazing. The whole experience of filming was truly wondrous; from the very get-go of expecting it to be quite over-the-top and overwhelming, I was immediately welcomed and became part  of the family. Jennifer and everyone welcomed me with open arms. It was a long-winded filming process, but at the same time it felt like it went by so quickly. And then we came back for Mockingjay Part I and II, which we shot back to back. For me, that was different because I was [on set] for a week and then I was away for two weeks and then I’d come back to work for three days and then disappear for four weeks. It was very, very busy. But at the same time we had so much fun on set. We all take our jobs seriously and are professional, but are able to have fun and keep each other entertained. There was never a dull moment.

You’re dealing with these huge Hollywood sets, which are obviously different than something like The Riot Club. What are some differences, not only between indie and Hollywood films, but between English and American films?

(Laughs) That’s such a loaded question. I think the culture, first off, is different. The food on set is very different. The only experience I have working on American sets is the scale of The Hunger Games and Pirates of the Caribbean, which is a hugely overwhelming, but incredible experience. You get treated like royalty and there are so many people on set and so many things going on that you feel like you’re a part of it. At the same time, there are so many people that you feel like a small cog in a very big machine. The truth is, that’s how it is; you are just a small part of something bigger. And then obviously, being in something very intimate, like The Riot Club, it’s much more intimate. Everyone wants to get their hands a little bit dirtier than in big productions. I feel like everyone helps each other out a bit more.

Are the stakes are higher when you have a lead in a smaller project or having a smaller role in a big production?

It depends on the production. For me, entering into that world [The Hunger Games] I knew the second one would be as successful as the first one. At the same time, the part I was playing had a huge amount of pressure on it because I wasn’t right for the part, according to a lot of fans. (Laughs)

How did you go about getting over that hurtle and exceeding their expectations?

It’s a matter of not really thinking too much about it. I didn’t personally make the mistake of casting me—and the fact that these are the people who cast Jennifer Lawrence as Katniss and the fact she received a barrage of insulting feedback when she was cast originally. Half the people did doubt me, but it made me work harder to prove them wrong. I never saw it as a negative; if anything, I turned it into a positive to work harder. I think that’s how I work.

Both The Hunger Games and The Riot Club are very brutal narratives involving and satirizing wealth and the nature of power. Why do you think our public consciousness is so enamored with these themes?

I think it’s quite apparent and a well known fact that 99% of the world’s wealth belongs to 1% of the world’s population. Something ridiculous like that, a statistic that’s so outlandish in my opinion. Most of the world, if not, I’d say 90% of people, don’t have the amount of money these sort of people do. Therefore having an insight into that world itself, behind a closed door, is always going to be quite interesting. For me especially, the world of The Riot Club was a world I wasn’t familiar with and wasn’t aware of. It’s the opposite of my upbringing.

You came from a humble background and still achieved a great deal of success in the film industry. However, there’s currently a debate in the media that most of the actors coming out of Britain are from upper class families. Is this the case?

I can’t deny a lot of the ones on everyone’s radar—like Eddie Redmayne and Benedict Cumberbatch—are from that world. They went to college and are from very well-to-do families. At the same time, Jack O’Connell is a brightening example of someone from the opposite side of the tracks, if you will. There’s a mixture of both. I think the spotlight is being shown on that world purely because Benedict and Eddie were nominated in the same year and they’re from rival, posh schools. I think that’s why the argument and conversation have come up.

These kids in The Riot Club are given too much at too young an age. If you had the money these kid’s fathers had, or even when you’re older and have the money you’ve made throughout your career, how would you raise your children differently?

I’d try to raise my children as close to how I was raised as possible. I feel my wife and I had very similar upbringings. Therefore, I feel the two of us would be able to make an easy compromise in finding how we would bring them up. But I think it’s important for my kids to understand that it’s our money. It’s built from hard work. I’ve been working in full-time employment since I was thirteen. I think hard work and money management is key to growing up and being an adult. I think knowing how the world works is a necessity so I’d never spoil my kids. Of course, what’s great about the comfortable position I’m in now is that I can enjoy myself a lot more without worrying all the time like my parents did. However, I’d hate to think of myself as someone who spoiled a child; I think that’s one of the worst traits in a human being ever. At the same time, I don’t want my kid to want for anything because I spent a lot of my childhood wondering what it would be like if I had this or that.