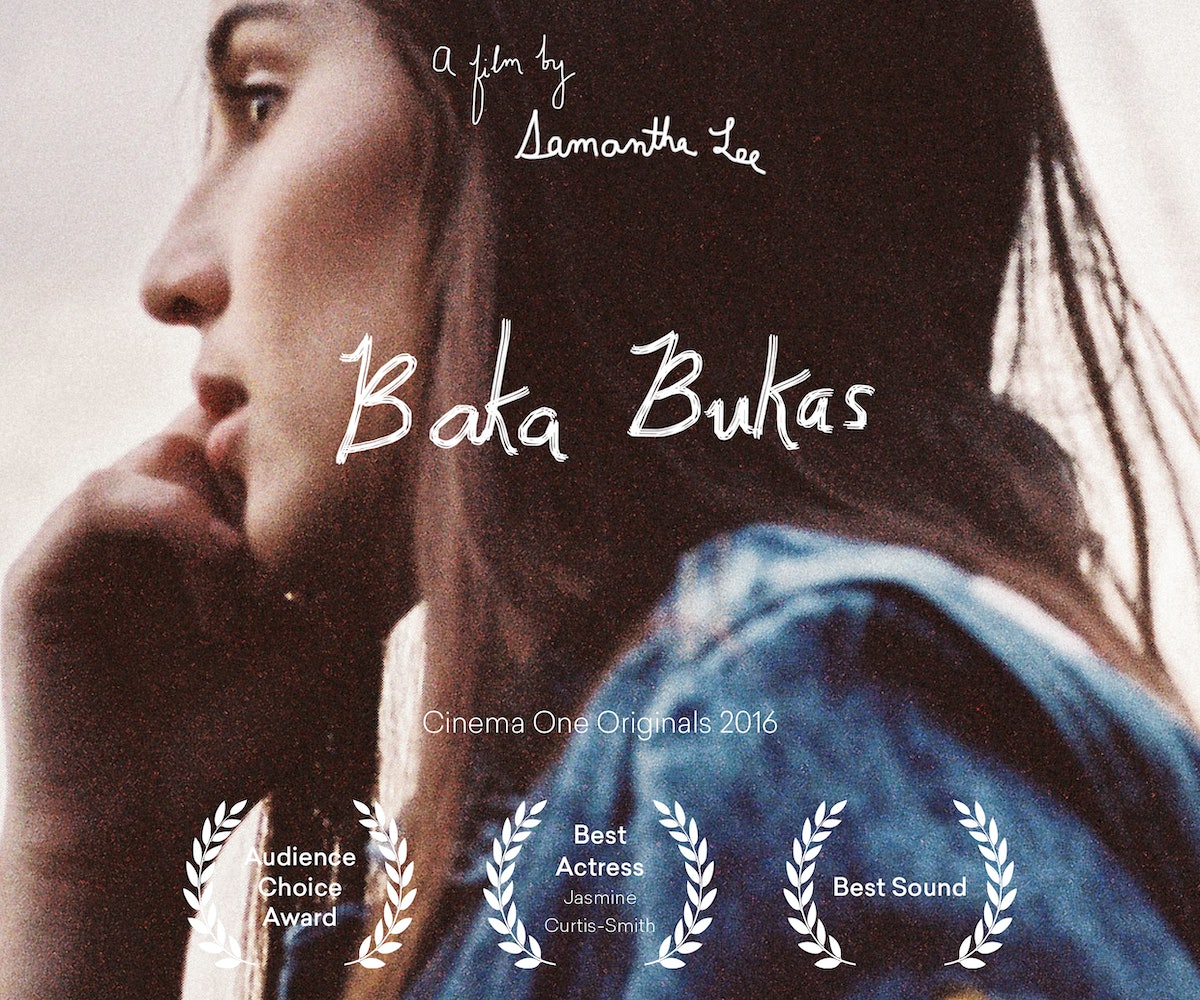 Photo by An and En Estrada (Your Evil Twin)

Although the Philippines is considered the most LGBTQI-friendly Asian country, there is still a major lack of representation in film. But now Manila-native Samantha Lee, despite being a newcomer to the Filipino film circuit, is making even more monumental strides for queer inclusivity in her debut movie, Baka Bukas. The independent film follows 20-something Alex, whose queer identity is known to everyone in her life except for Jess, her childhood best friend. Once Jess finds out, they both must face their feelings for each other. The perfect storm of dreamy visuals, an award-winning soundtrack, and a cast of characters so authentic they feel like your own group of friends, Baka Bukas is an exploration of queerness that Filipino film has never seen before, and the country’s response has been endlessly welcoming.

Lee wrote, co-produced, and directed the film, incorporating small parts of herself and her real-life friends into every character, moment, and location; even the title references a Tennessee Williams quote she’s always loved: “A prayer for the wild at heart kept in cages.”

The movie title translates directly to “maybe tomorrow,” but Lee says, “Depending on how you say it, it could also mean, ‘maybe it’s open.’ It’s a wish, a prayer, that maybe tomorrow things will get better for the LGBTQ community.” We spoke with Lee about her experiences as a queer filmmaker in Manila, what it was like working on a set of mostly women, and what she hopes for the future of Filipino film.

When did you first get into the film industry?

I first got into film when I took it up in university for my undergrad. But before that, I was already putting together little films here and there. I remember in high school, I used to make my friends short films instead of writing them letters.

What was the first film experience you had where you can remember identifying with a character?

The first film character I truly identified with was Max Fischer from Rushmore. I remember watching that film for the first time and realizing it was okay to be who I was because there was someone out there who was just as dense and awkward as me.

What is it about your new film Baka Bukas that filled a need that was missing in contemporary Filipino film?

I just wanted to see a representation of me and my friends on-screen. People always assume that Baka Bukas is about one person, and although they’re kind of right, I also see the film as a love letter to my group of friends.

Growing up, I never saw myself on-screen, and I think that had a big impact on me. It took me a while to come to terms with and to accept that I was a lesbian because there was a lack of examples both in the media and in real life. I wanted to show a different side of what it’s like to be gay in the Philippines. I wanted to make something that would have made a younger me more comfortable with who she was. There’s always been a lack of the LGBTQ representation in Philippine mainstream media, and in the few instances where there was a gay character, they were mostly just accessories or used as punch lines. It has improved over the past few years, especially in independent films, but there’s still room for more improvement for sure.

The plot is a story of friendship and the queer experience in Manila; how much did you draw from your own life and relationships?

I would say that a majority of the film is based on my life—I mean there are certain lines and scenes that were directly lifted from my personal experiences or experiences of my friends. I'm really good friends with the production designer and the stylist of the film, so everything that you see on-screen is something from our world. Some of the things that are in Alex's room are things from my actual room, the bar in the film was made to look exactly like the bar that we go to on weekends, and most of the clothes were borrowed from our friends and local brands and designers that we support.

What other themes did you find important to touch on throughout the film?

I think that aside from being a love story, Baka Bukas is also a film about figuring out and trying to become the person that you want to be. The characters are constantly trying to figure out whether to sacrifice the now's for the later's; it’s about the negotiation that happens between your short-term self and your long-term self.

How did you know Jasmine Curtis-Smith and Louise delos Reyes were the right fit for their respective roles?

I come from a documentary filmmaking background so, in a sense, I didn’t want the girls to be playing a role—I wanted them to bring themselves to the characters they were playing. Neither of them went through an audition process. I just ended up hanging out with them to see if they had bits of their characters in them. I knew Jasmine from a while back; we always had common friends and all these shared experiences so I knew that she could play Alex. With Louise, when I met with her, she had a lot of angst about acting and the show business and I felt like that was a part of her that really connected her with Jess.

Congrats on the film winning the Audience Choice Award at the Cinema One Originals Film Festival! How does it feel to see such a positive response to a film that champions for LGBTQI+ representation in the media?

Honestly, that was the award that I wanted from the very beginning because it was an affirmation of sorts. I mean, the Philippines is a pretty conservative country—we don’t even have divorce! For a film like this to get an award like that proves there is a market for these kinds of stories, and hopefully, it paves the way for more films like these to get made in the future.

You also received the award for Best Sound. How did the soundtrack come together?

There’s this girl named Denise Santos who went to UCLA for film scoring and who works for Hans Zimmer at the moment—it’s kind of a long story—who saved my ass. It was a week before our screening date, and we were having problems with our musical score, so I gave her a call and I said, “Hey, I know you’re busy and you’re far away but my film is showing in seven days and we have nothing.” I ended up sending her the Spotify playlist I was listening to while writing the film and played on set, and she used that as a basis for all the songs in the film.

What was it like working with a crew of mostly women?

It was definitely a lot of fun! I went to university with most of them; we basically grew up together, so there were a lot of inside jokes and Fifth Harmony dance breaks on set. But aside from that, it was just nice for me, as a director, not to have to constantly worry about the male gaze, especially when we were shooting sensitive scenes. I feel like as women artists, we already have that natural inclination to communicate or adapt things in such a tender way which is what I wanted for the film. I wanted the film to feel like that song by Wet called "Weak."

You also released a Baka Bukas zine. Why was it important to you to translate the film to a different medium?

I always knew at the back of my mind there was going to be a zine—even before we got the grant and everything came together. I guess it was because I never wanted to market the film using traditional methods and I knew the zine would speak to the audience that we were trying to go for. I also worked with really great photographers,  Tracianne and Trasienne Estrada, who shoot exclusively on film, so I wanted to make sure that the images got as much exposure as possible.

What did you learn about yourself from making this film?

I really feel like I grew up while making this film. I think one of the most important things I learned, on a personal level, is that I realized that people experience pain in different ways. That everyone’s pain is valid, even if it isn’t on the same level as yours. I mean I wrote Baka Bukas two years after the relationship it was based on ended, and for those two years, I always thought that I was the only one who got hurt from that experience. I guess everyone who goes through a breakup thinks that way. But having to write and develop both characters made me realize that there really is two sides to every story and people just have different ways of dealing with things.

The North American premiere of Baka Bukas will take place this June at the Frameline in San Francisco, with other U.S. dates to be announced.