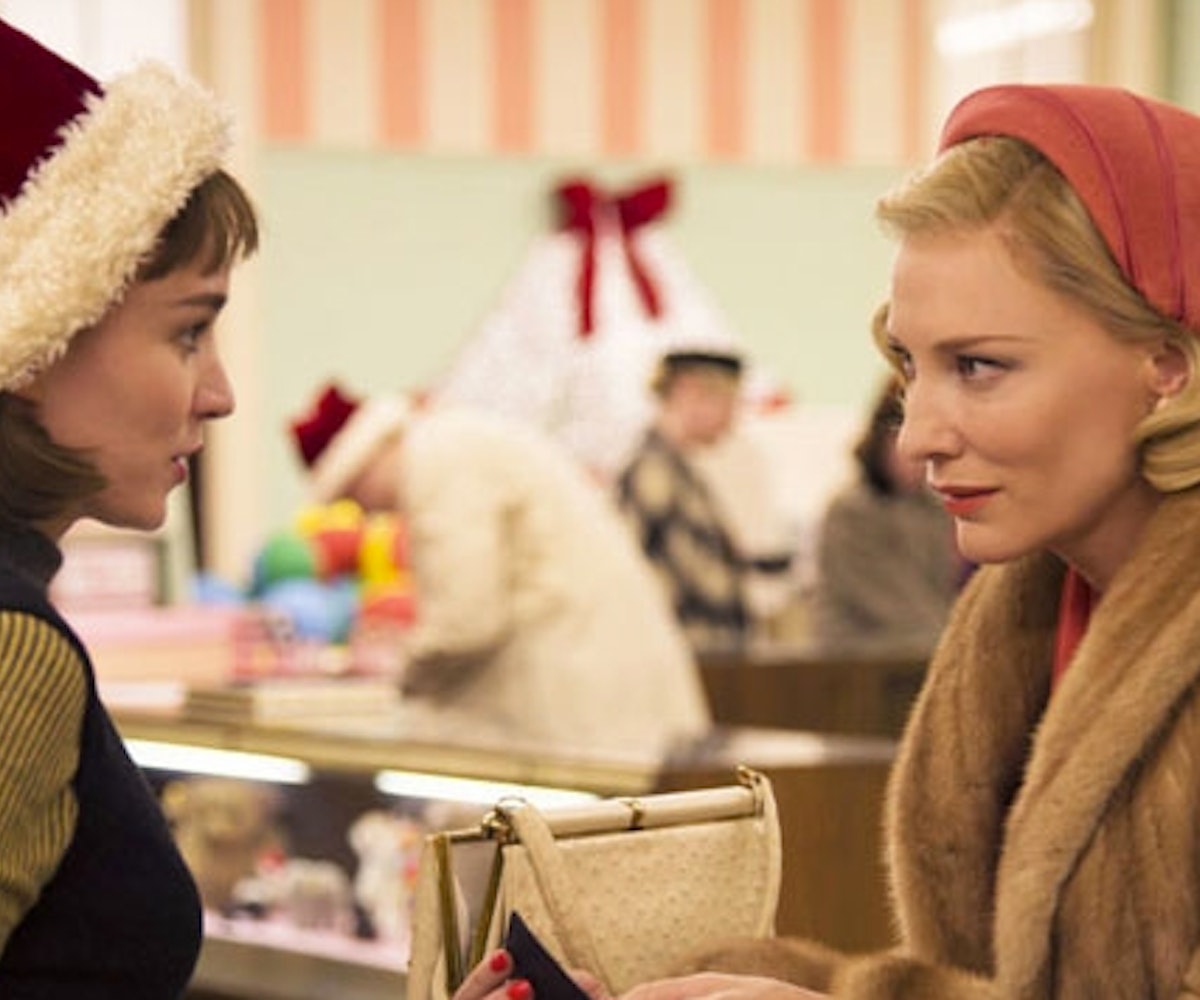 Photo from "Carol" via The Weinstein Company
by Kristin Iversen
Aug. 9, 2016

Watching movies on a plane is one of the best (only good?) parts of air travel. Sure, the variety of films offered is usually pretty limited, but who doesn't want to watch The Intern for the 80th time while drinking cheap white wine? Unlike when you're down on the ground and have a million things to distract you from paying super-close attention to every last movie detail, when you're up in the air, you're a captive audience, and so you tend to pick up on things that maybe would go unnoticed otherwise. Things, like, oh, the fact that all the same-sex kissing scenes from Carol, the critically acclaimed film starring Cate Blanchett and Rooney Mara as lovers, have been edited out. Things like that.

Via Twitter, it came to light last week that Delta was censoring the same-sex kissing scenes in Carol, when comedian Cameron Esposito noticed the erasure of all lesbian kissing, while also observing that other films shown on Delta contained unedited sexual content.

As AfterEllen reports, the edited version of Carol shown on Delta removed all the scenes demonstrating same-sex physical affection, but left in similar scenes portraying heterosexual couples. In an official statement, Delta claims to have no choice over the editing, and explains that they simply chose one of two versions offered by Carol's producers, The Weinstein Company; the edited version Delta selected omitted all same-sex kissing scenes. And while it is certainly true that Delta does not hold editing rights, Carol's screenwriter, Phyllis Nagy, tweeted that at least two other airlines—American and United—have chosen to show the unedited, theatrically released version of the film.

Controversial edits are not a new thing, and are not limited to issues involving sexual identity. However, there is something undeniably disturbing about the fact that kissing between two women is still seen as potentially inappropriate for younger viewers to witness, as if it could be in any way akin to similarly edited scenes of extreme violence or sexuality. The reason behind editing films for flights is that, even in the age of personal seatback screens, there is no such thing as private viewing, and so anything shown should be suited for public consumption. But same-sex affection is suitable for the public at large; any implication that a scene of two women kissing is comparable to the wildly violent acts shown in Tarantino or Coen brothers movies or the sexually explicit scenes in The Wolf of Wall Street is a dangerous one, and risks relegating what should be acceptable to the mainstream—simple, physical declarations of love—to the margins, where it most definitely does not belong.