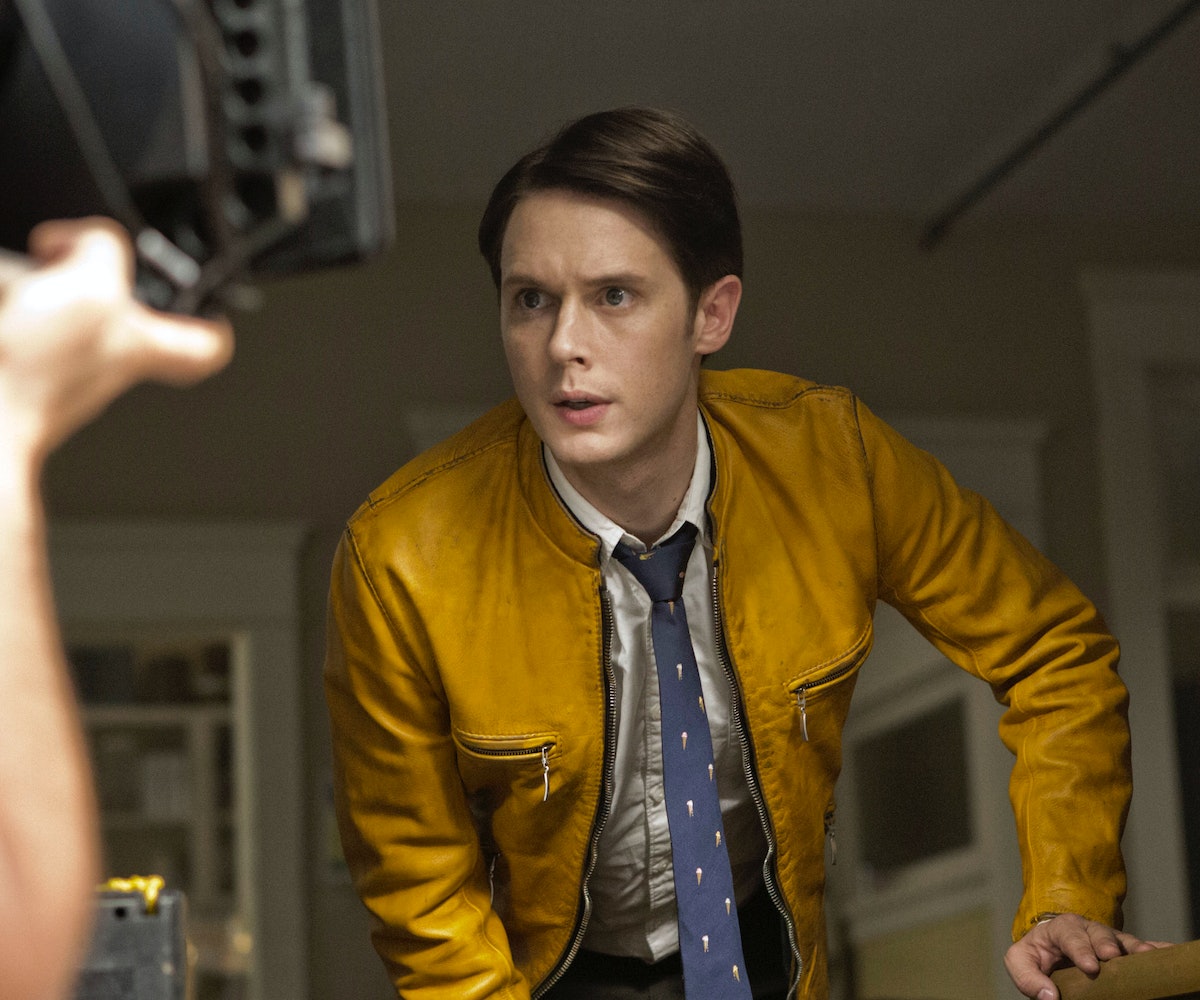 Tonight, the wildly inventive BBC America series Dirk Gently's Holistic Detective Agency will end its inaugural season. The show, which was created by screenwriter Max Landis and based on the Douglas Adams novel of the same name, has already been picked up for a second season. This is good news for fans who have been following the eccentric adventures of the title character, played by British thespian Samuel Barnett, and his reluctant assistant Todd, played by Elijah Wood.

After auditioning countless of actors for the lead role of Dirk Gently, a detective who believes that everything in the universe is connected, Landis began to worry that he had written an unplayable part. It wasn't until Barnett, a 15-year veteran of both the stage and screen, brought his own take on the character that Landis knew he had found his actor. We spoke to Barnett recently about what he saw in the character of Dirk Gently that others might have missed, the tortuous audition process, and how it felt getting the role.

What's it like working with Max Landis? He's a force of nature.

You literally have to stop him from talking because he’s encyclopedic. I remember the first time he sat me down, when I got the job, to tell me about Season One, and I was like, “Slow down. What? I can’t focus.” He holds everything. He has more knowledge of this stuff than anyone I’ve ever met. When I follow his Twitter feed, I’m like, “Where do you get the time in the day to watch all the things you watch?”

Max has said that with Dirk Gently, he was worried that he had written an unplayable character. How did you come up with your own interpretation?

When I got the audition, it was a self-tape back in the U.K. I was given 11 pages worth of script; there were three scenes, but I guess that I didn’t see Dirk as wacky and clownish and like a buffoon. I didn’t see him as quirky. That’s a testament to Max’s writing, it’s all on the page. I immediately saw his loneliness and his vulnerability and his need to connect with people.

Which you get glimpses of in the first few episodes.

He doesn’t recognize social cues and he doesn’t know how to be friends with people. He’s useless. He’s annoying and can be obnoxious. And I saw that as just like, “Well, that’s what you play.” The rest is just bluster. He’s talking because he doesn’t know what else to say.

Did putting yourself on tape benefit you, as opposed to having to audition in front of people?

You’re not in a room so you don’t get any immediate feedback. I learned the script word for word because it is brilliant. I was like, “This is one of the best things I’ve read in ages so I’m really gonna try.” There was a rhythm to the writing, there was a timing to it, a comedy to it, and I thought it’s the kind of writing where if you miss an “um” or an “eh” or a “but” or an “and” it ruins the rhythm, so I just tried to nail that side of it and tried to play it truthfully.

What was the rest of the audition process like?

I found the process torturous. I landed in L.A. and I was meant to do one screen test, be there for two days, and fly home. I ended up being there for two weeks because they kept bringing me back. And of course, each time they bring you back, you go, “This is really painful now,” because you’re closer and you want it more. And it’s easier to not want it when you feel like you’re not in the running. In the end I knew it was between me and one other guy. We both had a screen test with Elijah and I was sitting outside the room where they were auditioning together listening to the other guy. He was really good. And also, he’s more well known than me and I just kind of thought he’s the one. Why wouldn’t they have him? Then I had to do my audition. I went into it like, “This isn’t gonna work.” The one thing I will say is that I felt that Elijah and I immediately had good chemistry and I wasn’t sure if I was making that up or if that was legit. But turns out it was legit.

How long after that screen test did you get the part?

Five torturous days. It was three in the morning. I knew I was going to find out that night, but with the time difference I was like, “I have to go to sleep.” I turned off the light and I just put my phone on silent. I was like, “I’m gonna accept that I’m not going to know tonight.” I put my phone down so I couldn’t look at it and I closed my eyes and I thought, “I’m gonna look at my phone.” I picked it up and it was ringing. I answered it and it was my agent and he was like, “Is that Dirk Gently?” And I was like, “No! No fucking way!”

Do you go back to sleep after you get that call?

No. I’m like, ringing anyone and nobody’s awake. I was there with my partner going, “Wake up! It’s good news!” It was one of those amazing moments just because I’m not young in this industry.

But I’m not. I’m 36, I’ve been acting for 15 years professionally, and amateur stuff before that since I was six. It’s great that this has happened now. I think I’m sort of ready right now. I don’t think I was ready for something like this before. It’s come at the right time, but it is weird.

Dirk Gently's Holistic Detective Agency will be available on Netflix December 12, and is available to steam at BBC America.