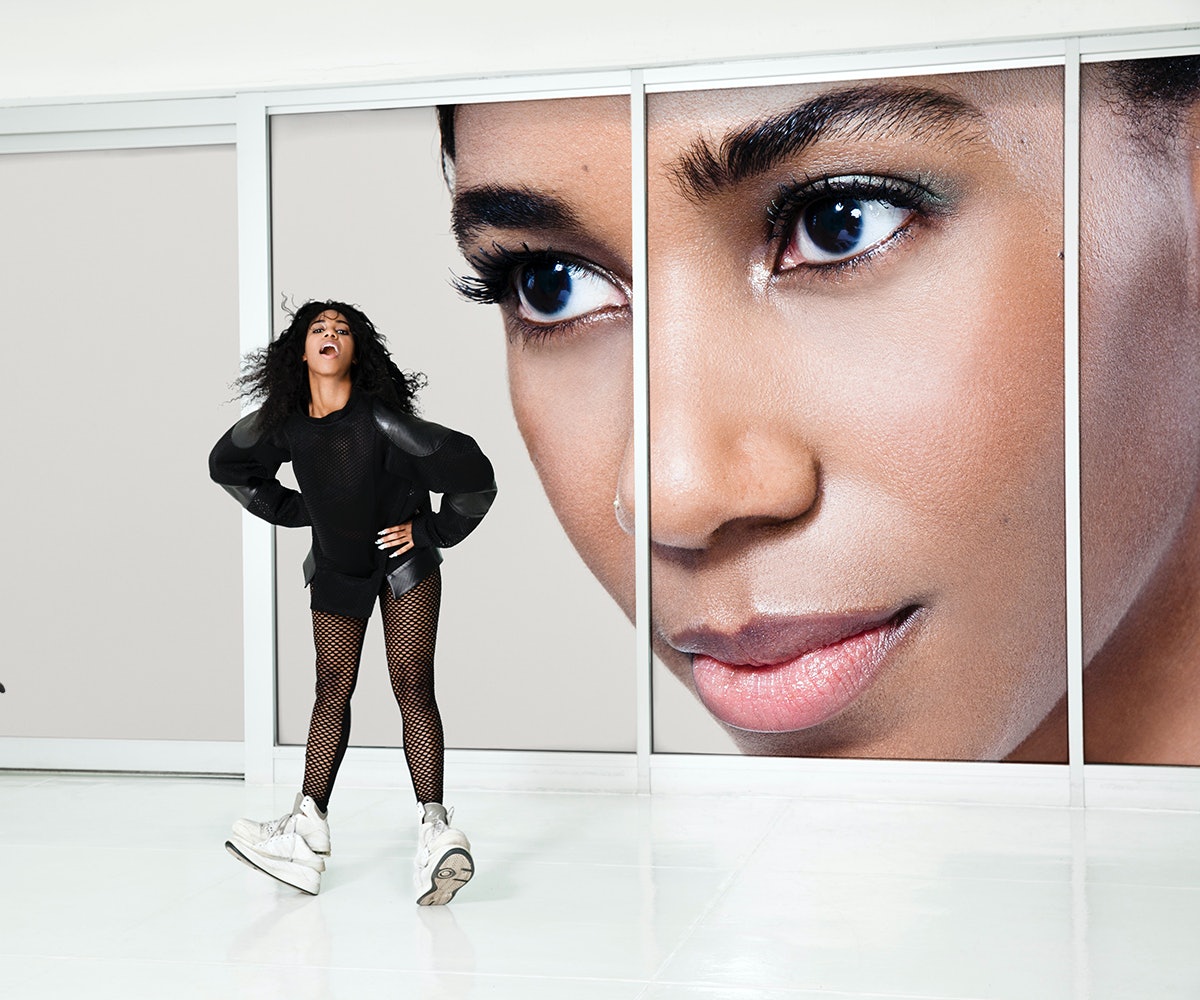 Now more than ever, it's important for people in the spotlight to speak up about social issues. Santigold has been doing so through her music since she first broke out on the scene as a solo artist in 2007. Her most recently released album 99¢ touched on hyper-consumerism and further explored ways in which society is manipulated by capitalism and commercialism.

Santigold is set to play an even bigger role as an artist by using her platform to reach even more people across the globe with a brand-new social campaign. In collaboration with Absolut, the artist is pushing for an interactive movement to "refresh the talk" and promote diversity and inclusivity starting at the Grammy Awards.

In another effort to practice what she preaches, Santigold will literally be wearing messages on the carpet. Cute Circuit designed a couture clutch that has LED lights to display customized words, images, and animations spreading messages of women's empowerment.

We hopped on the phone to chat with Santigold about the #RefreshTheTalk campaign and the issues that are closest to her heart. Read all about it in the interview, below.

Could you tell me more about the Refresh The Talk campaign and why you wanted to get involved with it?

"I was approached about being part of the campaign and the first thing they explained right off the bat was the idea to create a forum to talk about social issues on the red carpet which I felt was amazing, especially since there has been so much talk in the recent past that women specifically complain about the lack of opportunities to say things of interest or relevance on the red carpet. It's always about their clothing or stuff like that, and women felt like men were getting asked about more tangible things on the red carpet. I just thought this was a really interesting thing given that history. In light of everything going on in the world, it obviously puts a whole different importance on it, so I was interested right away."

What have been some of the most important social issues to you personally?

"Oh my gosh, I don't know where to start. Women's issues, women's rights, environmental issues... There's so many things, I'm just trying to get my head around what to even comment on. Honestly one of the biggest issues right now too is how split our nation is. I think that's a huge issue, [and] I think we need to sort of band together a little bit more. [There's] the ban of immigrants and there's so many refugees... I'm not even prepared to go through everything. There's so much and then also just saying it in a correct way right off my heart is a lot."

How do you feel about being placed in a position where people expect you to be responsible for using your platform to inform the public about issues? It's a double-edged sword where celebrities get backlash if they do and if they don't speak up.

"I grew up in the era where people spoke up all the time, especially musicians. Even when I didn't grow up in that era, I think I did 'cause I was listening to all that music and watching all that stuff—everything from the '60s and all the topical folk music. In the '90s, rap was so socially reparative whether about self destruction, 'don't do violence to each other' or 'crack is a problem,' or even Marvin Gaye and Bob Dylan. Music has always been an amazing platform for the social page. It kind of died down and a lot of people don't talk about much in their songs, and a lot of celebrities are afraid because now there's so much social media influence and immediate access sort of in your face and a backlash that can be directed to you and it freezes people up.

"I think that we're in a time and era where we can't afford to not speak out at all. I think that people are really realizing that—everyone is realizing that they need to speak out, but celebrities also have a special opportunity to reach so many people who are fans and who are paying attention. It's really interesting, which is part of why I was drawn to this campaign or this work. What you saw during the Super Bowl or even the awards ceremonies where people are winning and they're using their platform to speak on important issues, I think it's indicative of where we are and how dire our circumstances are and how everyone's realizing that we need to speak up. We need to—our voices need to be heard about these issues 'cause they're important and our future is on the line."