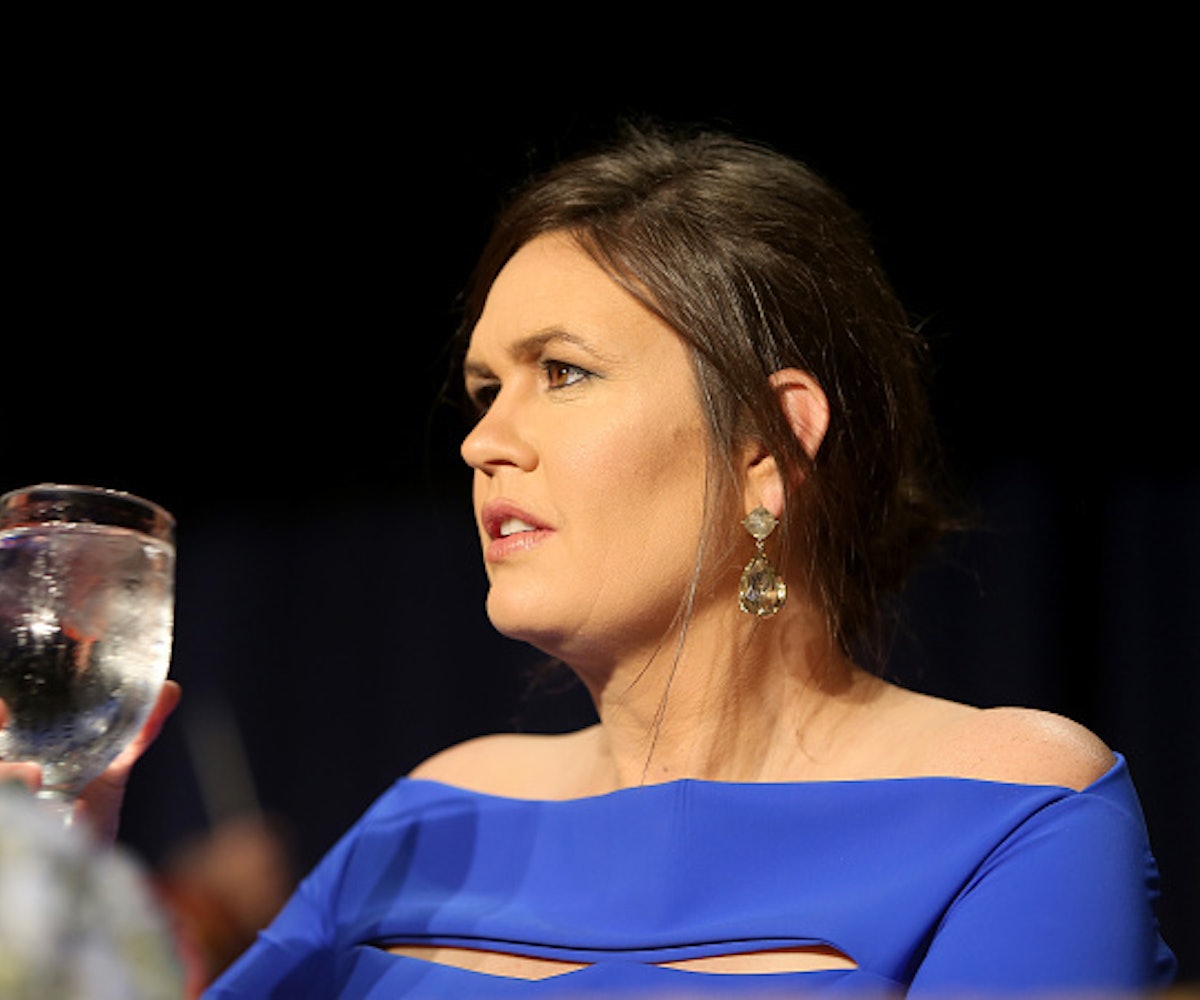 At Saturday night's White House Correspondents' Association dinner, comedian Michelle Wolf delivered what was decidedly one of the funniest, most cutting roasts of the Washington establishment in some time. Nobody was safe, and everyone from NBC morning show host Megyn Kelly ("Megyn Kelly got paid 23 million dollars by NBC, then NBC didn’t let Megyn go to the Winter Olympics. Why not? She’s so white, cold, and expensive, she might as well be the Winter Olympics") to Senate Majority Leader Mitch McConnell (“Mitch McConnell isn’t here tonight, he had a prior engagement. He’s finally getting his neck circumcised. Mazel”) were mocked.

But despite the presence of some spot-on Donald Trump barbs ("Mr. President, I don’t think you’re very rich. I think you might be rich in Idaho, but in New York you’re doing fine"), the jokes that still have people in an uproar two days after the dinner (which is the equivalent of approximately a billion years in our current lightning fast news cycle), were not those about the president (who didn't attend the dinner because he can't take a joke), but rather the ones Wolf made about White House Press Secretary Sarah Huckabee Sanders.

Carrying on in the fine tradition of Stephen Colbert, whose turn at the White House Correspondents' Association dinner in 2006 featured the merciless roasting of then-President George W. Bush—who was sitting right there on the dais—Wolf delivered her jokes about Sanders while the press secretary sat just a few feet away, cracking not a single smile. Wolf was both topical in her jokes, telling Sanders, "I loved you as Aunt Lydia in The Handmaid’s Tale," and historical, musing, "I’m never really sure what to call Sarah Huckabee Sanders. Is it Sarah Sanders, Sarah Huckabee Sanders. Is it Cousin Huckabee? Is it Auntie Huckabee Sanders? Like, what’s Uncle Tom but for white women who disappoint other white women? Oh, I know, Aunt Coulter."

But it was a joke that Wolf made about Sanders' propensity for lying that has caused a lot of discussion in its aftermath. Wolf said, "I actually really like Sarah. I think she’s very resourceful. She burns facts, and then she uses the ash to create a perfect smoky eye. Maybe she’s born with it, maybe it’s lies. It’s probably lies."

Almost immediately, high-ranking members of the media, from The New York Times' Maggie Haberman to Morning Joe's Mika Brzezinski and NBC's Andrea Mitchell, fired off tweets castigating Wolf for attacking Sanders, specifically her appearance. Brzezinski even cited Sanders' role as a "wife and mother" as evidence that she should be shielded from such ad hominem attacks.

And while, okay, sure, we totally agree that it is a bad thing to critique any woman or man for their looks (bad, and lazy!), the thing is... that isn't what Wolf did. In fact, if anything, Wolf complimented Sanders, not only by generously assessing the press secretary's often used smoky eye as being "perfect," but, also, by comparing her to Ann Dowd, who plays Aunt Lydia, who is a total goddess of a woman.

Wolf responded to Haberman and Brzezinski directly on Twitter, pointing out that anyone who thought that her jokes were at the expense of Sanders' appearance was probably just projecting their own thoughts about Sanders onto Wolf's routine.

It's definitely been odd watching theoretically neutral (or even left-leaning, according to Trump and his ilk) journalists join right-wing operatives in the rush to defend Sanders from the same level of mockery to which dozens of other political and media figures were subjected to at the Correspondents' Dinner. Why defend Sanders of all people? Is it because the attacks were (erroneously) assumed to be about her looks? Why, then, not defend McConnell, whose skin-forward neck was compared to an uncut penis?

The answer seems to lie in Brzezinski's tweet, in which she employs the "wife and mother" defense of Sanders, as if those roles of traditional femininity make Sanders immune from any attack on her character, as if mothers don't lie all the damned time, as if they're sanctified people simply because they have kids. This is absurd, of course. Being a "wife and mother" is not shorthand for being a decent person, or being in any way an admirable actor. And make no mistake about it, what Wolf was doing was attacking Sanders' character, not her looks. And rightfully so! Sarah Huckabee Sanders is a blatant liar who has lied about everything, from making claims that Former President Barack Obama ordered Trump's wire-tapping to positing that Trump has never advocated violence toward his enemies to almost definitely making up the existence of a letter from a nine-year-old Trump fan (sample line: "My name is Dylan, but everybody calls me Pickle").

So if Sanders is a liar, why can't Wolf call her one? Or, rather, why did it make journalists so uncomfortable when Wolf did just that? The answer lies partially in the fact that, were the media to agree that Sanders was a liar, they would be admitting their own complicity in cooperating in Sanders' press conference charades, and their complicity in cooperating in any way with an administration that shows little more than contempt for the media, knowing that the media is dependent on access, and will thus ignore insult after insult, all in the hopes of getting that coveted Trump-insider phone call.

It's a grotesque cycle and one that is interesting in how neatly it's usually kept covered. Since Trump has taken office, the accepted narrative is that the media-at-large is perpetually at odds with the White House, and yet what this incident demonstrates is how untrue that is, how utterly dependent many of our most prominent journalists are on staying in this administration's good graces. So dependent, in fact, that they will fabricate insults and endorse total bullshit lest they risk not getting called on at the next press conference led by Sanders. Long after Wolf's jokes fade from memory, this should be the image that sticks around: the rapidity with which establishment journalists rushed to defend a woman who openly scorns them, who has lied to their faces, and can now privately laugh at how easy it is to manipulate the people who are supposed to be relaying the truth to the public. It's a dismaying scene, and one that no amount of smoky eyeshadow can fully obfuscate.