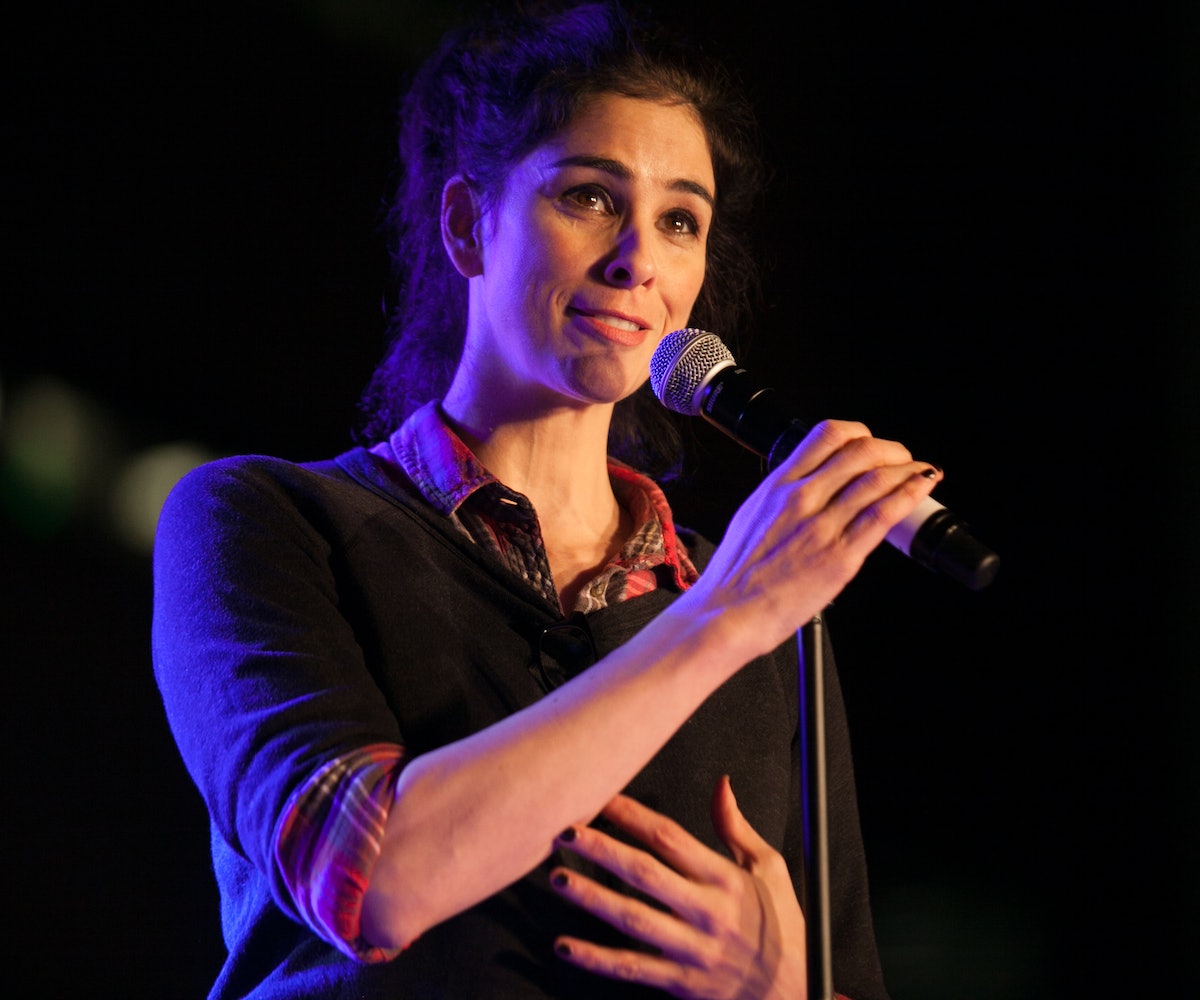 In her new Netflix special, A Speck of Dust, Sarah Silverman opens with a mock apology for the metal detectors at the show, a necessary measure for a woman who has regularly received death threats via social media since election day. But she hasn’t let the troubling tidal shifts in American culture (or a recent health scare necessitating some intensive surgery) dull her edge in the slightest. Silverman unapologetically embraces the louder, brasher, and more daring parts of her comic sensibility in this new hour. In one virtuoso moment, she turns what sounds like a harrowing account of rape into the single most cathartic poop joke of all time. Silverman—who, it bears mentioning, is no slouch on the basketball court—makes the pivot without missing a beat. On the first warm afternoon of a new Manhattan spring, the sweet-voiced and foul-mouthed Silverman sat down with us to discuss the unifying powers of bathroom humor, her new TV obsession, and the slurs that get thrown around on Twitter.

How have the interviews gone today?

It’s good, all I’ve been talking about is The Handmaid’s Tale. I love it.

It’s a kind of hard show to really love because it’s just so brutally difficult to watch. A friend told me she thinks it even gets into exploitative territory.

She’s totally wrong! I mean, it’s subjective. I think it’s a huge, vital, crucial warning that mirrors what’s happening right now. Wildly prophetic. It isn’t like the rape on SVU—which I also love, by the way. I can’t fall asleep without the mellow sounds of soft-core murder and rape on Law and Order. It’s absolutely not that, though; it’s brilliant. It’s inspiring, daunting, a horror movie of the most intelligent kind, in my not-very-humble opinion. It’s creepy that their flashbacks are our present, too. Today, we go, “Oh my god, they’re keeping Muslims from coming in the country, that’s fucking crazy. I’ll have a latte frappuccino, please!” Life doesn’t stop! There’s no scary music happening to accompany people’s rights being taken away every day.

And then here we are in a hotel room, so removed from it all. It’s hard not to feel guilty.

At my lowest, downward-spiral moments, I get very overwhelmed by suffering. The thought of children being hungry, people being cold, elderly people being alone, genocides. I’ll wallow about it. I’ve been leaning into wallowing lately, though, and I’ve found you come out the other side faster that way. I try to be an active citizen, to the dismay of many and the pleasure of some. But sometimes you just gotta change the news channel and put on a Bones. A well-done procedural, that’s part of survival.

Comedy has become a more hot-button profession, especially for a woman, doubly so for a Jewish woman.

Have you noticed an uptick of that in recent months?

More in the last couple years, for sure. But I’ve always had it. You can look at my Twitter mentions and find such classics as, “Hitler was right,” “You should burn in an oven,” “Fucking whore cunt Jew kike,” blah blah blah. I got to a couple points of physically trembling from being scared, but what am I supposed to do? Stop? Is that supposed to work? So I just stopped looking at it, and it’s like it didn’t happen.

I got called a “Jew cuck” on Twitter the other day, that’s a fun one.

Oh yeah, that’s getting big. Love that one!

At a couple of points in the new special, you stop the flow of the act to deconstruct a joke and actually get new jokes out of that. At this point in your career, have the nuts and bolts of stand-up comedy become a subject of interest for stand-up comedy?

I used to be like, “Don’t do the deconstructive thing, that ruins it.” But yeah, it really is a subject of interest for me. I kinda wondered if that would be interesting to other people. If not, I can cut it out, or just accept that they won’t like that part. But I like understanding the jargon of different jobs, learning how it works. It’s fun to include other people in that, because jargon, in general, is elitist, by design. This brings you inside that.

I told my mother that we’d be talking, and she wanted me to ask why there are so many jokes about poop in your act.

Shitting is intrinsically humiliating, and it’s the universal language. It brings all sorts of people together, from all different parts of the world. People who hate each other’s guts, even. But when you start telling an embarrassing poop story, you realize that ultimately, we’re all the same. We care about our families, we want to feel love, and we all have humiliating stories that involve shitting. That, to me, is unity. Plus, the things that embarrass me most, I feel almost a compulsive need to put forth. So there you have it, Janis, or whatever your mom’s name is.

Work is work, current events are stressful, so how do you keep yourself from going up a wall?

It’s a boring answer, but, TV. TV is my world. Handmaid’s Tale is my everything right now, but I’m also watching The Americans and The Leftovers.

It’s funny, I wonder if other comics feel this way, but I find watching comedy stressful. I love it, I want to stay current, I support my friends, but if I’m gonna relax, comedy is not relaxing to me. Because I’m thinking, “Ooh, the structure of that is wrong,” or “I wish I wrote that!” I can really get into watching dramas, thrillers, Game of Thrones, Walking Dead, all that stuff.

You’re excited for the return of Twin Peaks, then?

I am. My boyfriend can’t even handle how excited he is. I wasn’t a superfan when it was out, but he’s been obsessed. I know that it’s a sensation, though, and I’ve been loving the ads for it.

"School of Rock" is on Broadway now, in musical form. Have you looked into it? I feel like you should be able to score free tickets.

I haven’t seen it! Nobody gets free tickets on Broadway! Is there a, uh, whatever my character’s name was in the play? Is she in there? Oh god, wait, what was my name?

Do you think back on that production much? Do you get wistful for stuff you’ve worked on in the past?

Yeah, kinda. I loved working on The Larry Sanders Show, being a part of Mr. Show, being on Seinfeld. I got the chance to do a lot of cult shows, I’d say even Star Trek: Voyager qualifies. I like getting the chance to dip my toe in a lot of little things.

I’d say your show, The Sarah Silverman Program, has taken on the same stature as the series you named in the years since its cancellation.

Oh, that should have been my original answer, definitely. I was working with my best friends, and the people who weren’t already my friends became my friends. We’re all still very close. The writers’ room was just tears and belly laughs every day. It was the best. When we see each other, we’re like, “Is that going to be the happiest time of our lives? Is it not still in front of us?”