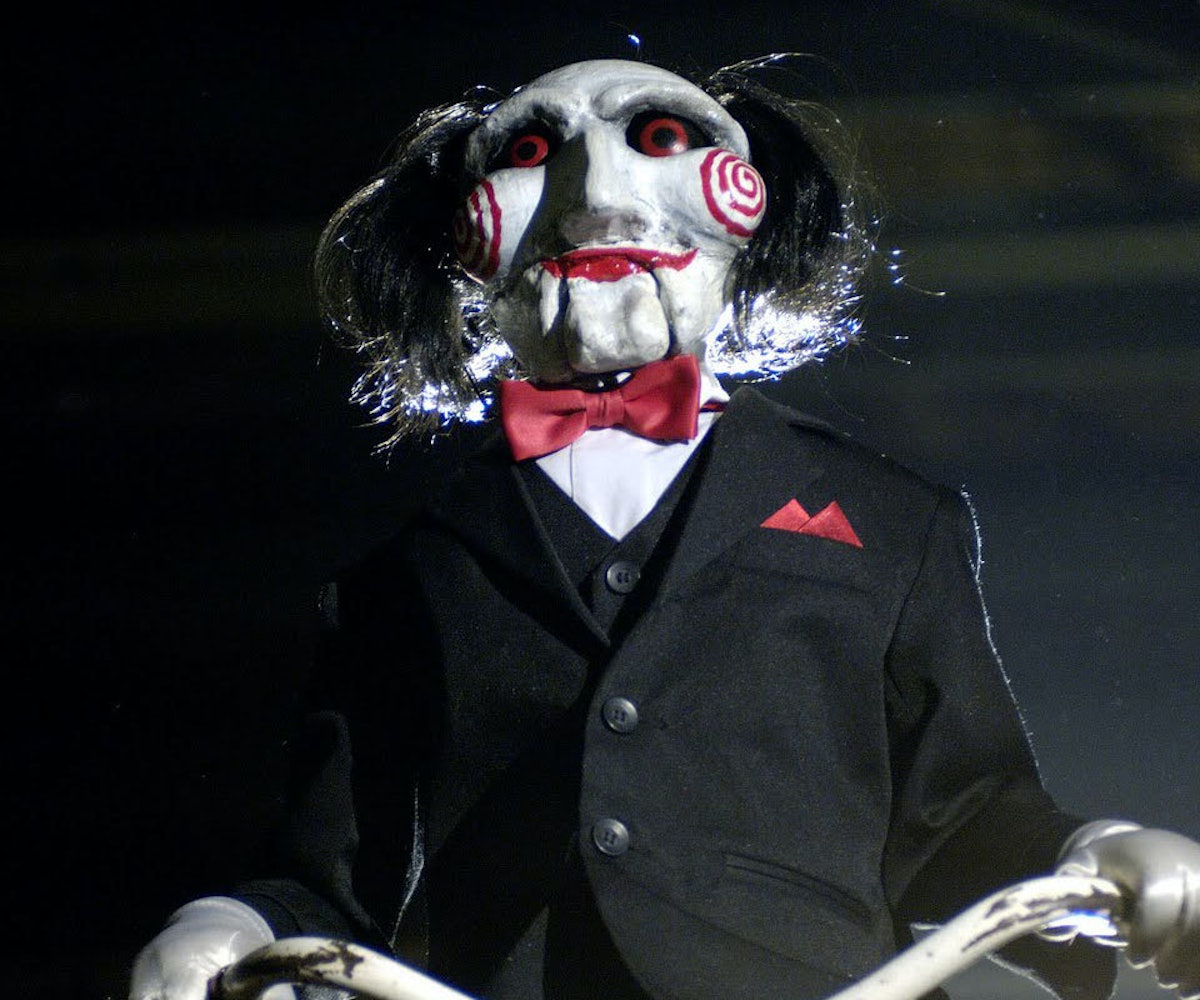 The first Saw movie literally shook me. Never had a scary film—hell, any film—left me actually trembling in my seat. I was a young teen at the time and not yet desensitized to gruesome things, so the images of torture and gore, as well as the film's psychological horror, were all too real. The following second and third installments failed to elicit the same feeling, though, and I soon gave up on the series. (Maybe desensitization had finally set in.) Now, 13 years later, Hollywood is still releasing Saw movies with this weekend's Jigsaw as its latest bloodfest. Why?

Well, the easy answer is because the franchise still makes bank. The original film cost around $1 million to make and raked in over $100 million at the box office; each installment after that did pretty much the same. In marketing speak, the return on investment is high. There's a formula, and it works. Welcome to Hollywood. But why continue to make them if the quality of the films and their respective reviews pale in comparison to the original? It's obvious people are buying tickets, but why are they doing so? What about torture horror gets people's juices flowing?

Escape. Moviegoers are looking for an escape, and sometimes that involves something heavier than a film about wizards, dragons, and magical spells. "Some people need more of something that really shocks the mind and takes them away from their own reality," Dr. John Mayer, a clinical psychologist and horror screenwriter, says. "These people may have a strong-willed character in the sense that they worry too much or have a more difficult time being taken away from their everyday stress and problems." But watching someone saw themselves apart, is that vehicle for release? It all comes down to pleasure and brain stimuli.

"What happens when you watch films like this is the part of the brain called the amygdala gets stimulated," Dr. Mayer says. "It's a small part of the brain, but it plays a major role in our emotions because it secretes enzymes that then stimulate the brain's frontal cortex, the place where our emotions and judgment are housed. You quite literally analyze what's happening on the screen, and your brain gauges how much of a threat it is: the fight or flight response."

The whole "it's just a movie" way of thinking depends on how real your brain perceives the movie to be. Sometimes, like with films such as Cannibal Holocaust where audiences walked out or even fainted, the violence may be seen as too real. (Spoiler: It actually was for that particular movie.) Other times, the violence is comical, and the threat is lessened. (The new IT is a prime example.) Dr. Mayer adds that the threat also decreases with the more gore you consume. You train your brain to see what's on screen as just that—something that's happening on screen, a fantasy that's not harming you in any tangible way. The shock factor diminishes.

When you watch a movie, you're watching a director's vision and imagination. Dr. Mayer calls it an easy escape whereas reading requires you to imagine the horror in your own head, which can oftentimes be more gruesome than what happens on film. "For most of us, murder and the lot fascinates us because those acts are so far beyond our comprehension," Dr. Mayer adds. "Horror films do to our brains what cabinet of curiosities, freak shows, and aliens do to our brains: They trigger that pleasure center and evoke some sense of wonder, as morbid as that may be."

Saw as something wondrous? Now that's a real shocker.