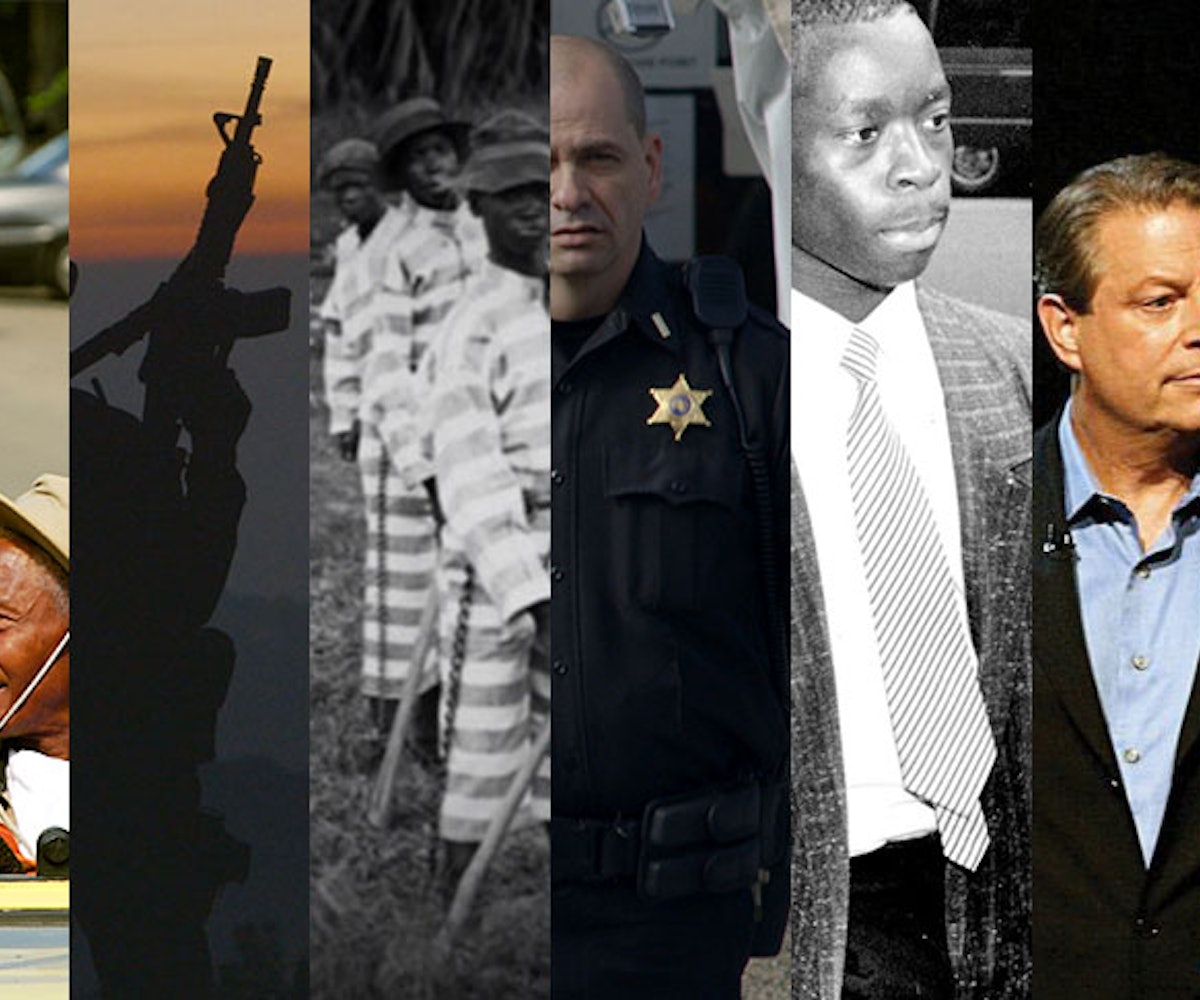 Given that it's almost Halloween, the obvious movies to watch this time of year involve masked murderers and pissed off ghosts. But if you’re being honest with yourself, that blood is fake, and those knives are made of plastic. As soon as that head gets impaled, the director yells “cut” and they go again. Scary movies aren’t actually scary because they’re just that: movies. What’s scary is the horrible injustices, crimes, and tragedies happening all around us, all the time. As the following nine documentaries prove, the world can be a very frightening place.

We all know that global warming is real and that our planet is fucked without some heavy soul searching and extreme measures to follow that up, but this grave threat has never been crystallized with as much clarity as in Al Gore’s haunting and essential 2006 Oscar-winning documentary. The sobering and very scary film posits that we have 10 years to turn it all around if we want to avoid the unimaginable natural catastrophes that come with the rising temperature of the Earth’s atmosphere. That was in 2006. It is now 2016. The jury is still out on whether last year’s Paris Agreement is the turning point Gore was talking about, so you have every right to be concerned.

Earlier this month, Donald Trump solidified his reputation as a heartless racist when he insisted to CNN that the five men accused of raping a jogger in Central Park in 1989 were guilty of the crime. For the record, those men were exonerated through DNA evidence after spending more than a decade behind bars. Back then, Trump took out full-page newspaper ads in all four of New York’s dailies that read, “Muggers and murderers should be forced to suffer and, when they kill, they should be executed for their crimes.” The entire saga (minus Trump’s vile comments to CNN) is bracingly covered in this infuriating documentary, a stark reminder that when it comes to racial progress, we still have a long way to go.

Don’t be deceived by this chilling documentary’s sunny title. Happy Valley is a disturbing examination of fanaticism, hero worship, and mob mentality as seen through the filter of the Penn State child abuse scandal that brought down legendary football coach Joe Paterno. Watch as people in positions of power turn a blind eye in the face of some of the most horrific crimes imaginable (in this case, assistant coach Jerry Sandusky’s serial molestation of minors), in order to protect, well, themselves.

Ava DuVernay shatters the myth of racial progress in the United States with this dissection of the country’s 13th Amendment to the Constitution, which reads, "Neither slavery nor involuntary servitude, except as a punishment for crime whereof the party shall have been duly convicted, shall exist within the United States." Based on that sentence alone, DuVernay is able to construct a legitimate argument that through its mass incarceration of mostly black men, the U.S. still practices slavery. We’ll give you some time to let that sink in.

There are few things more viscerally terrifying than armed conflict, and the one depicted in this immersive documentary is happening right at our doorstep. Filmmaker Matthew Heineman embeds himself with two vigilante groups—one in Mexico and one in Arizona—who take the law into their own hands by going up against ruthless drug cartels. The access Heineman gets is more hair-raising than the best Hollywood thriller.

The Act of Killing

Joshua Oppenheimer’s landmark documentary about the Indonesian genocide blew minds when it opened in 2013, for the simple fact that no one had ever seen anything quite like it. Oppenheimer tracks down some of the perpetrators behind the mass executions of accused communists that began in 1965 (and claimed approximately 2.5 million lives) and has them reenact their barbaric crimes, using costumes and special effects. These men, in their old age, don’t deny their crimes, but on the contrary, seem proud of them. This is a terrifying look at the darkest side of human nature.

The impact of this deeply disturbing and heartbreaking documentary was profound. An exposé in the truest sense of the word, the revelations in this movie about the treatment of killer whales in captivity was essentially responsible for a steep decline in attendance at SeaWorld, the main target of the film’s ire. It’s a testament to how damaging and devastating this film is.

In the age of Obama, we expect our government to play by the rules. But as this scathing and dread-inducing investigative documentary shows, that would just be naive. Here, reporter Jeremy Scahill shines a light on the shadowy Joint Special Operations Command, which essentially has a license to kill anyone, anywhere, as long as it falls under the wide umbrella of the War on Terror (whatever that means). As Dirty Wars horrifyingly illustrates, this includes women and children, a harsh reality that often gets scrubbed out in the press. Essential viewing.

The scariest thing about this documentary is that it shows you, in clear and unrelenting terms, that even if you actively try and avoid junk food and eat healthy, it may not be enough. That is how broken and corrupt the American food industry is, and Food Inc. does not shy away from hammering that point home until you’re literally sick to your stomach.