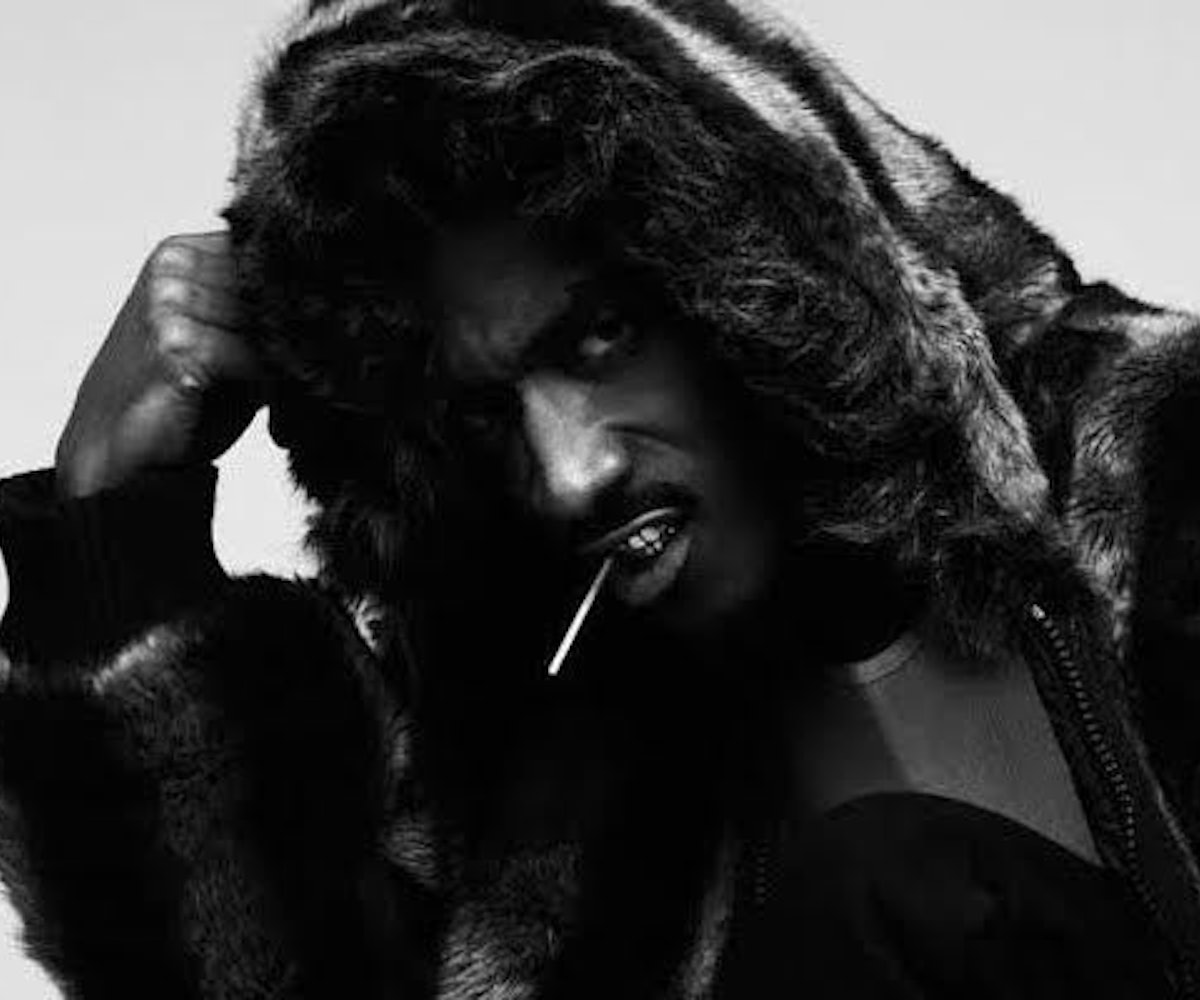 So, after viewing just about every damn video on the internet, I’ve come to one conclusion: I’m down to watch anything Sean Bankhead-related. Arguably the best choreographer and director working in dance right now, Bankhead choreographed his first music video at 17, for Cheri Dennis’ “Portrait of Love.” Now, at 29, he’s working with the likes of Beyoncé, Missy Elliott, and Migos. He also choreographs every dance and performance on FOX’s musical drama series, Star. However, Bankhead is not limited to choreography—he recently launched a self-named clothing line, and each piece is embellished with his own signature.

Ahead, we chat with Bankhead about his journey in the industry, the process behind his choreography, and what he’s up to now.

You got started on YouTube in 2006. Can you remember your first video that went viral?

Yeah, there's a couple. I was kinda on the first wave of poppin' YouTube dancers, and the first video I ever uploaded was with this girl. She was a young kid named Diamond, and we danced to Gwen Stefani's "Wind it Up," and it just went crazy. It was the first video I ever posted, and it got millions of views within like a week. So, I was just like, "Whoa! That shit is crazy." I was not expecting that. I was still, like, 17 at the time, but people all over the world—not just in Atlanta—were starting to see my stuff, so I started uploading a lot of my classes and just really putting my name out there.

And then the second thing that really blew up for me was when I did Beyoncé's "Run the World" with my Bad Girls Club group. It was kinda like the first of what I call "conceptualized videos" because, at the time, I just felt like dancers really weren't getting put in the forefront for music videos and I was like, "Well, let me shoot that music video with just dancers." I put that out, and I actually had the to give that choreography to Beyoncé herself, but it actually didn't work out, so that's kinda the reason why I shot it. It hit like a million views in a day, and I think it was because people thought it was the actual video, because I dropped it before she dropped hers.

In your opinion, what is the most important element of dance?

Passion, feeling, emotion. I think dance has gotten a bit watered down—now so many people want to dance, and they just make up moves, but sometimes what's missing is the passion and the emotion behind dancing. Dancing is a reaction to music. It's not just a sport for fun. It is fun, but the basis of dance is emotion. You're inspired to move your body because the music is good. I think that's most important—feeling and vibe and connecting to your music and telling a story with your body.

I've always just kinda had a knack for envisioning things. I see the whole thing, and I see it in detail. And if I can't get all the details, like visually, in my brain, I usually won't do it. But when I do come up with this overall plan or this idea or this image for a video, I just start writing stuff down. And that's another secret—I write every idea I have down. It's a habit now, to where I'll just make a note on my phone or write it down on my notepad, but that's usually like the first real step to making anything like that happen because the dancing and the choreography is the easy part. The storytelling and the emotions or the vibes or the different scenes is what can make it really stand out. So, I really just take my time and see every scene. I usually look at the lyrics too, because it helps to section off each part. And then, once I have the creative, I usually tell one person so that I don't sound crazy, like, "Does this shit sound dope or am I tripping?" And then I call my camera crew, which is this duo, Royal x Rae, I've been shooting with since the beginning as well. Once the vision is set, then I set rehearsals because, like I said, the dancing is really easy for me. I'll have two rehearsals a lot of times, and then we'll just shoot it. So, it's very organic. It's never anything that's overly like, "I gotta get a video out this month." Or, "I gotta do this now." It's just whatever song comes to me, and it's always natural. And I edit my own videos as well, so it's a whole completed vision from me.

I saw that you just choreographed Missy Elliott's Essence Festival performance. What is it like working with major artists like Missy and Beyoncé?

It's the hardest thing I've ever done. The sad reality is a lot of artists in music or performers nowadays really don't give a fuck about anything. Like, they're just content with stuff, or they'll just let you do whatever. They're not really creative in a sense. A lot of times the choreographer or the artistic director comes up with everything. But when you're working with a Missy Elliott or a Beyoncé, especially Missy Elliott, who's the true first black innovator of the new decade, she really works you extremely hard, and she's the artist who is at every single rehearsal. She sits there from the beginning until the end, and a lot of times she will set a rehearsal for an entire month for one music video. So, she comes from an era of having a huge budget and really working with a lot of dancers. But she's also creative, and so she pushes me. Usually, I'll come into rehearsal and be like, "So this is what it is, this is what we're doing." And everybody's like, "Okay. Cool. Great." Missy, she's like, "Nah." She's like, "You can do better. Let's change that. Let's change that section right there. Let's put that part on the ground. Move that section to the top." She's very vocal, and she really pushes you to be great, so it's one of the most appreciative jobs you can be on.

How important are visuals to your work?

On top of being a choreographer and a dancer, I equally have always loved being a director. I've hand-edited every single I've ever uploaded—from all my classes up to all my concept videos, so that has just been a natural progression for me. I really want people to know that I am a director as well and want to direct more stuff that doesn't have dance. I've done a couple music videos that are out that I really don't even tell people about just because I want it to be out there. And I have a couple more music videos that I just shot. I just did Bahja's lead single for her new video, which will be dropping soon. So, yeah, I love directing, and I definitely want to direct more, and definitely want to be known for my visuals as well as my choreography.

What would you say to those who want to pursue choreography or dancing?

Your business is just as important, if not more important, than your talent. I think a lot of people just think, Oh, I'm just gonna be the best dancer. Or, Oh, I wanna be the best. But a lot of times to be successful and to really make it in this industry, you need to have your business in order. You need to be a good businesswoman or businessman because it's business having your headshots and resume, being a respected, well-liked individual. No one's going to call you for a gig if nobody likes you or they're not going to put you on a tour if people can't be in a room with you for more than five minutes. Also, knowing how to network and getting more jobs for yourself instead of just kinda sitting around and waiting for jobs to come to you. I've never done that. It's never worked for anybody else. Being proactive, being a bigger person is just as important as being a well-rounded dancer or artist or choreographer. It's all about the hustle. Whatever you do you just have to get up and put 100 percent into it every day, and you will definitely see the outcome.

Do you have a favorite piece that you've choreographed?

No... yes and no. I could say a couple, but I'm a hard critic on myself. I don't know if I've had a favorite, but I definitely have a few that I was proud of myself, especially just going through what I've had to go through to get the end result. "Motorsport," I think, is my new favorite, but I think when I did Missy's VH1 “She's a Bitch” tribute, I think that's a fave for me. But I've been blessed to be able to do a lot, but I think those two are, like, my new favorites.

What was your inspiration behind your clothing line?

My father actually used to sign his checks with the Bankhead signature, and he would put the money sign on the "B," and so when I was a kid, I used to see that. And I've always been a teacher, and I used to teach a lot of workshops, and I just was like, "Well, let me sell some merch at these workshops." So I made these hoodies, and I used the signature, and I kinda redid it my own way, and it just took off. It was one of those things that just took off, and I've always loved fashion and appreciate fashion and branding. Puffy is a huge inspiration of mine because he does everything, and he does everything well. Just having my own brand and doing it properly and having people receive it well is dope, but it's definitely hard work.

What are you up to now and are there any projects that we should be looking out for?

We are starting the third season of Star, which I'm really excited about. I'm actually working on this movie called Little right now with Issa Rae, Regina Hall, Luke James. It's really dope, shooting in Atlanta, and there's a lot of great choreography in the movie. So I think we wrap that up this week. Definitely be on the lookout for my girl Normani from Fifth Harmony. Definitely going to be making a lot of noise very soon. I'll be debuting my Fall/Winter line in like two months. I'm gonna actually release that with a fashion show. I'm always working on a lot of stuff. Migos is going on tour with Drake. So yeah, just keeping busy.