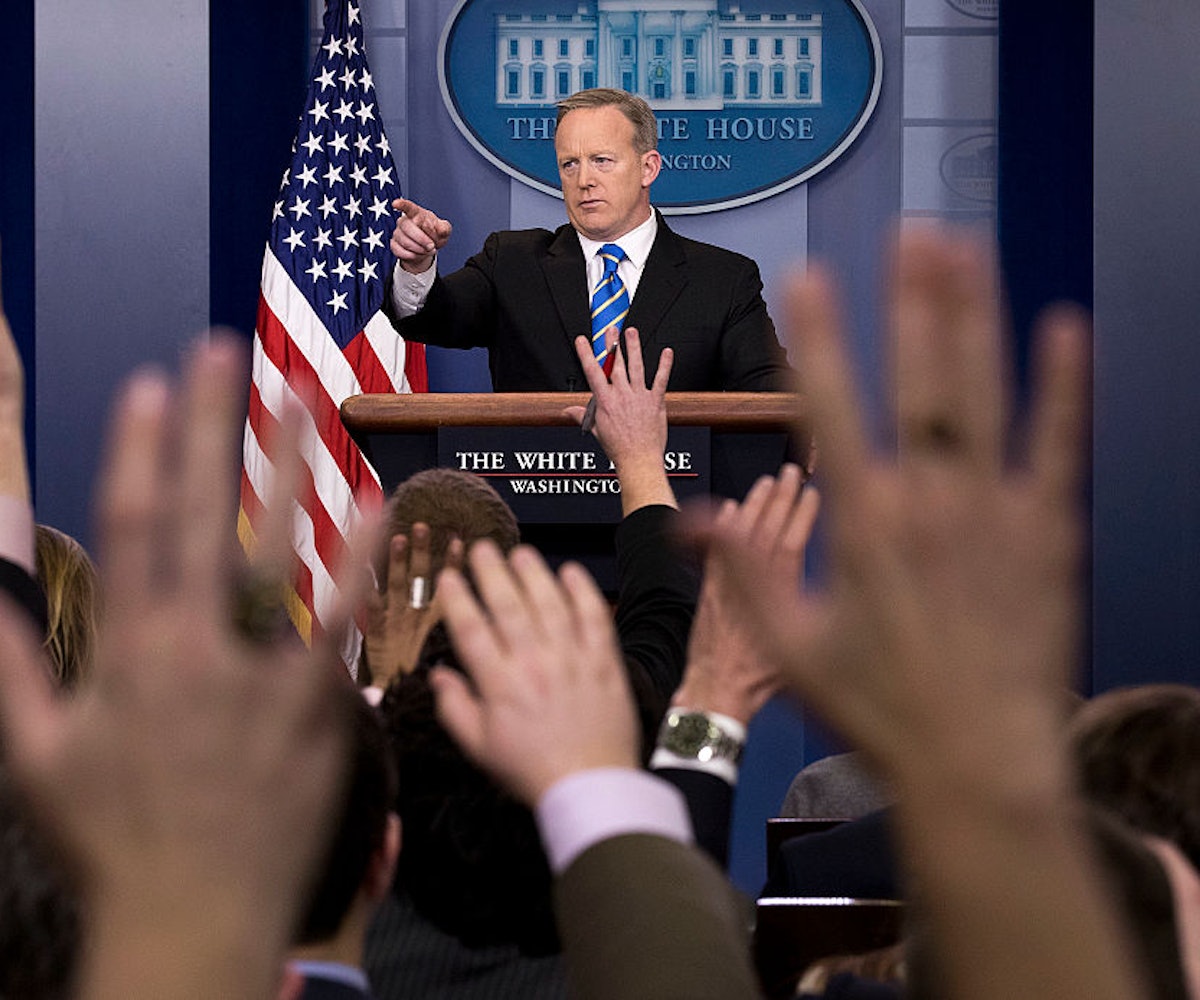 At this point, everybody knows that the Trump White House creates its own reality via its ongoing distribution of "alternative facts." What this means is that while there might be incontrovertible evidence of everything from the small size of Trump's inaugural crowds to the small size of Trump's hands, the White House—often in the form of press secretary Sean Spicer—will deny reality, and attempt to spin the truth in an effort to create a new reality, one in which Trump isn't suffering from historically low levels of popularity and comically small hands.

Today, Spicer attempted to make the public believe yet another hard to swallow story—that Donald Trump eats salad. Yeah, that's right, Spicer wants the American people to believe that the same Donald Trump who eats his well-done steak with ketchup also eats salad for dinner every night. Good try, Spicey! You can fool some of the people all of the time and you can fool all of the people some of the time, but you can't fool any of us when it comes to Trump's eating habits. Better luck next time.

Oh, and by the way, this latest attempt to befuddle the public came during an exchange Spicer had with journalist April Ryan, one which caused Ryan to later tweet the single word "Lawd" in exasperation. The reference to salad came about because Ryan understandably brought up the dismaying fact that, only two months into the Trump presidency, there are tons of distractions from policy issues—distractions like Russia. Spicer interrupted Ryan with a snide and angry dismissal of Russia being a problem for Trump, saying, "If the president puts Russian salad dressing on his salad tonight, somehow that's a Russian connection."

Which, you know, sure, if Trump ate salad, he probably would use Russian dressing which is basically just mayonnaise and ketchup mixed up with a little chopped pickle, and thus makes sense for Trump as a salad accompaniment. But we maintain there's no real way the man eats salad on the regular.

Something else we maintain? That Spicer is rude as hell to Ryan, including commenting more than once on the fact that she was shaking her head, which is a thing, last I checked, that a person is allowed to do. Moreover, Spicer's poor treatment of Ryan is a disturbing reflection of the way Trump, his administration, and his supporters have repeatedly treated black women, namely, with great disrespect and abject dismissal. Past examples include a prior exchange Trump himself had with Ryan, in which he assumed she was friends with members of the Black Congressional Caucus, because, uh, Ryan is also black; when Trump called then Secretary of State Condoleeza Rice a "bitch," something that Ryan alluded to today when she questioned Spicer; and, most recently, when FOX's Bill O'Reilly insulted Representative Maxine Waters' appearance.

This disgusting pattern of racism and sexism is a testament to the complete lack of courtesy that Trump and his ilk show toward anyone who does not look, think, and sound like them. It's behavior that should not pass by without comment, and it's behavior for which there is no excuse and no apology. It simply must cease—hopefully, because people like this will eventually be removed from power. Or, in the words of the great Waters: Get ready for impeachment.