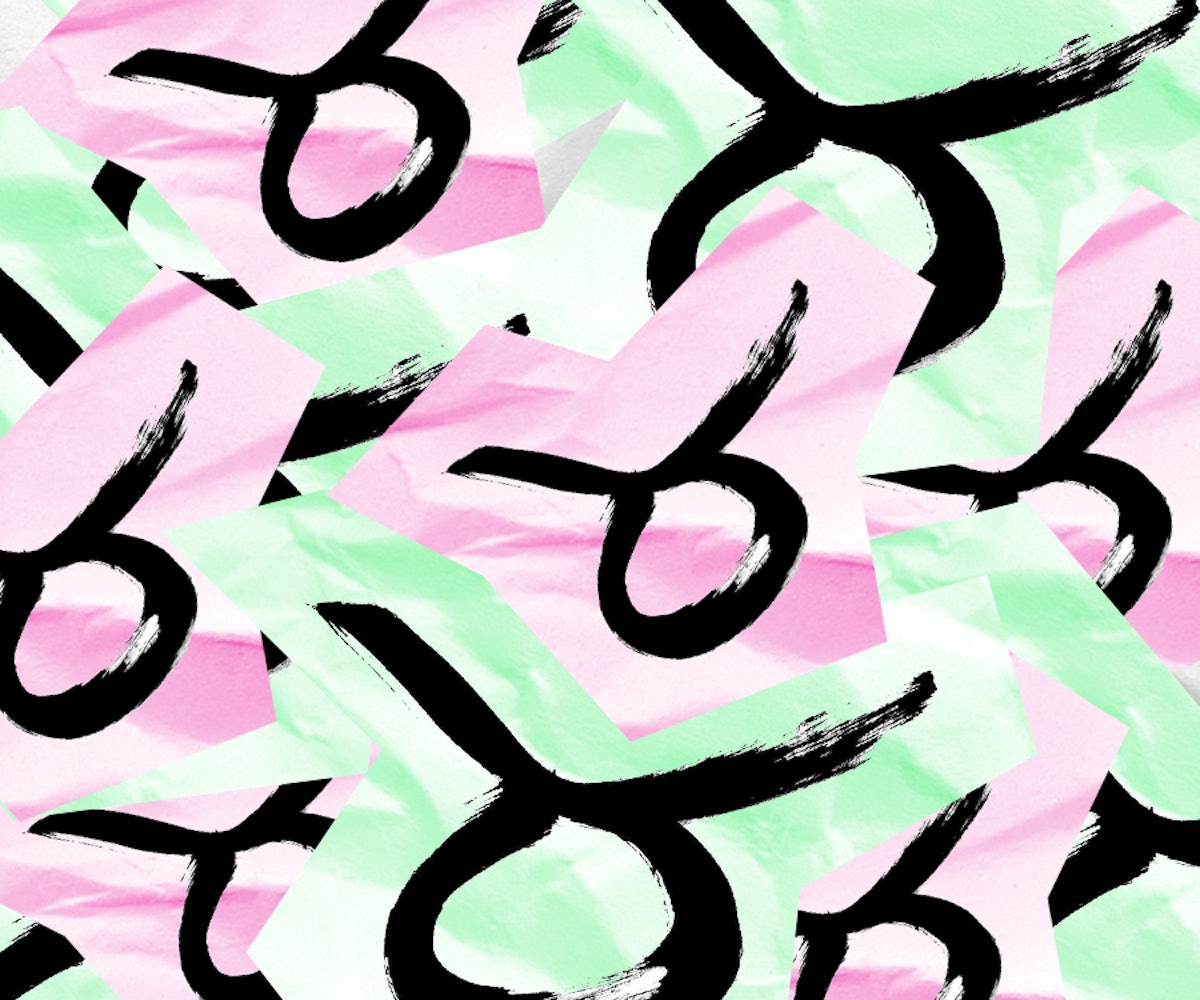 There’s a lot to admire in a Taurus from afar. Steadfast, honest, independent, and ambitious, Bulls tend to have their shit together—at least on the exterior. Bulls can seem as iron as oak in their daily work ethic, but once these earthy spirits catch a lovey-dovey vibe, the sturdy beasts melt into cuddly Teddy bears, faithful companions, and indulgent hedonists en boudoir. With a ruling planet as sensual and luxurious as Venus, goddess of romance and wealth, Taurus knows how to present themselves aesthetically, employing their keen sense of style and endless hunger for all things beautiful. This trait often carries over into plush, cozy digs that fully reflect Taurus at their core: Productive but comfortable at all costs. But slow your roll, stargazer—getting an invitation into the Minotaur’s cushy Labyrinth is another game entirely. Read on for your guide to seducing and conquering Taurus, the zodiac’s most lovable, sexy beast.

Despite their docile, calm exteriors, the Taurus personality is complex and multifaceted, especially when it comes to their take on dating, sex, and relationships. Some born under this Earth sign could be labeled as serial monogamists, spending little to no time alone, transitioning from one comfortable, long-term relationship to the next with ease. Others are so set in their ways that they cannot imagine compromising their day-to-day routine for anyone, sticking to casual hook-ups and adventures in playing the field instead.

And though Taurus loves their independence, finding a Taurus who’s single by choice is rare. These sultry beasts crave the creature comforts of domestic partnership, often seeking motherly or fatherly love and nurturance from their long-term partners. Those that fly solo for long periods of time tend to operate on sheer convenience and complacency, the shadowy traits of Taurus’ darker, more self-centered side.

Once the scent of seduction is in the air, Taurus summons their patience and heady curiosity, examining their prospect carefully—at their own pace—from every angle before proceeding any closer. Taurus won’t budge from their cushion if they’re not ready, which is where so many potential lovers and partners in pursuit become impatient and give up the ghost, failing to conquer Taurus’ secret gauntlet. When you pass through the veils of Taurus’ trust and have proven yourself truly worthy of their super-chill time, you’ll know: These lighthearted-yet-logical lovers will charm the pants off of you with painstaking preparation and class that would make their mama proud.

Because Taurus is so pragmatic and relaxed, it’s very easy to maintain a casual hook-up relationship with one—as long as you’re crystal clear in communicating your expectations and desires. Earth signs like Taurus are tactile, deeply physical folks who crave touch, lending them a magical ability to seduce and be seduced matched only by Scorpio, their complementary sign.

Their logical, uncomplicated minds make these signs one of the easiest to break up with (no, really). As long as no major disrespect has been leveled against them in the course of your entanglement, transitioning from a casual dating or sexual relationship to a purely platonic friendship likely won’t be challenging for Taurus. Wounding a Taurus isn’t that easy to do, but taking advantage of a Taurus’ generosity or making them jealous—intentionally or otherwise—is a clear shot to getting eighty-sixed from their life for good.

Every personality is made up of all 12 signs of the zodiac in our individual natal charts, but there’s little room for denying basic chemistry and statistics when it comes to who’s dating who. Astrologers look to several factors in determining who you’re compatible—or horribly matched—with, including the Sun sign, Rising sign, and where Venus places in the chart.

Taurus natives (or those with Taurus as their Rising) have a deeply rooted need for security, order, and privacy in their romantic affairs, which draws them to sister Earth signs—Capricorn and Virgo. Water signs (Pisces, Cancer, Scorpio)—especially Cancer—provide Taurus with the essential maternal nurturance, comfort, and empathy needed to build a bond that will stand the test of time. Direct-opposite sign Scorpio is the only watery wildcard for Taurus; these two love each other passionately for their ability to balance each other out—until things get stormy. Then, watch out, you might get caught in the crossfire of prickly arguments and toxic possessiveness.

Driven By Desire: What Taurus Wants

Unabashedly selfish at times, Taurus tends to notice anyone whose strengths can match their own, particularly in dependability, steadiness, and objectiveness. Tranquility, peace, beauty, and order are Taurus’ grand goals, and they’ll plow past anyone who isn’t on their relaxed-but-focused level to achieve a lifestyle steeped in those virtues. Bulls are attracted to independence, organization, and self-sufficiency, but also revere deep sensitivity, thoughtfulness, and intuition for care-taking and healing. Thanks to ruling planet Venus, Taurus tends to gravitate toward otherworldly, beautiful people, and can be easily distracted by material luxuries. Still, these sensuous, earthy folks are drawn to gentleness and confidence, and tend to get on well with animal lovers and down-to-earth nature worshippers.

Once you’ve gained Taurus’ golden trust and have become friendly, you can finally get close to them physically. Tactile, sensuous Taurus doesn’t stand a chance when the magic of affection through physical touch is employed. Those born under this sign are known to be physically hypersensitive (and often very ticklish), making it easy to plant seeds of seduction through the innocence of a handshake, a heartfelt hug, or a playful squeeze of the shoulder. Once you get even, uhh, friendlier, you can bring out the big guns to melt the Minotaur—massages (especially on the neck, head, and shoulders), caressing, cuddling, and soft kisses.

Demonstrating that you’re comfortable and at ease in their presence is the highest compliment you could give a Taurus and a potent aphrodisiac. Bulls are out to enjoy the finer things offered to the five senses and are turned on by the idea of a dependable partner in crime who likes the same things. Savoring decadent, indulgent foods together (from Michelin-starred bistros to bodega fare), watching and listening to an amazing band live, or taking in a film festival are just a few of the pathways to connecting with a Taurus. Mutual respect stimulates this sign’s powerful libido, so don’t neglect thoughtful conversation.

When all else fails, cook. The most dependable way to a Taurus’ heart is through their love of food. There’s nothing sexier to Taurus than safety and comfort, and these typically old souls appreciate old-fashioned traditions, like family recipes and aging quilts. Sincere compliments—especially on their appearance and intelligence—tend to go far with this Venus-ruled sign, but don’t blow smoke in their eyes with false flattery as they can spot a fake from a mile away. Material gifts, like flowers and meaningful trinkets, are also powerful tools in seducing Taurus, but tread lightly: Like false flattery, once Taurus senses dishonesty or feels that they are being “bought,” you’re done.

Getting Down: Sex With Taurus

Earthly delights of the flesh are this intensely sensual sign’s jam—but not in the way you’d expect. Though Taurus isn’t one to burn through the bedsheets with scorching vigor, this sign still possesses steady stamina for lovemaking that can last for days. Seriously! Taureans have been known to indulge their lovers and partners in drawn-out, languid sex sessions behind closed doors, pausing only to recharge with—what else?—a nourishing meal, dank snack, or to cuddle and watch a film or cartoons.

Venus ensures that Taurean sex is experienced through all five senses, from their gentle touch and soft voice to their alluring appearance, hypnotic perfume, and memorable taste. In fact, Taurus folks are said to be extra-sensitive to the subtle smells and tastes of human pheromones, which are chemicals produced by the human body that signal arousal and fertility. How beastly.

Taurus’ Venus rulership also lends these folks an unmistakable flair for romance and seduction through physical touch, but like everything else in their lives, Taurus prefers to take their time relishing the sweetness of the experience and will not be rushed. A routine of regular, almost-scheduled sex is extremely fulfilling for these Earth signs, and disruptions in their sexual schedule could lead to psychic stress and insomnia for these strong but emotionally tender signs.

Taurean sex itself is comprised of an arsenal of basic, yet fully satisfying, moves—they know how to get the job done well, but the experience likely won’t be an inventive sexual adventure. Once Taurus finds a successful route through foreplay and fucking that leads to the Big O, they won’t stray from their mastered techniques. Taurus’ partners must be patient lovers; Bulls are somewhat slow to becoming fully turned on and need to take their time to orgasm. Security pairs with sexuality for Taurus, and once they sense uncertainty, a breach in privacy, or unpredictability, their sex drive will shrivel like a slug showered in salt. Watch out for possessiveness after a sexual connection has been established—though Taurus is eternally chill, against games, and would never admit to jealousy, an air of ownership and protectiveness of their partners dies hard, even long after the relationship is over.