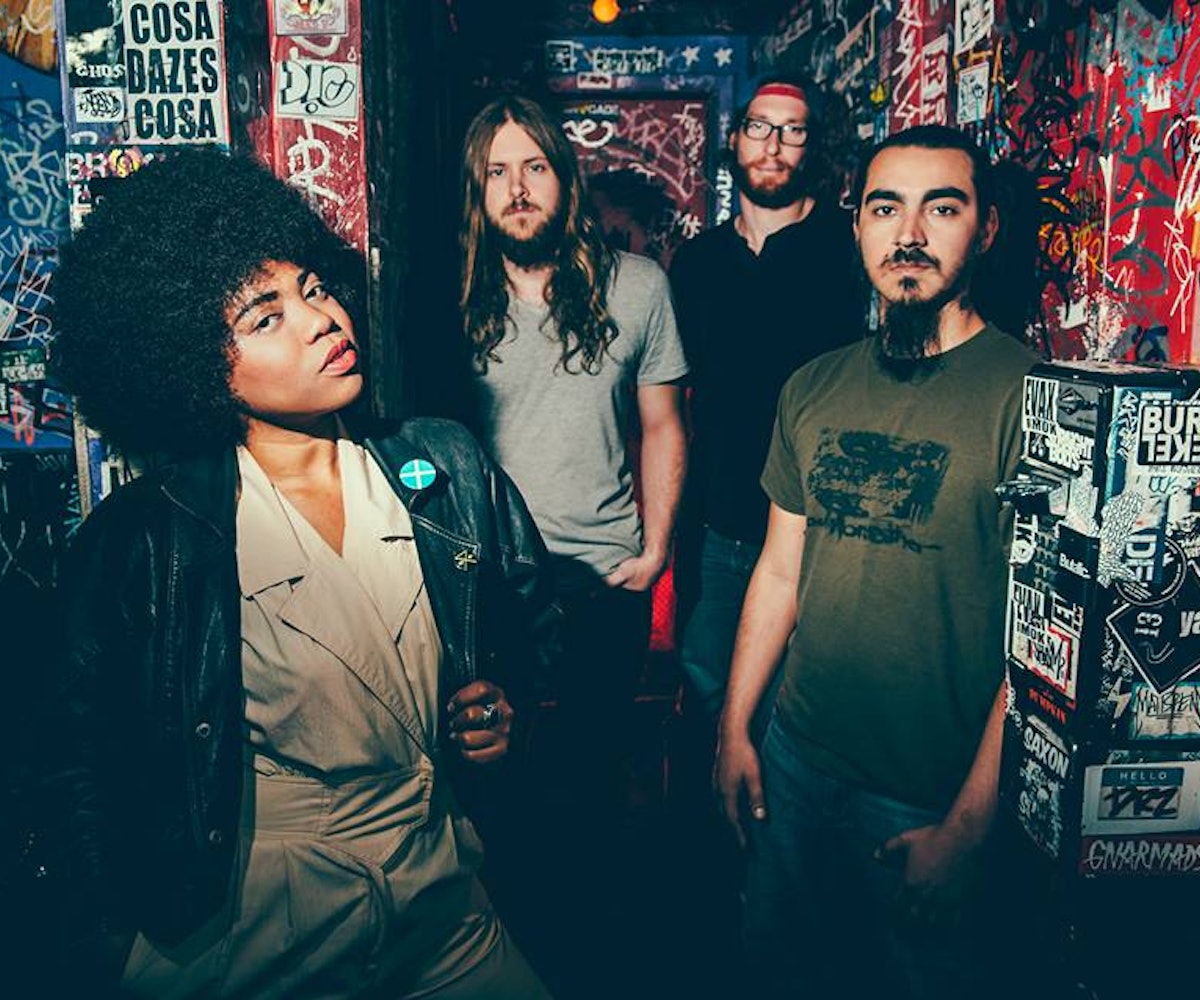 Slaying dragons and chatting up sphinxes is all in a day’s work for punk-loving rock band Seratones—at least, that’s what their energetic and inviting frontwoman, AJ Haynes, says. Metaphorical or real, their grungy modern-day odyssey, laden with dingy punk shows, casino cover bands, and Louisiana-style blues inspired the four Southerners to crank out an album that manages to roll garage rock, blues, and greasy old-school punk into one explosive package.

The Shreveport, Louisiana-bred group consists of Haynes and her friends, Connor Davis, Adam Davis, and Jesse Gabriel. Together, they have a weapon of mass destruction—classic, unadulterated rock ‘n' roll that’s already punctured the lungs of music critics and fans alike.

In between shows, Haynes took a break from being the badass female version of Odysseus and sat down to chat with us about casino cover bands, artist Kathleen Hanna, and creating inclusive music. Read the interview, below.

I heard Seratones met at punk shows in Louisiana. How exactly did you guys fall together?

It definitely came about organically. We all had projects before. I met Adam, our bassist, when he was the lead singer of Sunday Mass Murder, and, if you can't tell by the name, that's about the style of music that they play. After that, Connor, Jesse, and I had a project where we got paid to play covers. In a lot of cities, where the income is based on casinos, like where we’re from, that's where the money is for a lot of musicians, so you gotta pay the cost to be the boss. For me, I was paying for my school books. I don't know how I did it because it's not a good idea to be at a bar every Tuesday while working on your undergraduate degree, but whatever. But, Seratones came about because Connor, Jesse, and I had been working on some original material and we ended up playing this competition and won some studio time and cash which really set us on the right track. In Shreveport, there's not an infrastructure for music. It was kind of a no-brainer because we all played together in different projects and we were basically like family.

Punk has been listed as a huge influence for you guys, can you talk a little bit about that?

One of the first bands that I stumbled across was Mudhoney, in particular, "Touch Me, I'm Sick." I don't know how I came across it actually; this is before I even met any of the guys and I was like, "What is this?" I actually do have this slight obsession with bees and honey, so I stumbled across the name and I was like, "Mudhoney, oh cool." It still blows my mind that Mark Arm can still slay, you know? He's got such an Iggy-esque presence, and from there I was just like, "Okay, this is grunge, so what is the precursor to this?" I always like to find out the root of something, as much as I can. From there, I just got into a lot of West coast hardcore and punk music.

What was making Get Gone

we were really going off the "first thought, best thought" mantra. Every song is different, and I think the main, core intention of the record was, "Hey, we want to write a rock 'n' roll record," whatever that means. There’s a lot of experimentation that happened. Songs took on a lot of different forms. But, I guess, the journey was more like a labyrinth. We definitely probably slayed a dragon, we had to talk with a sphinx to get the magic code to write "Chandelier."

As a powerful frontwoman, who do you pull inspiration from?

One of my favorite frontwomen is Kathleen Hanna. I think Le Tigre is getting back together, which is bitching. What I loved about her, aside from her explosive presence, is that she thought it was her duty to create a safe space for anyone who wasn’t a white man to participate in the music that they love. I fall in love with performing because of seeing and being around other women on a stage. Irma Thomas, who wrote "Time Is On My Side," the song that the Stones took and ran with, she was one of the first women that I saw perform at a blues festival, and she's so rock ‘n' roll. There's something about her that, obviously, Mick Jagger found appealing.

Do you feel a duty to create an inclusive space when performing?

I think that is at the top of my mind almost all the time. There's this power in creating an open space and providing a space where people feel comfortable. That was something with the punk music in our community, in our little scene, our tribe—I felt safe. It wasn’t like when you hear a lot of horror stories where women feel threatened because they get bludgeoned. Whenever I can look out in a crowd and see a little girl who's never seen a woman perform before, that’s so important to me. One of my favorite memories from Europe: We were playing End of the Road festival, and while we were setting up, this gentleman had his little three-year-old daughter on his shoulders, and she was like dead center in the field. No one else was there; there was maybe a scattered handful of people. To know that she's watching me—that's who I’m accountable to—it is really powerful and something I don't take lightly because we’re performing for a variety of age groups. There is everyone from three-year-olds to 50-year-olds and music has this ability to imprint itself upon how you make sense of the world.

What’s the best part about fronting a badass rock band?

Being this girl or this woman on stage, people are going to make whatever they want of you; I have no control over that. What I do have control over and will never relinquish, is making sure that we provide an inclusive space. I can do whatever the hell I want. That's what's great about being a performer; you can't tell me what to do. It's fun. I also have the pleasure of performing with not only some of my best friends, but some of the best musicians that I've come across. Being the female lead, that's what I’m most excited about: doing whatever the hell I want, being inclusive, and making people feel like they can do the same.

Any updates on a second album?

Honestly, it's been pretty touch-and-go, we've just been on the road so much. We're finding our rhythm in ways and holding onto fleeting ideas we hope to use for songs. I guess this is where high and low technology comes in. Songs are born literally out of the air, out of nothing, and whenever we're on the go, we need to utilize technology to help us remember things. We’re working on it.