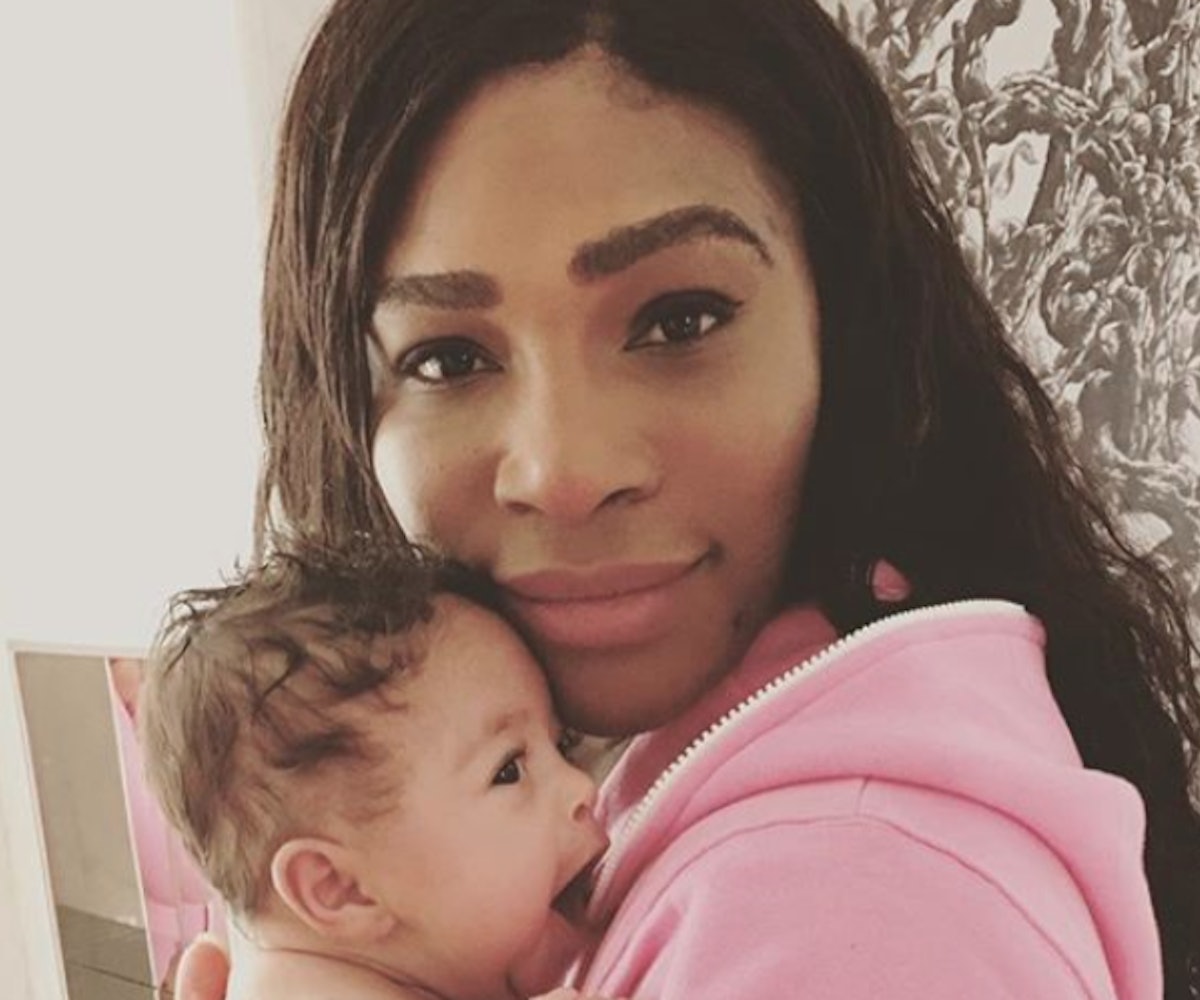 Serena Williams is looking toward the future, bare-naked against a gray background on the cover of Vanity Fair's August issue. She is pregnant, both with her child and our expectations. Her central position on the cover, on our cultural stage, means she is burdened with our demand for her to be exceptional, to be strong and soft, to prove her humanity to a mainstream audience. Williams, then, is the patron saint of black womanhood—she is the daughter, the sister, and now, the mother. She is everything.

Long before Williams announced her pregnancy, she was tasked with performing a blackness that is both deliberate and approachable. She was asked to perform a femininity that was also strong even as people perpetually critiqued her muscles. All of these contradictions are apparent on this cover, even as her head is held high, her hair flowing, showing that she is relaxed and regal.

Williams can’t ever quite nail looking unconcerned, however. Williams is a winner and a fighter, the most astonishing sports player to penetrate pop culture this side of Michael Jordan, and she is always aware of wearing this crown. Williams holds 23 Grand Slam singles titles (the most in the Open era); she also holds the misogyny and racism flung at her because of those wins. And on this cover, she looks like a woman aware of this burden, but prepared to push it aside for now, and focus on this new aspect of her life. The truth is, being black and famous means to always be expecting. Maybe you’re expecting something joyful—a child, awards, acclaim—or maybe you’re expecting another reminder that nothing you do will ever be good enough for some, maybe you’re expecting a new way to consider black humanity, including your own. No matter what you’re expecting, the weight is still there. It’s carried on the brow or the shoulders or the belly; it’s there, and Serena, on this cover, put it center stage.

Black people have always lived on the stage. The name of the stage has changed—from the auction block and the theatre to FBI case files and the tennis court—but they all serve similar purposes. Stages are where we see black people being consumed. And it’s not just for entertainment, but for the negotiation of our humanity in the mainstream world. We’re on the stage, and the white gaze is asking questions about our existences: Are they real? Do they feel pain less than we do? Why are they faster? And the question that’s followed Serena, specifically: Is she the best?

A black person’s excellence isn’t based simply on their capacity to excel, but their capacity to excel despite. That’s the variable that can’t be measured by numbers when we are talking about excellence, but it is the variable always present in the black person’s life who is interested in excelling. The entirety of the black person’s struggle, including the process and the result, has to be done excellently. Sweat, miss, fail, be looked over, be undercut, be discriminated against, and even be replaced excellently. Then, once you get a mere portion of the fruits that you’ve earned, you still must perform this controlled, humble, mild-mannered exceptional character. And all the while, you are being carefully scrutinized, intensely observed.

Measuring Williams’ excellence as an athlete based off mere numbers is possible—nobody has been more dominant for a longer time at tennis than has she—but it is also ignoring the historical context surrounding her. It is ignoring the fact that our society has designed the stage upon which black women play, and after consuming each act of a black woman’s life, the audience wants to see her fall. This, after all, is the only way to maintain political, gender-based, and racial hierarchy. Set them up and watch them fail.

Then there are those arbiters of black excellence for whom failure is not an option. Muhammad Ali was not the greatest only because he boxed well or won a lot of championships. It is because he arrived at this greatness despite being black in America. And he did this all while still maintaining a pro-black and anti-war political stance. Grace Jones isn’t just an icon because of her talent as a model, actress, and musician. It’s also because she was a singular being, who played with androgyny in a way no one else had. Beyoncé isn’t the greatest entertainer alive merely because she packs stadiums and sells a lot of albums. It’s because she is doing it in a country that too often renders black women and women of color silent. And Williams isn’t the greatest simply because of her dozens of titles and speed of her serve. She is the greatest because she has achieved all this despite being treated differently than her white competitors, despite having to face criticisms that they never would. She did it all while being watched, and she thrived anyway.

And now, Williams has had her baby, and I suspect she knows that her baby is being watched. Serena is not only called to perform perfect motherhood but her child, Alexis Olympia Ohanian, will one day be called to perform perfect childhood. This is the wrinkle above Serena’s eyes, the one she can’t relax away on the cover of magazines. It is why, when the stage we’re on is not our own, the performance of carefree black women, of all black people, will always be performative. We know we’re always being watched. We know how necessary it is to be careful. We know that very quickly the awe may transform into violence if we say or do the wrong thing. Despite this, people like Williams go forth.

One way Williams can subvert this is by building and being on her own stage. Williams has used her Instagram account to display her newfound joy in being a mother and her carefree approach to maternal life. It is beautiful to watch Williams decide that if she is going to be watched, she’ll be the curator of her persona and her consumption. It is reflective of how black people at large have used our own social media presence to create programs, amplify our voices, and organize in a way where we are in control of our image and narrative. Even simply watching Serena hold her daughter in her lap feels beautiful and powerful all at once; it is an incredible gift Serena offers here, as she shares her excellence on her own terms, in a realm that resists quantification.

This fits into the larger scope of her life; Williams is the best because her exceptional performance did not begin on the court. It began once she was born a black woman in America, and still decided to compete. It began once she was born in a poor, black neighborhood, and still found a way to find abundance. Despite racism, misogyny, poverty, and racism, Williams persisted. This is why she is the best. Under conditions that would probably break both her competitors and critics, she finds space to win. That fierce sense of excellence cannot be contained in numbers or statistics. It is lived by some and observed by others. It is lived by Serena Williams, and its lessons will no doubt be passed on to her daughter as well.