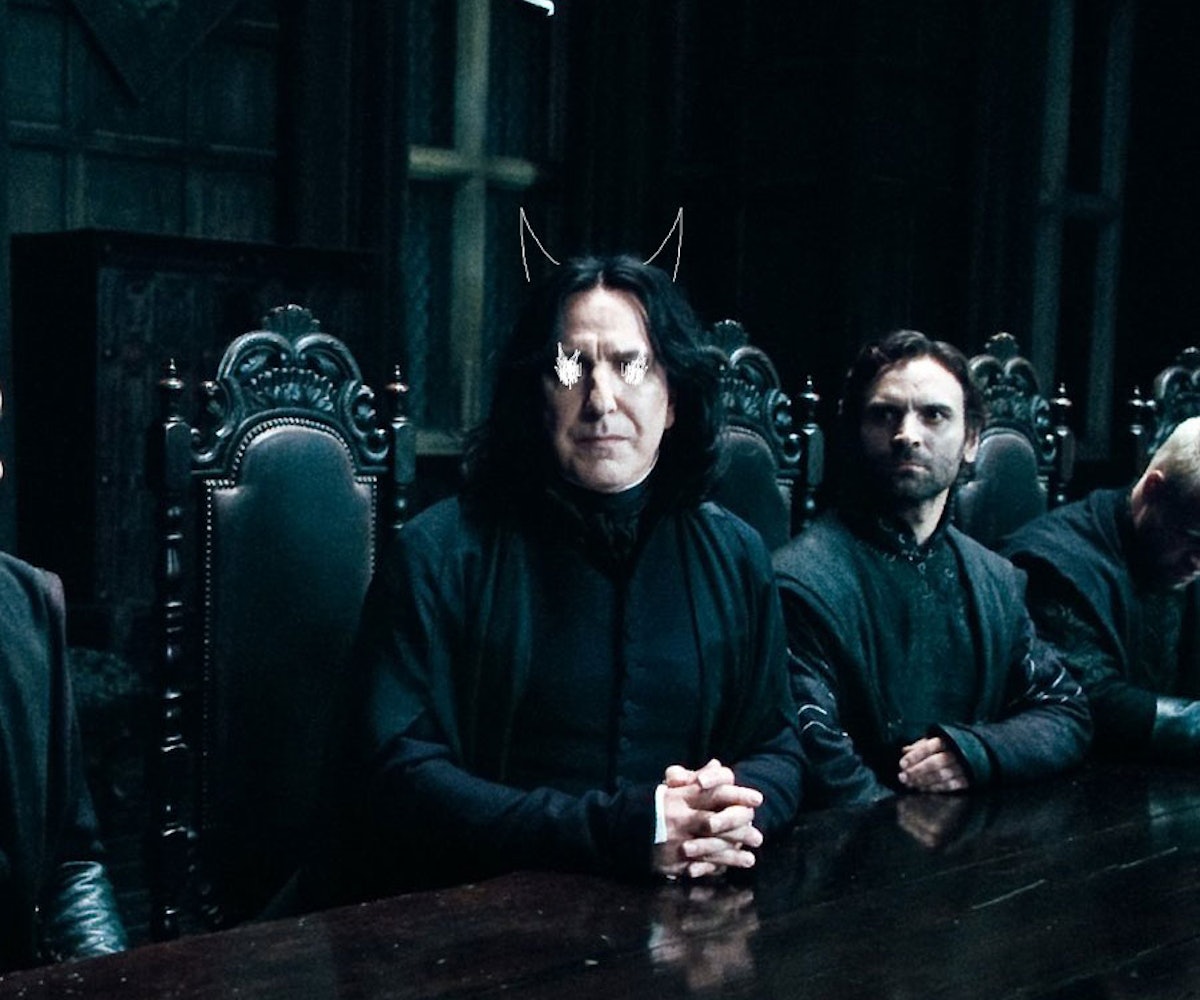 Every few years, as a practice and with the intention of imbuing my life with a true sense of magic, I crack open the Harry Potter series, and rediscover the reasons that I so heartily love the works of J.K. Rowling; her sensitive portrayal of flawed characters, her intuitive handling of very serious discussions of complex ideas like life and death, good and evil; and of the archetypal journey of one hero who, in the end, is actually three characters. Each time I open those books, which are all first edition hard covers, I discover something new and beautiful. That's the spell Rowling, the true Hogwarts headmistress, casts upon her books.

This time, however, I was struck with a realization that would scandalize any true Harry Potter fan: Severus Snape, for all of his complexities, is a real asshole.

Yes, I know what the Snape fans have a lot to say above this, and I have to say, this doesn't diminish how much I enjoy the self-anointed Half-Blood Prince or his presence on page, but now, with some distance between the anxiety of waiting for book after book, I can look back on his trajectory and truly identify the potions professor as being a not-very nice dude. In the Harry Potter fandom, very few characters are beloved like Snape, with the plethora of "Always" tattoos, and the innumerable pages of fan-fiction dedicated to absolving his legacy, all due to those two chapters in Deathly Hallows (as opposed to, like, the last six books where he behaved, to quote Ron, like "a total git.") Like many readers, I find the fast-forward epilogue of Hallows is both gratuitous and needed. Harry tells his son Albus Severus that he is named after "two of the greatest headmasters Hogwarts has ever seen" and that Snape was "probably the bravest man I ever knew." What an honor...and it is one that Harry is much too kind to bestow on Severus Snape, who a) aside from intervening a handful of times when Harry was in grave danger, outright encouraged Harry's misery, and b) was actually a pretty terrible Hogwarts professor. (Clearly he was stopping the Carrow siblings from inflicting mortal harm on students, but under his regime there was very little learning and very little solace. In fact, his students outright feared him for his entire tenure. Voldemort is pure evil, but even he surely saw the value of a good magical education?) There is no evidence that he quietly sowed the seeds of rebellion by letting Dumbledore's Army exist, and he oversaw the day-to-day dealings of Hogwarts with a cold detachment.

In fact, cold detachment was kind of Snape's M.O. Because the most touching, evocative Snape experience occurred in the pensieve, when Harry spied Snape showing Dumbledore his patronus, which, like Lily's, was a doe. Dumbledore asks, "After all this time, Severus?" to which Snape replies that infamous phrase, "Always." Always...except when it, you know, matters. For Snape it was much easier to love a dead person in secret than it was to love a live person who challenged his racist, problematic beliefs. At NYLON, we recently wrote a story about characters everyone loves but are actually bad people, and a commenter accurately pointed out that James Potter should be on our list. It's a good call. We don't see much of James—he isn't reminisced over as much as Lily is—but when we do, he is cocky and overt. Harry wonders whether or not his father was cruel and doesn't come to any conclusive decisions. In the end, his father ended up doing the right thing and growing into a decent husband (and also saving Snape's life), but that doesn't make him less of a bully, or his tormenting of Snape any less justifiable. But. BUT. Snape, upon his first introduction, as a small child who was enamored with Lily, was always cruel to the non-magical. (His capacity for cruelty is pointedly demonstrated by his creation of the bloody "Sectumsempra," a spell that none of the heroes would have ever dreamt up.) In fact, it was Lily's capacity to see the goodness in the two men in her life that made each relatable. That was Lily's gift.

“Slipped out?” There was no pity in Lily’s voice. “It’s too late. I’ve made excuses for you for years. None of my friends can understand why I even talk to you. You and your precious little Death Eater friends—you see, you don’t even deny it! You don’t even deny that’s what you’re all aiming to be! You can’t wait to join You-Know-Who, can you?” He opened his mouth, but closed it without speaking.

“—to call me Mudblood? But you call everyone of my birth Mudblood, Severus. Why should I be any different?”

(See? She isn't any different. It’s something that Snape never realized, especially as he got older.)

Yet, in some ways, it was within the vow that Snape made to Dumbledore to protect Harry that Snape demonstrated his true capacity for torture. Lily Potter meant so much to him that he switched sides to join The Order and protect her son; but not enough to look past his own blindness to be an ally (or mentor) that Harry so, so desperately needed. He loved her inasmuch as it required no real change in him, he loved her but couldn't forgive the innocent child she bore. If he thought it was Neville Longbottom who was the recipient of the prophecy, Snape wouldn't have cared: He probably would have stayed Team Death Eater for the rest of the series. This is a crucial point: If Lily Potter hadn't been struck down by Voldemort, Snape would have continued in his Death Eater's robes, unperturbed. Snape begged Voldemort to save Lily's life—screw her husband and child, of course—due to the prophecy that he himself delivered to his boss. Not only did Snape essentially sign her entire family's death warrant, and his way of repentance was to just save her, and when that failed, to keep her son alive out of guilt...but do nothing to bring the poor, crying boy who watched his mother struck down any comfort.

Or, and this may sound totally batty—Snape could have channeled his version of remorse and avoided the feeling of reluctant responsibility for the boy into that of paternalism. Lily and James were gone, but Harry was not, which makes Snape the sole custodian of Lily's child, the father to Harry that James never was—and, in some respects, closer to Lily than Snape will ever be. (Note: The loss of any familial figure for Harry is a reoccurring theme in these books. Think of how lovely it might have been is Snape could have been a protector, not a tormentor.) And, yes, that child was a spitting image of its father—his enemy—but one does not get to pick and choose the pieces of a person you get to love. Conditional love is not an admirable trait. Even when Snape tries to help, he causes irreparable harm, like this immensely hypocritical statement:

"Fools who wear their hearts proudly on their sleeves, who cannot control their emotions, who wallow in sad memories and allow themselves to be provoked this easily—weak people, in other words —they stand no chance against his powers! He will penetrate your mind with absurd ease, Potter!"

The real issue with Severus Snape is that any good he did—and markedly, he did put his life on the line—he did because he had to, not because it was right. Whereas, all the good Harry does, he does because it is right, and not because he had to. The two stand on drastically opposite ends of the spectrum, as dualities are a concept that particularly interests Rowling. Many might say he could never let Harry know that he was on his side because of the mind-link that Harry and Voldemort share, but imagine if Snape had be kinder to Harry, he might have been able to teach him occlumency. But similarly, if Snape didn't want to be thought of warmly, or if he truly didn't care how Harry considered him, then why, at the last moment, did he burden Harry with the truth of his love? And supporters might suggest that Snape must keep his cover, which begs the question: Why would Snape ever truly want to make his allegiance to Voldemort known? To co-sign on Lily Potter's death? And, perhaps the most interesting question: Did the good Snape's double-dealing do outweigh the bad? (Remember, Snape did goad Sirius into feeling useless...)

In the end, though, Dumbledore was right to trust Snape. Not because Snape was particularly trustworthy—and certainly not because Dumbledore liked Snape (I don't think he did)—but because of Snape's ability to play both sides. His hatred of Harry was real, he despised the Order, and he had no real interest in protecting the magical community, but he played the double agent because of his vendetta against Voldemort, the man who killed his beloved, a man he never stopped respecting. Snape played both parts well because he never had any real loyalties in the first place. Guilt tied him to Dumbledore, hatred kept him bound to Voldemort, and in the end, he did no more than kept Harry alive. Which may be a kindness, but it certainly isn't remarkable, and it doesn't mean Severus Snape is brave, or as brave as Lupin, Tonks, Mad-Eye, or all of the others who gave their lives for the cause.

This is the magic of Harry Potter: These characters will always be worth of a discussion and their motivations can be reassessed, again and again. Even though, in the end, Severus Snape is a huge jerk, and his redemption is never truly justified. *mic drop*